As you can probably see in the videos that we’ve attached above. We received a Razer BlackWidow Chroma 2014 edition keyboard from one of our friends which said that this was their kids keyboard. Apparently he plays lots of “accounting of the dead” and “Minecraft” which obviously requires a $150+ dollar keyboard in order to do it right. Who are we to judge right? :D All keys on this keyboard were fully operational except for the “0” key and the “.” key on the numeric keypad. All of the RGB lights including the “0” and “.” on the numeric pad were operational. When pressing on the keys I can hear the click of Razers mechanical switches. and the lights are all operational as you can see in the video above but when switching to reactive mode “0” and “.” never fired. Well, only one thing to do, lets tear this apart. 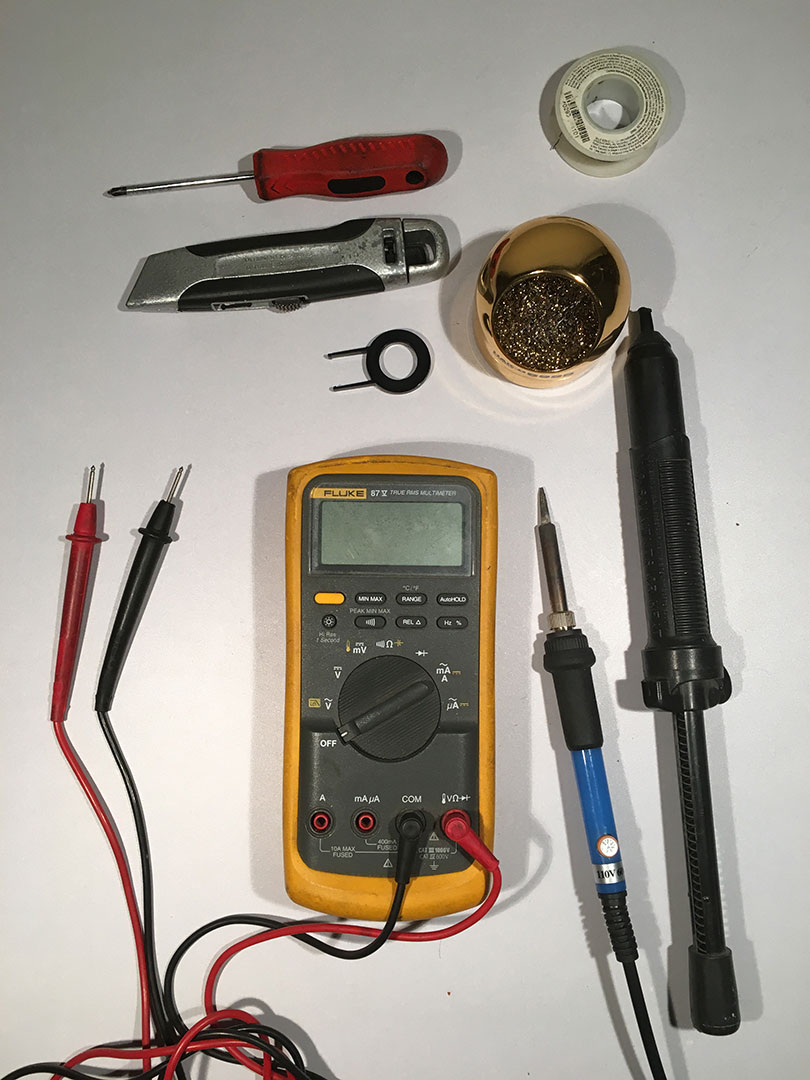 To open the keyboard you will need the following:

For testing you will need the following:

For repair you will need:

Items not shown but handy to have:

Disassembly of the Razer Blackwidow 2014 keyboard. 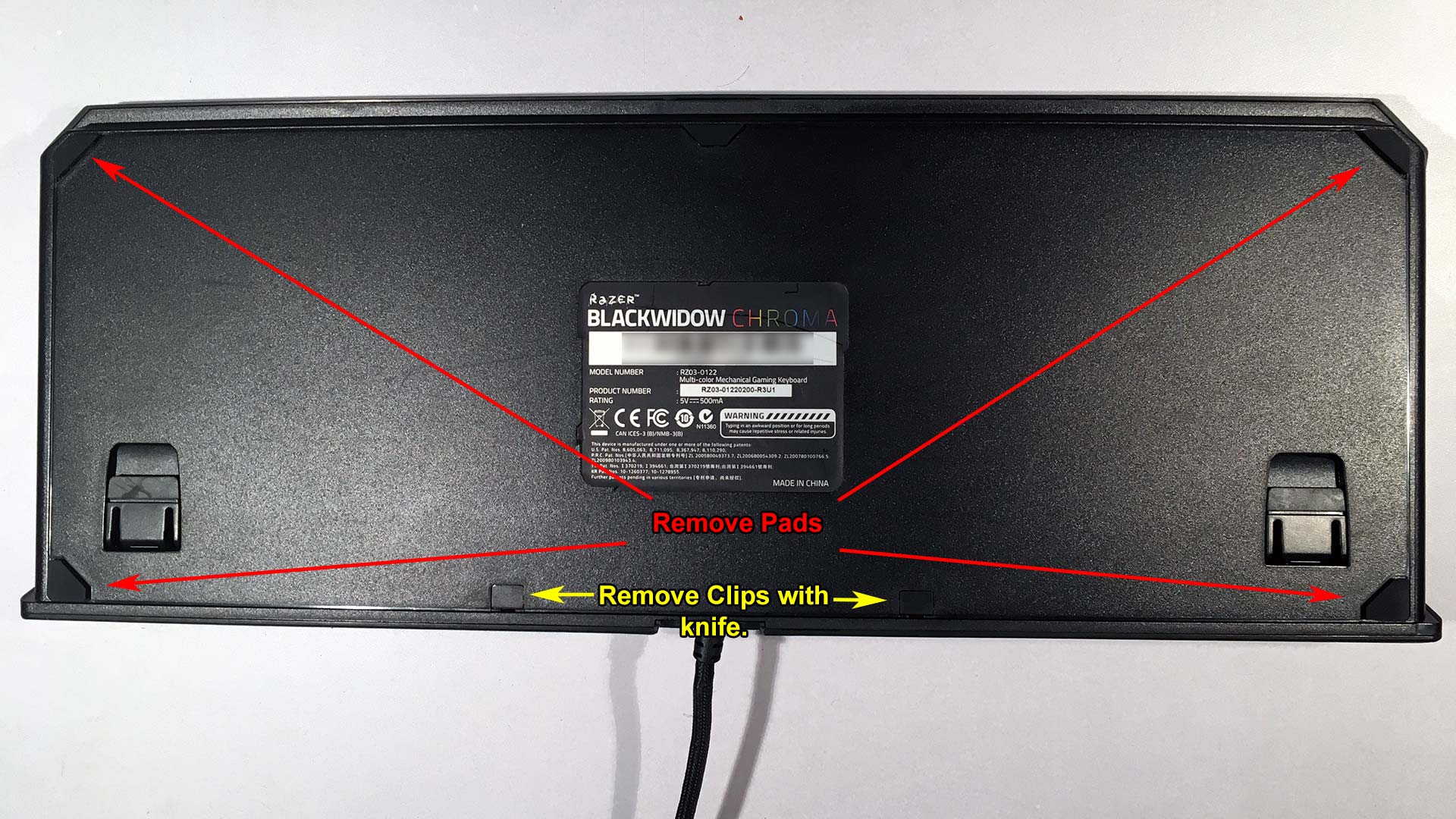 Start by flipping the keyboard and removing the four pads in the corners with your fingers. Start slow so you can keep the adhesive material on the pad so you can re-use them once we are done assembling. 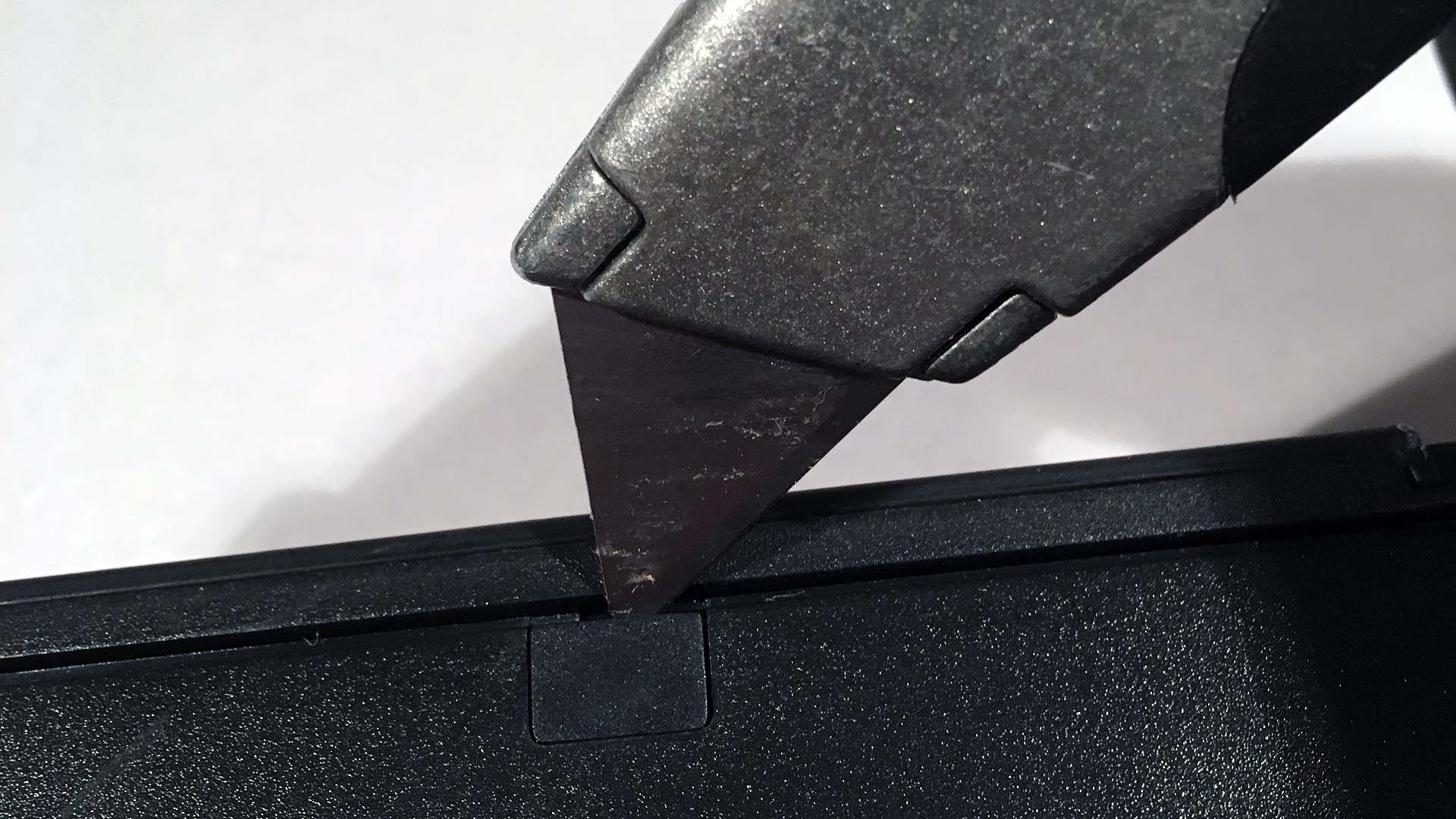 Using a box cutter of knife you can undo the two plastic clips that guard the upper two screws on this keyboard. Be gentle as you pry up on this as the latches can break easily. 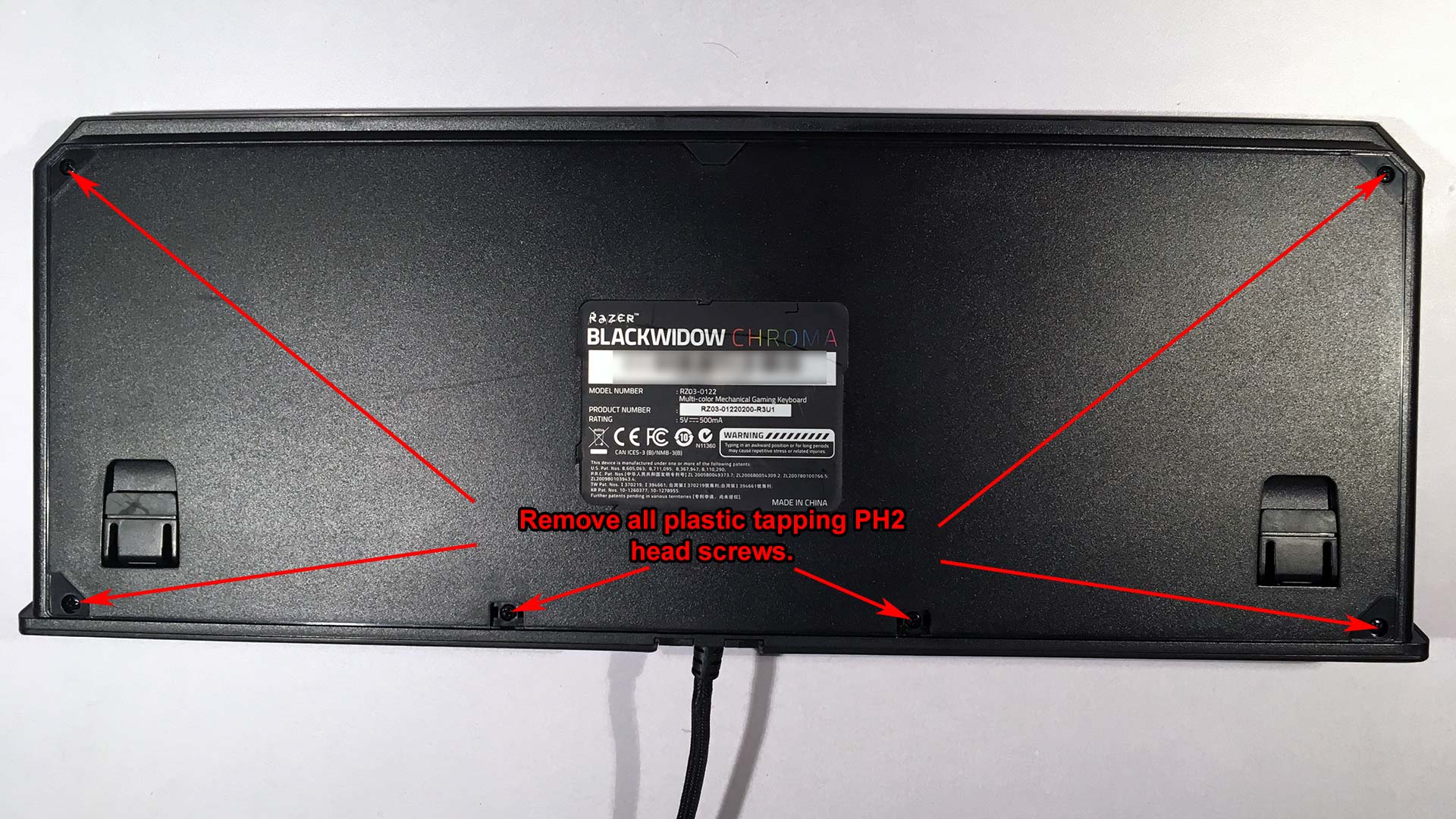 You can now remove the six plastic tapping screws on the bottom of the keyboard. 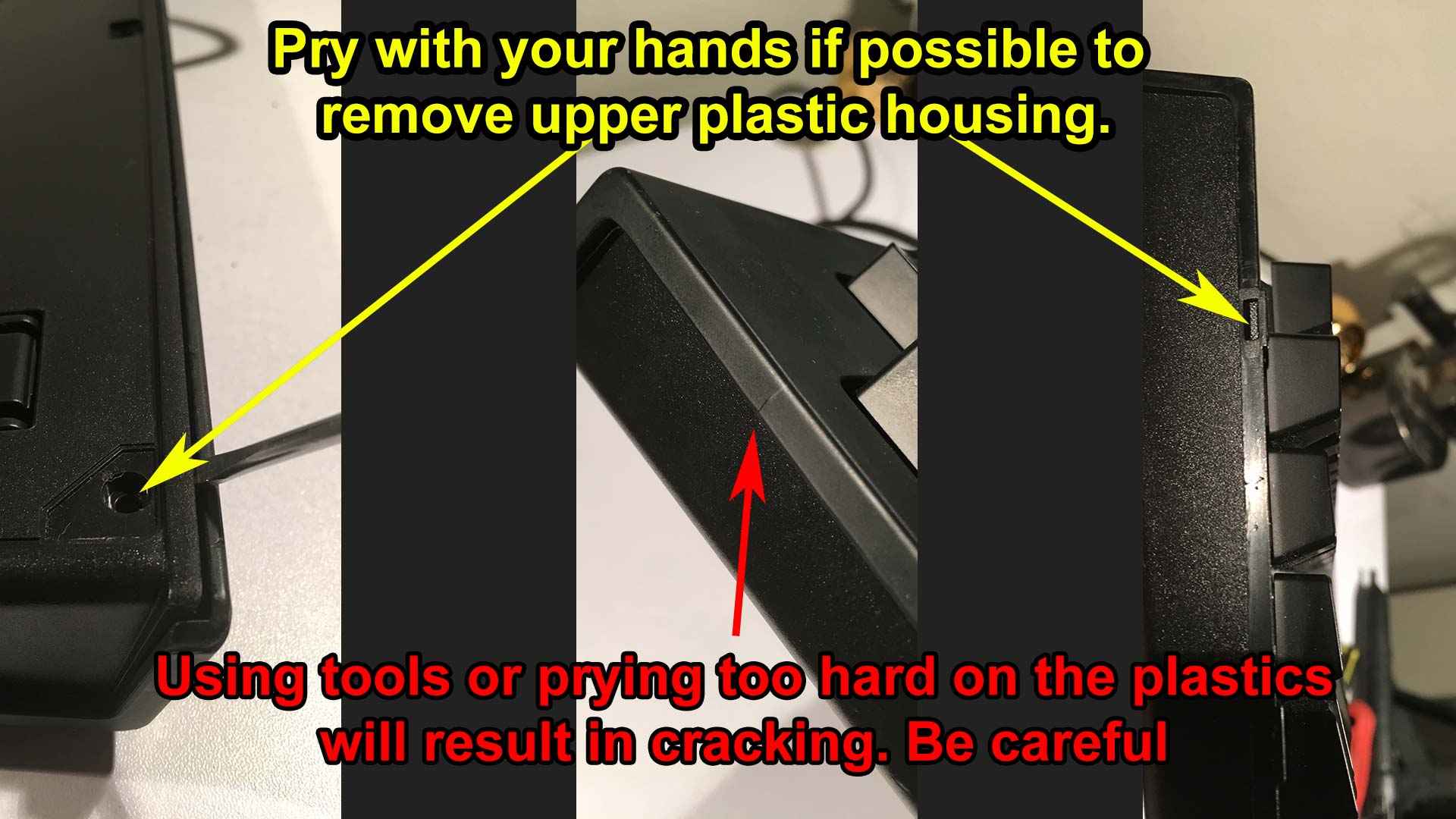 This is the most annoying part of the disassembly procedure because as you can see. I screwed up! Razer uses two interlocking plastic clips on each side of the keyboard. With enough time and effort, you can pry these clips apart using your fingers. If you pry too hard on one side or start to use tools, you’ll get damage like you see above. This is actually poor engineering on Razer’s behalf because even though I understand why the plastics clips exist which is to pass certain FCC testing. This makes these keyboards much harder to service and keep going for years to come. Thankfully this is a free repair and I don’t think that kid is really going to care about a hairline fracture on the side of his board. As long as his keys are fully functional. Lets keep going. 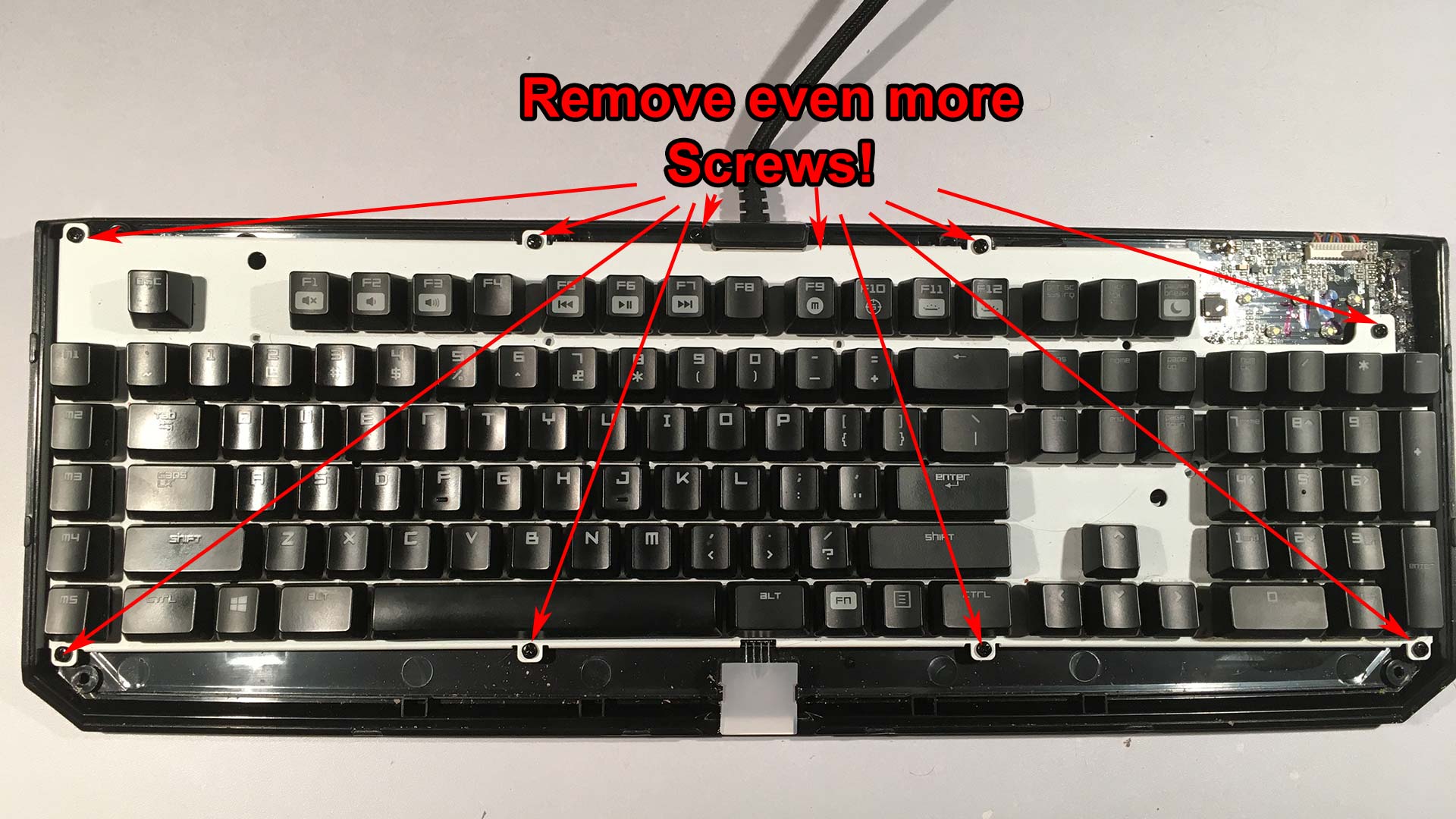 We got about another ten screws to remove. Eight around the keyboard assembly, and two that hold the cable clamp in place. As a note, all of the screws are still plastic tapping PH2 head screws which means you don’t have to worry about mixing types and sizes of screws. 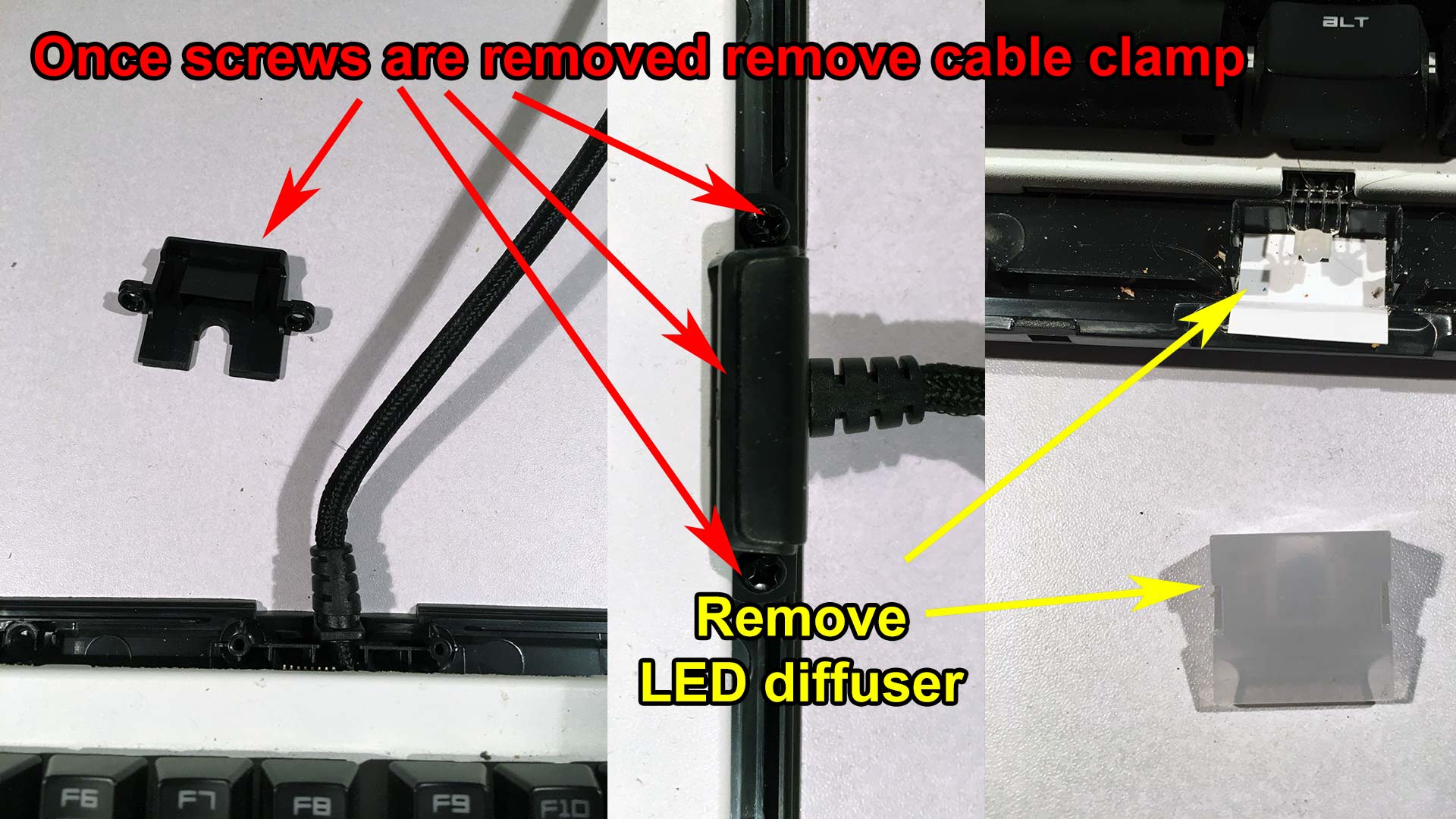 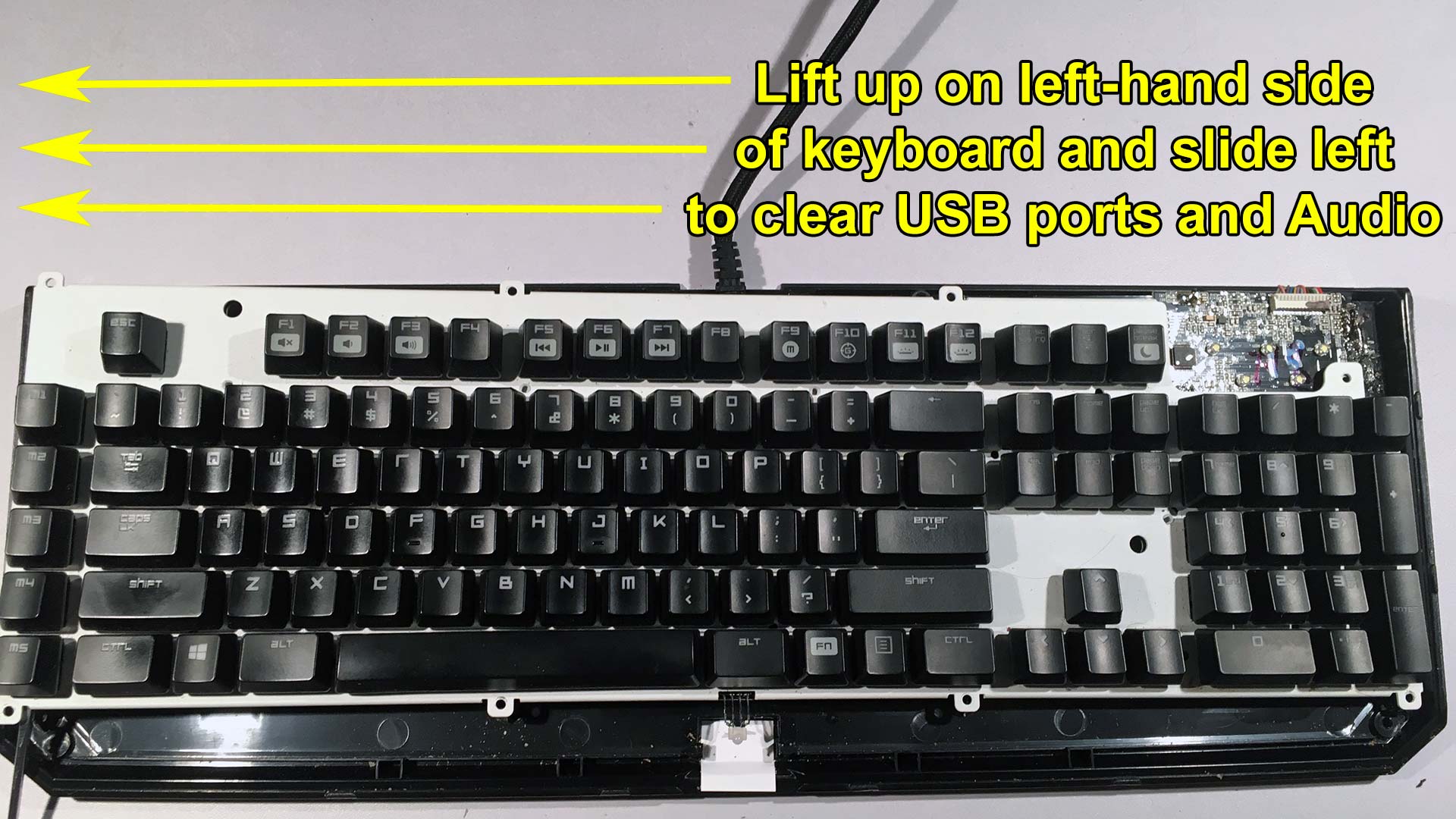 It should be noted that if you just wanted to clean your keyboard this is about the point you would stop. But we have to bad keys to check out so we’re going to keep taking it apart. lift up on the left side of the keyboard and slide left in order to clean the USB port and the audio ports that are mounted on the right side of the keyboard. 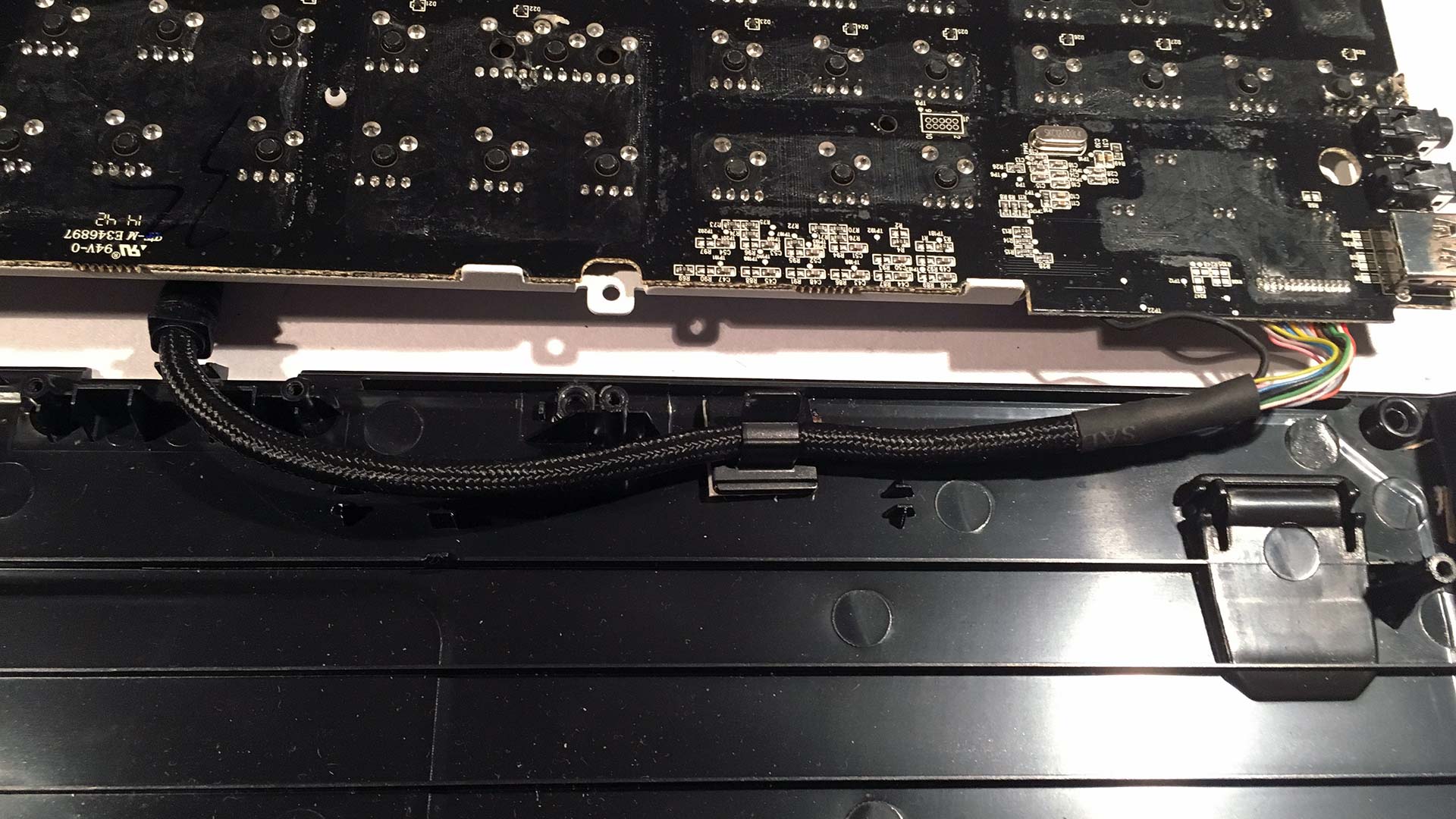 The last thing you want to do before your board is finally free from its lower casing is to flip the keyboard over and remove the cheap-ass cable management clamp that Razer put inside (Seriously guys? Double-sided tape?) And from here we can now inspect the board. 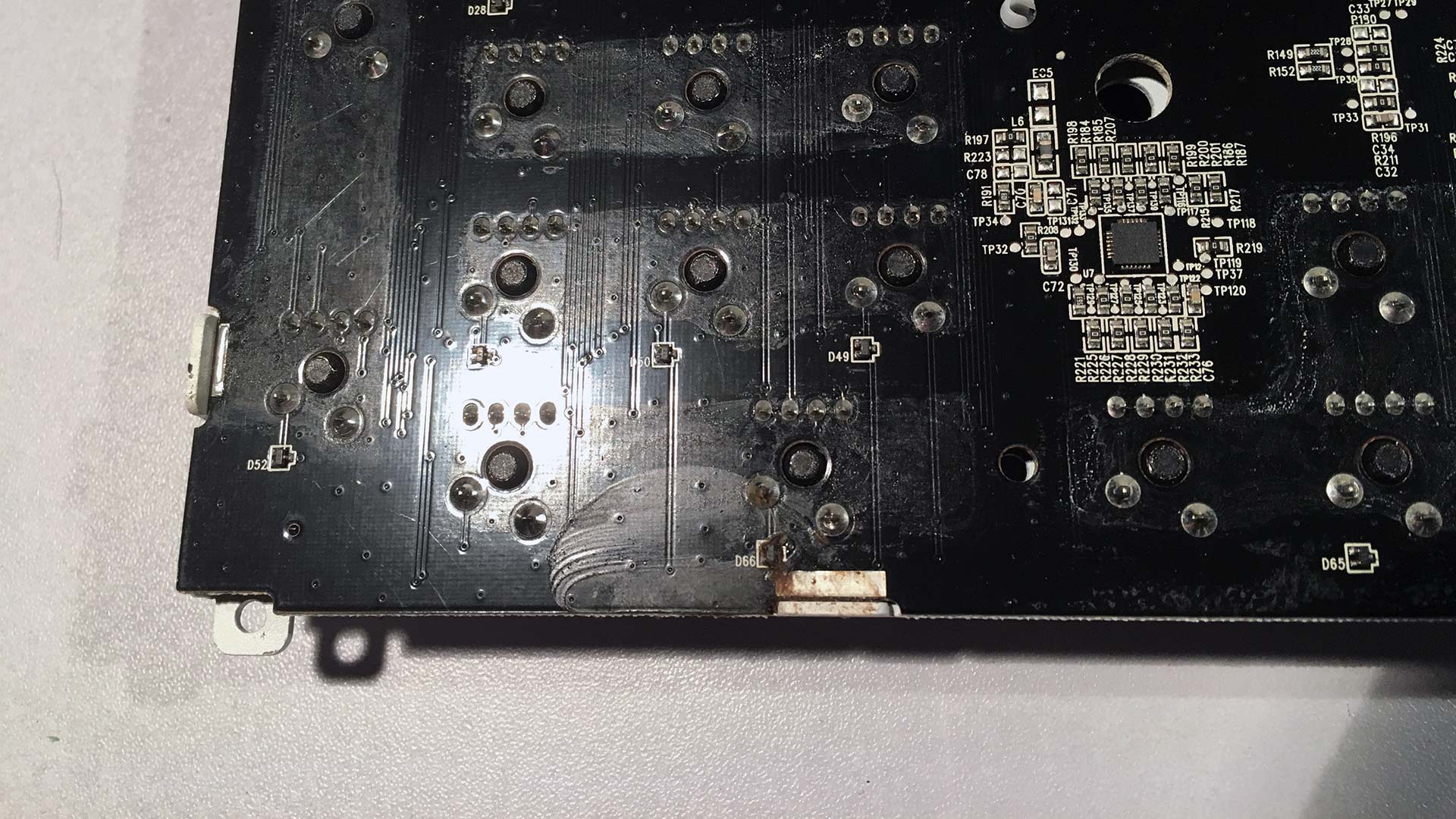 Now that we can see the board we immediately found out why this “0” and “.” key failed. Liquid damage. someone dropped some soda onto the board and it leaked around the protective plate on the top and got around to the back of the board. Rather than turn off the keyboard and let it dry most users probably just dry the top and keep going. There’s corrosive damage all over D66 and even on one of the mechanical keys. 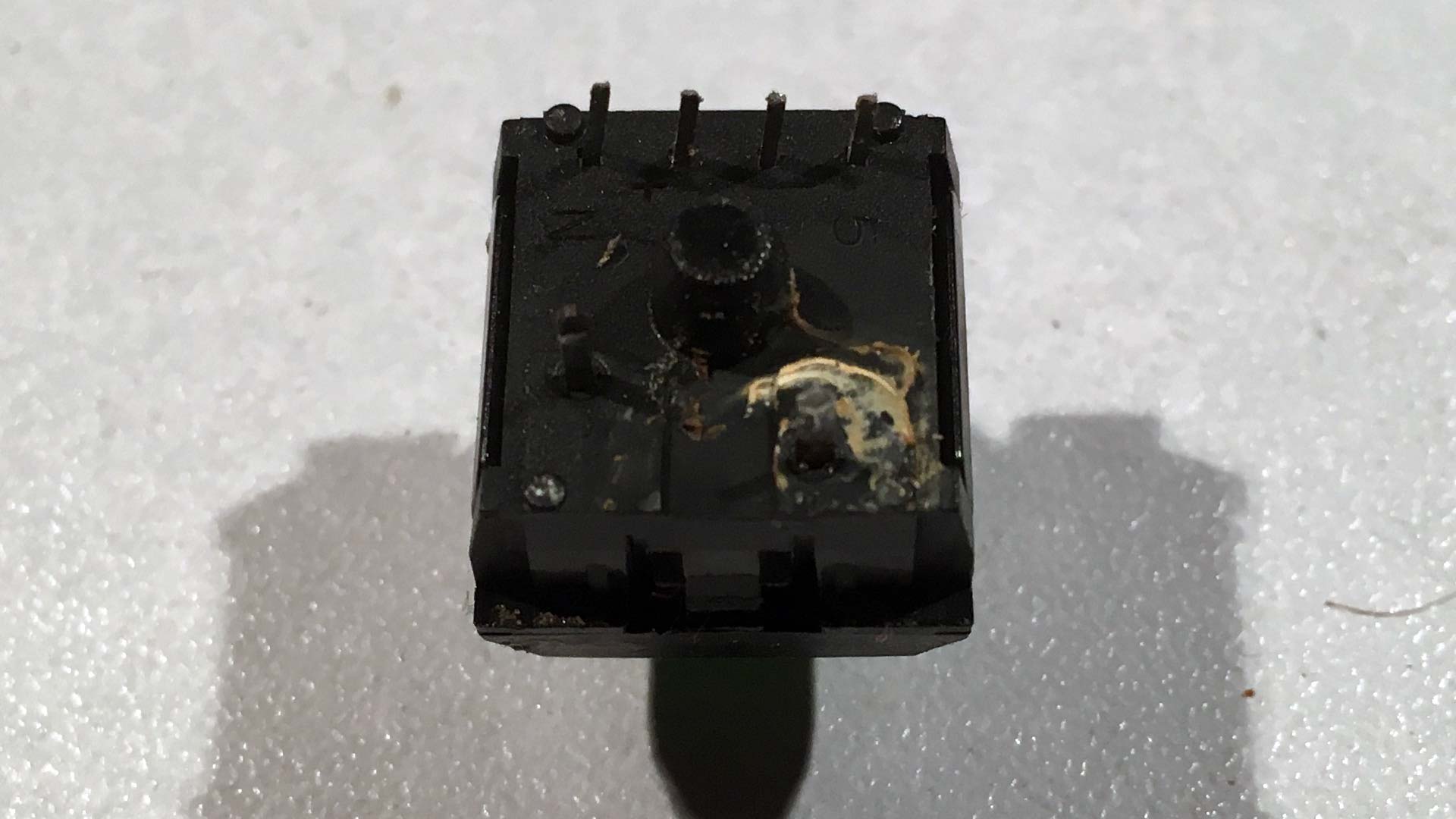 I decided to extract the mechanical key that had some of the corrosive damage. I didn’t really need to since the two larger pins is the switch itself and the continuity test passed without a problem on it. But the liquid damage did seep upwards into the key so i decided to replace that key just to be on the safe side.

When Razer first introduced their gaming keyboard they didn’t go with cherry MX switches like everyone else in the market. Instead, they went with a Chinese company called “Kailh” to make their custom micro-switches. The quality of these switches was not good and typing on an older razer keyboard can feel inconsistent. The clicking and there was also a higher failure rate of the switches. Razer took a lot of heat from the gaming community about this and after 2014 they switched from the Chinese manufacturer “Kailh” over to “Greetech”. Razer did this without really making any announcement about it (Which I hate, at least admit you screwed up!) So far, the Greetech switches are holding up just fine. In the latest edition of the Razer Blackwidow Chroma “X” edition. There is now the option to choose either Greetech orange switches or Cherry MX Blue switches. Razer going back to the standards of other mechanical keyboards using the Cherry MX standard. Instead of being the unique flower in the business. That’s not a bad thing! Cherry MX switches have the highest of standards about them. Because of that, there are so many Chinese companies out there mimicking them since Cherry does have such high standards the cost on a per-switch level is also high. I kind of covered this on my gaming from the past to now blog for those who want to check that out. Back to the repair.

The Kailh switches apparently are just fine. Now what! 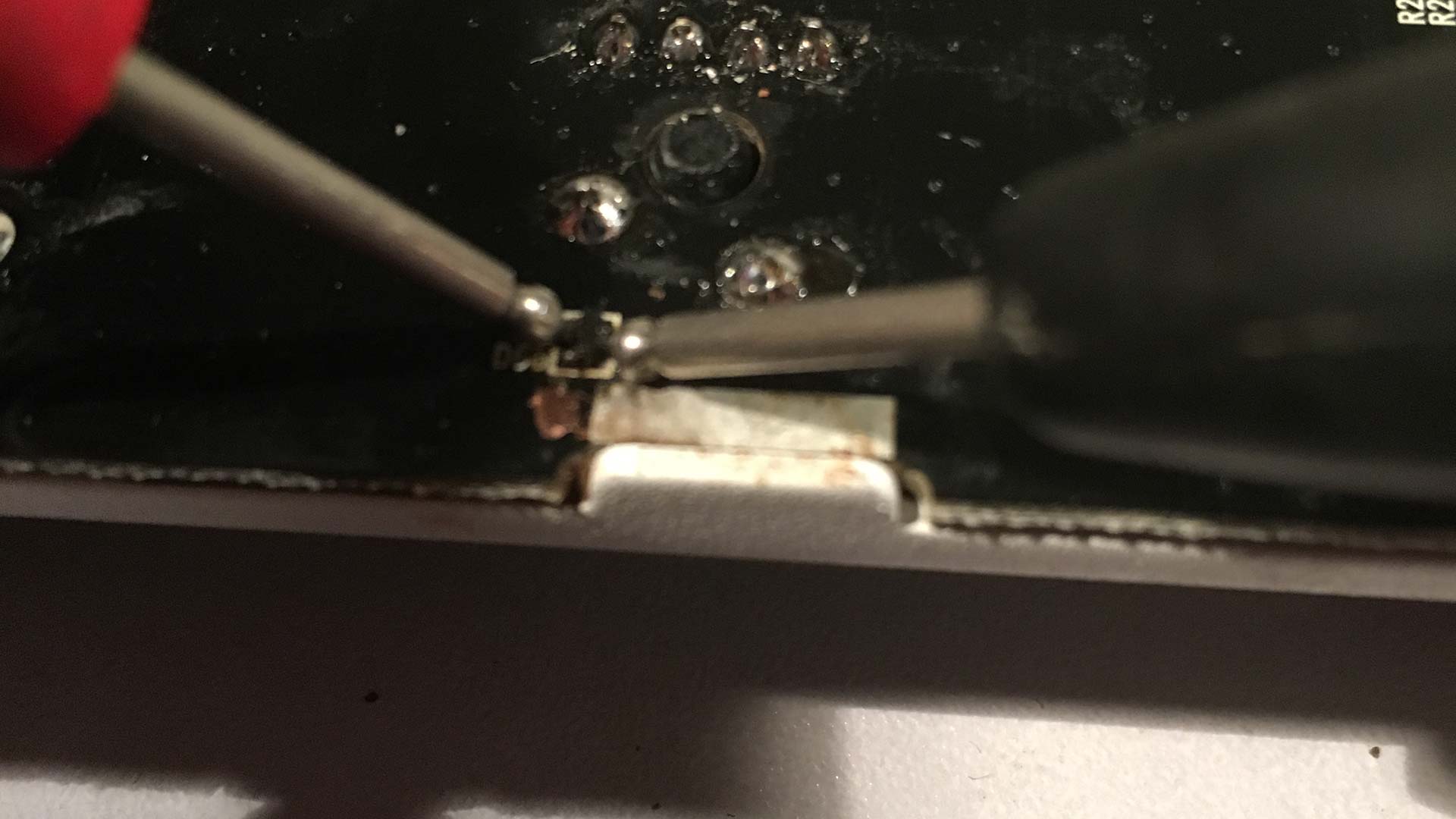 Okay, so we put back the mechanical switch and now we’re going to clean up all of the liquid damage that happened with denatured alcohol. Now how did I find out that tiny chip no better then the tip of a pencil is actually a diode? Well, ignoring the silkscreen of the board which states “D66” which D usually means diode, Q means transistor, R means resistor, etc. I can also verify that it does indeed act as a diode by going to a neighboring chip such as D49 right above it and doing a continuity test. Which it passes by giving my resistance of around 540Ohms in one direction and 0 if we reversed our probes.

If you take a magnifying glass and look at the neighboring chip all it says is “A4.” Wow, not a whole lot of information to go on! Okay, typing in “A4 diode” into google actually got me exactly where I want to be. That this chip is what is known as a “Diode array” SMD chip with two leads heading off of it. Guess where the two leads go off to? If you guessed the “0” key and the “.” key you win at least one internet!:) So for every two keys, there’s one of these chips governing over it. This is good to know in the event you just have a pair of keys that don’t work instead of just one or two keys. As for exactly WHY is there a diode there. There could be many reasons for this. It could be for reverse polarity for the controller chip. Or it could also be as a safety so the controller chip does not send ghosting keystrokes in the event of a high electrostatic charged room. Either way that chip is gone!

Now, I could order DigiKey part number 2156-BAV70W-ND manufacturer part number BAV70W and do it the right way by SMD soldering on a new one. But guess what? The kid wanted his keyboard back right away (same day)! I know, shame on me for not having parts. Real men carry parts for everything. I did actually have some BAV70’s but those were 0.5m too large and the soldering job was not stable with a chip of that size. 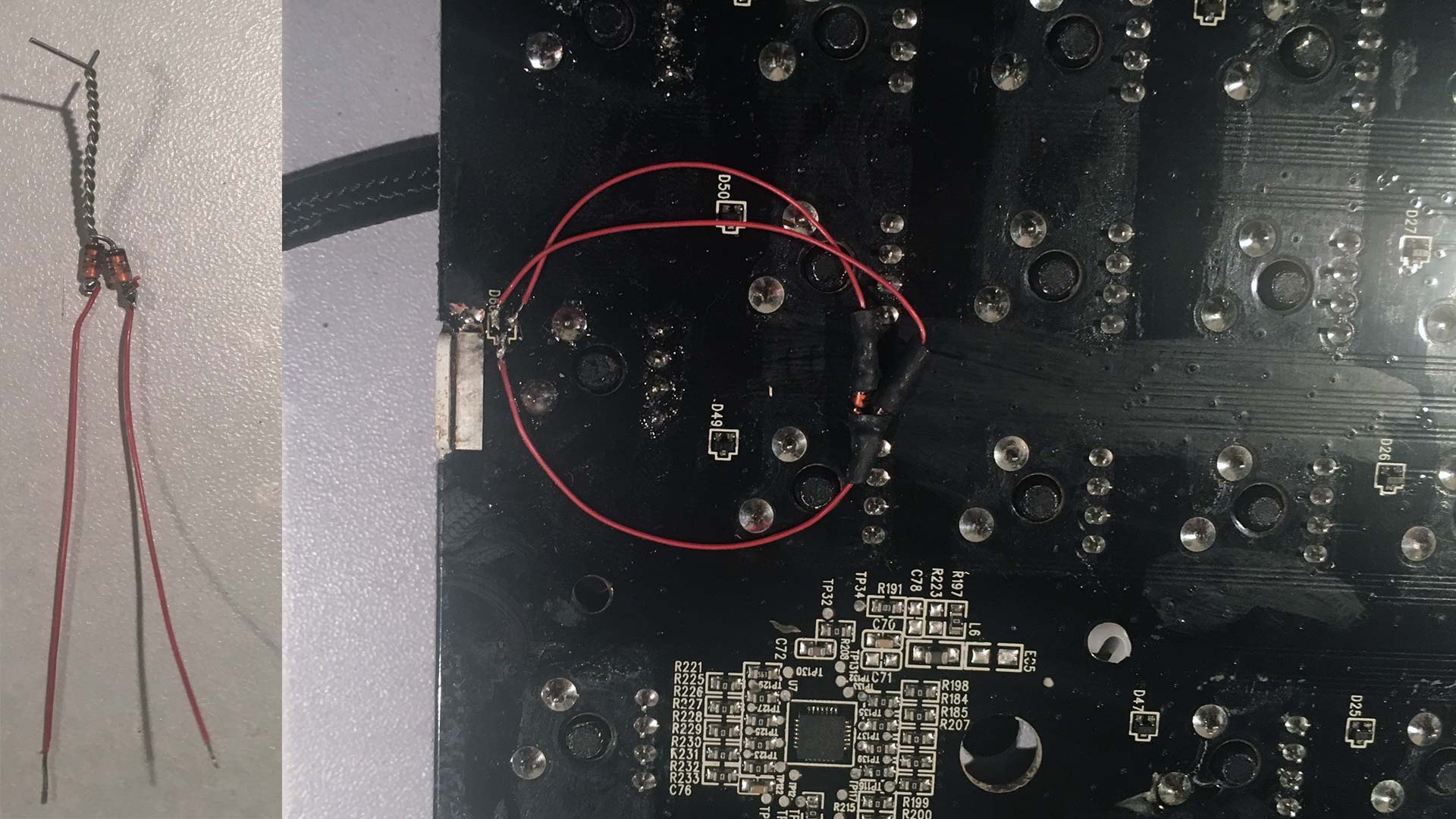 Alright! McGuyver time! If you look at the BAV70 it’s just two diodes with the cathodes tied together and the package shrunk down to the size of a pencil tip! So I used 2x 1N4148 with a max current of 200mA and a reverse current timing of 4ns which is identical to what the chip is doing. These diodes and tracer wire you can get at any radio shack if this happens in the middle of a LAN gaming tournament and need an emergency fix! With some tracer wire magic we were soldered in and ready to be buttoned back up. I didn’t have to worry about the size of these diodes as even with the electrical tubing it’s no taller than the mechanical switch stabilizer plastics poking through the board. On top of that the lower ABS frame of the keyboard has some room to spare. So no worries about crushing the wiring or the diodes.

Does it even work?!?

Video of after the repair is uploaded. So, you tell me.

I was rather disappointed with the overall repairability and quality of the Razer keyboards. I expected better out of a company that holds the slogan “By gamers for gamers” because they of all people should know Gamers are brutal people towards their hardware. Razer should at least anticipate that with better ways of cleaning the hardware. Also, a simple foam or rubber gasket lined along the bottom of the keyboard could’ve prevented the damage in the first place. It’s a little apparent that Razer is all about marketing and realizing they have to update their hardware to actually back up their claims. But then again, perhaps I’m not a hard-core gamer so I simply cannot possibly understand the level of awesomeness that is Razer. 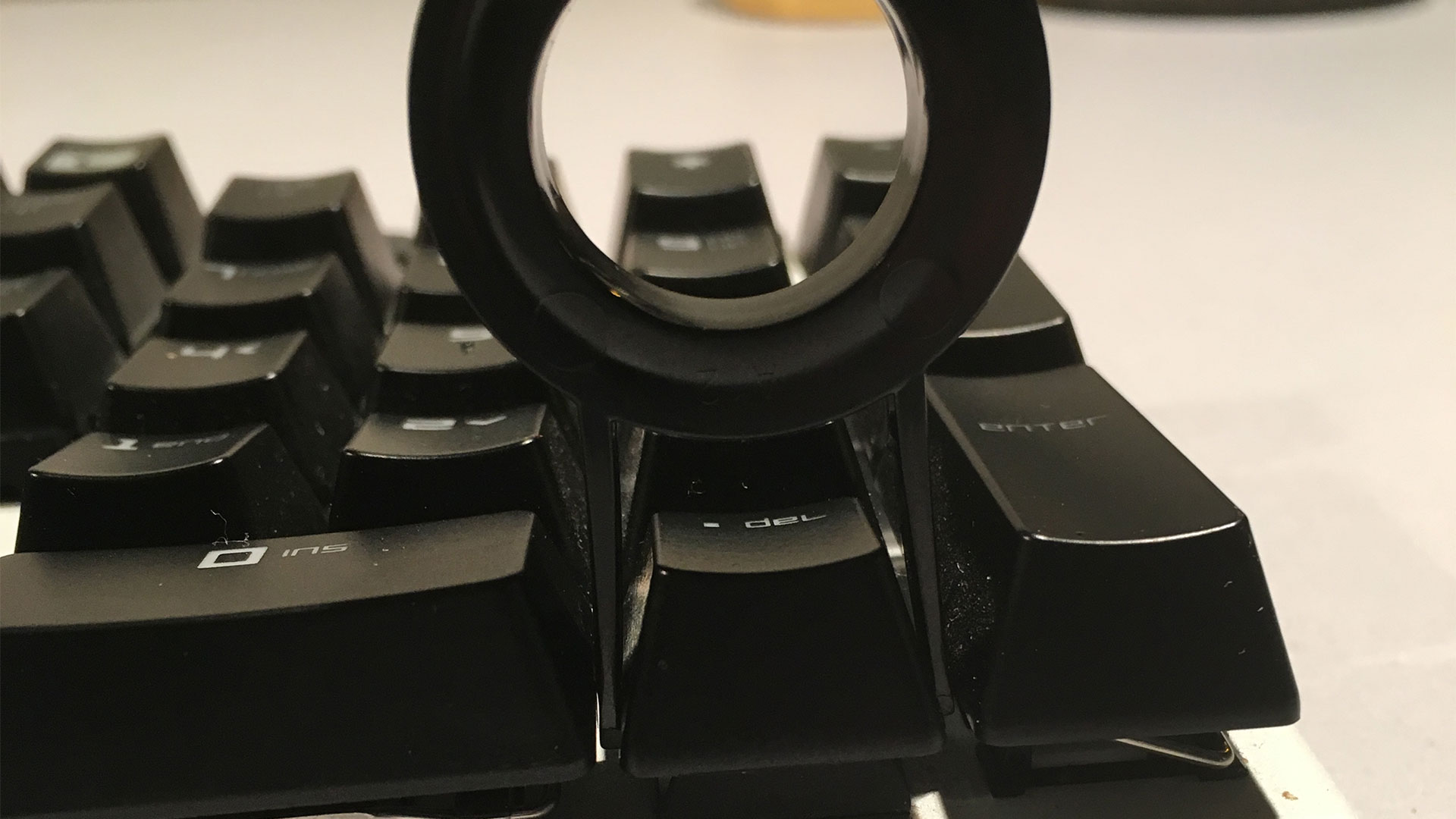 Overall the repair would’ve been a lot easier if I didn’t deal with an impatient gamer which wanted it done for free because their mom “knows a guy.” Ohh well, it’s working and it’s time to move on to other things now. If you have just one key failing. It’s probably a bad Kaith or Greetech key. If your keys are failing in pairs. Now you know it’s a diode array issue. Stick a key extractor into it. It’s done!

That’s all server has to say for now. Until next time.