Webrings in the past.

Bloggers, Artists, Writers, Developers, and Musicians would often be part of a “Webring” which is a group of links that can take the reader away from their site and over to someone similar. If the webring was big enough and certain people a part of that ring; The webring brought in a lot of traffic benefiting others. It was a very Niche thing that a community can get together and build up.

During the start of the internet (approximately the early 90’s or so) search engines weren’t what you call big and overreaching as they are nowadays. When you searched for something on the internet search engines of old often would only care about the baseline result of an absolute match. Not necessarily the subject of the context of the search. For example, if you searched for an artist’s name. You may get that artist which does something you really like, but you may also get random people that are similarly named to the artist you were looking for. 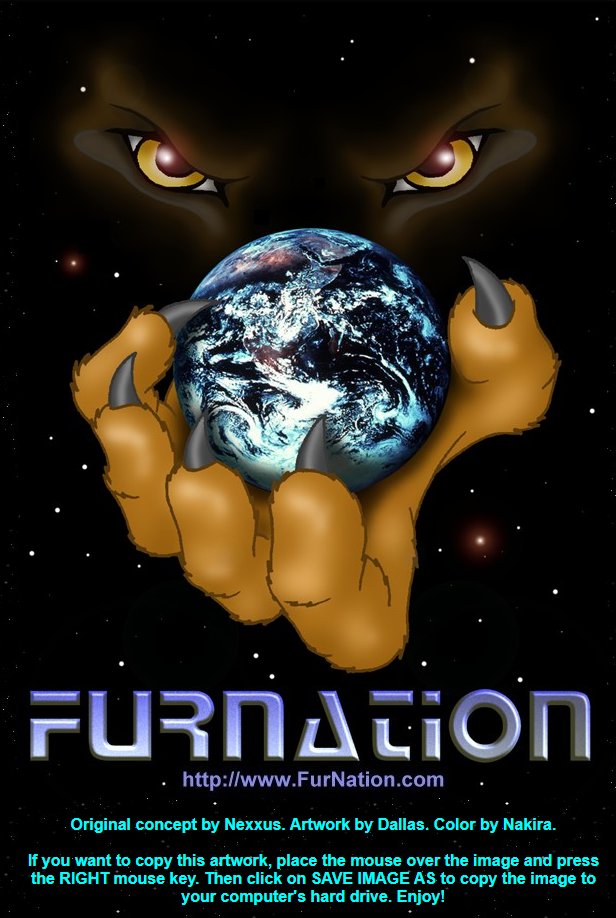 Danm, just them explaining how to save their company image on your hard drive just seems so fucking wholesome versus the crypto-bro/NFT hell of today!

FurNation for the furry fandom was -kinda- like Neocities for the fandom during its time. The only way you got onto FurNation was you had to know the guy, or you did work for the guy (had a magazine of the same name people got published in. They also had SecondLife SIM activity as well but that’s a different story entirely!) 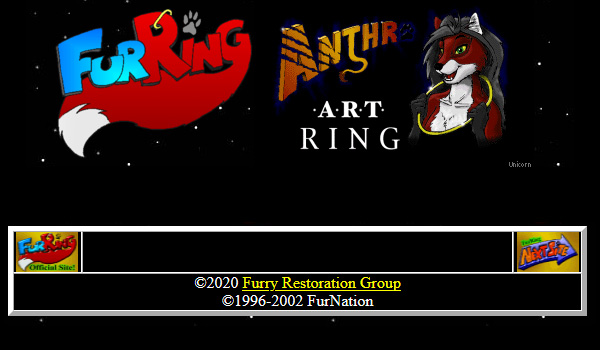 The picture above is an example of a WebRing from a fan base we were close with. This is what it looked like. Depending on the WebRing that you were with you had to post this HTML code on the front of your website to promote and maintain your listing within the WebRing. This can be problematic because your adding HTML code referencing to another site as well as demanding the web administration to practically inject advertisement onto their index.html is a threat to security as well as general web performance.

Administrators of websites would eventually say:

To this practice. We weren’t alone on this sentiment either. Which could contribute to the next topic at hand.

A lot of factors came into being that resulted in WebRing’s death. Search Engine technology got better. Social network art services like DeviantArt, and FurAffinity guaranteed instantaneous response versus waiting for months for someone to comment like what can happen on a Website. In general, social networks amplified this by having contact with everyone interested in your creative works in almost real-time. This isn’t necessarily a bad thing! Despite our past behaviors of shouting our manifesto to take back your data. We understand that hosting a website isn’t everyone’s cup of tea.

Web admins have had their own incarnation of linkage. In our case, it’s the Cellar Door. In which the cellar door was a simple list of links of individuals we knew or were inspired by. Some of the people on that page may or may not know that we were inspired by some of them. So to that end, it still deserves its own page.

Overall, everyone lost interest at least in the furry fandom which we were in! Fuck..

Sure, there’s ToR which helps combat censorship by offering a protocol around most firewalls. But Tor is just a protocol. Not necessarily a community.

Now, we suffer from a totally different problem. Which is servers and services are so big that it’s virtually impossible for a search engine to find your site unless you cover a very popular topic that a lot of people are interested in. Another problem that has been coming up more and more is net-based censorship. Either via the proxy of a large tech firm or governmental entities. Search results are magically being dropped off of engines because a website that only pulls in a few hundred people a day does not matter. Or, the website that only pulls in a hundred people is not advertiser-friendly.

It’s time for a rebirth.

S-Config will attempt to support certain Web-Ring communities, especially since it is believed how they promote/distribute their ring is right. So without any further delay let’s jump into some of those rings.

Apparently, the fandom we were into is going for another attempt. But unfortunately, for the same reasons as the websites of old described in this article. We can’t join the furry ring as it enforces the execution of javascript that isn’t controlled by the web administration. Sorry guys! But we’ll at least throw a link here for those interested in checking out said sites.

Based on the (/tech/ A.K.A. /Ω/) thread that exists on a forum of the same name. The objective is to encourage people who are tech-savvy to design their own websites and show off their own creative works. We agree with this completely and hence this particular Lainchan Web ring will be promoted here.

The only thing that worries me about the Lainchan group is there are a lot of Neocities accounts going on within the Lainchan webring. It’s free! Neocities has a fantastic community that promotes its own sites! Totally get it! But just worried if that ISP goes *poof* it takes out so many of the sites below.

To us, they’re doing everything right. They are not forcing the administration to ‘push’ the WebRing to the front of the page. No strange code injections. None of that. In many cases, these web admins replicated from one of the contributors of the “Concealed.World” git-hub. But it’s been offline for some time so instead, we’ll try to do this by hand here.

We had some time to think about this……

It makes more sense to have ALL of the links on the website on one page. Thus, we’ll be demoting the webring page to just a blog entry. The page is still valid as it goes go through the history/death/rebirth of webrings and the state they are in. While consolidating rules of link posting between my trusted links, my Tor links, and finally the newly added Webring links.

Right on. With some recommendations in our contact us area. We posted our website to be added to the webring on Lainchan. And well……. That’s it!

There isn’t really any administrative approval of mechanism in place to give a thumbs up or down if you have been accepted. You do it and it’s up to the website admins of each site to add you.

Unfortunately, we’re coming a little late to the party and thus only websites that regularly update their webrings or websites that are fairly new will add us to their site. Or websites that don’t want to add us at all which is kind of the beauty of this webring! It doesn’t force you to accept everyone. Because we’ll admit it! There were two websites within the Lainchan webring we just didn’t add because to be blunt there was nothing redeemable on those two sites. Lainchan is an anonymous board so naturally, you will have people who will write up some HTML on Neocities just to throw middle fingers at everyone. In which we golf-clap and move on.

It’s unfortunate that during these darker times on the internet; Where there’s censorship, contamination, and exclusion of search engines where that claim to have millions of entries yet will only show you 300 of those entries only to abruptly stop. That the old way of promotion and communication about not only your website but others like you is coming back from the shadows again. It should have never gone away in the first place! Perhaps this is more of a social issue that we are facing in humanity as a whole. That the more connected we are the more we are alone. A false vacuum created in part by social networks as the assholes who run them.

This level of isolation does have one tiny perk though. By being alone you can find your own individualism creating strength and finding a weakness. If you can survive this then you will come out the other side as a totally different creature than what you are today.