For those who do not play much on eBay there was a lot of issues with purchasing controllers for the PlayStation 3 in regards to china making a ton of knock off controllers. These third-party or P3 controllers looked like a Sony PlayStation 3 controller except that if you ever picked one up and start pressing the buttons or pushing the analog stick around you know that there is something not quite right with them.

Fake controllers on the PS3!

Will the “P3” controller work on the Sony Playstation 3?

The official statement from Sony

Originally on http://us.playstation.com/news/consumeralerts/ that has now been removed for a redirection for users to buy a Playstation 4 reads as follows:

To explain why you have to put yourself into the shoes of Sony:

Due to the landslide of support issued generated by the gaming community a final “fuck you!” to these third-party controllers was issued by Sony. These controllers are now blocked in version 3.50 or newer of the PlayStation 3 firmware. If you are running unlicensed firmware there may be a way around it for those PS3 users. But from an official level this update renders the P3 controller useless. 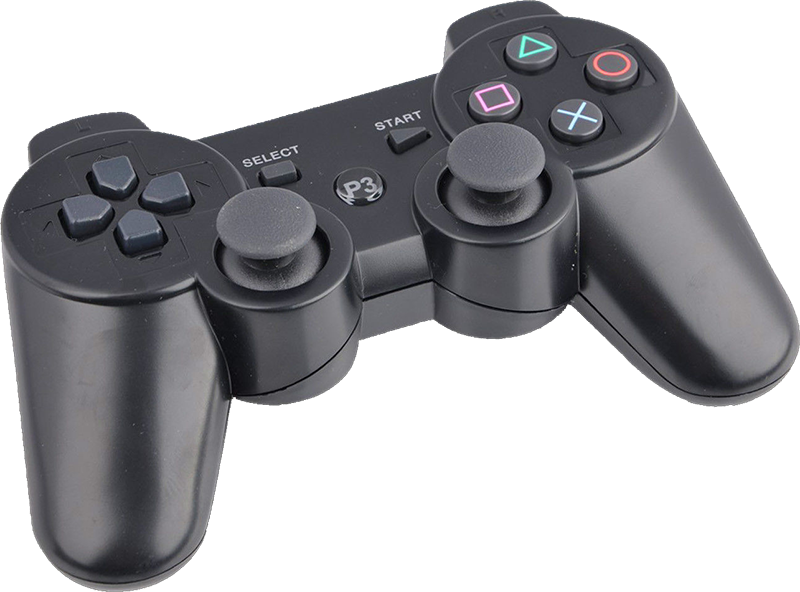 What china eventually did is they simply got honest with what they were making! That it’s just a third party controller and they removed any logos from it stating it’s an official Sony product. Hey! better late then never right?!? With the lock-out of these controllers on the PlayStation 3 and the release of the PlayStation 4 with its new controller what is going on with eBay is that there is almost a fire-sale going on with these controllers where you can purchase one of these third party controllers for as little as $10 which versus the now current $30-40 for an OEM PS3 controller. But what can you do with them? Well, you can use them on PC’s with a Bluetooth adapter and the right software.

Fake controllers on the Ouya?

Or you can use it on your Ouya as an inexpensive gaming controller! The Chupacabra update may have something to do with these controllers working once again. Because in earlier posts on various Ouya forums out there they were reporting that these controllers were not pairing at all. However, I have had success in paring these controllers to the Ouya.

For those interested in how to pair this P3 or PS3 controller up to your Ouya or any other android device. Click here.

Screen capture above shows in order , my bluetooth keyboard (for general web-browser activity), my Ouya Controller, an official PS3 controller model CECHZC2U. And the third party “P3” controller. Now how it puts the “-ghic” at the end, not sure what that means. Ouya can certainly tell the difference between the two controllers. I also like the spelling error in the “Conteroller”. I am fully aware that I’m no spelling God here. But if you’re going to misspell something why not “PLAYSTATION”? In term of gaming, I will provide a brief listing of games I have tried with it and will note differences between the P3 and an OEM PS3 controller whenever I can.

In summary from the list of apps that I decided to choose out of my Ouya library for the article a lot of third party controller support does not stem from the Ouya’s Android operating system as much as it has to deal with how the developers support third-party controllers on the Ouya. Early applications such as Stalagflight and Super Crate Box do not work because they were early builds that were just designed to work on the Ouya controller and that they had. That was it! Where-as some of the other devs which have built controller support into their apps for android phones and tablets actually work without issue.

How’s the build quality of the “P3” China controllers?

Lets go through a breakdown of the controller and I will try to put pictures side-by-side between the P3 controller and an OEM sony CECHZC2U controllers. I’m going to skip the first step of disassembly as they are both virtually identical with having 5 tiny plastic tapping Phillips screws and pry it open to get inside.

For those people who think they can buy P3 controllers to refurbish their PS3 OEM controllers with fresh and shiny plastics, I’m sorry to report to you that the P3 is drastically different on the inside to the point where you would require a lot of rotary tool work in order for it to begin to work properly. difference sized posts. and different clipping configuration. Also, note that the P3 version did not have any rubber insulation where you would go to unpair the PS3 controller or to simply reset the controller to stock. This is a little bit dangerous because if you use paper-clips like I do, you could accidentally scratch the board and trash the P3 controller.

The guts of the P3 and PS3 controllers:

This is where the meat hits the metal and you really begin to see the difference in quality between the two controllers. the usage of clip holders for the lithium battery versus the sticky tape on the Chinese one. the lack of support notches in the Chinese one which makes it very simple but also controls was very soft on the P3 controller. Unlike the Ps3 where controllers felt solid whenever you press the d-pads or buttons. 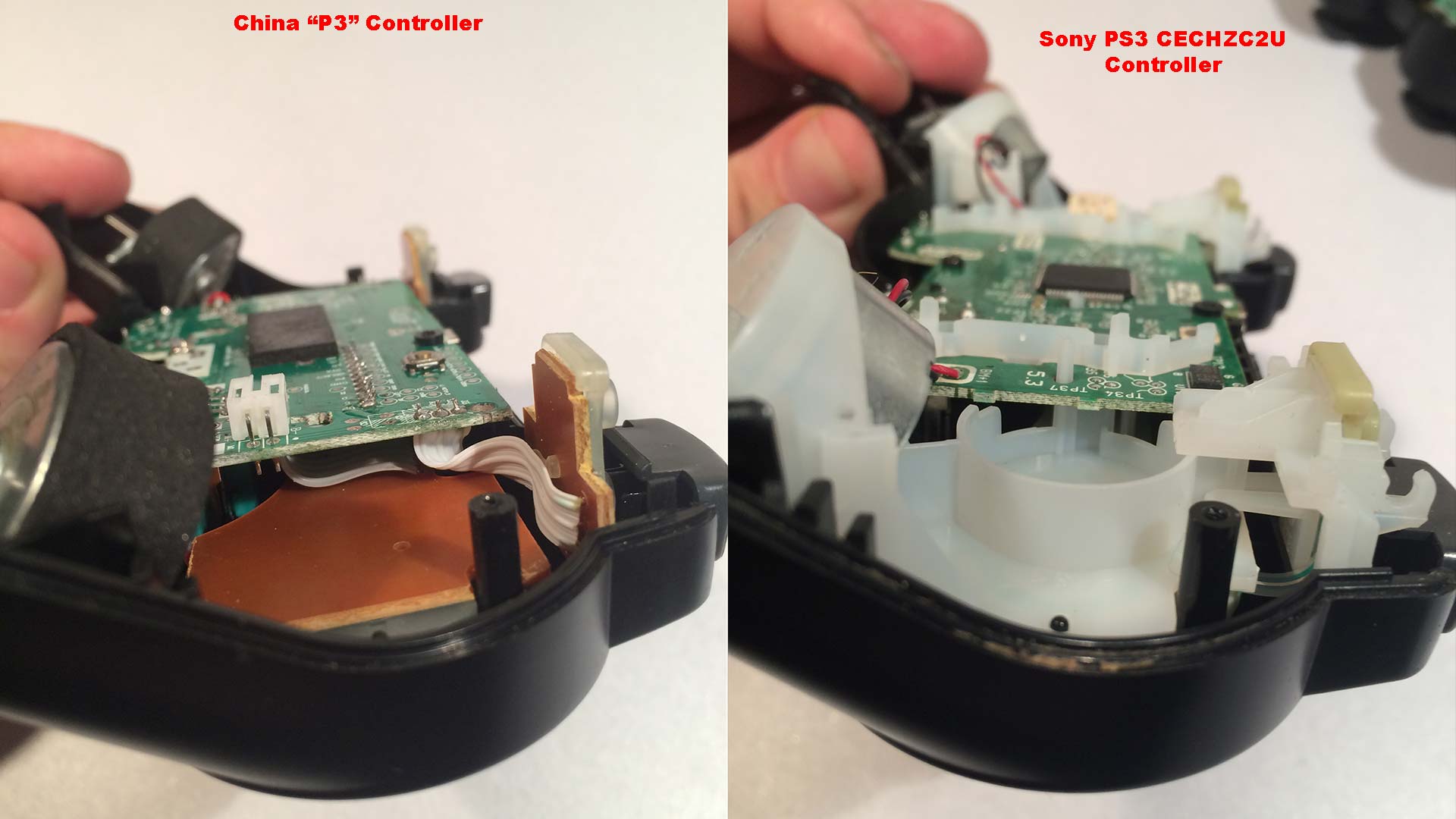 When tilting this to the side you really begin to see why the “P3” feels softer and more flimsy then the PS3. It’s because there’s virtually no structure to keep anything in place. The P3 controller is relying %100 on the outer-shell to be intact and all of its screws in place. It has no extra filling for where the d-pad or player buttons are and as a result, the PCB Board will flex as you press those button, causing a no-hit or worse still a miss-fire. 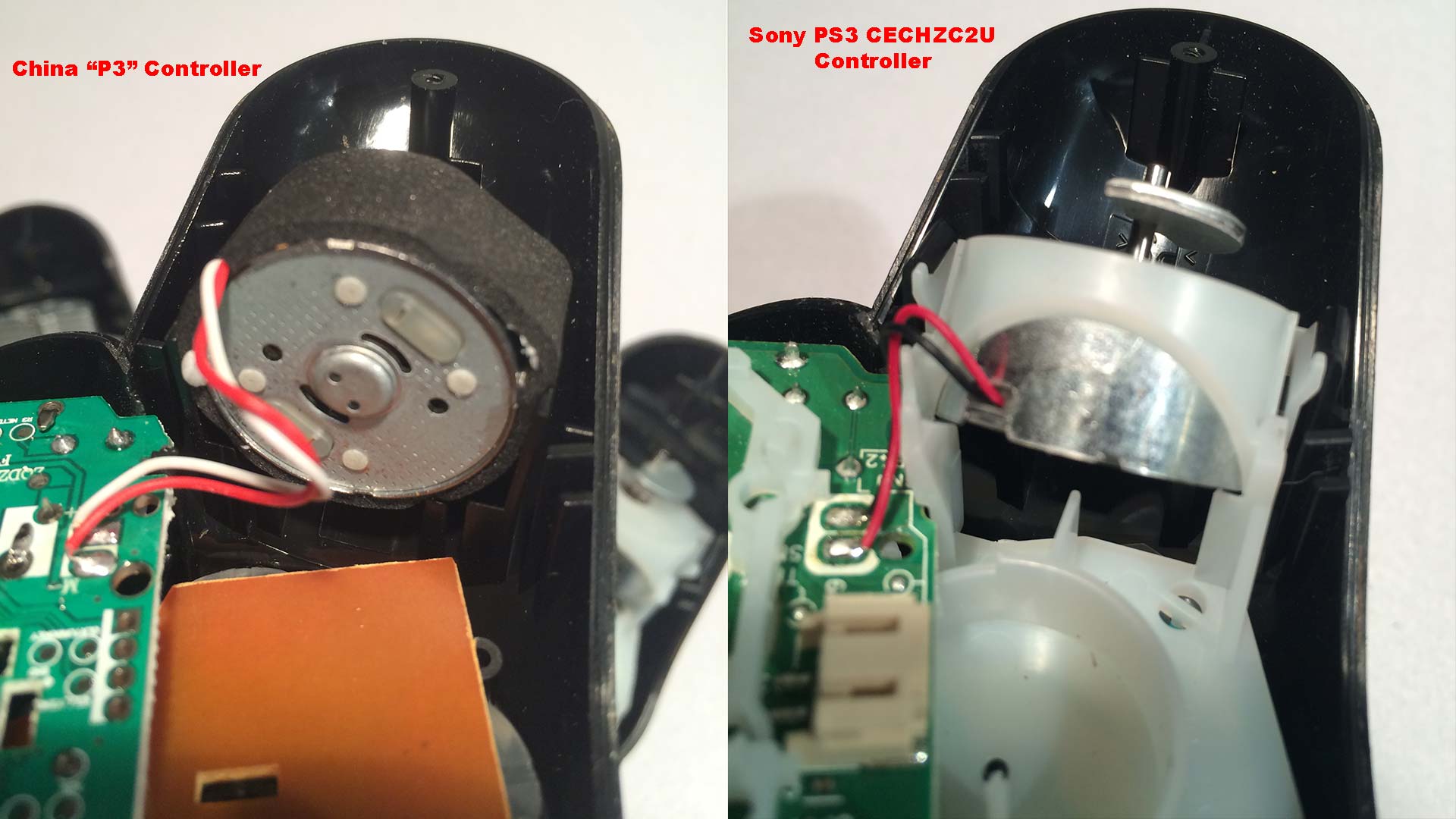 Motor mounting differences between the P3 and PS3 controller.

Even when you look at how the motor mounts are set up in both controllers, you have the Chinese ones which simply sit the motor into the outer shell with some foam around it, the PS3 actually mounts it to it’s skeleton framed plastic. Since you’re mounting the motors onto hard plastic on the PS3 version you’re going to feel the rumble a lot more than the P3 version. Now I can’t scream about this too much considering the Xbox Controller mounts their shock motors into their controllers the exact same way as the P3 version. But still, the foam does muffle some of the feeling to the end-user. 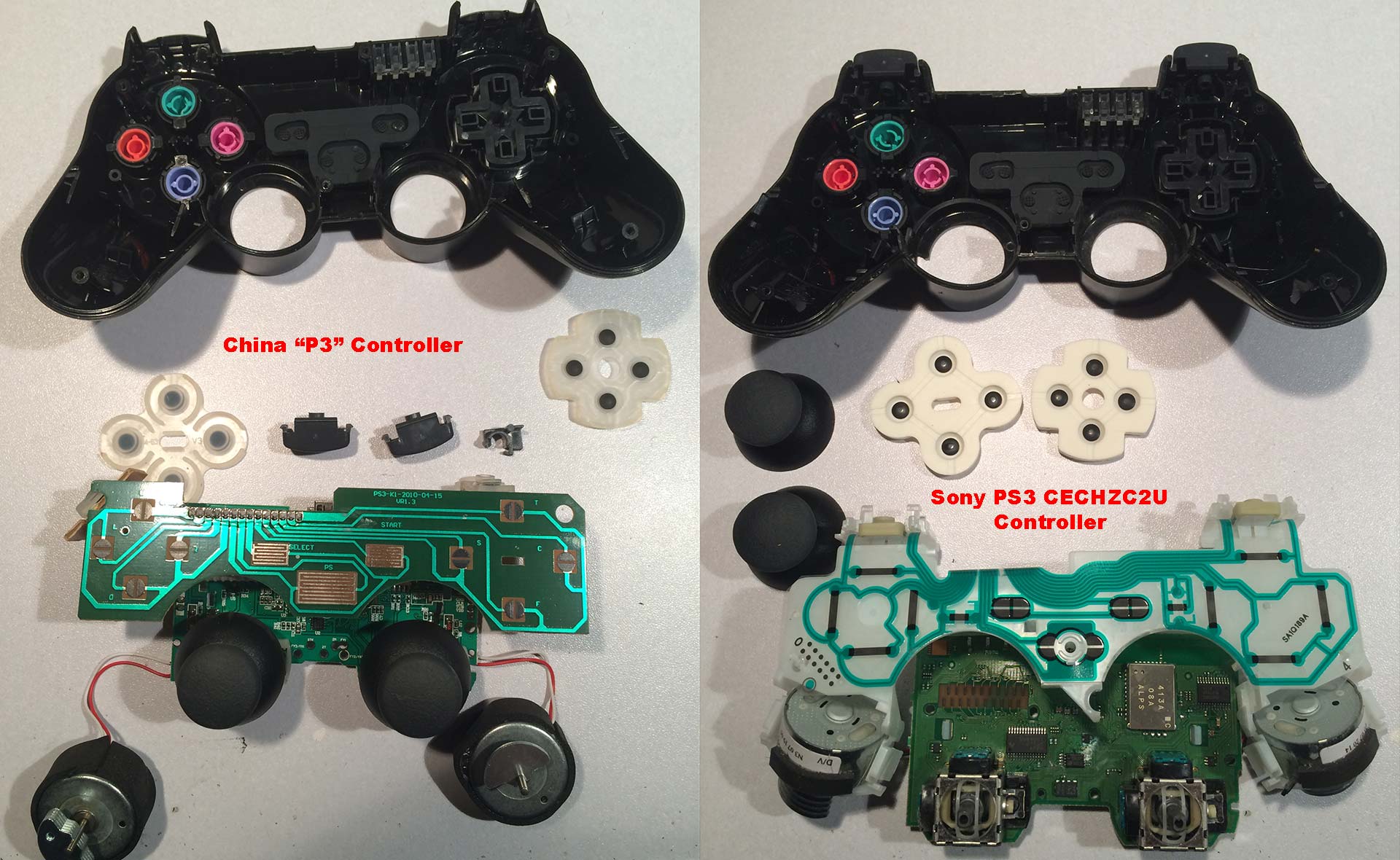 Despite all of this there is one thing the Chinese controller that it does a little better then the PS3, which is the PS3 would technically be more prone to liquid damage as they rely on tiny contacts on the board to interlink between the controller PCB of the controller and the button/keyboard PCB. The P3 method is a lot more old school with using an actual PCB instead of plastic traces. Both are totally acceptable and if the PCB was reinforced as much as the PS3 version it would probably play flawlessly. So Sony is not immune to criticism on this one. If liquid damage gets onto the contacts in the PS3 version, ghost signals would be fired from the controller making it virtually unplayable until you take it apart and clean it again. In fact, the one I took a picture of has a little bit of liquid damage around the home-button PCB. 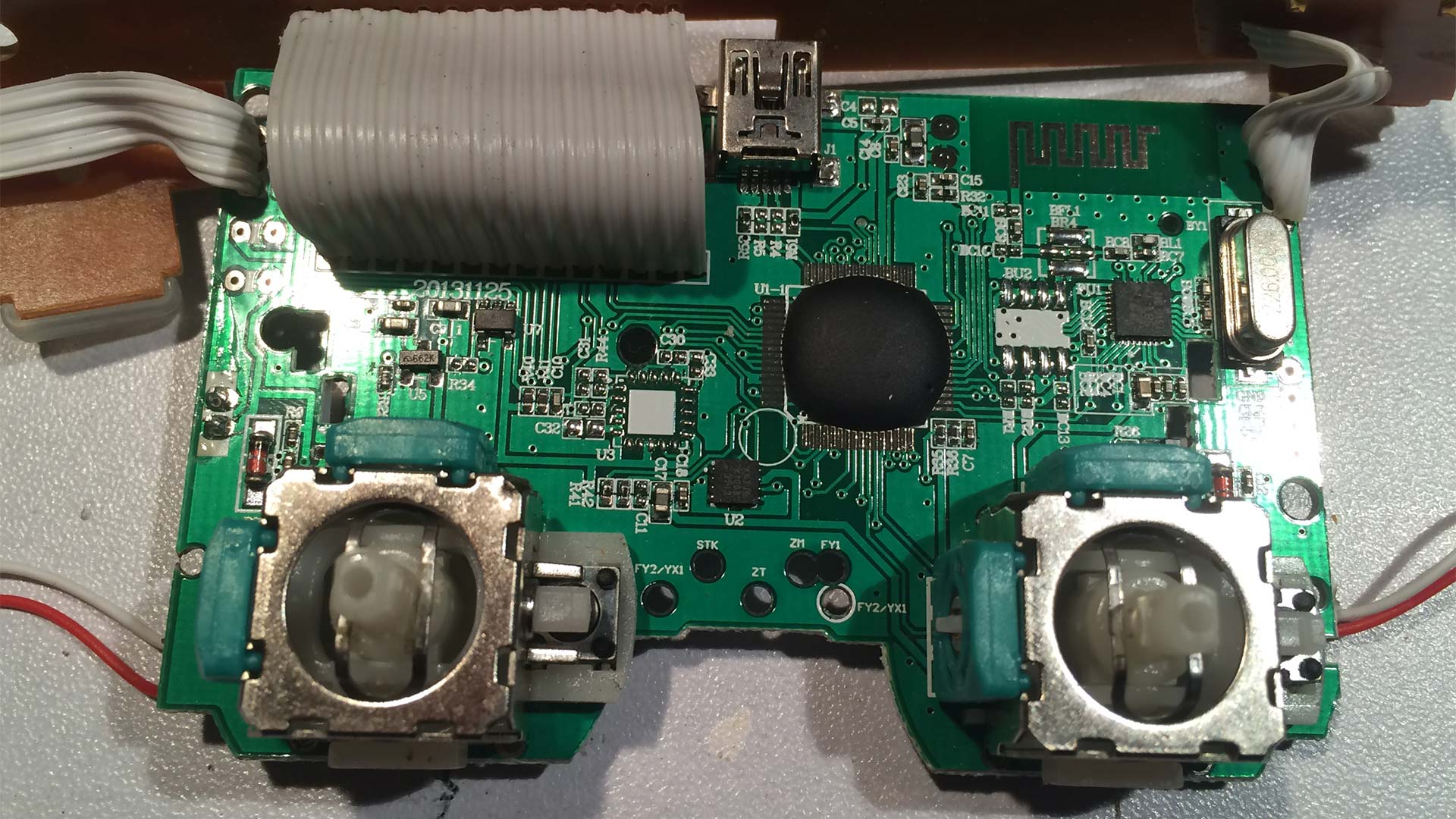 The last thing I want to talk about is how funny it is for china to insulate their IC chip to prevent someone from reading what kind of chip they used to get their controller working again. It’s funny because they purposelessly make a knock off version of their controller and then they try to protect themselves from someone else in china from copying them. Also, note the pots on these P3 controllers. They claim that they are ‘super sensitive for fast gameplay’. Which is true, they are just sensitive to the point where you can’t do any fine-tuned aiming with your controller, you’re either going %0 or you’re going %100 push with hardly any tolerance in between. Unlike the PS3 controller where you CAN vary how much your analog sticks work out for you. I think the bottom line is simple. You get what you pay for with a controller.

A word of caution to readers thinking of getting these cheap “P3” controllers!

We picked up 4 of these controllers at $10 apiece.  Out of the four that were purchased, one of them failed to pair (This can be hard-lined into the Ouya and works great, but every time it was disconnected, power down, power up and re-pair the device, Ouya complains about the PIN being invalid.) . Another controller had issues with the D-Pad where you had to press it exceptionally hard to get it to register (we found out on this controller the membrane was not placed well inside of it). The other two play perfectly fine. So there IS some quality issues with the these. Overall we’re not sure if they are even worth the $10.00(USD) and if you paid anymore then that you would probably be ripped off. They worked just fine on the Ouya as there wasn’t many games that required extreme precision of the analog sticks. In some cases having that 0-100 percent reaction helped in a few of the games. However, this is not going to be my daily joystick. I use my Xbox receiver one hundred times more then I use this controller. I would probably suggest that people stay away from these after-market controllers unless of course you were curious like I was. They are simply not worth bringing you game down over. That is my test results. hope it helps!