Sometimes, to find the inspiration you must taste the fruity Jamz of others! Wait…..

In the old world, they used to call these “Artist Jamz.” where a person would draw something and others would do their thing. Although we haven’t been known to play overly nice with others if someone presents an empty white-board we did feel it was our absolute responsibility to fill even apart of it. This article celebrates the on-the-spot inspiration while explaining what was happening at the time. 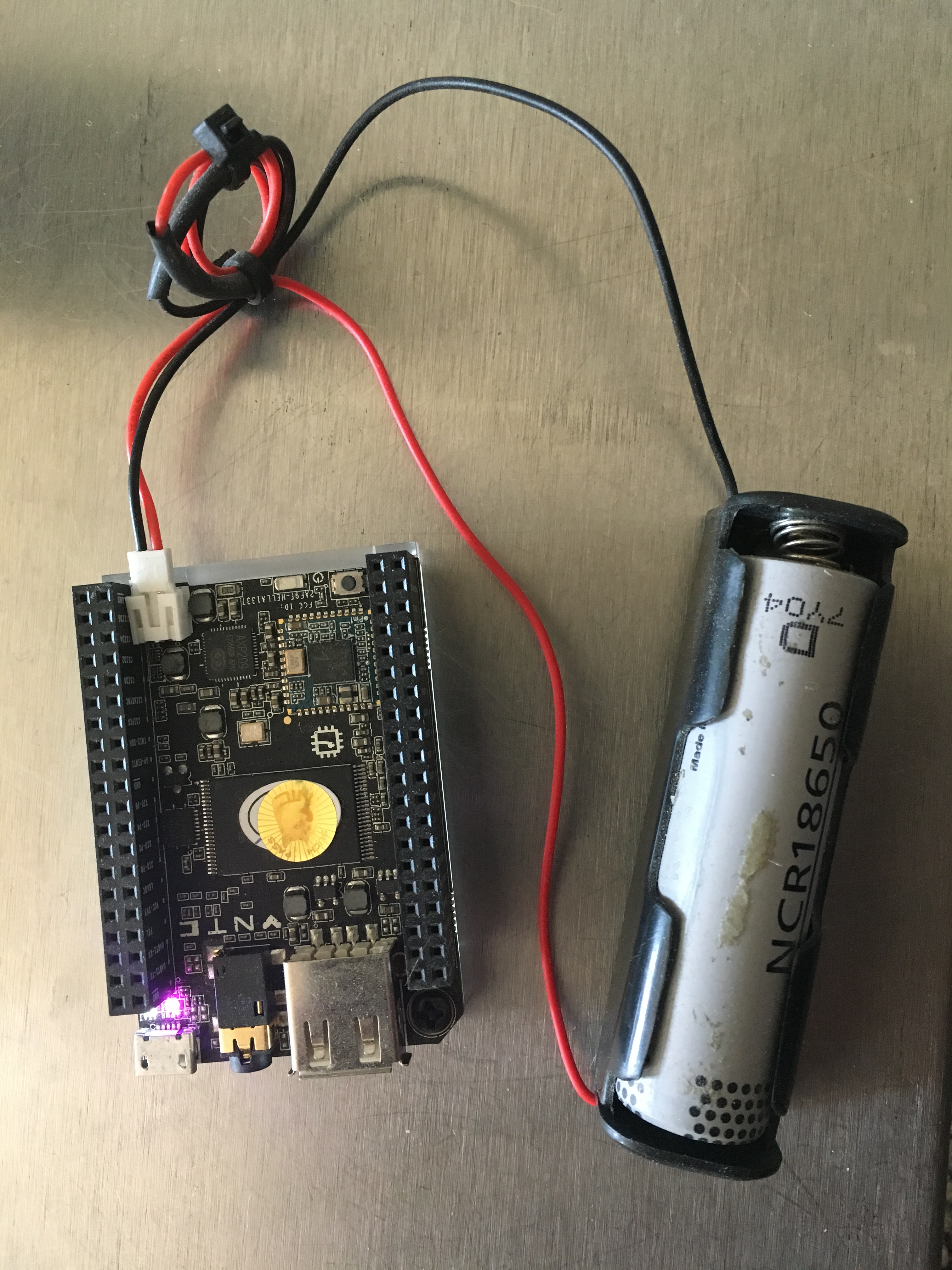 This project started as an experiment. To send a low-powered device off into the vastness of the internet and collect information. In this case, it was a NextThing CHIP that and VNC, a KDEDesktop and Firefox and behind it a simple script designed to login to a service known as “GroupBoard” where Infochammel had their Chammelstrator going. 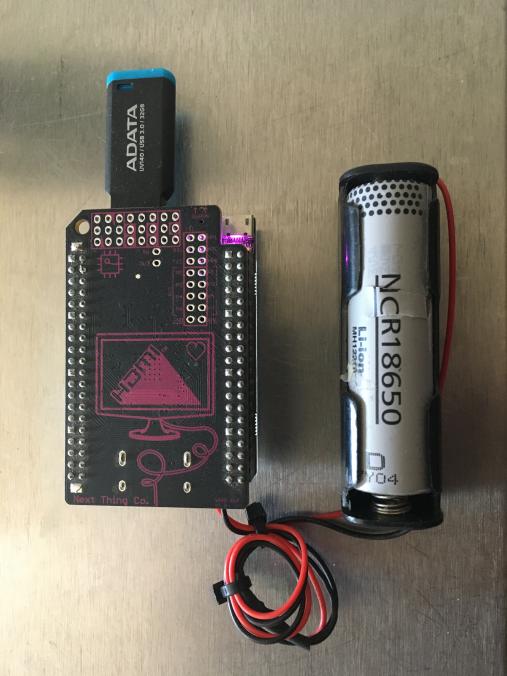 The mission of the “ChammelstrationMiser 4720K” is simple yet treacherous.  Log in to an artboard for about 5 minutes. take a snapshot. and logoff so it does not occupy a seat. Finally, wait 55 minutes to log back in and repeat the process. Effectively taking 24 pictures per day of the artboards as various people from Twitch and other vast parts of the Infochammel multi-verse began to draw upon it. 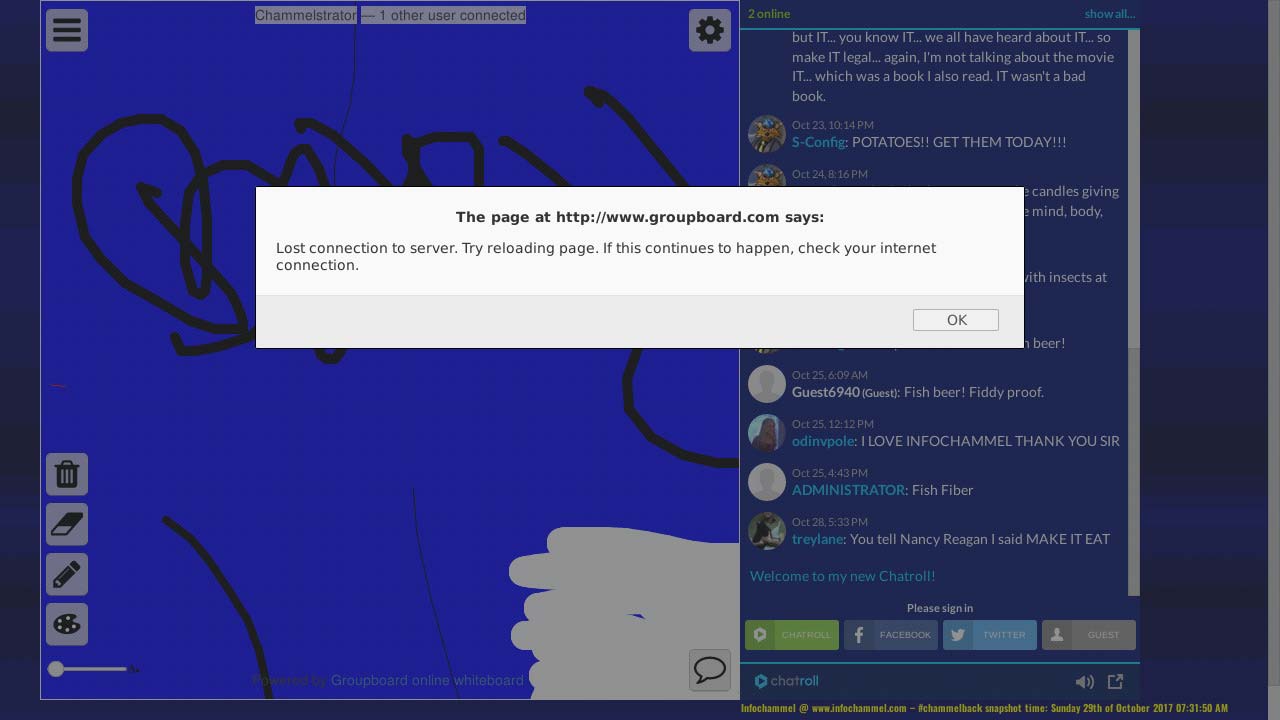 Mission control had to step in a few times a month to give a course correction. In a few cases, the “ChammelstrationMiser 4720K” went temporarily offline resulting in us having to reboot and fine-tune the probe during its flight which lasted for almost 8 months in the depths of the internet. With a reasonably un-safe battery backup in tow; “ChammelstrationMiser 4720K” managed to capture 1345 images. Like any good space program, we feel we must show you some of the pictures that the probe produced rather than keep them all locked away in some underground vault a 3 miles below encased in an emerald casket.

The pictures we are about to show are also relevant to this site as we to some extent had a hand in many of the pictures. Sometimes we covered the page while others we simply added onto what the community already made. So without any further delay here is just a sample as to what the“ChammelstrationMiser 4720K” telemetry system captured out on the vastness of the internet.

To explain what the hell is going on. Infochammel decided to do a live television service on twitch called the “Teleborg” and every few minutes it would show what the community is drawing on their whiteboard known as the “Chammelstrator” It was a way for the community to contribute to live robotic television and being known out there in the vastness of the internet. Often the Chammelstrator used the blues in the backgrounds as chroma-keys over other live web-cam events furthering the immersion that was happening right before everyone.

Furthermore, you may see references to Night-Mind because the YouTuber reviews things that are spooky or strange that is on the web and Infochammel. Couple this was weed legalization and insane food and you’ve completed the strange yet beautiful community that was online.

Groupboard as an art application was super-primitive. In many respects, it was just a few steps above MS-Paint. But that’s sort of the challenge. Try to make something out of a program that is super-restrictive. We feel we did ‘okay’ during all of this.

We still have “ChammelstrationMiser 4720K” in our storage room and perhaps we should discuss the code and the automation of it in case others wish to try it. The real problem with the probe is simply put it was way too underpowered. With Firefox eating up a lot of its resources combined with a flash-like interface. it was just too much for the poor 512k CHIP module. If we were to do this again we will probably use a far more powerful module to sent into the depths to collect pictures 24/7.

Although not as magical as the journey of the automated camera-man flying through the internet taking pictures through the portal of FireFox. It should be noted the streamers especially those in the creative scene will leave a public space for their watchers to draw upon their wall and see how the streamer would react to such things being drawn for them in real-time. Aggio.IO is one of those places where a lot of people because unlike GroupBoard its access is restricted per layer. Meaning, if someone draws over your stuff in an attempt to destroy. They are on their layer and thus it can be easily removed by the administration. it had a chat system although we hardly saw anyone use it.

The above pictures originated from a Twitch streamer by the name of FunkyJoe. However, it’s a demonstration of keeping your audience entertained and let the creation passion flow outward onto the internet.

Final thoughts on the “Art Jamz!”

It doesn’t matter HOW art happens so long as it does. internet graffiti and doodles can eventually evolve into something more. and over some time those little blurps of sketches and blobs of color begin to almost tell a story of their own. I may assemble all of the frames of “ChammelstrationMiser 4720K” into a video stream to demonstrate that. But first I will need to get some music and some VFX done to give what the community put out the quality that it deserved.;)

It’s impossible to give credit to the others that were involved in these images. Because of the nature of these types of online drawing programs, it presents almost a state of anonymity. But for what it’s worth thanks to all those who were apart of. Thank you Infochammel for showing me the way.

This page is here to serve as a document that art happened. It existed. And that there’s probably so much more out there going on that couldn’t possibly be recorded onto a tiny ARM processor looking out of a portal of firefox.

But until next time. Don’t die.