One of these controllers is now on my bench.

It was bound to happen!

As always everything on s-config.com is on an AS-IS basis and is designed for educational purposes. Read our FAQ for more details.. We are not responsible for any damages that occur if you carry out such a repair on your hardware.

Would you like to know more? Continue to read onward!

The problem with the controller. 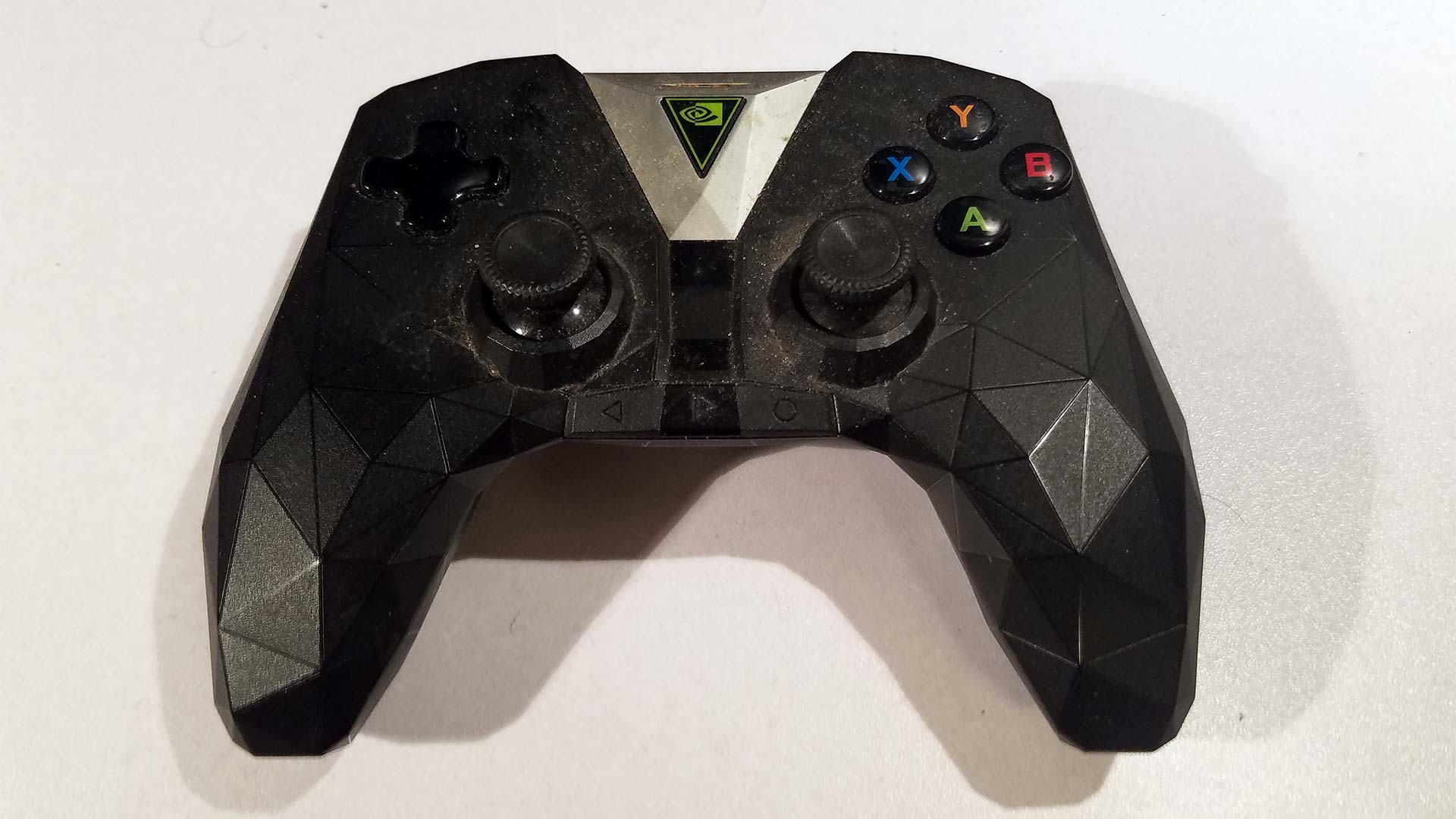 Sticky buttons. This generally happens when someone spills liquid onto the controller. Of course, if you ask your friends or the customer themselves if they spilled anything on the controller they will deny it! But just on the surface of the controller, there’s a spray of brown crystallized liquid that was all over the upper plastics of the Nvidia Sheild controller. Now, there are some YouTube content creators which would tell their audience this:

These guys are assholes! Because it may break up some of the garbage between the plastics of your controller it leaves behind this oily residue which attracts dirt and debris. Ultimately you’re going to have to take apart your controller to truly take care of the problem!

Tools of the trade. 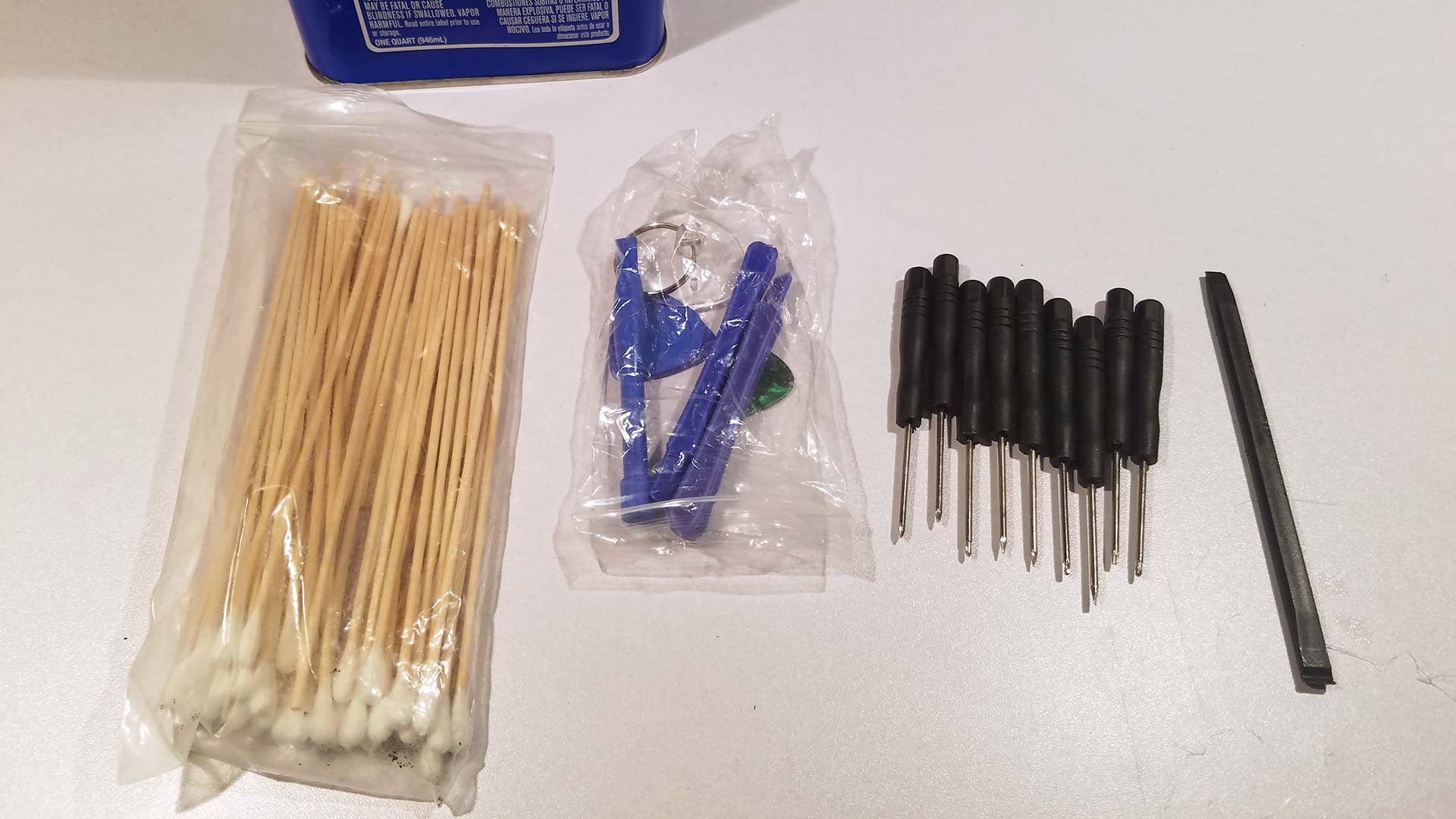 Nvidia has never been a company known to make their products user repairable. if they just stuck with Phillips head screws on their products they could’ve made the whole procedure a hell of a lot easier. But at least they weren’t total dicks by requiring you to purchase a T8-security bit like the Xbox 360 controllers.

On top of that, the shell of the case is clipped as you’ll see in a moment. So the ultimate repair kit is actually the same kind of kit that you purchase for an I-phone repair. 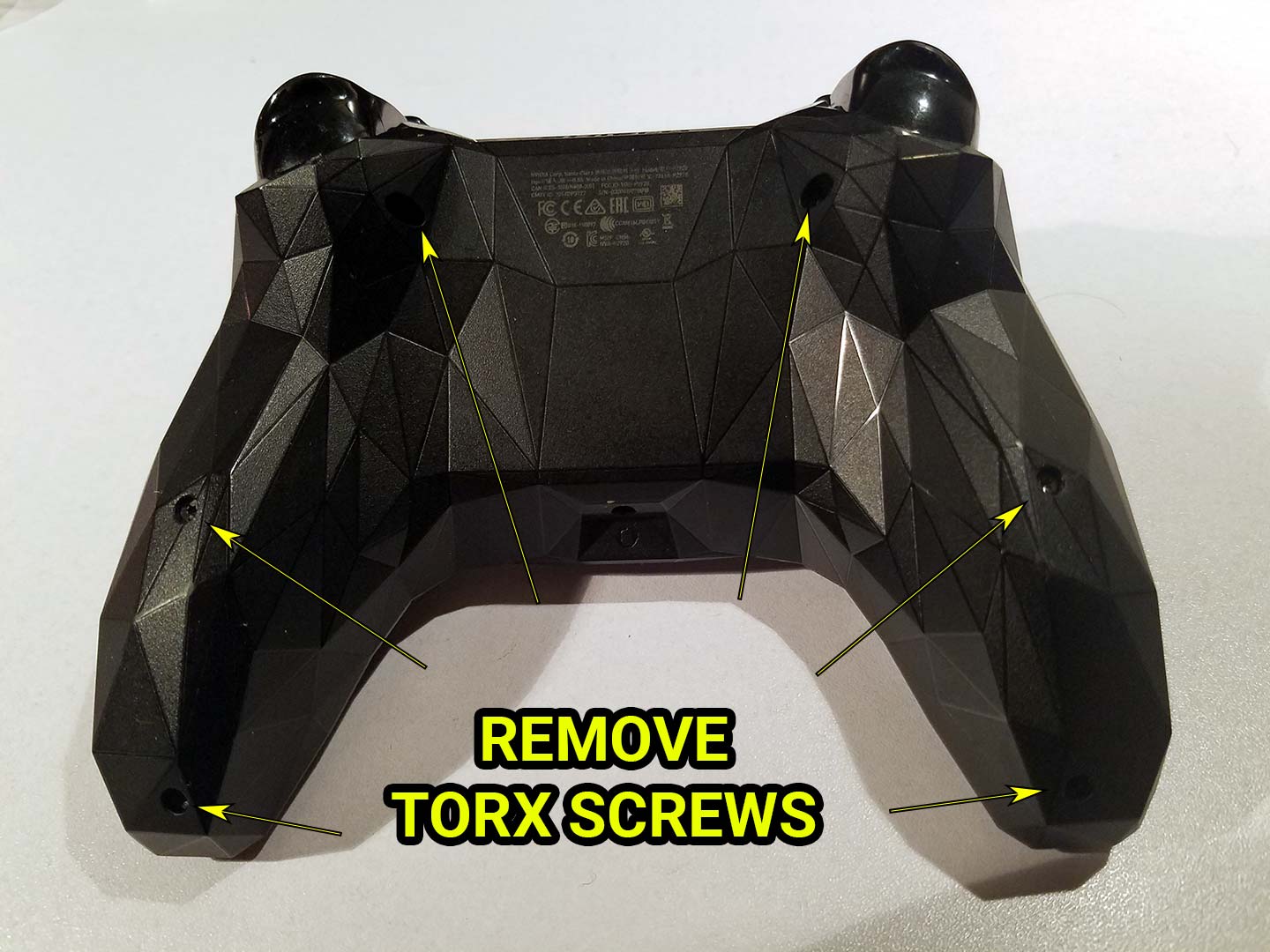 Let’s bust out that I-Phone repair kit with the (I believe) T6 screw and remove all of the screws in the back. 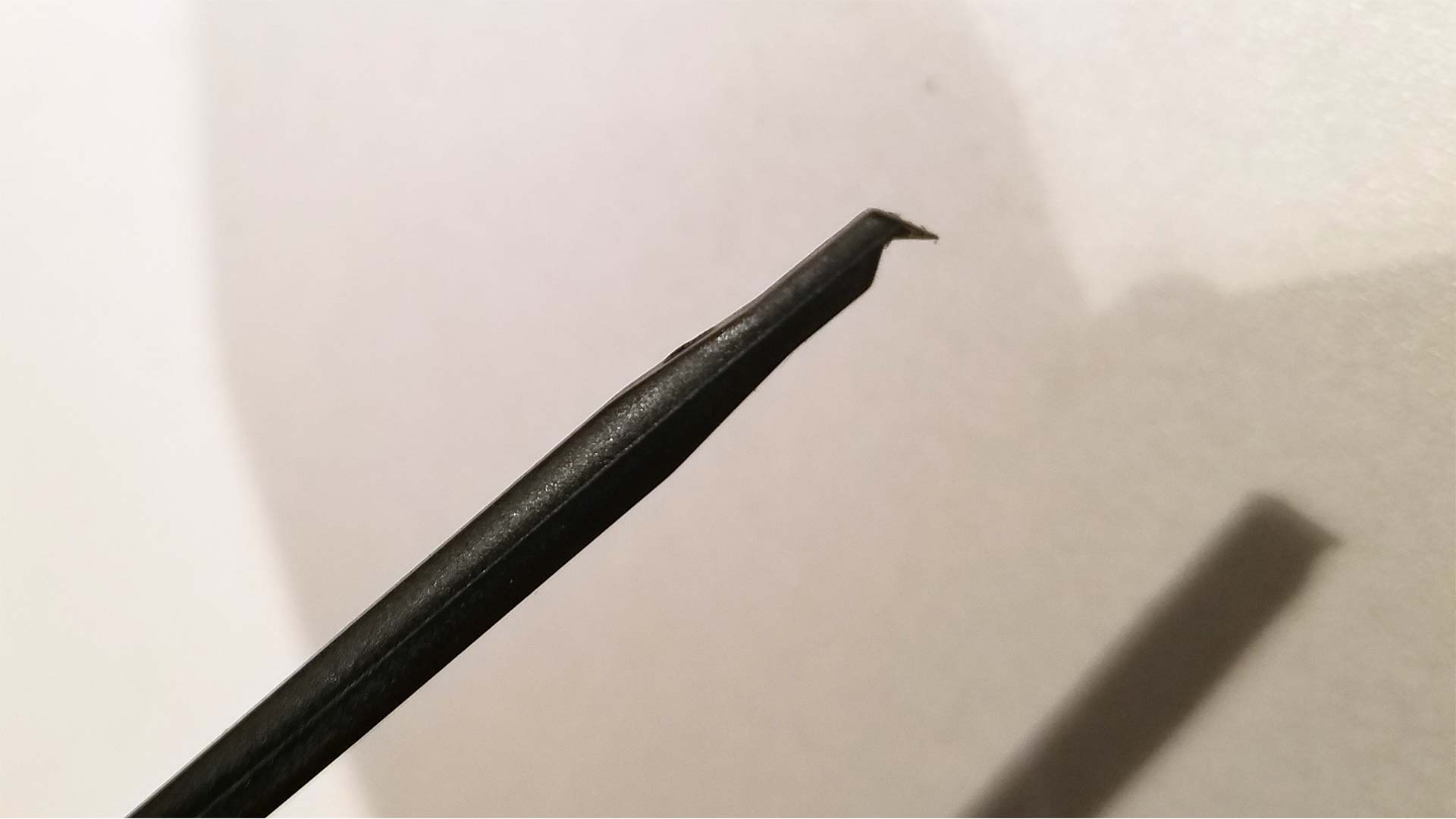 You’ve probably noticed that after you remove those 6 screws that you cannot pry open your trusty Nvidia Shield TV controller. That is because Nvidia felt the need and/or desire to plastic clip the inner shell so that even if all of the screws fall out that the shell itself will stay together. You’re going to need to work around your controller with this plastic pic that most I-Phone repair kits come with. 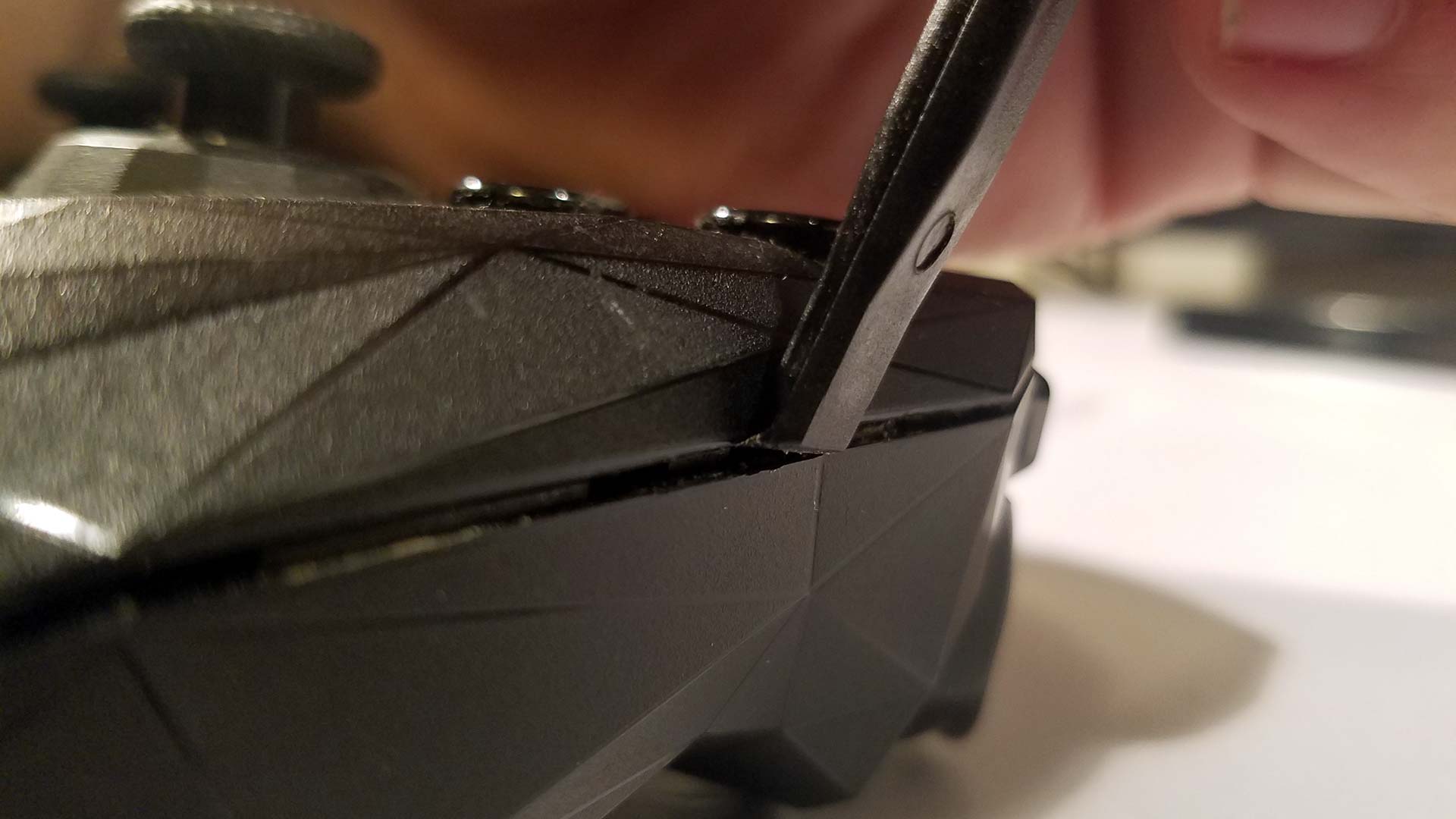 Learning from our own mistakes, you should start from the bottom of the controller and slowly work your way up unlocking all of the plastic tabs. This part you want to be patient with. You’re not only fighting the plastic clips. 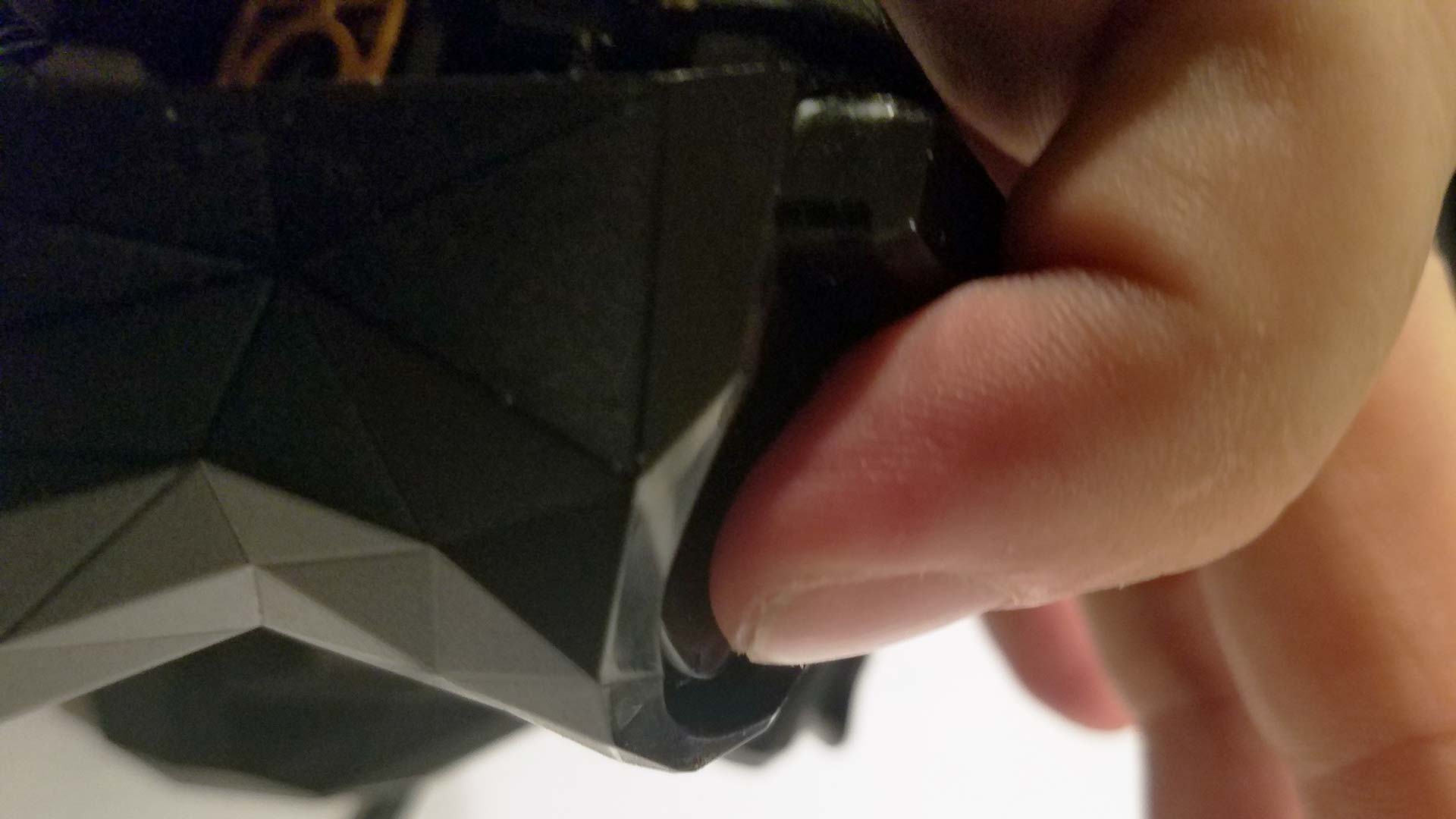 You are also righting the front analog trigger similar to that of the Xbox-360 controllers. Try to be a little careful of the front of the controllers as the upper rail buttons also tend to stick to the bottom as you are separating. Between assembly and disassembly, this will be no doubt the hardest step of the process. 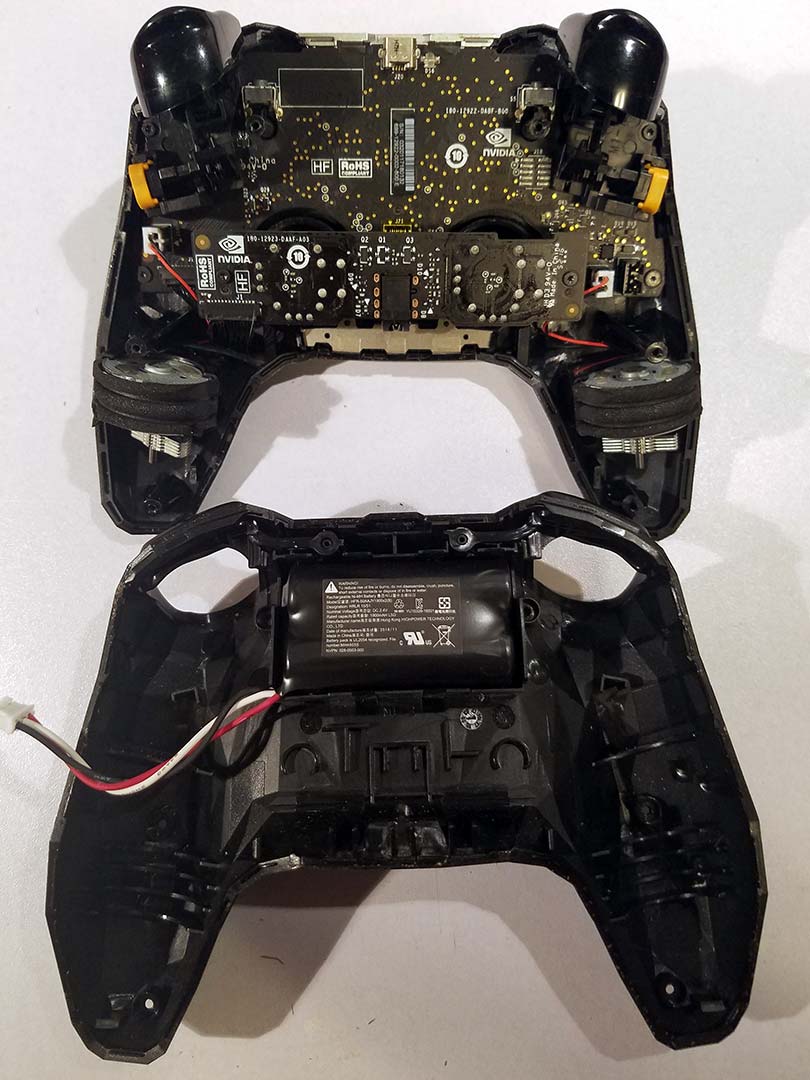 Alright! We got the controller apart! It’s interesting that Nvidia has chosen a 2.4v NiMH battery pack part number HFR-50AAJY1900x2 instead of saying what modern controllers have which is lithium Ion packs. Good news on this subject is your Nvidia shield and the controller will be completely safe to travel with you through the airport in a bag check-in. You will just need to carry-on your remote control which regardless of generation will always be lithium-ion. The bad news is NiMH’s aren’t really known for having a good shelf life. So a replacement may be necessary after a few years.

Be aware didn’t walk away from this process flawless here! 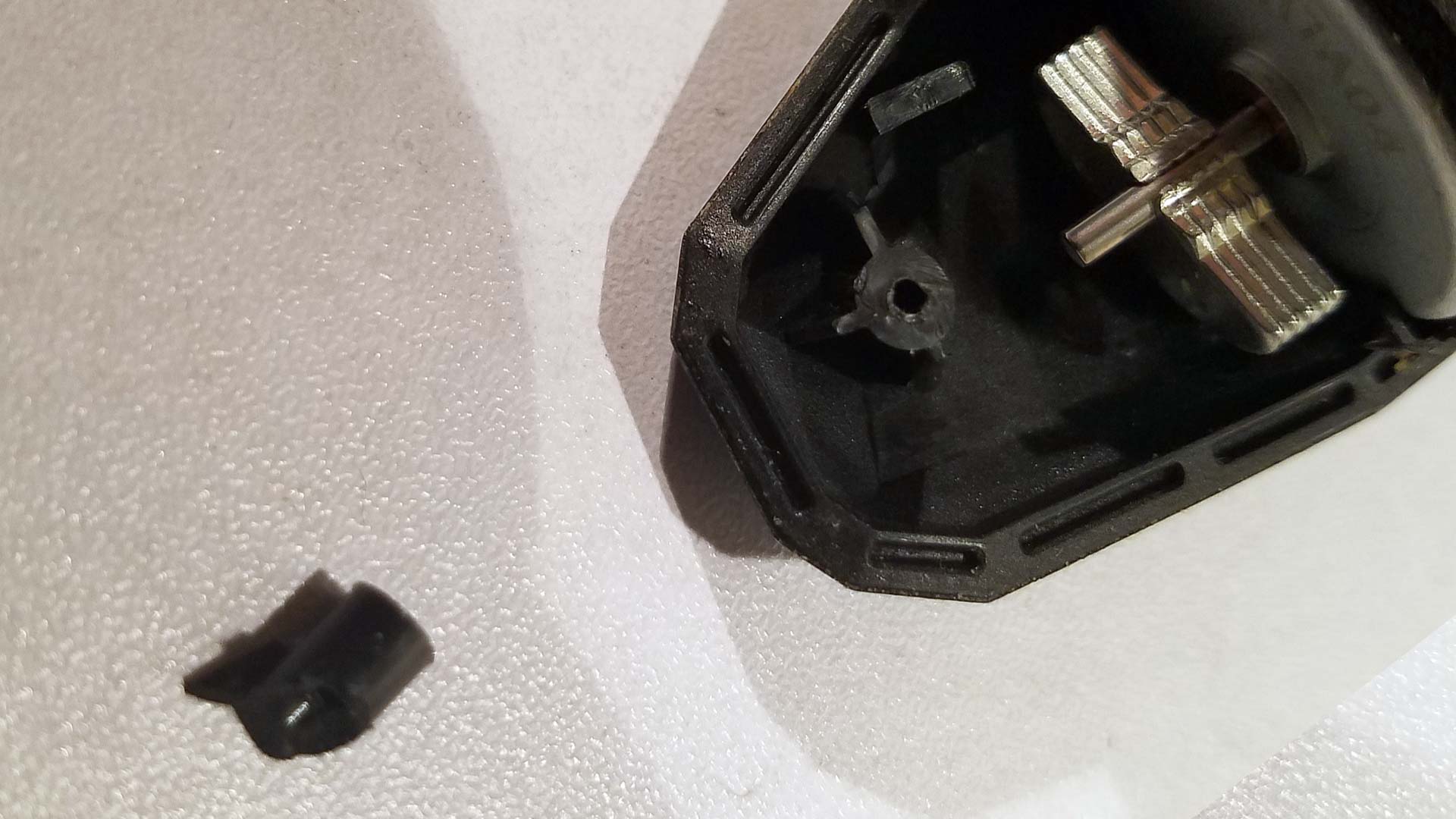 Is it a blessing or a curse that we had to fight those plastic clips? We’re not entirely sure because as we popped the final clip in the front we had this piece of plastic fall out which was one of the screw holes. Now, it could’ve been the fact that we started in the wrong area on the controller and produced unwanted stress. It could’ve been cracked from us torquing on the screw. Perhaps we were impatient with fighting with the plastic casing and pushed it too hard! It could’ve just been shitty plastic re-enforcement on Nvidia’s part. Either way, you slice this there’s no real good way of repairing plastics like this except for perhaps JB-weld epoxy.

Nothing can be done at this stage so we’re just going to move forward with the repair. 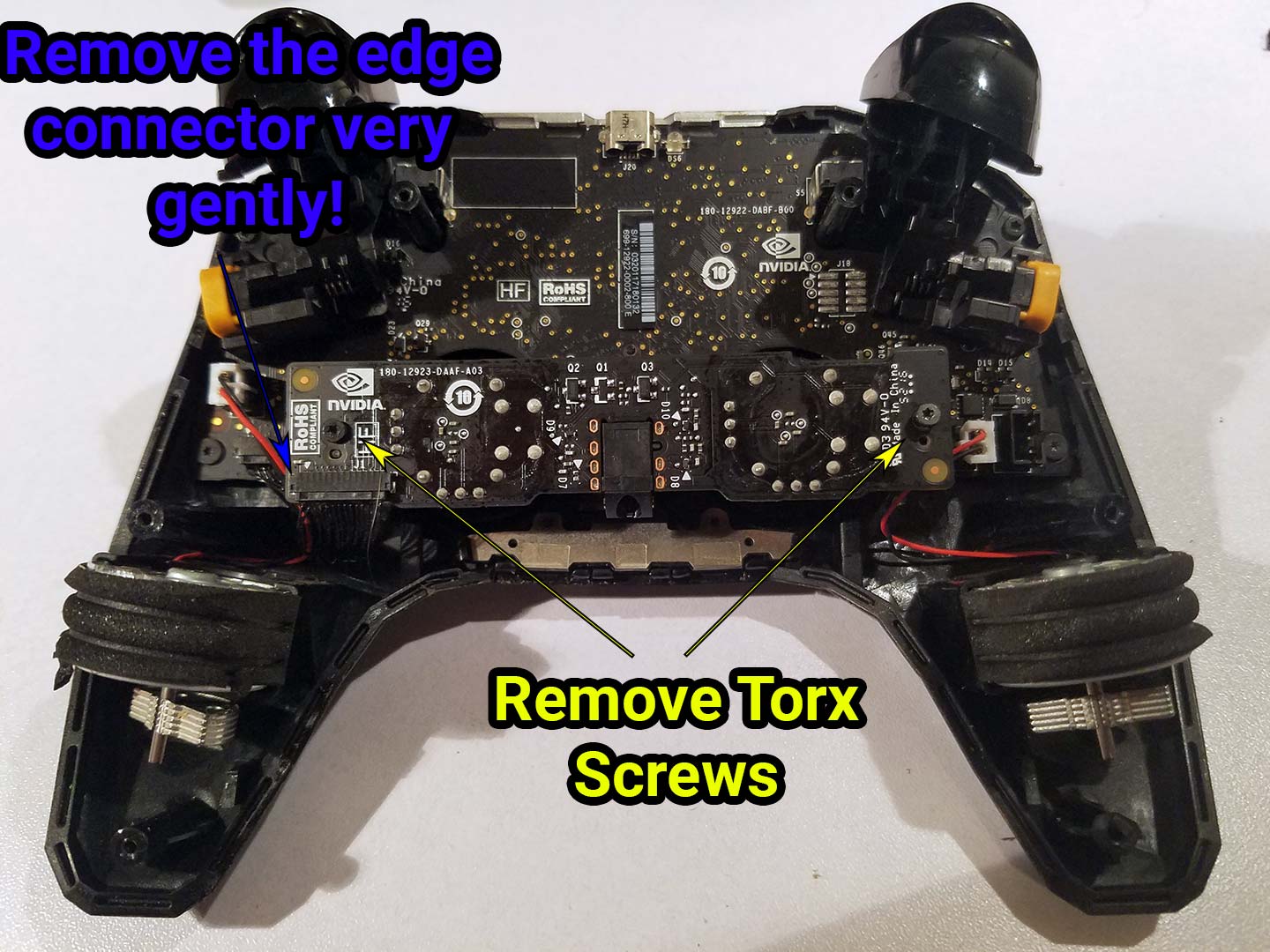 We have to remote two more T6 screws and then finally the edge connector on the side. We particularly hate these styles of connectors as the cables can tear so easily. using your plastic pry-pick or an incredibly small flat-head work the sides of the plastic out. DO NOT tug on the cabling! 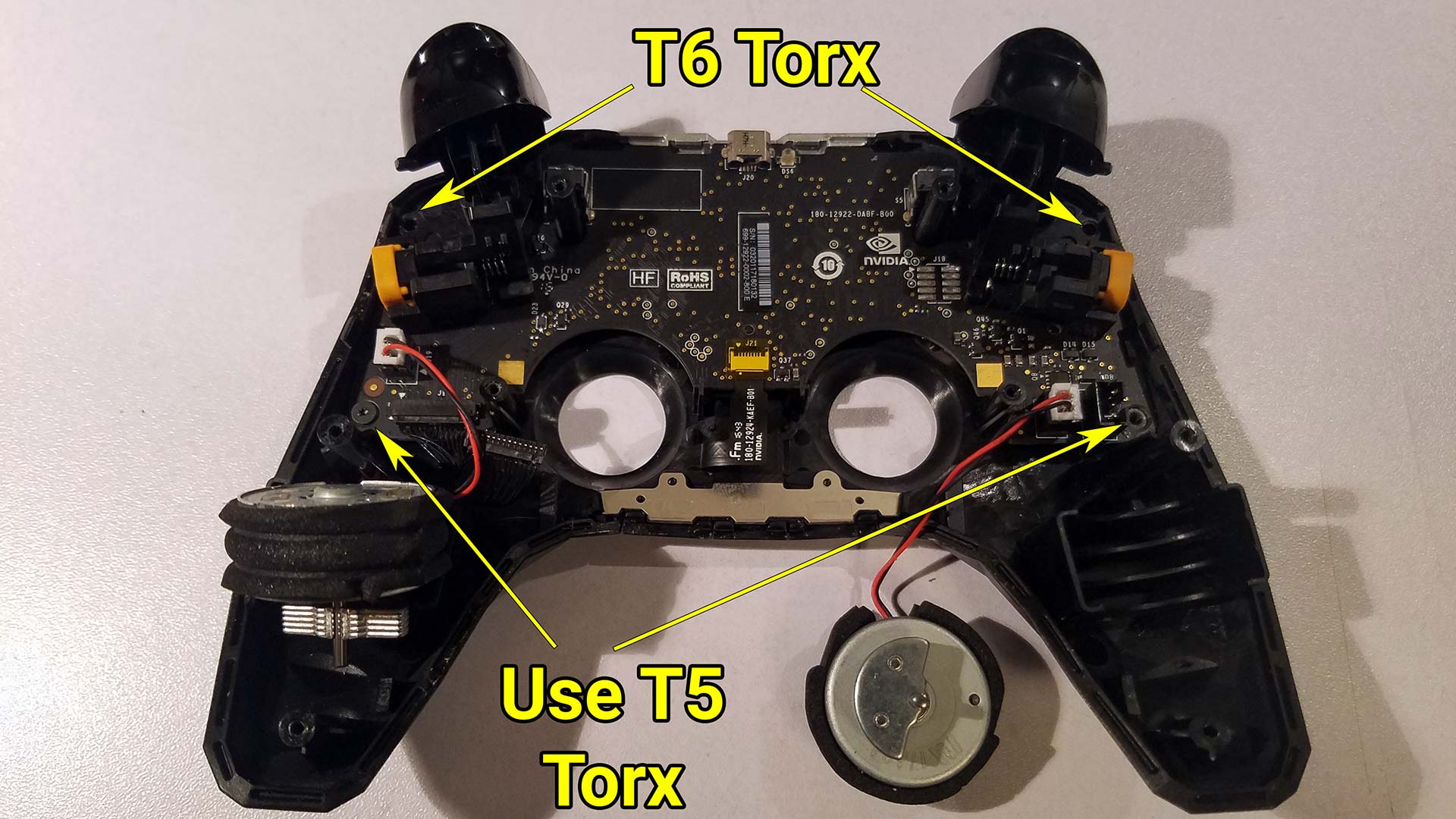 In a super-dick move, Nvidia decided they were going to use a different sized Torx to finally remove the motherboard. So remove the T6 screws on the top and finally remove the T5 screws near the bottom. It is almost ready to be removed straight out except for the edge connector right in the middle which gives us the touchpad support. 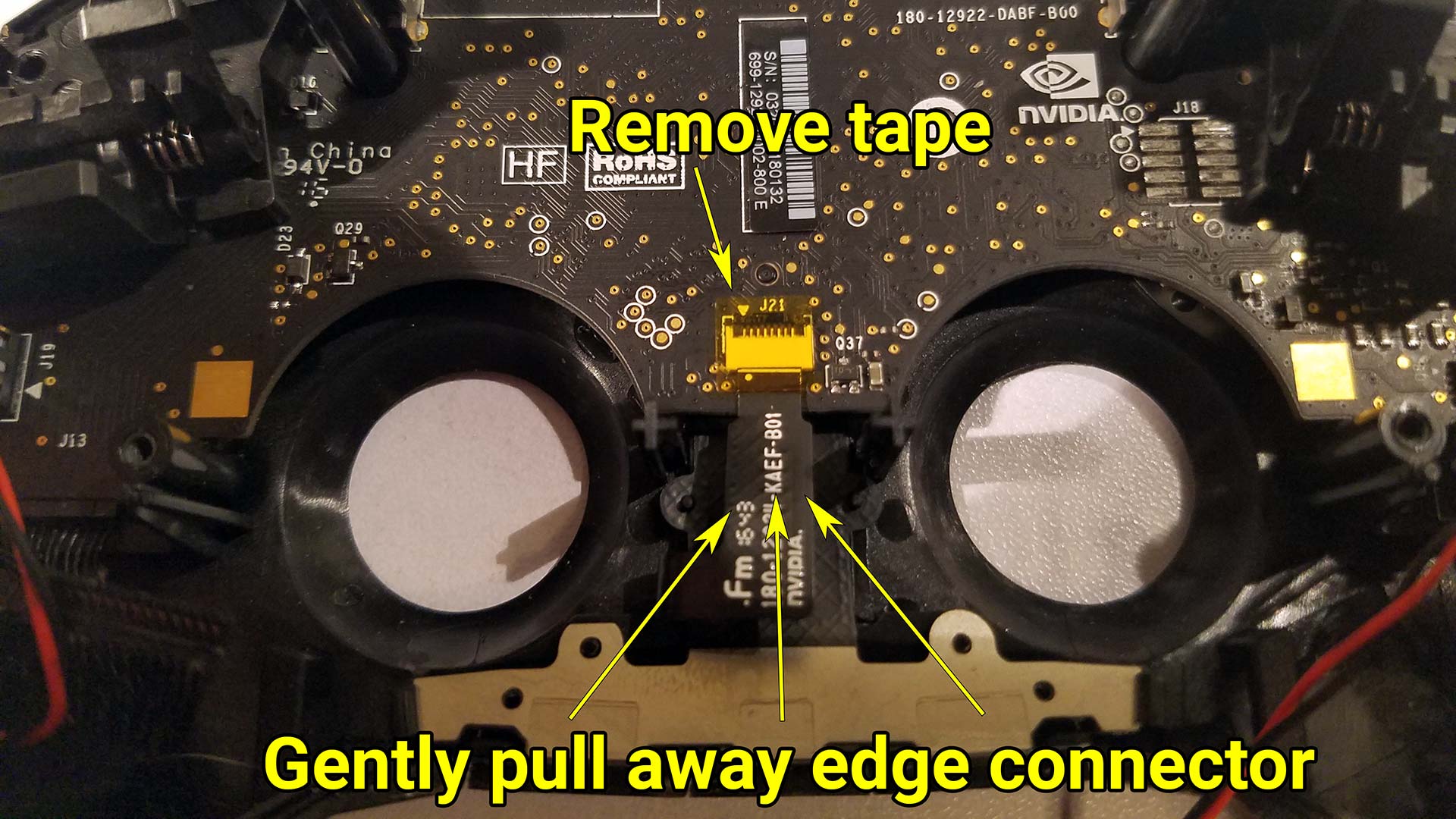 Using cel-phone level screws isn’t the only thing Nvidia incorporated into their controllers. They also were a special group of dicks by having incredibly fragile edge connectors instead of JIT connectors. Remote the yellow tape that is holding the connector and cable together. Finally, very gently tug the cable out. you can wiggle it back and forth and you should visually see the white line pull out further and further until it pops out with ease. 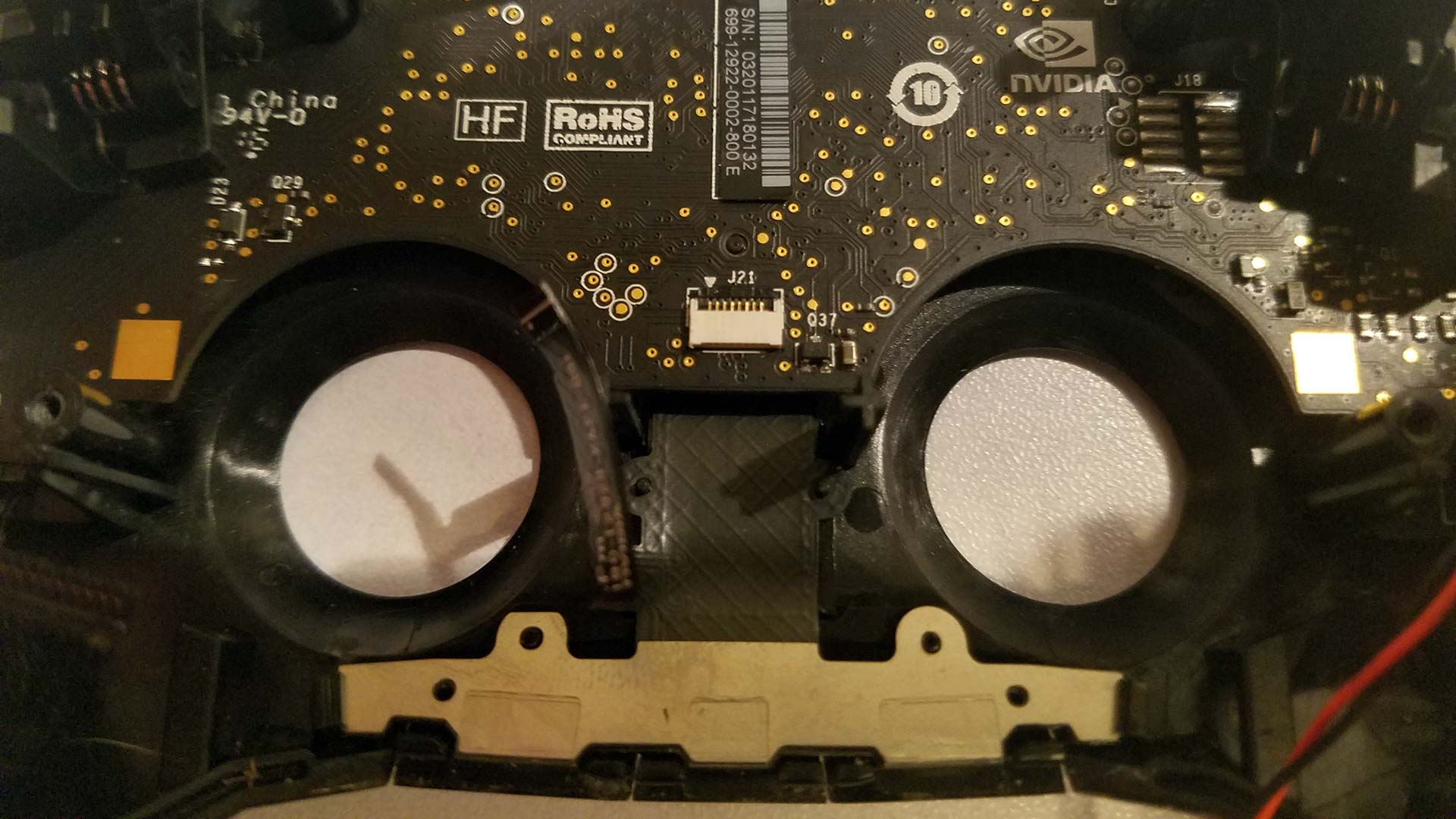 At this stage, you can tuck away the edge connector so that it does not get damaged when inserting or removing the mainboard of this controller. 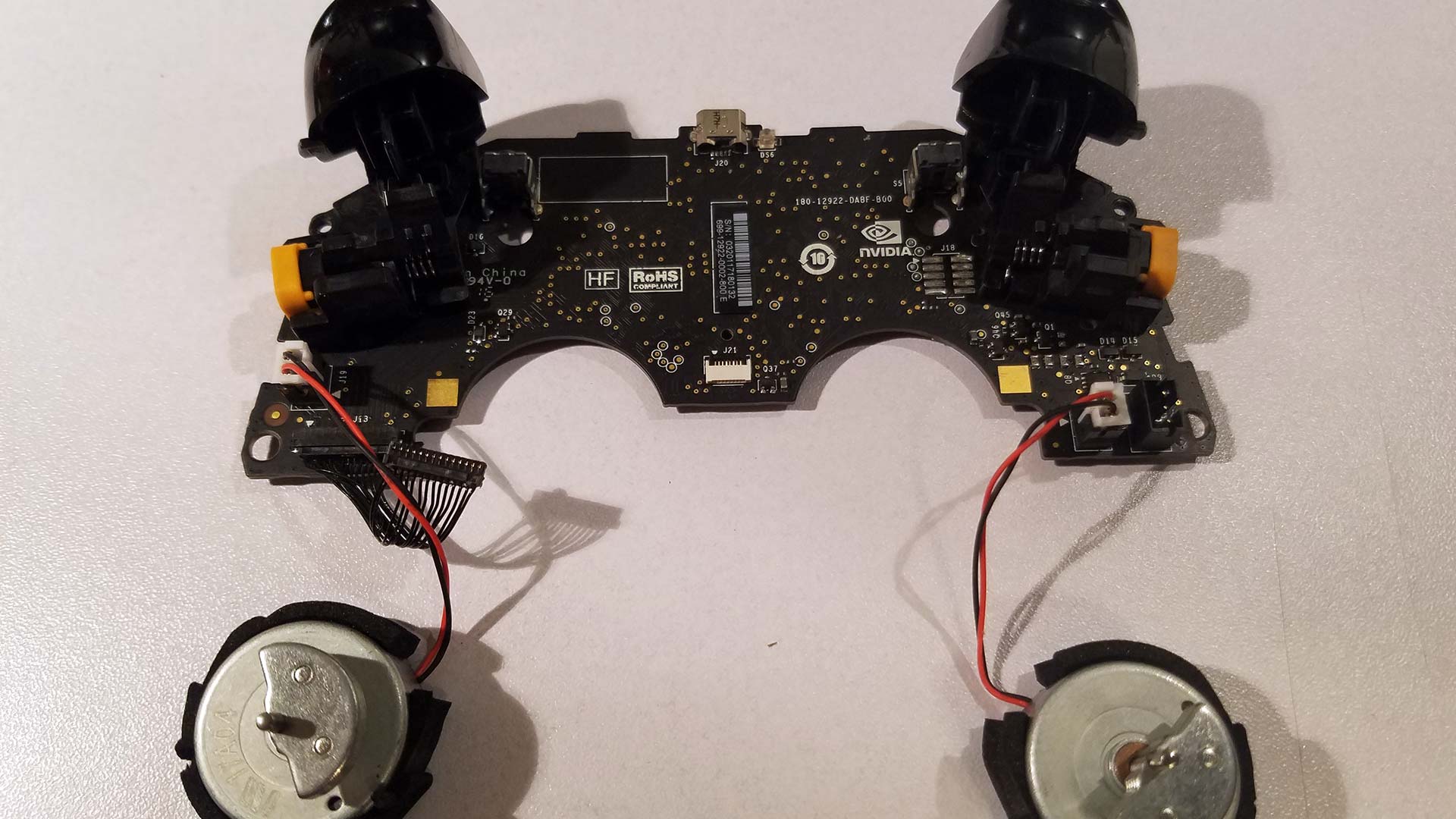 Alright, we pulled both the rumble motors and the board out at the same time. we tried to disconnect the motors but they were super connected to the board. We opted to just not deal with it and leave them plugged in. 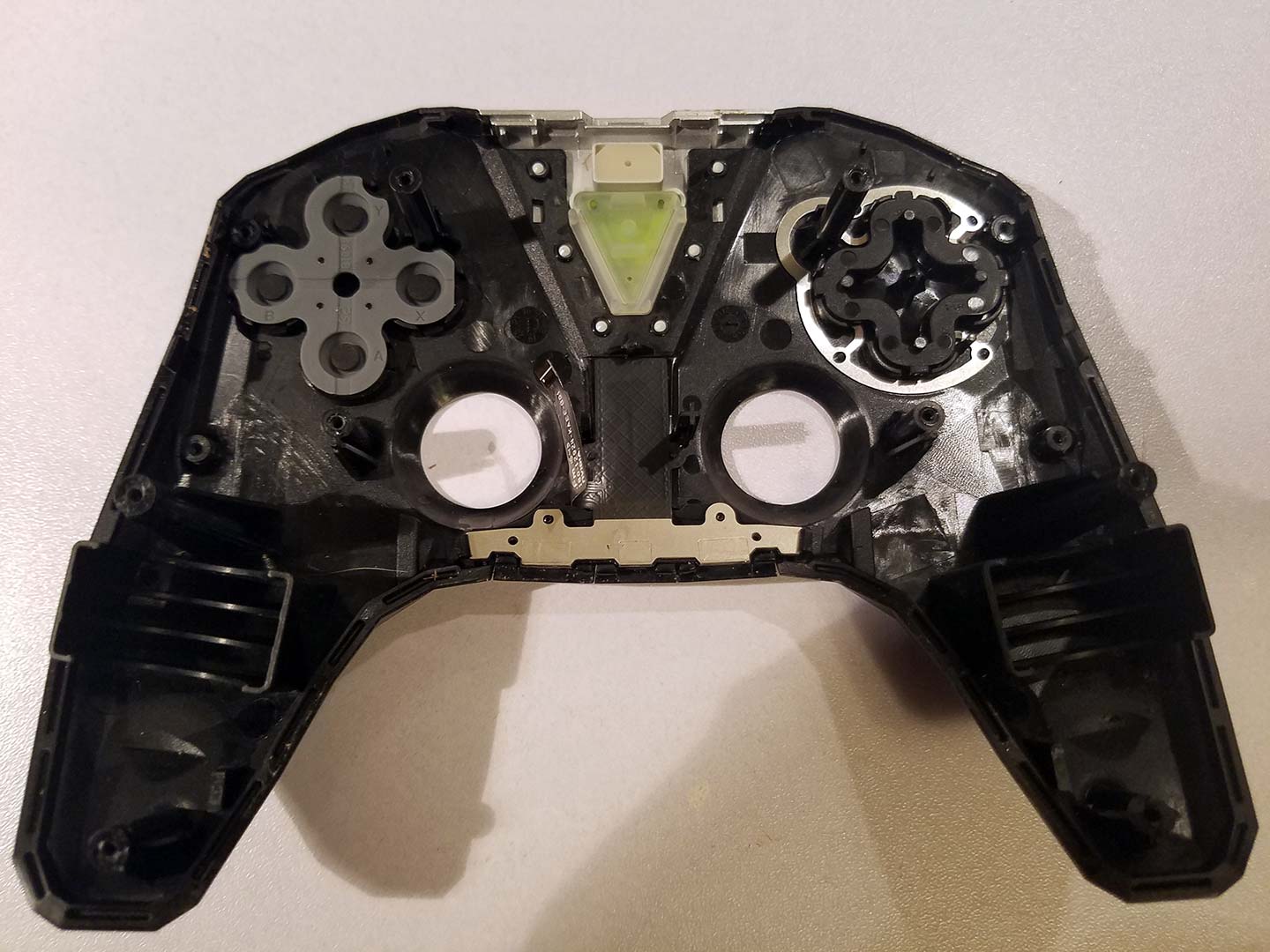 With the top of the shell finally exposed we can clean everything! not just the BAXY buttons that we had problems within our video. But the direction buttons as well as the home button for the controller. 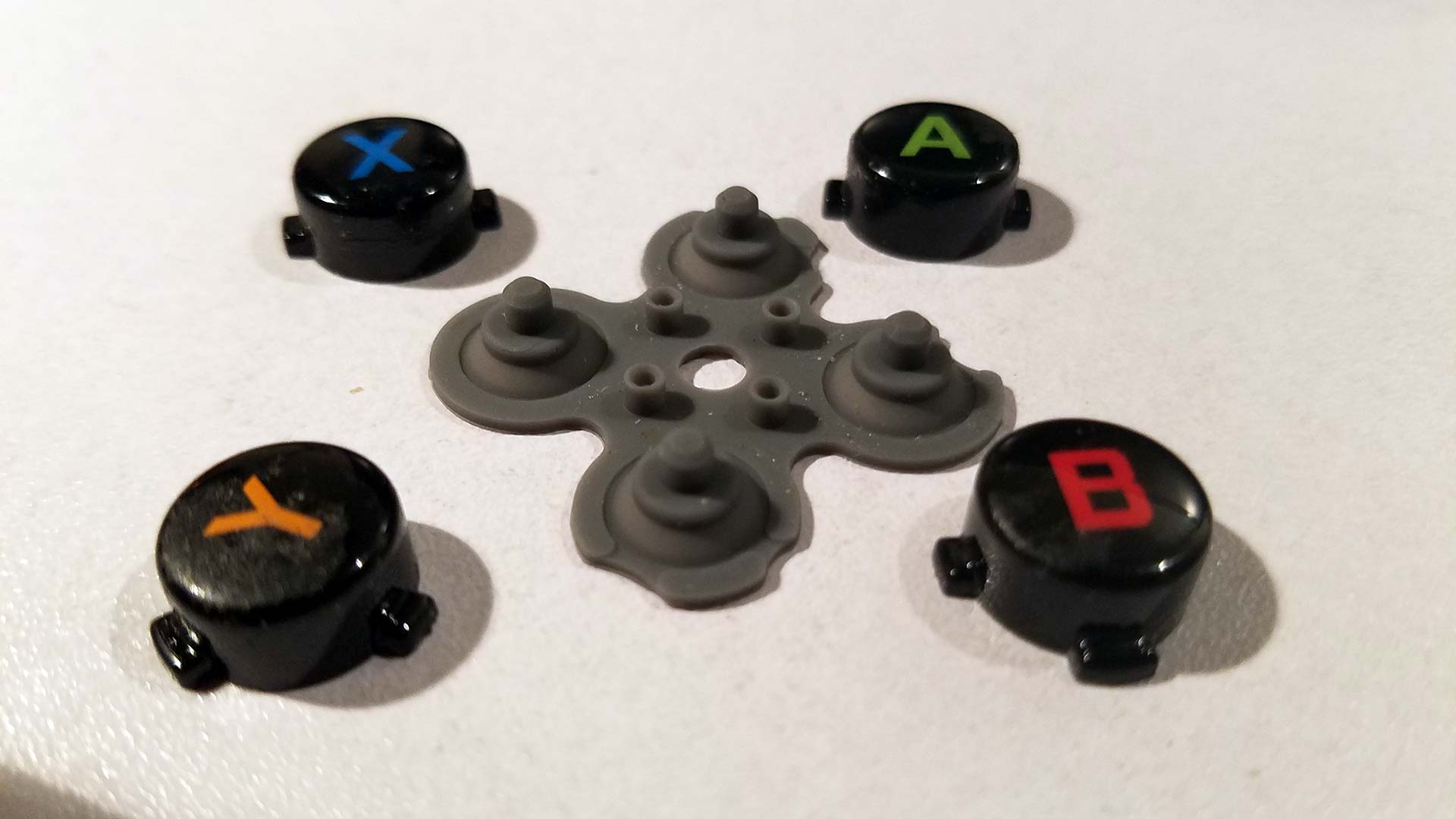 With a close up picture of the buttons, you clearly see the damage that took place here. Ironically these feel like similar buttons that would go into an Xbox 360 black controller. It’s time to clean these bad boys up with alcohol until they shine. We think that what was spilled on the controller was coffee because we actually had to scrape off the crystallized debris from some of the buttons. 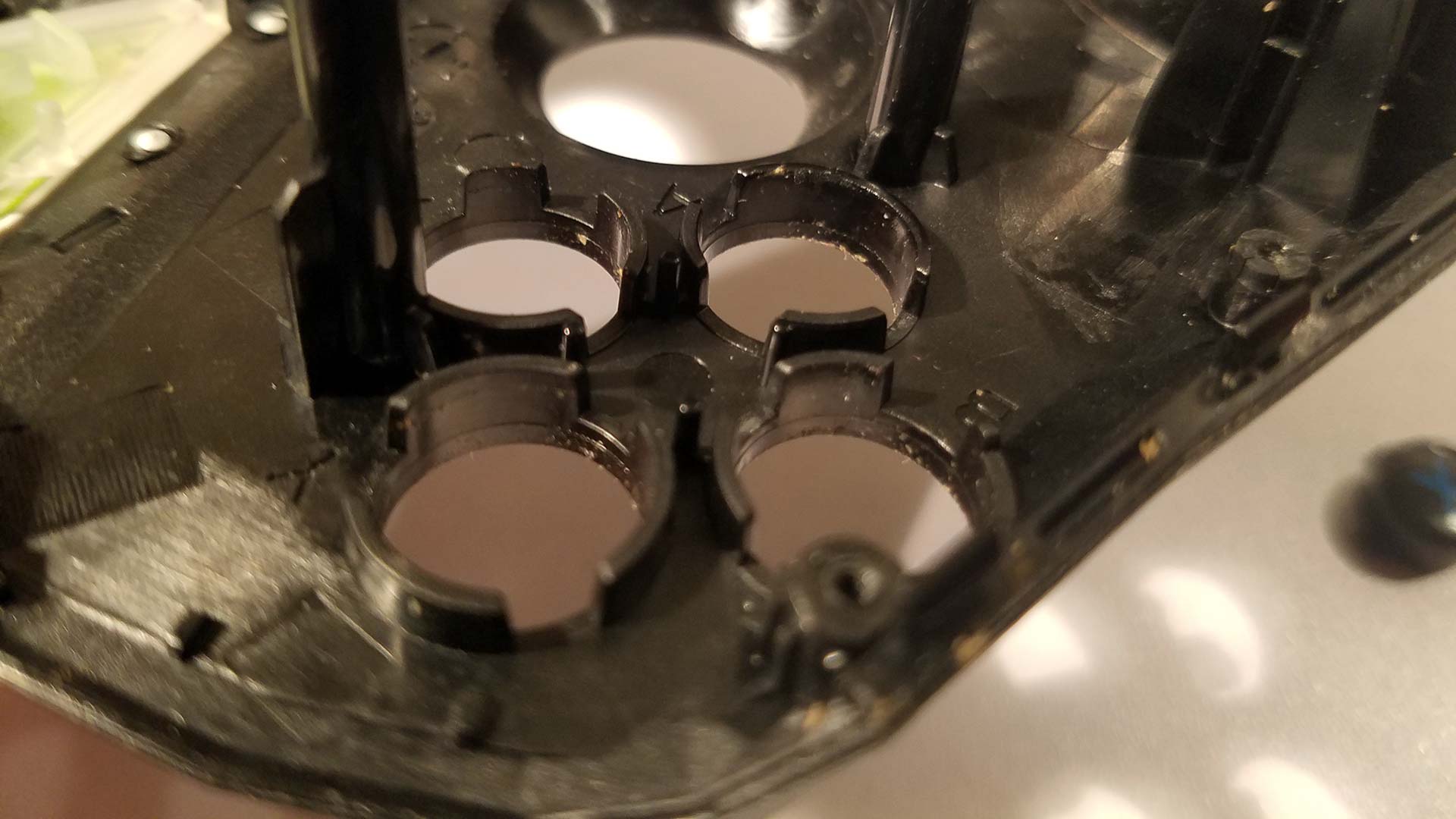 Not just inspecting the buttons we also have to inspect the plastics where the buttons would be installed. As you can see there’s liquid there too! time to clean that section up! In fact, we’re going to go through everything and scrub the front plastics with alcohol to get it as shiny as possible!

After you are all done follow the steps in reverse minding any cabling issues or clamping issues in the front of the controller and you should be back online ready to rock and roll!

When I re-assembled by the controller and paired it back up again. I found my Analog-stick drifting to the right all of a sudden! This is probably because I unplugged the battery and thus calibration of the controller was lost.

After reading some forums we found that we weren’t the only ones with this problem. What you must do is use your remote or hook a keyboard to your Nvidia shield. unpair your controller completely.

Then, re-pair the controller.

I was worried I would have to take a look at that daughterboard and repair the potentiometers that. Luckily it didn’t come to that!

Click here for another blog on how to repair analog drift.

The calibration on this controller did not hold. Within a few days time it was back to drifting towards the left and wreaking total havoc on the Nvidia console. Which means, another blog to fix that problem has been generated. click the link above to follow that if you are having problems with your analog hats drifting like we did.

Yes, it would’ve been nice to show you the disassembly video instead of just the before and after. You would’ve probably heard a lot of cursing and bitching about Nvidia if that were true. Because we worked on all kinds of controllers but the controller for the Nvidia Shield TV has to be one of the most annoying to take apart and clean. Anyhow, if you found this blog article useful awesome! If not, we hope you find your answers for controller repair elsewhere.

Until next time, server protect you.