It has landed back on my bench once again.

It pains me whenever something we fixed lands back on our bench once again. Perhaps we should’ve seen the warning signs the first time around. Perhaps we did not test this controller thoroughly enough. Regardless of the error in our ways, the Nvidia controller is back on my bench and this time around it’s finally un-fucked while learning some things around the way.

Care to listen to my multi-thousand-word diatribe? Buckle up and keep on reading!

Video mirrors for part 1 of 3:

Video mirrors for part 3 of 3:

While we performing my first controller disassembly and cleaning of the person that decided to lie to us and in reality found out this individual dumped an entire cup of coffee onto the controller. The initial problem was the buttons were sticking so badly that the “A” button was simply held down for hours at a time. On top of that, the controller was utterly disgusting when we received it last. But now! It’s drifting to the right. Now, this does not sound terrible at first until you realize exactly how much rely on your controller with your Android set-top device.

But instead of adding to the landfill let’s dive back in and take it apart once more.

Now, I will say that the Nvidia forums covered a topic like this. Unfortunately they never really dived in and determined what the problem is. Just there are two things you could do if your controller is drifting:

Then, re-pair the controller. – My article and also the forums advise.

As you could see in the video when we paired it to my Microsoft Surface tablet. The controller automatically moves from the center to the most extreme position.

Calibration is not going to do shit.

If that fails then contact Nvidia to process warranty on your controller – Nvidia Forums.

That’s great if this shield was purchased in 2019. But guess what? It was purchased sometime around 2016. Sooooooo. That’s not really a solution either!

Wow, amazing this device is 4 years old yet it can still play all of the best codecs you can download videos to. Let us hope for Android TV version 10 support so I can at least play 1080p av1 codecs.

It would be irresponsible for any website to not throw up some sort of disclaimer. So here goes; We here at S-Config.com are not responsible for any physical, mental, psychological, or financial damage that takes place by performing this repair. Nor will we accept any responsibility or damages from reading our terrible sentence structures as we continue to improve. If you want a full breakdown of questions and answers feel free to read the FAQ. Now, let us move on!

Click here for the previous blog dealing with dissassembly of the Nvidia Shield Controller.

Instead of sounding like a broken record, we’re just going to refer you back to our original disassembly blog if this is your first time on this site and you are wanting to take it apart this controller hopefully BETTER than what we did. We still take the blame for cracking one of the posts on our controller even though NVidia could’ve used a better plastic shell. 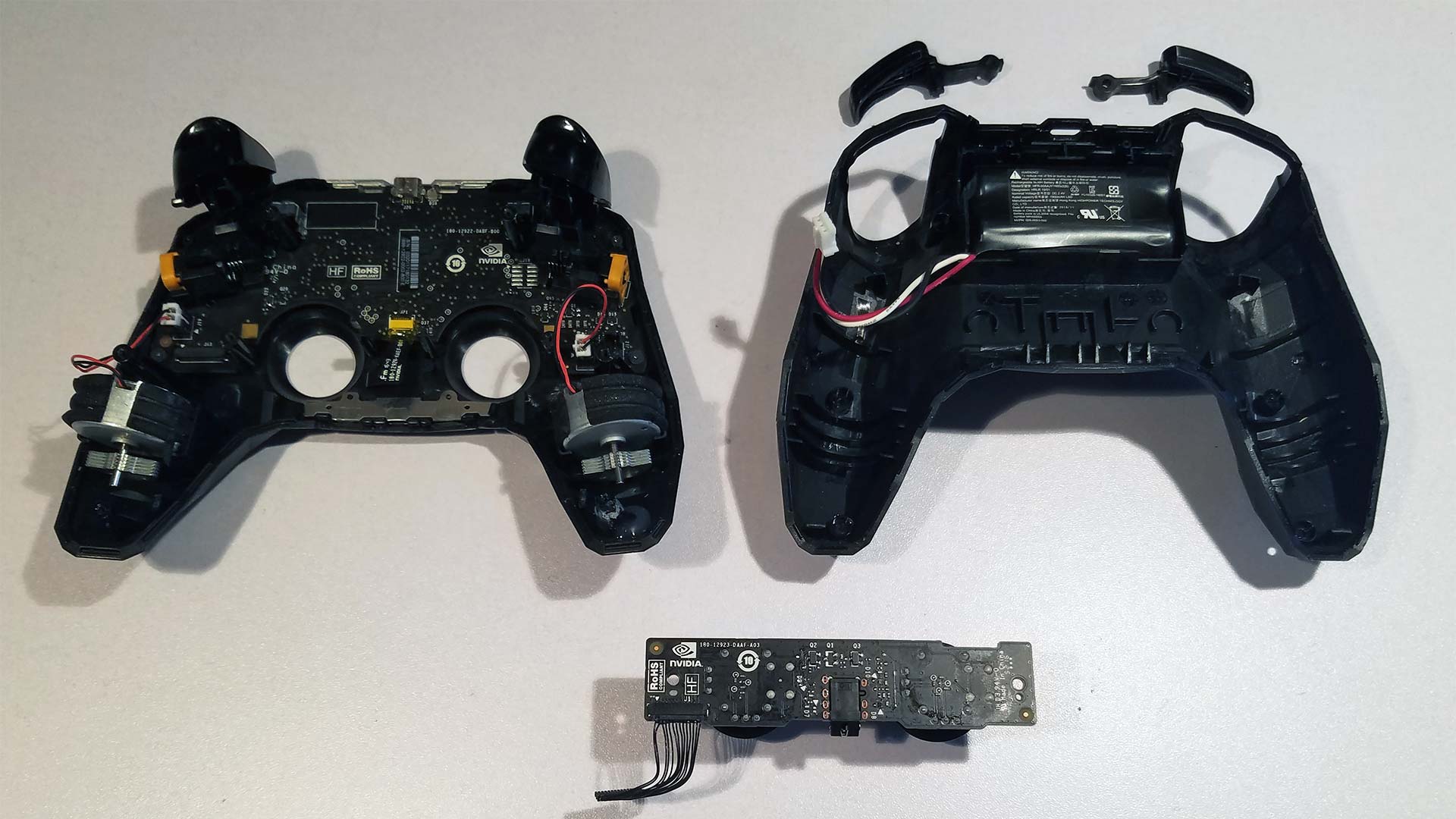 The part that we want to focus on in the board at the center bottom of this picture is the analog hat daughter card and headphone adapter. Since this game-pad uses excessive cell-phone style cabling akin to razor products. So, be as careful as possible when removing the wires. They are incredibly easy to break! 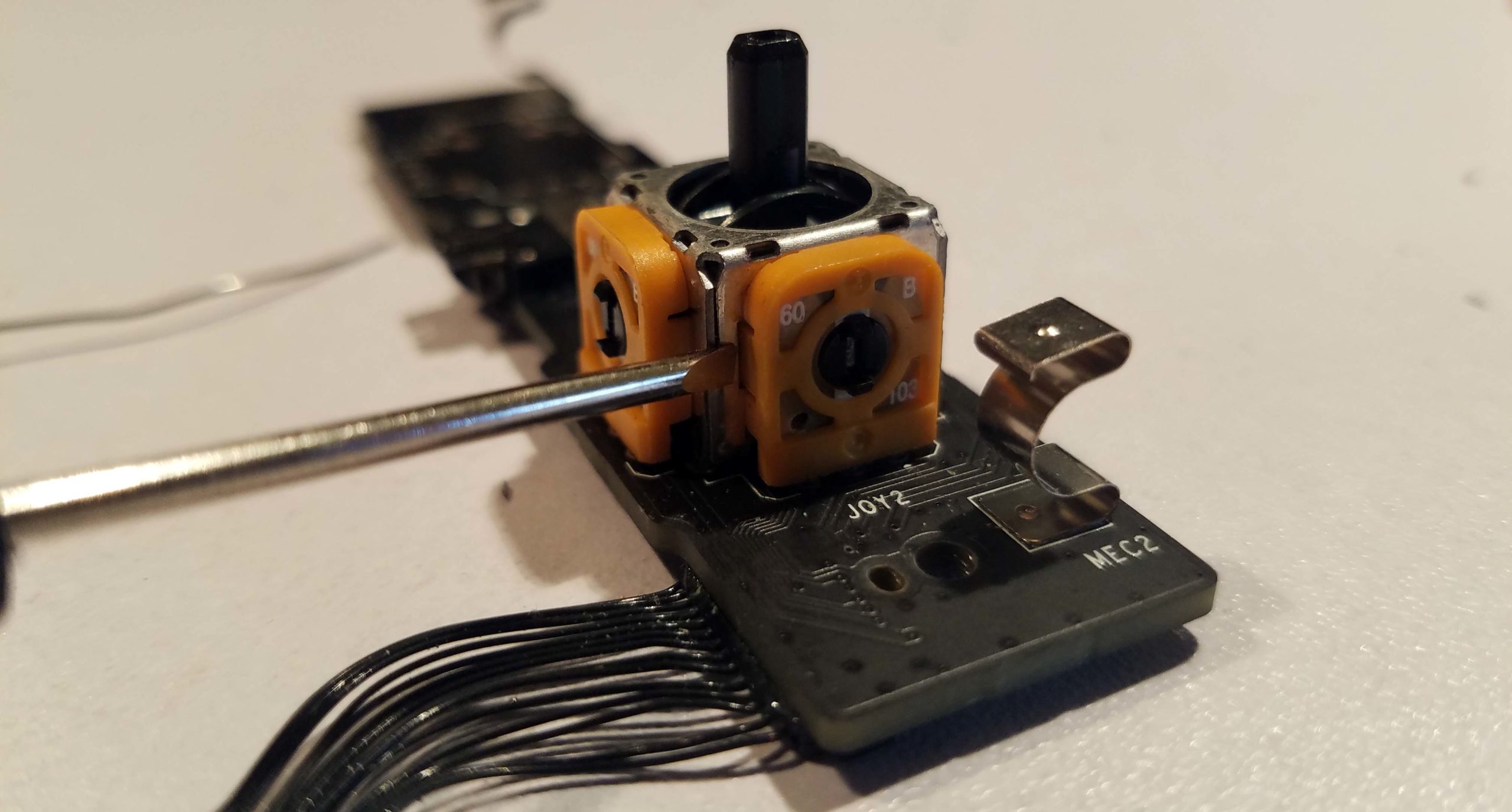 The analog hats Nvidia seems to use are strikingly similar to Tru Components part number: 98002C3

De-Soldering everything on this daughterboard is actually kind of a bitch especially with the ground-plane there. If you are gentle you could save time by simply taking a jeweler’s flathead screwdriver and un-clipping the tabs that lock the potentiometers into the analog casing. Bend them out slightly away from the post and then simply de-solder three pins instead of everything. Because there is something I will say about Nvidia is at least they used an analog hat that had a lot of metal inside instead of some garbage knock-off hat. 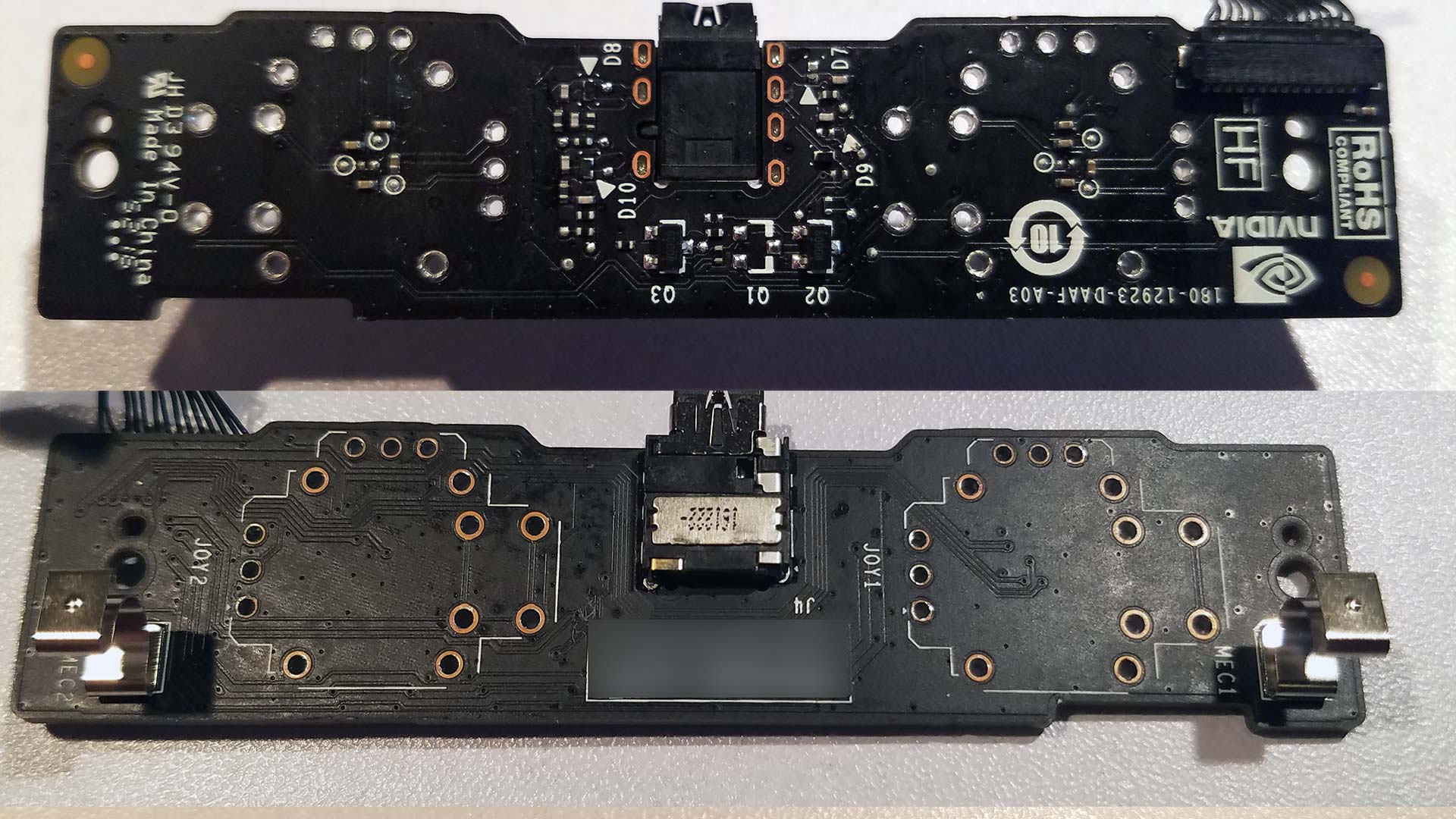 We choose the harder path and with our trusty 600-degree solder station, we decided to remove the entire mechanism. This took a lot of wiggling back and forth to finally remove despite re-flowing the solder into each of the holes and sucking out all of the solders until there was nothing. Oh, and serial numbers blurred to protect the guilty. 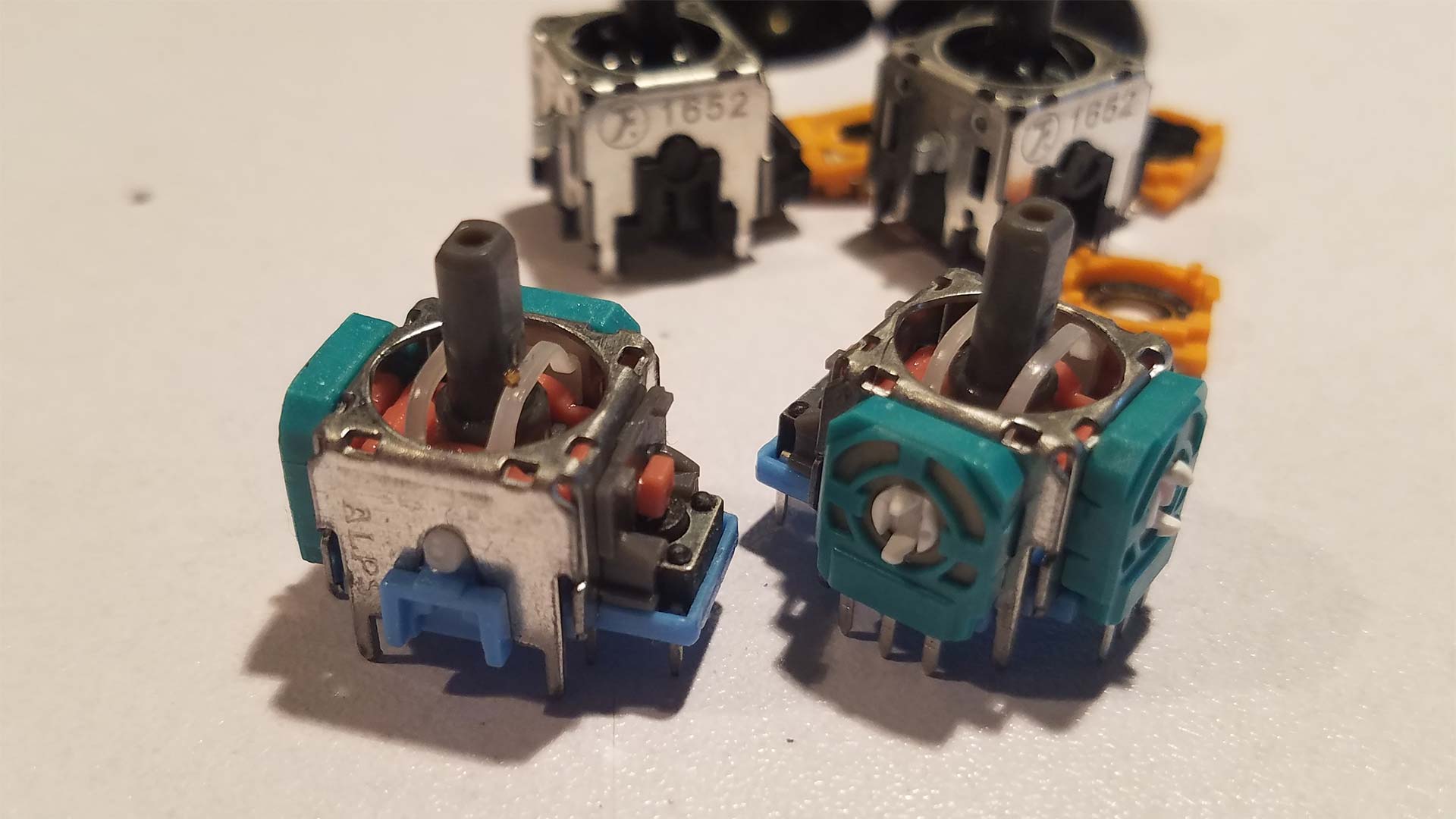 What I thought were legit Alps analog hats. Should’ve paid closer attention to the lack of numbering on the potentiometers themselves.

The hats did not come off clean but they at least came off without leaving any trace of damage on the board. Now at the time, we did not know what was about to happen next. But we went through an American vendor in the hopes of getting a trusted brand of analog hats. What we got was indeed Alps mechanics. The same brand was heavily used during the Xbox 360 era. But with no name potentiometers. Let’s just say we’ll pay a terrible price for that in a moment. 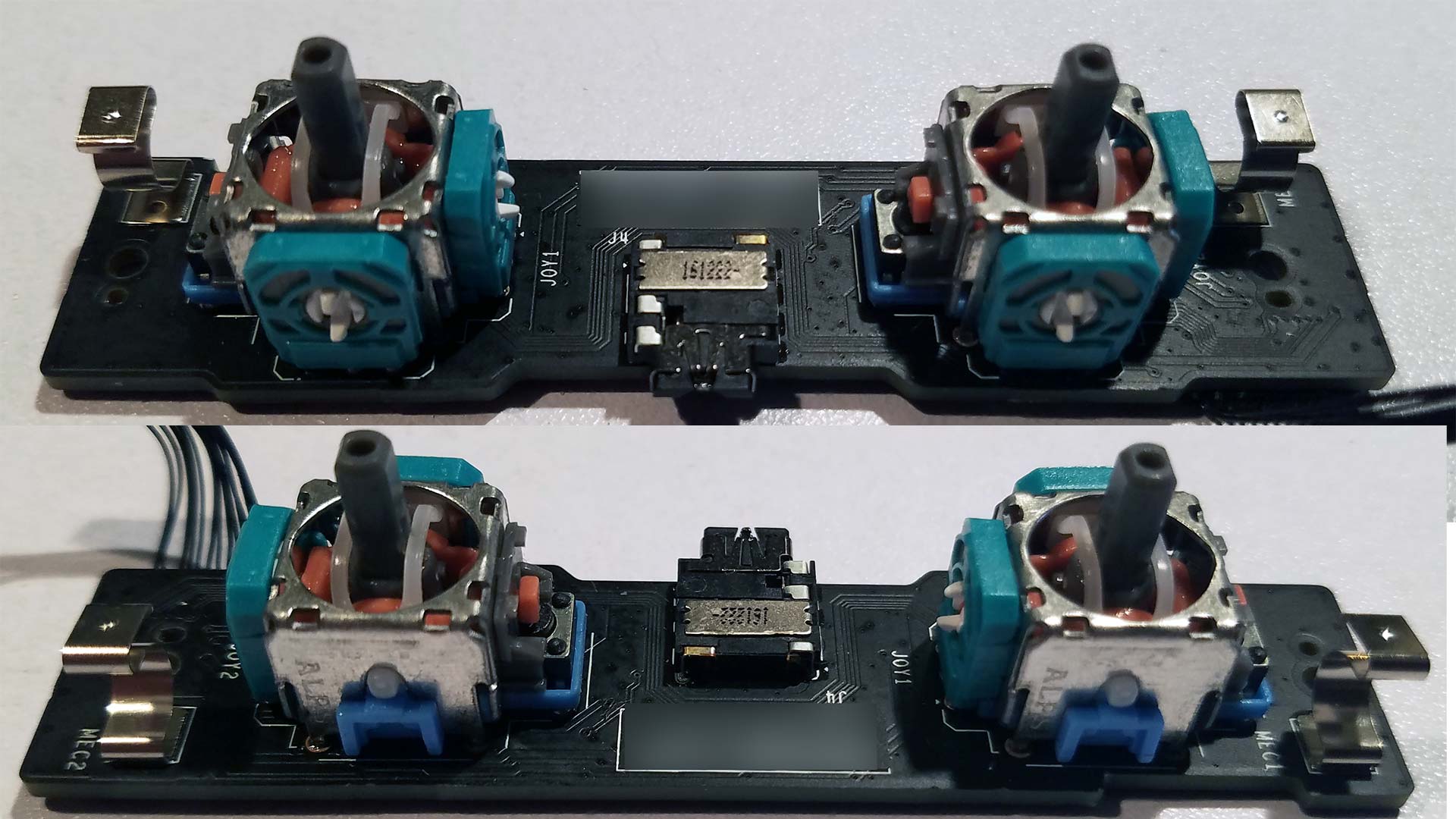 I must stress that when you re-install these hats to keep them as level and pressed down to the board as possible. If it rises up even by 1mm it can result in the enclosure not closing or dragging action on the hat as it brushes against the outer case.

This would be the point where we would show you a video that’s fixed and it’s awesome.

Wow, this is unexpected.

But as you could probably see in the video posted above. No, we are in fact not done. For starters when we move around the stick you’ll see that we’re having a really hard time keeping it in between absolute zero and extreme left-right-up-down. The Chinese call this ‘super-sensitive but we call this a bootleg product that fails to perform like even an Xbox 360 joystick. There’s even an added effect where when we move the joystick from left to right it almost bows upward instead of going left-right. This may be totally fine if you are using your controller for simple games like point and clicks and/or if you don’t use your shield for gaming and instead just want Kodi to stop drifting to the right. In that case, the bootlegs did their job. But using this joystick in twin-stick shooter games is an absolute nightmare.

So, I was left with two options. Either order MORE analog hat sticks and hope the next batch from a different US vendor isn’t more shitty china knock-offs or see what’s going on with the original pots since they seem to almost fall apart as we removed them off of the PCB. 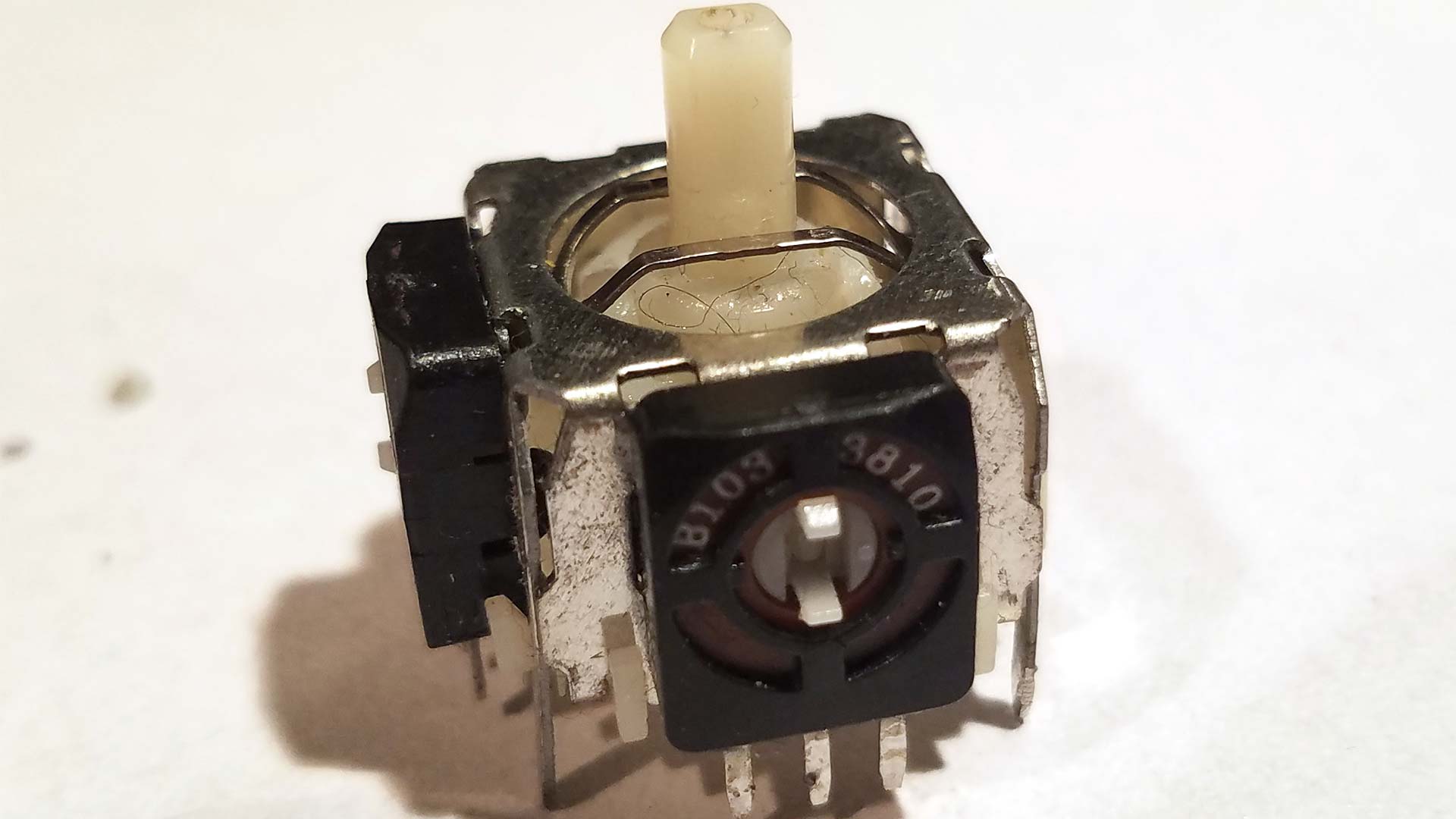 Getting inside of those existing potentiometers is actually really easy regardless of what joystick you are fixing. Once you’ve pressed the two clips on the side to remove the pots from the mechanical housing. Simply press the tabs in the center together in the center of the potentiometer and the metal spring will release inside allowing you to see inside. 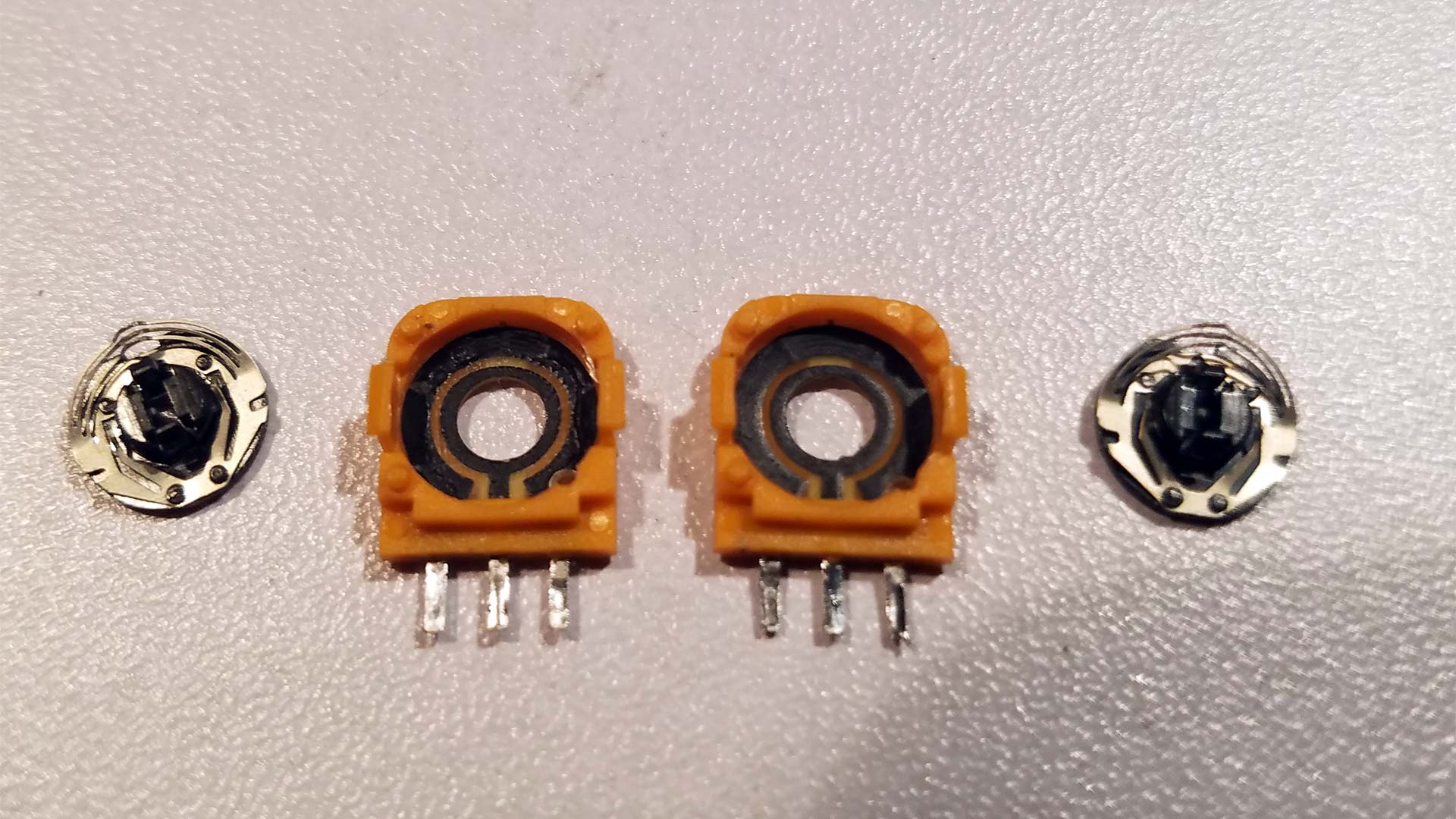 Now how these things work is there’s a piece of metal with three fork-like posts that slide back and forth on these carbon rails acting as a variable resistor. As the dial turns it moves up and down these rails provided new values of resistance that your microchip picks up and transfer to your game. Keep in mind that these are the original Nvidia Shield controller potentiometers. The ones up top don’t look half bad. These came out of the right hat. the one that was not drifting. Still going to clean them! 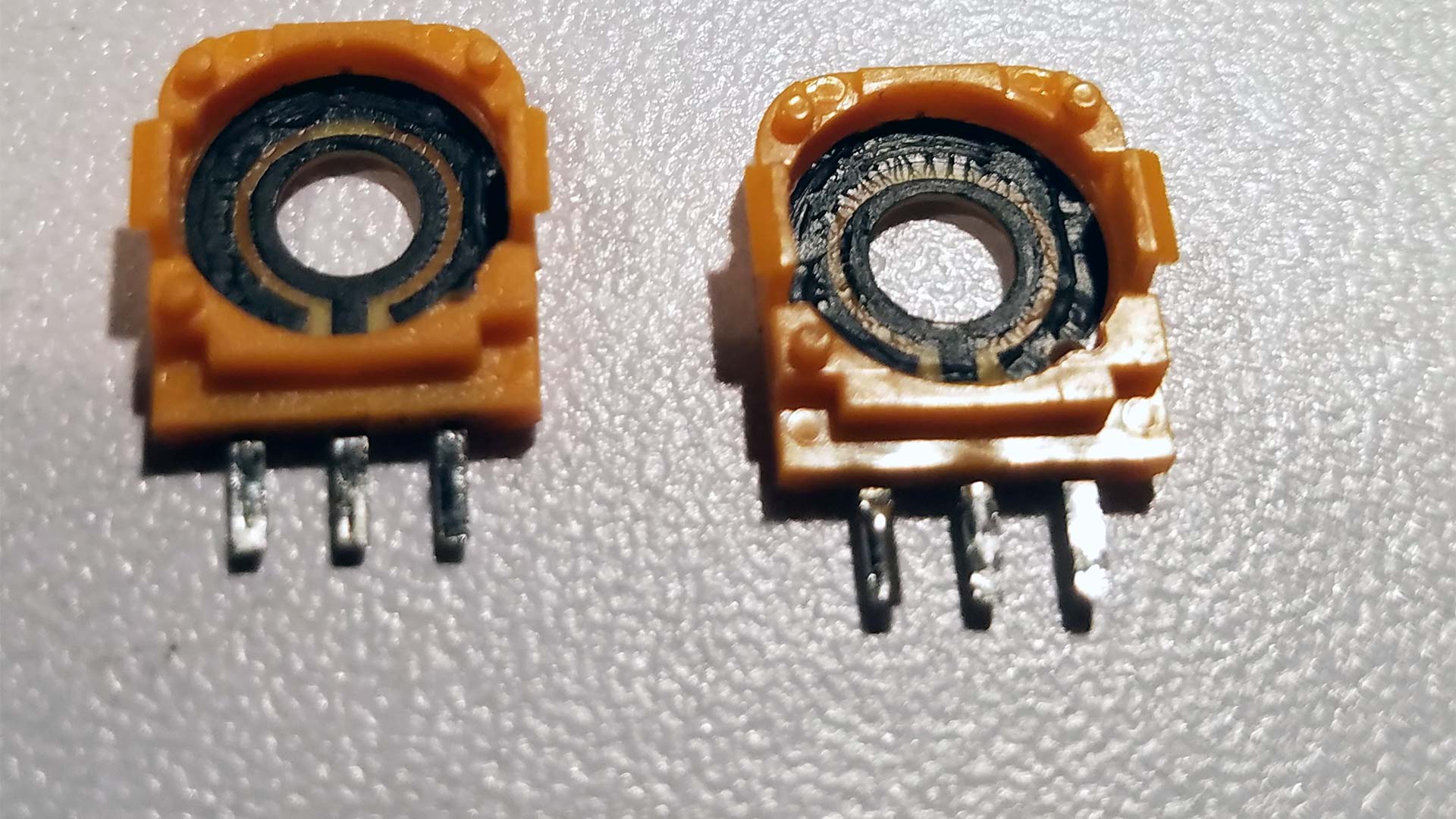 The left hat is another story completely. We’re not entirely sure if it’s the same kind of cleaner as the pot-cleaner that you use on mixer boards. But the hair-line strands indicate the two are touching on another all by themselves.

Given the abuse of this controller in the past (spilled coffee) one could conclude that this grease is now conductive. Making our Nvidia joystick drift across the screen without the aid of the metal spring. 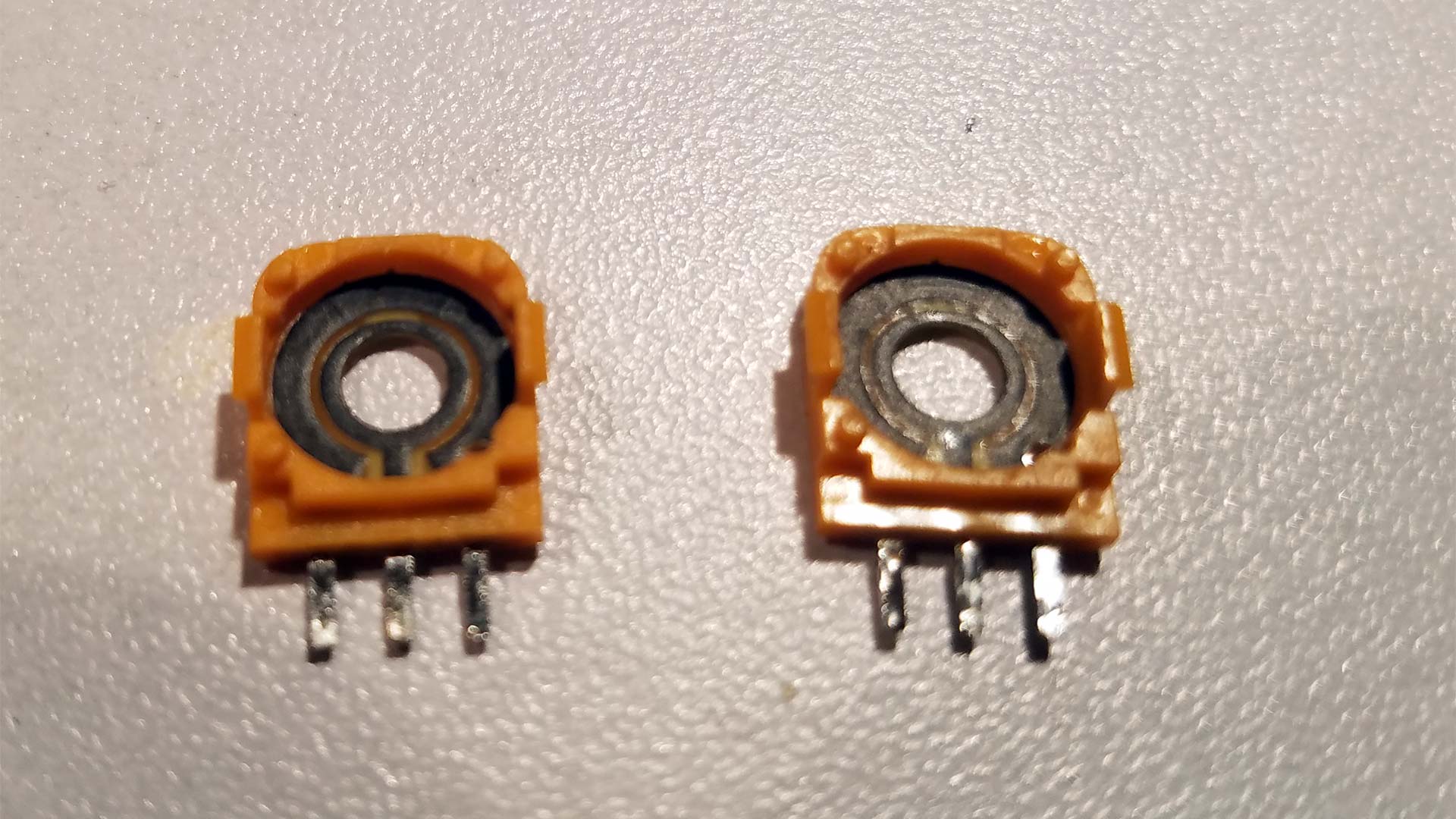 Apologies for the slightly out-of-focus shot. But with a bit of denatured alcohol and a q-tip. We are able to very easily clean all of that black crap out of the pots and make them look new and shiny with nothing touching the inner and outer rings. Will cleaning the grease out depreciate the life of the pots? Time will tell on this one! Given how the first set looks it seems like there should be no fluid or black stuff in there in the first place! Now, it’s just a matter of assembling them and giving it a try!

As repair technicians, we always tend to lean towards “Replacing” the part instead of just repairing it given the cost of these parts is in pennies. However, since I was backed into a corner on this with the person owning this controller expecting it back the same day. I’m happy to report that the drifting issue has all but gone away. I hear no noise off of the now bare contacts and they can now relax knowing that when they press the sleep button on their Nvidia Shield it will in fact go to sleep. Will the controller last for years to come? *shrug* You got me! But for now, it’s better than dropping $50(USD) to Nvidia for another controller.

Anyhow, if you found it useful sweet. If any of you guys know a great arcade vendor that sells legit analog hats leave it in the comments below.

We thank you for checking out this blog and until next time. Server protect you.

8 thoughts on “Drifting analogs – The return of the shield controller.”