Slander from Google is fun kids!

Earlier this month we produced a blog article illustrating how we screwed up. It was simple, educational, and it really hits close to the homes of independent blogging and website building on how much goes through a single organization which is Google. More importantly, how many websites that piggy-back onto the giant and just happy accept their data as pure truth instead of questioning its overall legitimacy. From a scarier point of view the bots are doing exactly what they are programmed to do and in turn are becoming scape-goat for corporate greed.

To which if AI is going to take the fall for human corruption. Well! Guess that’s ANOTHER reason why robots should wipe us off of the face of the earth!

The point is we want to show you some classic Google incompetence and how everyone accepts this is as “just another day on the internet” when the more appropriate response should be outrage.

S-Config.com hosts a lot of binaries here because frankly there is no other platform to serve the content like we do here. Binaries for game-mods to music to patches in software to make things run better. We host a lot of binary level data. All binary data here is encapsulated in 7-zip as a standard that we move forward with in the future instead of clinging onto the dark-ages of .ZIP files.

We got an e-mail popping into my box stating that Google has flagged my site and that I should go to my webmaster site to learn more.

Wow, we haven’t used the google webmaster tool in almost 4 years. Partially because we made the promise to our readers to never use or give out tracking information to third party sites. It appears that Google is still tracking people. Just that they’re tracking people from the search engine coming inward towards my site. Obviously a lot of you aren’t using anonymous search engines and are feeding the pig which is Google. Shame on those who are doing that BTW.

At least go with DuckDuckGo. They’re equally as incompetent as Google by recommending video’s to YouTube instead of promoting those that host their own videos. But at least your not getting your browser totally fucked with tracking cookies from Google.

Your “Uncommon Downloads” are an enemy of the state. 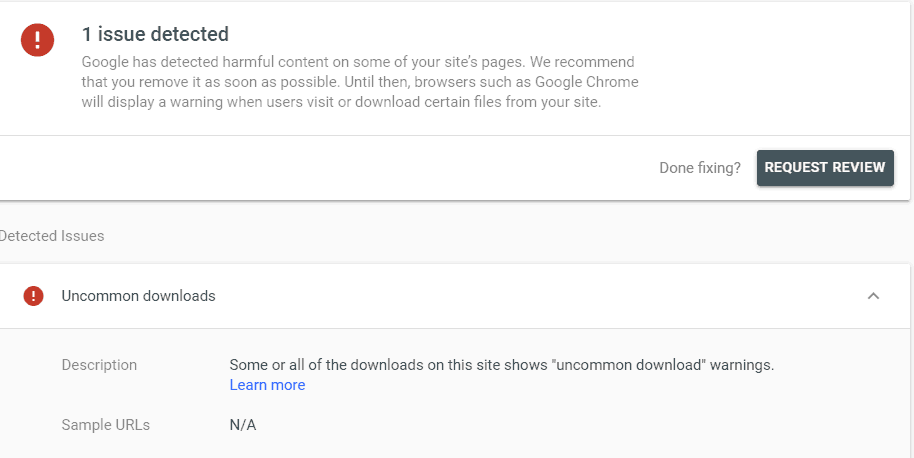 This is the warning that I received in my Google Webmaster tool after 4 years of abandonment. Now if this is Googles idea of getting users to come back to their system I suppose they won on that regards it doesn’t mean that I will just shut-up and stay quiet about it.

Here you have a classic example of vague Google being vague. Saying that it found an issue! But it’s not going to tell you exactly where the issue is found or how the hell to fix it. They will go as far as to say that they will flag your content in their Google Chrome browser as dangerous.

This almost reminds me of another function of google called the “Transparency Report” that we discussed in a previous blog educating readers that our site is not a phishing or hack site. Or better yet my YouTube copyright issue after public domain music was used in a video game that sparked a claim. To which it seemed after days of publishing that article Google prudently changed their minds on the Transparency Report as well with no explanation given.

Checking out some of the forums on similar people with this problem. It usually ends with a supposed representative from Google saying:

“Just click on review anyways. Or don’t. It’ll go away on its own.”

To which no, the ambivalent attitude is not the right approach to have when you’re sitting there threatening to throw up a giant red blocking page scaring the hell out of every reader that comes to your site. You’re screwing with peoples lives and the way information is handled.

The Google Webmaster site gives you the option that if you’re done fixing (What the hell were we supposed to fix in the first place?!?) to request review which we did. It popped up a dialog box asking why should they perform a review on my site to which we stated that we’re simply not going to change a damned thing until you explain which uncommon downloads are they referring to.

Google forgives but never-ever does it explain or apologize!

Google has received and processed your security review request. Google systems indicate that / no longer contains links to harmful sites or downloads. The warnings visible to users are being removed from your site. This may take a few hours to happen. – soulless Google bot canned message system.

Within 24 hours of submitting my review it was processed and passed! Should we be happy for this? That Google has forgiven us over something that Google can’t even prove? That we changed nothing except slammed a ‘review’ button? Was it even necessary to slam that review button or would Google continue to slander my site from users if we had simply ignored it? There’s a fine line between willful incompetence and straight up diabolical sabotage. Google has demonstrated to us over and over again this attitude. That us, web designers, are doing something wrong without ever accepting blame themselves. Without being held to the same standards as they hold onto us like with the Google AMP project.

Do as we say but not as we do!

Oh by the way. At the end Google decides to lecture me that web designer and blogger how to run my site. By asking us to take a look at rule number 2 and click that blue button to Read Policy. Want to know where that goes?

It 301 redirects to about.google instead of taking you to the policy page of what Google considers acceptable downloads. To which about google is more psi-op marketing campaigns of how it failed its mission before it even started.

There is a reason after-all as to why we have a robots.txt file on the base of our homepage.  That perhaps there’s some things on this site that we don’t want you to organize or catalog! To which we know that Google and most other search engines view the robots.txt file as a kind suggestion and not an absolute rule. You are overstepping your authority Google, fuck off.

This will probably not be the last time Google does this. If anything it will probably get worse the more Google Search ends up becoming like their sister company YouTube. That they’ll probably want to pave the way for a better internet by simply removing the value of owning a domain name. And instead, ADDING VALUE to being apart of a reputation system.

After-all when you control 80 percent of the information on the planet it’s easy to sit back with your own custom applications and tell users to simply not go to some site over suspect goods you cannot even prove! That a user should not accept from any company that has software presented to them as safe. They should have the common sense to have a virus checker and inspect it for themselves.

Educated customers buy less so fuck it. Full speed with hyper-consumption based capitalism.

Organization of information is handy but how you organize said information determines if what you are doing is altruistic of just flat out evil. To which Google IS EVIL. They used the policies that made them popular in the early 2000’s like toilet paper now.

This is all server has to say.

2 thoughts on “Google’s uncommon downloads and where to find them.”