LED RGB Lighting is almost like some project you put on Pinterest. But it’s going here because we make it! Screw image aggregate services that seek to control the internet. We wanted something in the living room for those nights where we want to relive music videos of girls putting up lipstick while a guy in a gimp suit dances in front of us. We’re both the ones with the makeup AND inside of the suit at the same time! More accurately in those music videos, they use 3-point lighting. Blue, Red, and a Natural white.

This latest blog entry deals with me getting all “basic-boi” and the simple fact that we didn’t want to go out and buy a 100+ US dollar Phillips RGB LED mood-light bulb for my living room. Probably also because we would have to be anywhere from two to four of them to which we’re sorry. Not paying $300+ for lights that just “set the mood.” Especially when I have a lot of the materials to make the lighting, to begin with. So let’s see if we can show you to the best of our abilities how to do this. Read on if you want to know more.

Tools and equipment of the trade. 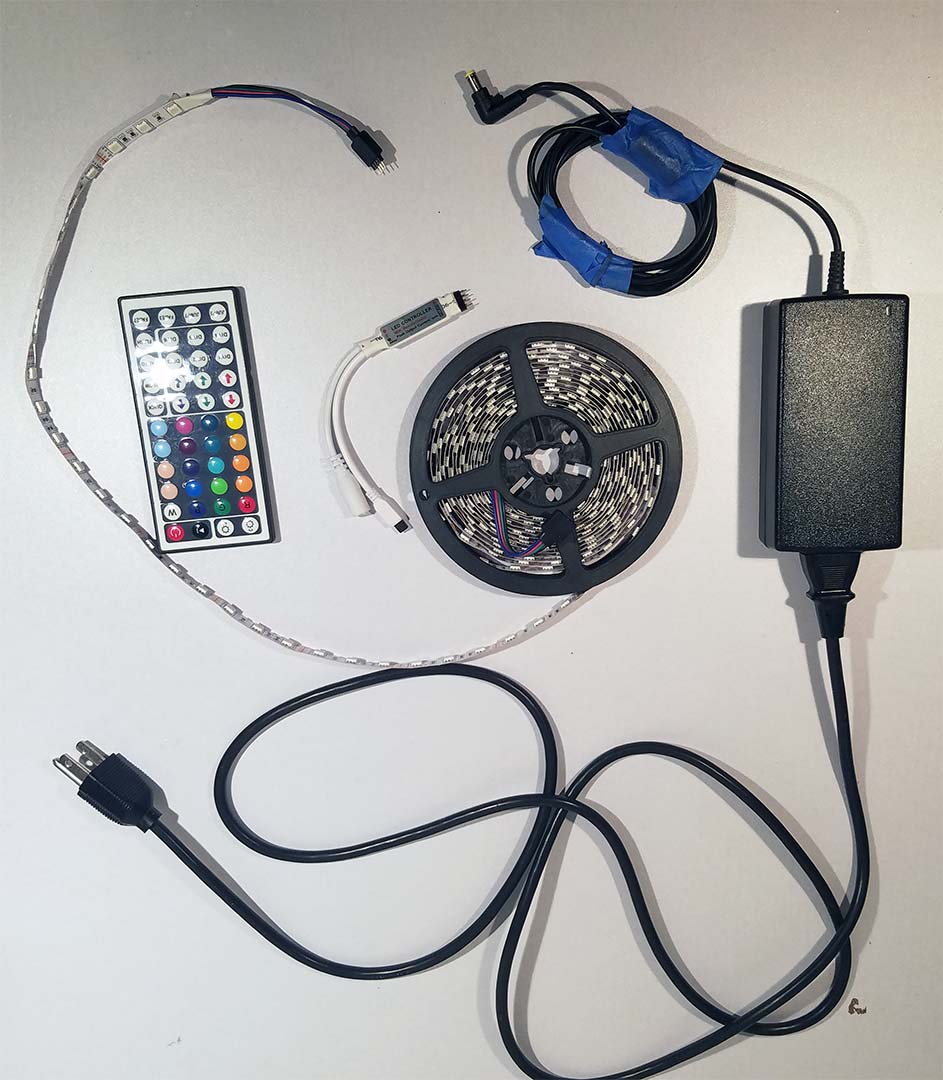 Okay, so let’s start with the very base of this project which is the lights themselves as well as a means to power it all up.

Other tools of the trade.

You will also need the following equipment for general tools:

Assembly of the LED lighting system.

Probably the first thing you want to do is drill the holes in the side of aluminum big enough to fit your machine bolts in there. If your screws fit in perfectly then great you don’t need to use the drill on another. Once you’ve made it to where your screws fit and your aluminum bar can be easily mounted on the side of your wall. This is where the fun of assembly comes into play. 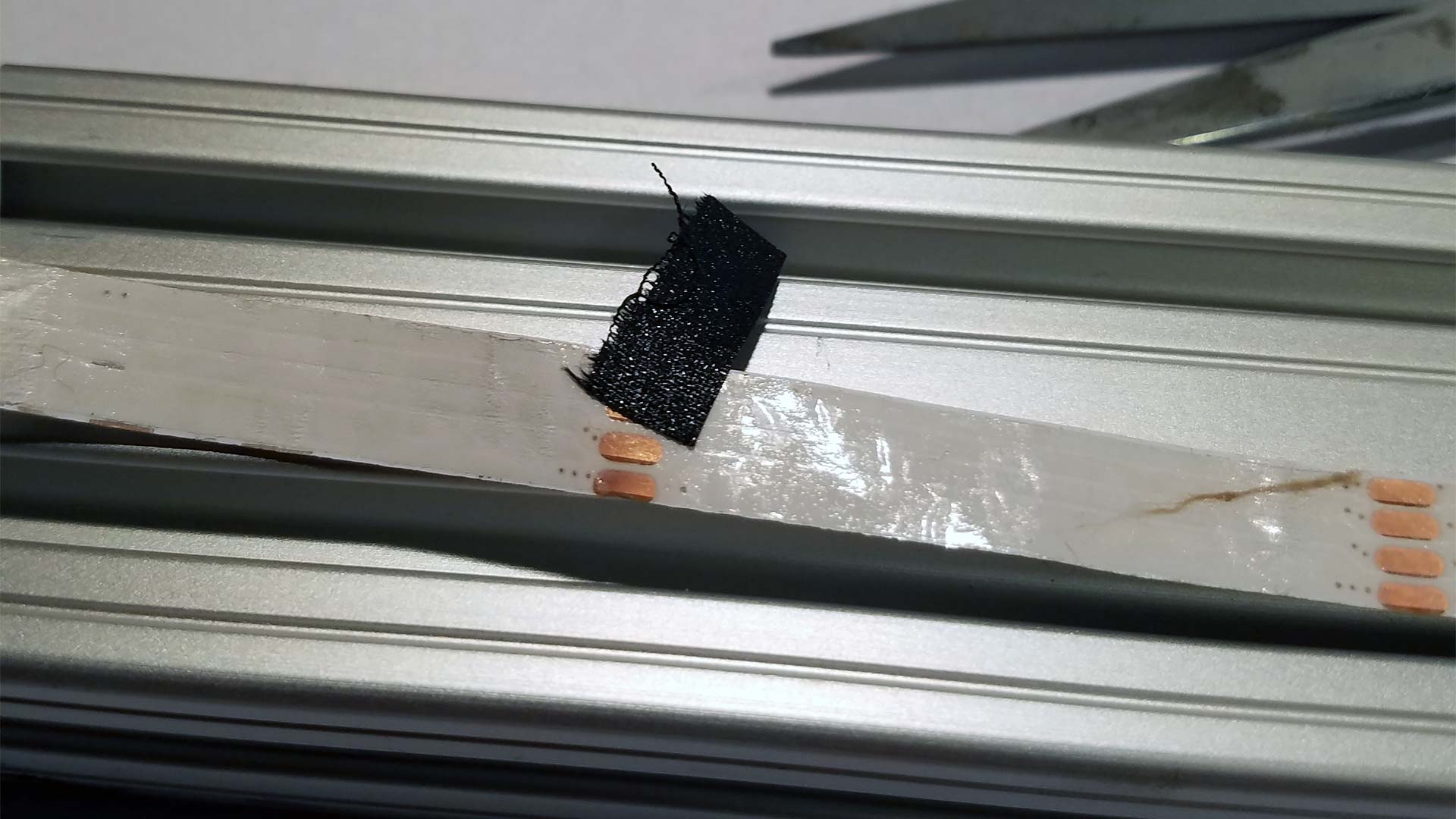 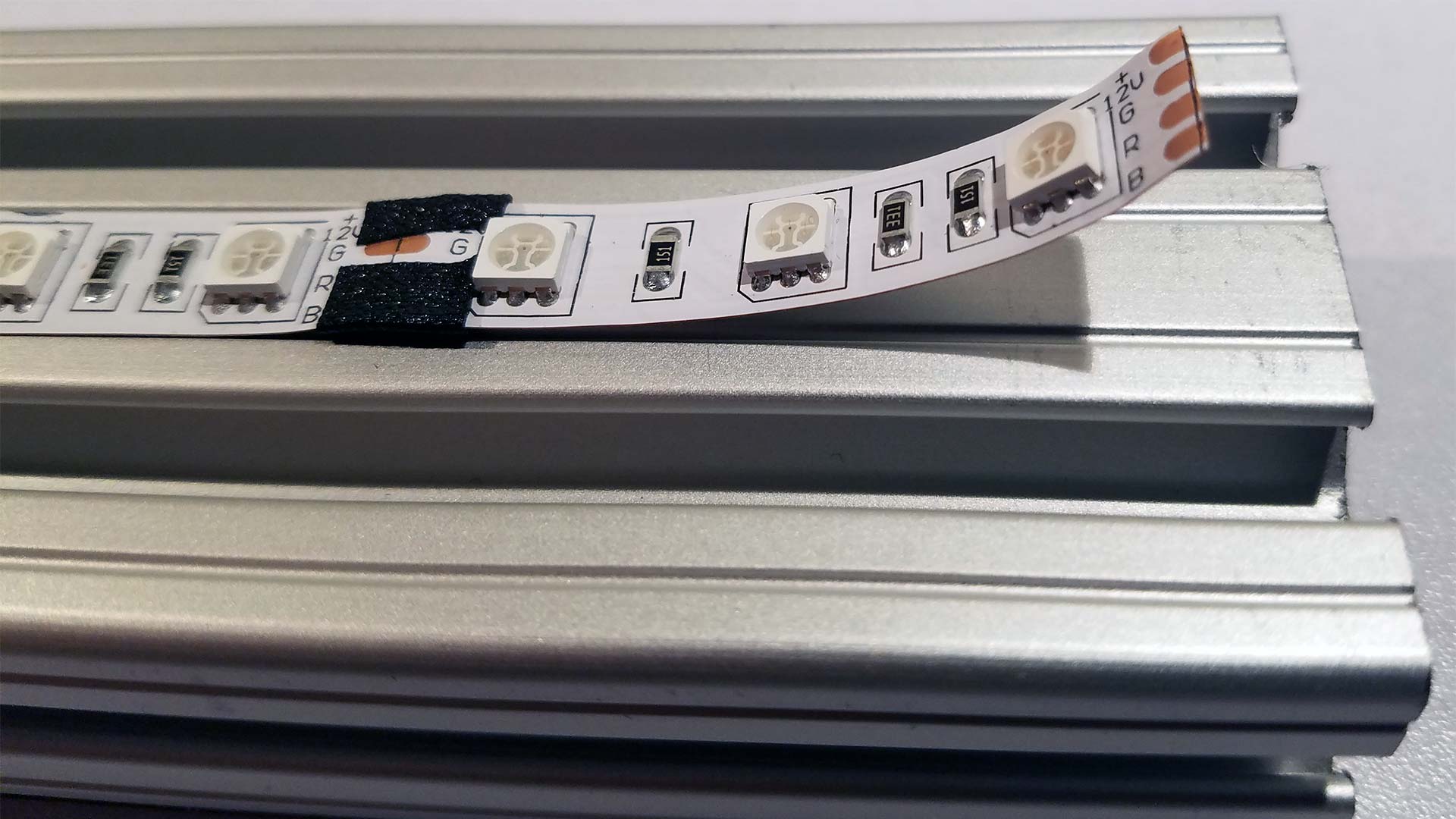 Now if you want you could sand the aluminum a little bit to give it the kind of grip that most glues would come to expect. But it’s important to leave the ends free for soldering. Later on, we will wrap the ends aluminum to further protect the areas where wiring is exposed. 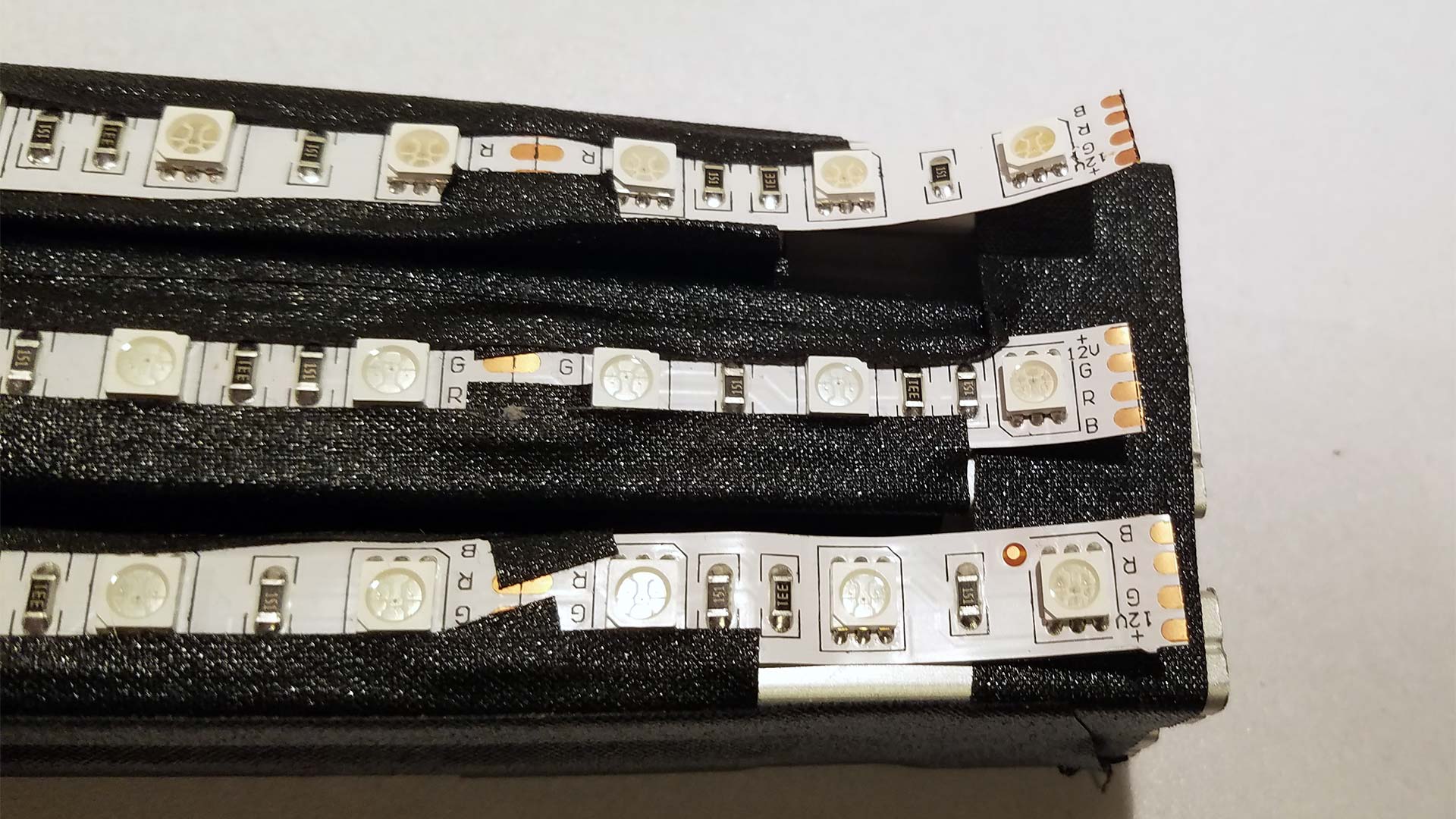 After that, we just simply repeat the steps by adding two more strips lining them up with the aluminum tubing as best as we can. In hindsight, there are a few things that we could’ve done differently. One of them is to have to tire such as the +12v, G, R, B face the same way to avoid any wiring issues. Another issue is we should’ve just said fuck it and removed the crappy double-sided tape china gave us and just lined the aluminum tubing with heat-sink grease since we’re going to use other means or keeping the strips onto the metal such as the use of tape and later on zip-ties. Also, when attaching the zip-ties we did it over the contact portions of the LED strips so that the zip-ties are not crushing any crucial components during the build. 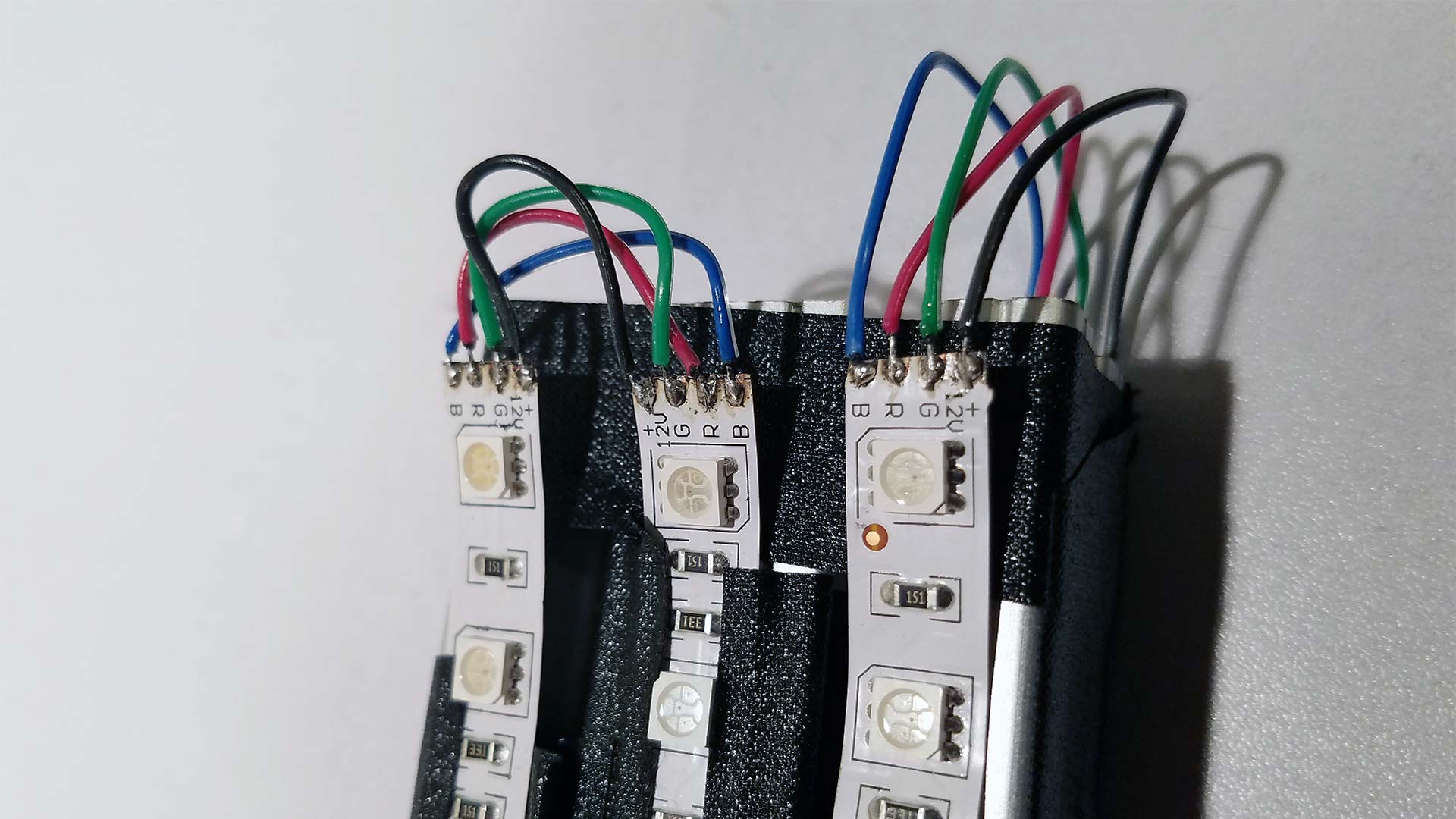 Now we simply bust out some extra wire and solder this bad boy together. I put two strips of LED’s one side of my aluminum extrusion and then three on the other. The three will be beaming up at the ceiling of my living room so I figure we should give it a little more LEDs for it to bounce. And the two LED’s will shine on the walls and hit the floor. There’s a set of wires that cross down to the bottom LED’s which is okay and will be hidden by the board plate which will come later in the article. 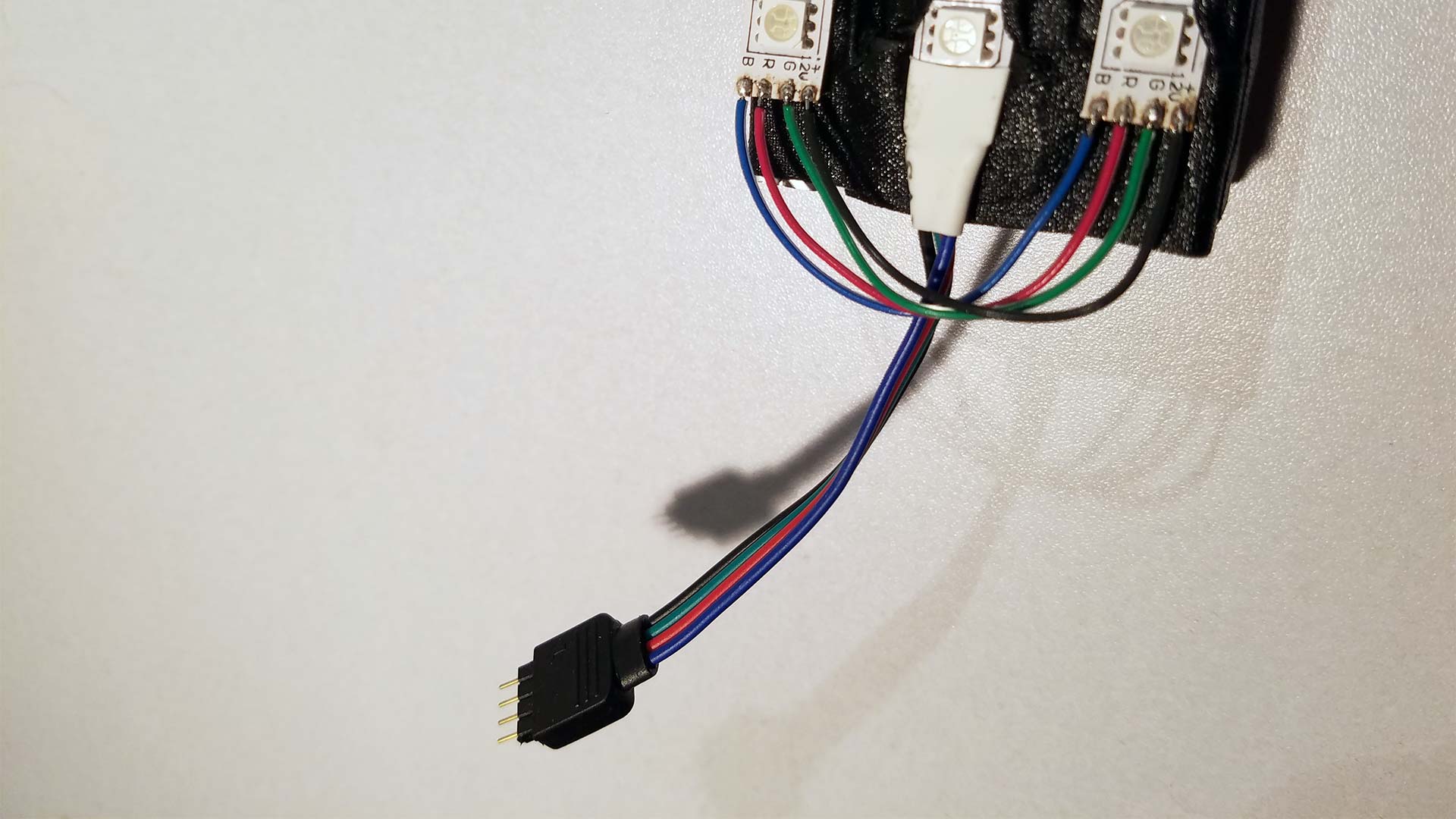 For those wondering how this connects to the controller there you go. We simply left the pre-soldered end attached and will connect it to our controller later. 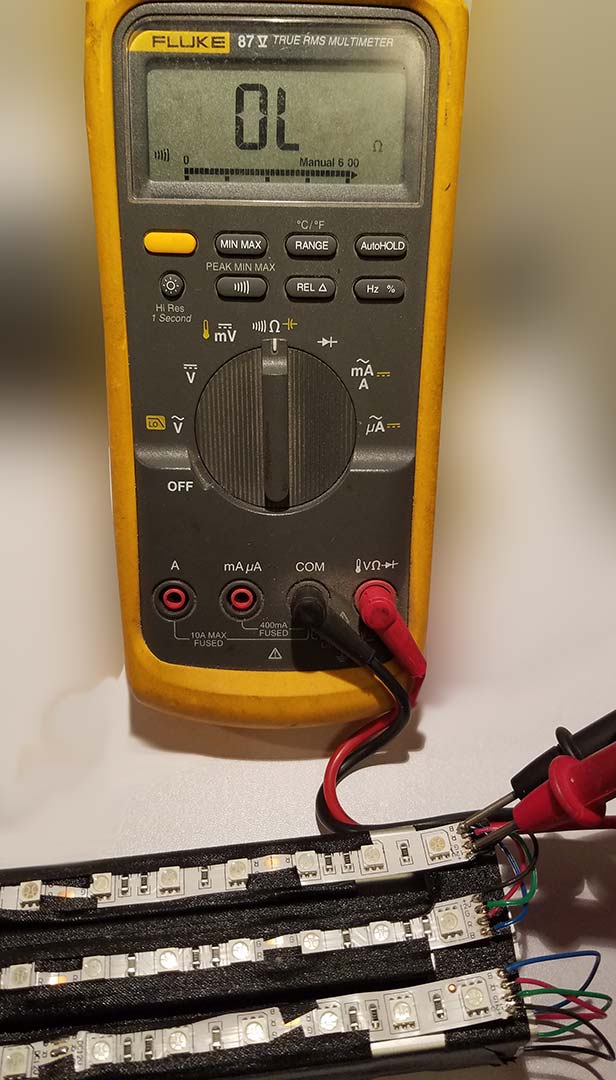 As a final precaution before we hook it to our LED controller and power supply. We are going to use our multi-meter and set it to continuity mode to check to see the ground and any of the hot wires are connecting at all. This is super-important because between the grounding of the aluminum and the solder work of the wires the last thing we want is to have any shorts within our circuit. Also, there’s no excuse to NOT have a multi-meter as you could easily pick up a cheap one from a hardware store ranging anywhere from five to ten U.S. Dollars. 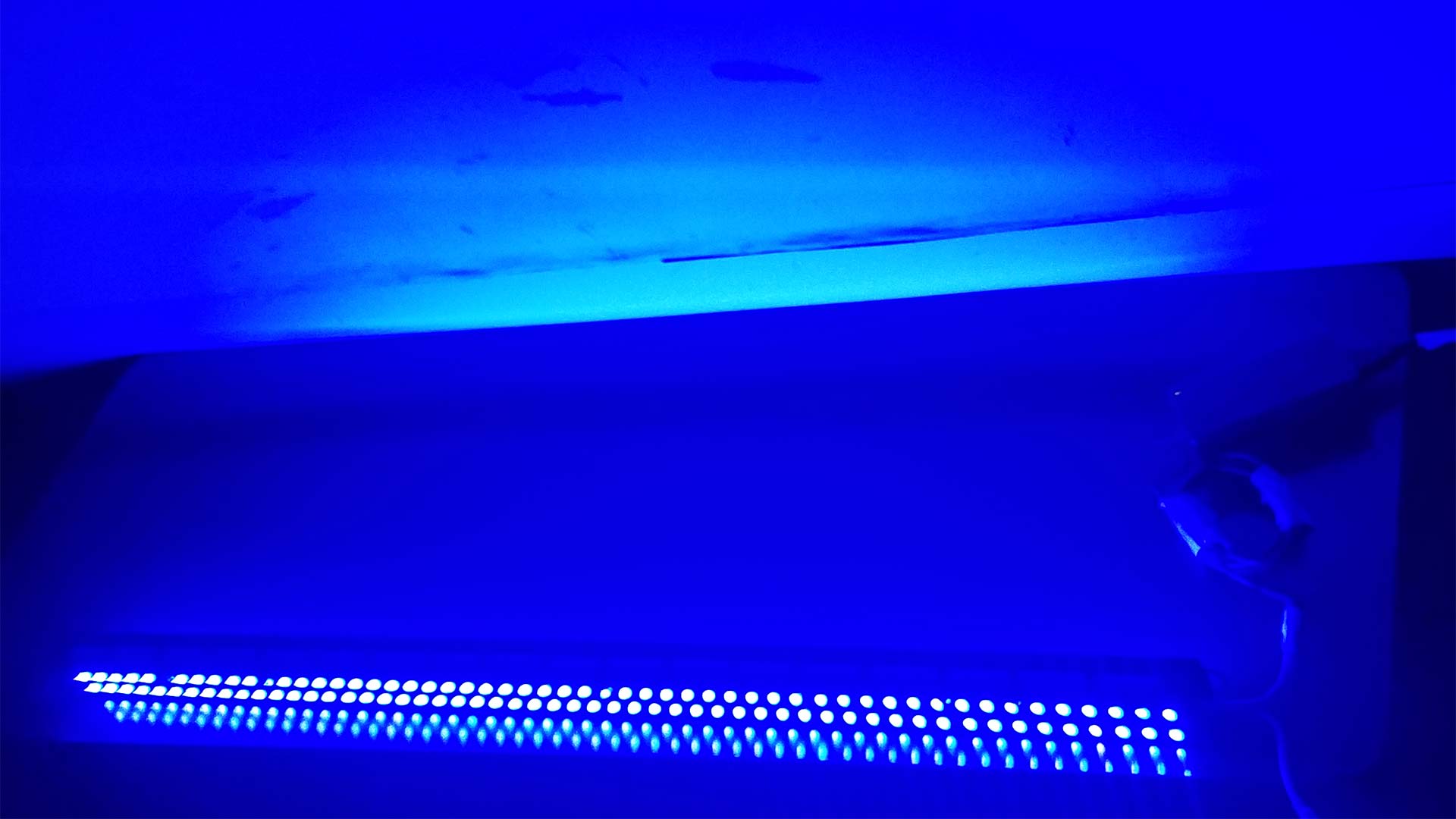 Apologies for the terrible camera work while trying to capture this. But we placed our newly constructed project onto a table and powered it up. Letting the lights cycle from color to color for a solid 24 hours WITH supervision! This is called a burn-in test. we want to make sure that the aluminum is doing its job distributing heat and that none of the lights are burning out during this test. This picture is good because you could see that a few lights don’t look like they are working.

That was actually because some of the tape peeled up and blocked the lighting. So after a bit of Exacto blade action, we were able to correct that with the quickness. Also for those wondering why there are two strips. That’s the bottom of the light. The one with the three strips is facing the wall. and bouncing light off of it hard as it should!

The deflection plate for our RGB LED Lights. 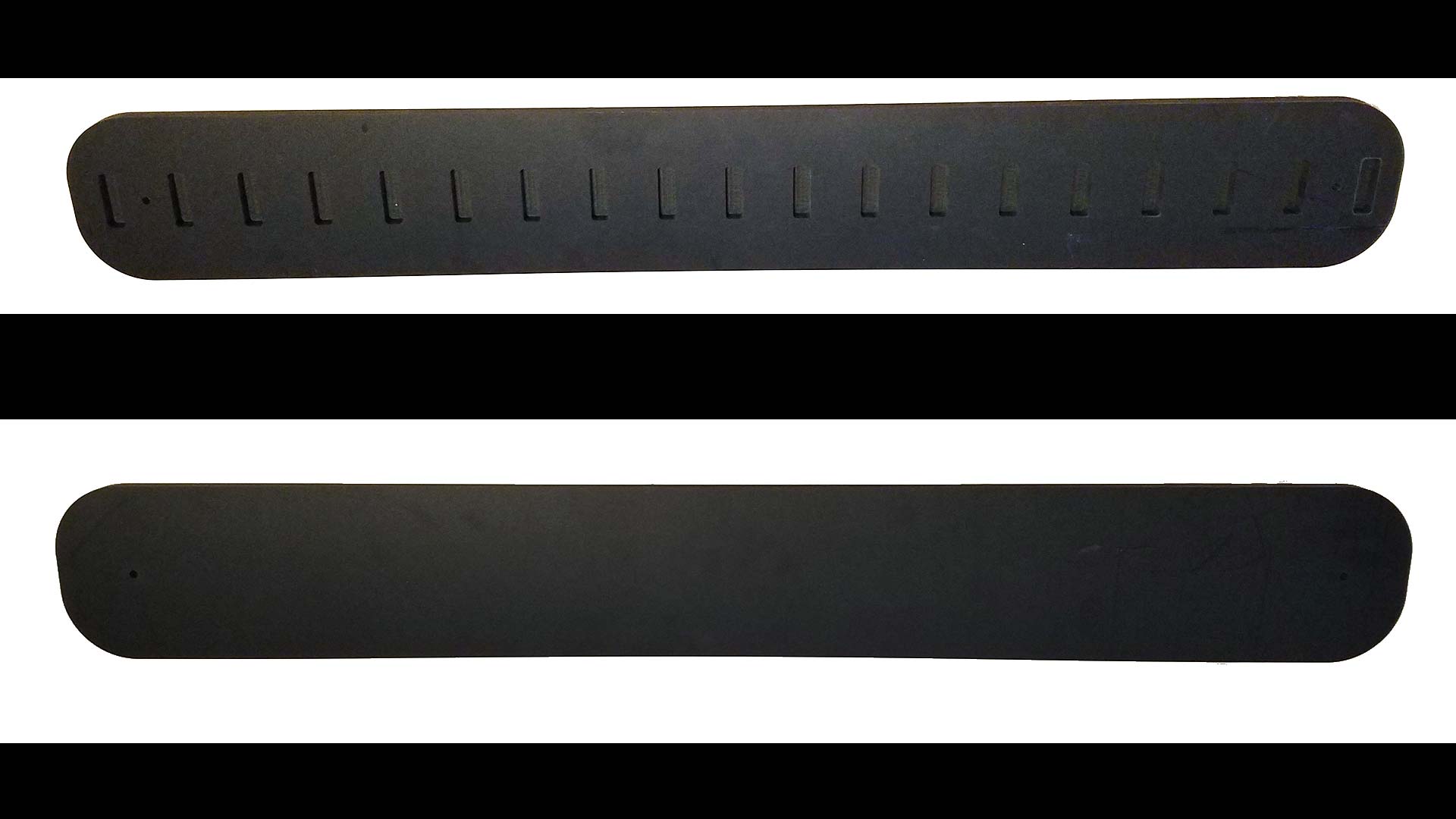 The deflection plate is something we cut out using “Grandma’s Router” but you can use something like a RotoZip or a hand Rotary tool to accomplish the same task as well. The slots along the inside are engraved 1/8th of an inch with 2-inch spacing to match the zip-ties that wrap about the aluminum extrusion that we added for support. Finally. we placed two quarter-inch holes into the foam where the machine screws are going to go through and bolt into the lighting system.

Because we’ve chosen a black material that aesthetically looks good. Black absorbs light. We are losing some of our ambient radiance because we choose to place something over our LED lights instead of staring directly at the LED strips in our living room getting spots in our eyes. Crazy us right?!? A way of reclaiming that light back is by putting something either white or highly reflective on the side where it shines. In our chase, we choose to use aluminum tape to get the most out of our LED strips. It was exceptionally hard to get a before/after picture of the results as the camera’s light compensation was fighting us. But it is highly noticeable and we recommend applying some sort of backing to deflect the light and get the most out of your setup. 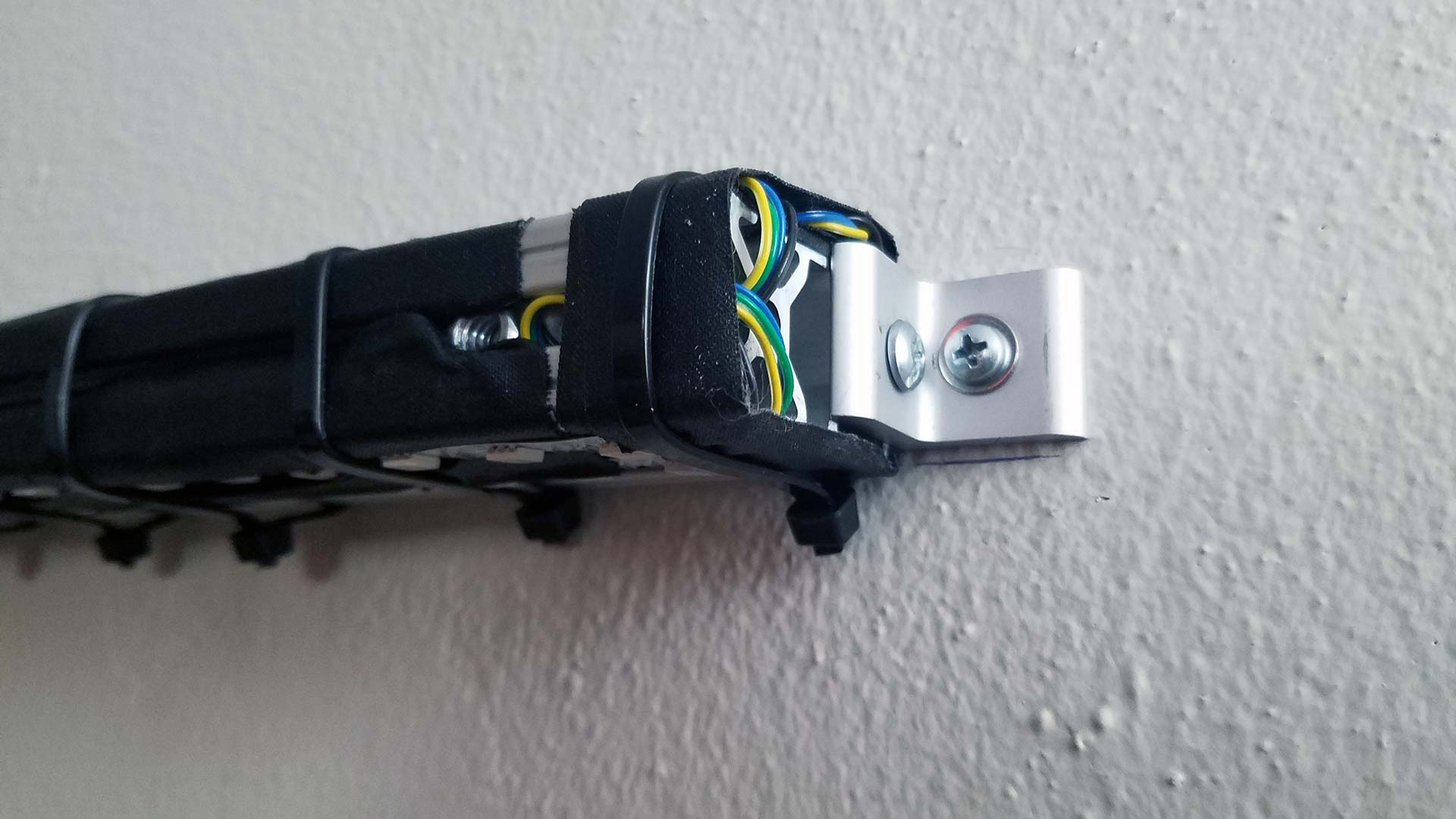 The first thing we did was getting a nut into the aluminum. This involved us using a carbide sanding disc as the nut didn’t want to immediately go into the aluminum. Of course, we could’ve bought the official Fastek nuts that fit right into the slots and saved ourselves a world of headaches but where is the fun in that? Then, we tuck the wires away as neat as we could and proceed with drilling our hole into the dry-wall and placing a plastic stud where our screw will go into. We wouldn’t recommend just dropping a screw into a wall without that plastic stud because it could fall out from the weight. Finally, we placed out foam board plating on and we are done! Easy peasy! As for the piss poor cable management well! That’s the perils of living in an apartment complex where you can’t embed power supplies into the walls or rig an AC Outlet just behind your lighting.

Would we recommend this project as a cost savings over simplifying buying a Phillips LED bulb? No! If I had to pay for the scrap aluminum as well as the power supplies combined with all of the equipment to put it all together that I didn’t already have. We would say this would be a terrible investment to add RBG level aesthetics into your house! However, it does make it unique and original to us as we were the ones who built it.

We did purchase the upgrade for the Wi-Fi version and initially, we did have a lot of problems with their “Magic Home” application that you get on Google Play to control these lights. A lot of the problems stem from us wanting to add our RGB strips to the existing network and the fact that for that to happen my mobile device had to jump between two SSIDs. Halfway through the jump, it assumes the mobile network is the correct SSID and instantly fails the connection. We had to place the “Magic Home” application into airplane mode but with Wi-Fi on so that it could make the transition between the two SSID’s and thus connect our lighting to our home network. Kind of annoying but it’s a hell of a lot better than the shitty IR remote control and receivers that came with the whole setup. Is the aluminum extrusion worth it? Given the lighting and the amperage, we’re throwing out. We say “yes!” The aluminum does get warm to the touch after hours and hours of it being on but never exceeds that temperature range.

This is excellent because since we’re not only using the aluminum for the structure we’re also using it to extract heat away from the LEDs. This will give us a far longer life then those which simply string them up in their grocery store. Anyhow this little project took us less than a day and it took more time to write this up than it did for us to do it! If it inspires you to make your own LED lighting system for setting that special mood awesome. If you think it sucks then great! I know for a fact there’s better interior designers out there which can give you the aesthetic of wanting to put your Peloton training cycle underneath your lights. But this is fine for us.

Until next time that’s what server said.