Another IBM product (which is now Toshibas nightmare), another capacitor fails. Unlike Dell and Samsung which moved away from the Chemi-con capacitors quickly after the lawsuits and disasters of PCs and servers dropping over dead in less than a year. IBM stayed the course and decided to make this capacitor the “Industry Standard” kinda like how industry standard for generating power is using a water wheel. Unlike my previous article I don’t think I have illustrated exactly WHY the capacitors blow apart so easily in these SurePOS units. 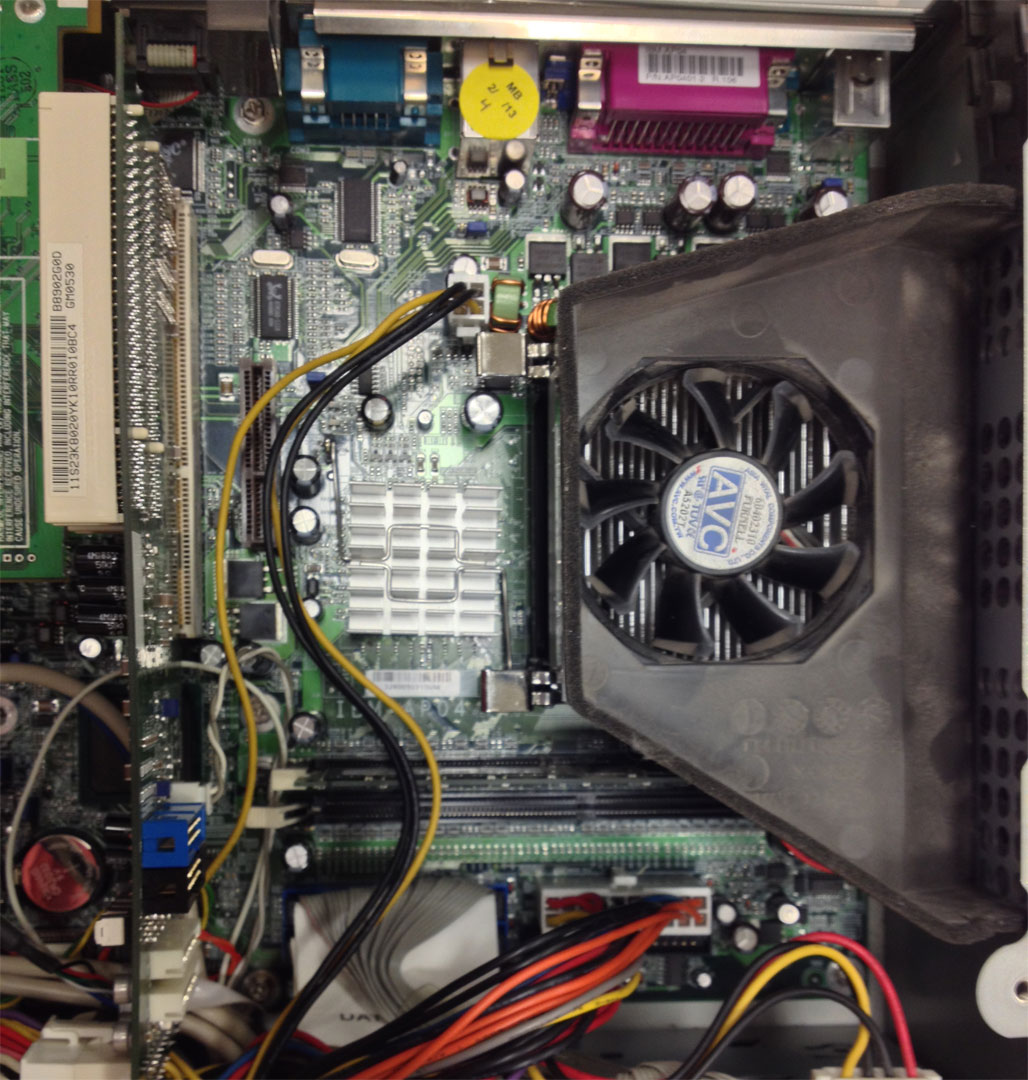 The IBM SurePOS is the client/workhorse of the world of POS and can be found in a lot of your favorite national chain stores. These machines run 24/7 and do not stop and rarely do they ever power down. There is a high probability that there’s at least one register in a store of 10 lanes or more that have swollen capacitors in it because the problem of random shut-downs and crashing only happens when the store loses power. The customer such as the store directors and management blame it on the storm, but in reality, it’s probably because of the cabinet hole they shoved the register in robbing what little ventilation there was for these poor units or all of the papers that they stuff around it. 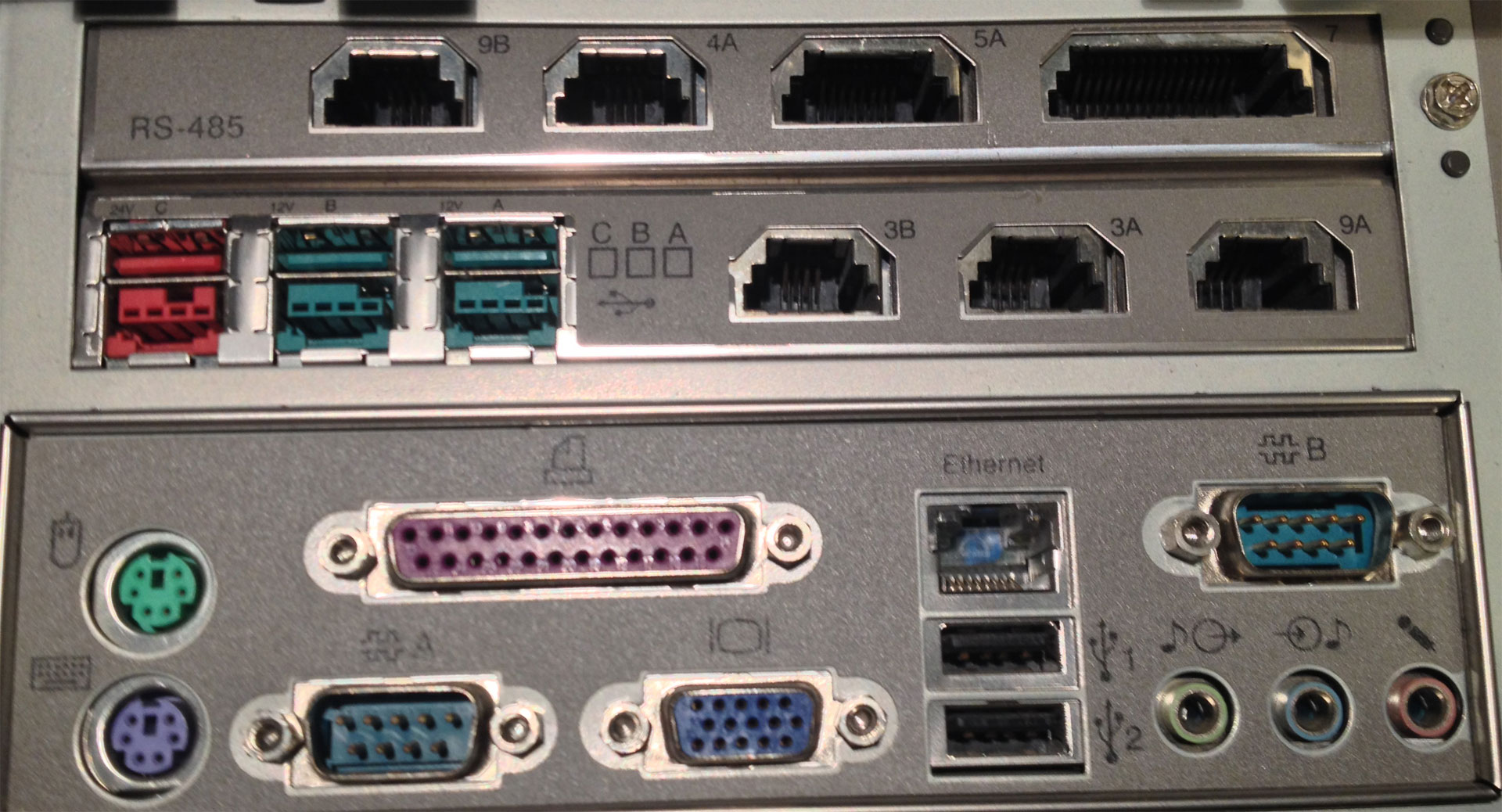 It’s also the best machine to test POS equipment on because not only does it have all of the connections needs to test out your old skool IBM POS cabling and equipment like IBM/Toshiba TI-4 printers, and self-powered EFTs. But it also has the newer USB ports attached to it as well giving you the 12-volt ports for testing out newer USB controlled NCR, Magellan, and IBM scanners, and 24 volt USB connectors for testing your newer model TI-8 and 2CR thermal printers. with the correct USB sticks loaded you the IBM SurePOS is your one-stop test-box which is a hell of a lot more then what I can say about NCR. And if you blow them up by accident or due to a printer or scanner feeding power back down the line. it’s okay you can just replace those two modules above the mainboard. For those who want to know part numbers they are:

But when you pull away the fans, cabling, and wiring, you end up with a motherboard that has completely blown apart capacitors due to the lack of ventilation the fan cowl is robbing from them (if you remove the fan cowl all together warm air circulates to the point where it destroys more then just these caps!) . This especially applies to the 6 3300uf and 2 1500uf 6.3volt capacitors which are close to the heat-sink and since the airflow of the heat-sink is vertical it does not get any air blown onto them (It instead goes towards the ram itself which is more important). This problem gets worse if a customer (Or some wise-assed technician) decides they are going to install full pentium 4 2.6mhz 400FSB chips instead of leaving it alone with its default celeron 2.0Ghz .

Serial Numbers protected for the innocent

But you see, you don’t stop with just the capacitors by the processor because that’s simply lazy. The capacitors by the RAM sockets can do strange things when they blow such as not allowing you to use the second ram slot or giving 4 beep memory errors no matter what. And since everything relies on the fact that ventilation from the heat-sink is clean (and often times it is not) you get damage around the bus chips as well. This usually does not happen with the Xseries 205 and 206 servers because there’s plenty of room for everything to breathe unlike how it is in this POS client.

What if my SurePOS unit does not power up even AFTER replacing all of these capacitors.

I’ve only done this a few times and partially because I am not very good with a reflow machine. But chances are, your northbridge chip is either burned out or desoldered it’s own BGA pads due to the extreme heat build-up inside of the register. I’m not going to cover how to repair that because unlike the capacitor repair where this can all be done with a $30 soldering iron and about $15 worth of capacitors. A reflow station is in the thousands and the chip itself is about $25. Which hey! If you’re repairing hundreds of these boards then perhaps the reflow solution works for you. For the rest of us , if it does not work you can always get a replacement board off of Ebay anywhere from $50-$100

I find how disheartening it is to watch IBM as a company sell off all of its assets to other companies, first selling their personal and business PC line off ot Lenovo, which I am fully aware that it was all being made in china anyway what’s the point of keeping the IBM logo right? Part of it is pride and almost generations of salesmanship that they’ve generated over the years. But in reality when you look at IBM in such away. They have never really generated anything on their own now, have they? Most of their printers are Lexmark (And if you date back far enough Printronix) most of their PC standards was intentionally given away so that third party companies can take over and incorporate their standards.

Now they’ve given away the SurePOS industry over to Toshiba which if you follow Toshiba’s line of PCs and laptops they were always nightmares for a technician to work on. So I guess it’s fitting that the disaster known as the POS repair industry goes off to a group of people which firebombed their PC market. But who knows! With POS solutions like Square kicking in the only thing Toshiba might have done is simply try to hold onto old industry dogs of retail that can’t afford the tens of millions of dollars to upgrade their ERP system to the something better. The only thing IBM does now is consulting of their dinosaur AS/400 line database migration and perhaps the occasional server is ‘assembled’ in America, but that’s about it really. It’s just sad that’s all.