Yes, there’s Bing. Just saved you from going to a large tech site and thumbing through 5-10 pages of ad-sponsor hell while they divide up the list to 10 pages in a desperate attempt to improve clicks. You’re welcome.

Seriously; We can’t tell you how many times we’ve seen the article “Top 10 Search Engines” from countless bloggers only to find out that if you are in an English-speaking country. You pretty much have different flavors of Google dominating %80 of the market (Duckduckgo, Presearch, SearX, AskJeeves, and the list goes on where they mindlessly accept either a Google or Microsoft aggregate instead of doing the hard work themselves.) Beyond that, there is  Microsoft Bing with their %8 and finally, Yahoo is still hanging in there with their %2 of total internet searches. Where do these percentiles come from? Like other bloggers, we pulled those percentiles out of thin air!

But it sure as hell feels that way!

Now, We’re going to state that this article may be small at first. Because we want you to leave a comment below and tell us about different search engines as well. We’re straight-up curious! Now, we’re not going to include any site that simply aggregates off of the big three(Google, Yahoo, Bing.) We are also aware of other search engines like (Yandex, and Baidu) which have their own monopolistic tendency over their own countries and will not be listing them either as well as happily censoring their engines for government compliance. Nor will we be including archive/wiki sites as archival sites take away traffic from independent sites. Now, unlike my Video search engine article, we can’t easily do a side-by-side comparison because each site is unique. This is actually good! Because it means that none of them are really drinking the same Google/Microsoft Kool-Aid as pointed out in that article.

This will take you to the home page of what appears like a hyper developer site until you go to the search. Suddenly it opens up stating that it’s an independent DIY-based search engine that focuses on non-commercial content. We discovered this on the forum where a user stated that it favored text-heavy sites while punishing modern web design.

We were moderately surprised to see our domain right there. Indicating that they are forgiving when it comes to JavaScript and modern design (or perhaps we were text heavy enough.) We also really dig the icons on the lower portion of each result indicating what technologies the site uses and any warnings. As for ours, it shows there are scripts running which is absolutely true. As a WordPress blog, we can’t turn off JQuery.js. It does terrible things when you remove it.;)

We especially dig the info of the domain showing what their spider has done. Really fucking cool! 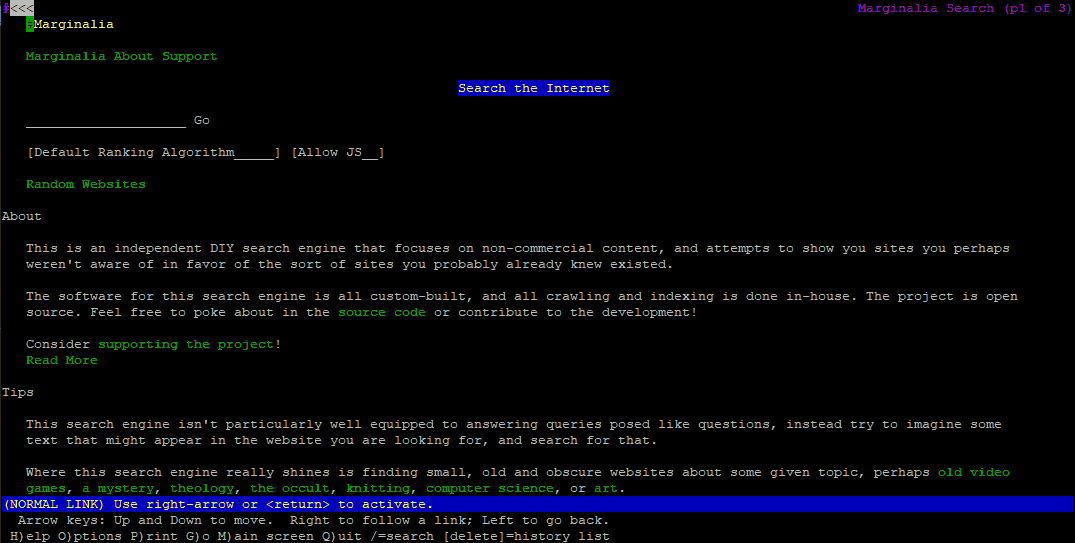 May we also comment on how absolutely sexy this website looks in LYNX?!? Now, for those younger readers checking out this article. Lynx was a way for people on shell accounts (Text only terminals ) to look up HTML websites. To use a PC or MAC with color graphics like we take for granted today was often reserved for ‘premium’ workstations that libraries and universities in the 90s. Time was limited per student on those systems. But there was no limit on the text terminals as the bandwidth was so inherently low it did not affect the Frame Relays and ISDN modem 128Kbs (or if you were a REAL high roller T1 @ 1Mbs up and down) bandwidth these institutions had.

Finally, you should visit his support page and donate to him if you find his site useful. Give the developer a few bucks. They sure as hell deserve it!

Wiby has a different philosophy of being the search engine for vintage computers to use. And by default, this site takes you to websites that were coded with some of the simplest HTML out there.

Understandably, you will not find our site here. We have FAR too much JavaScipt combined with an SSL that does not easily let machines from the 1990s browse around my site.

The randomized feature is like being taken on a roller coaster into the 1990s of websites. Where it’s not just focused on small web designers but in particular the older way that machines from the 1980s and 1990s can understand. Which could very well be notepad.exe and a lot of time with HTML.

Although we’re not a big fan of their interface we can tell Gigablast at least does their own work to crawl the web instead of just sucking up to a big tech firm. 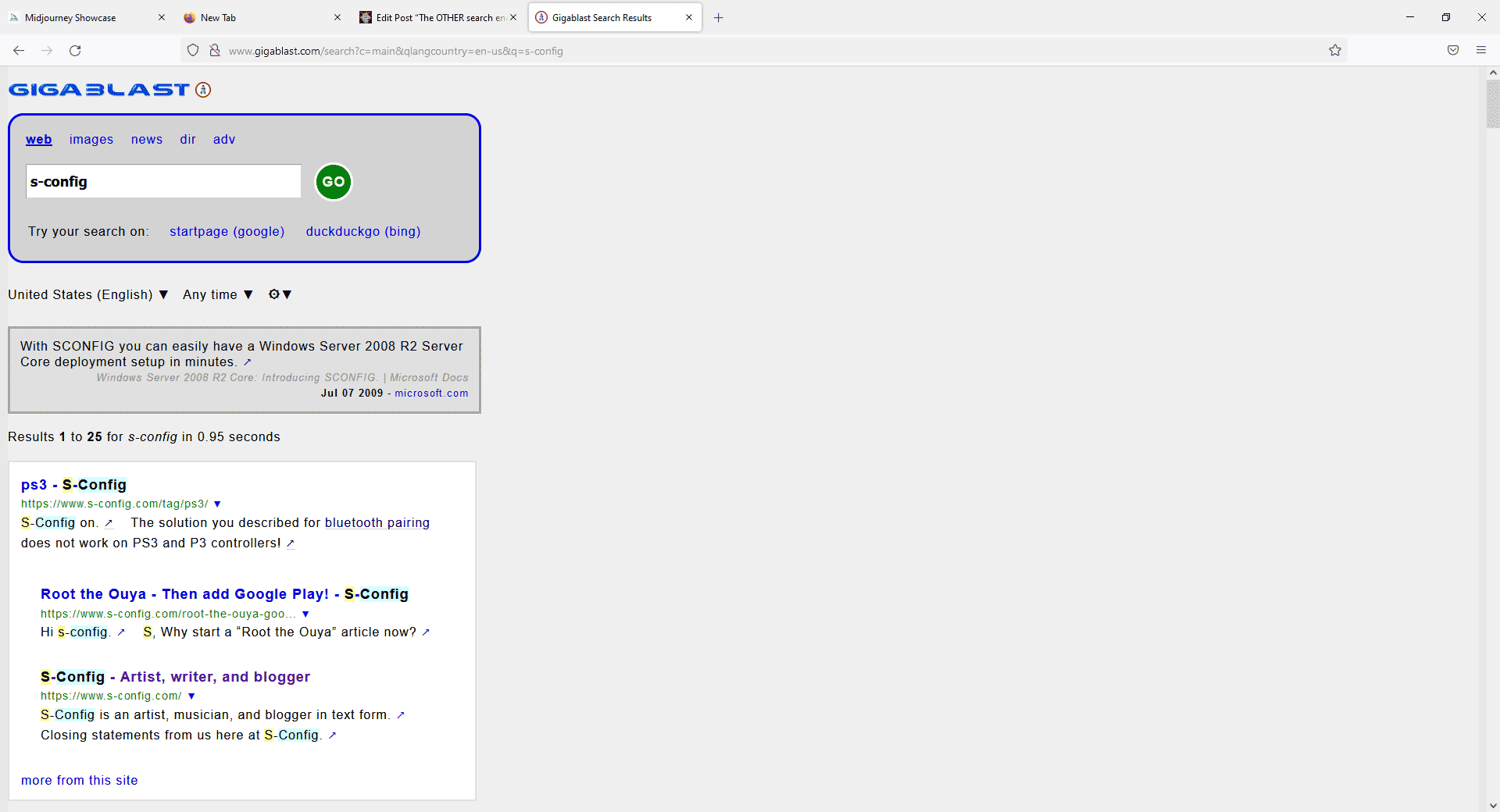 The reason why we’re not a big fan is it feels like GigaBlast was designed more for phones/tablets. Now, we understand GigaBlast wants to keep its site minimalist and compatible. But a little CSS wouldn’t hurt in this situation. Getting some AskJeeves vibes on this interface.

Also, bizarre that their spider latches onto a ‘tag’ as the headliner of the site instead of using my sitemap. But at least we’re out there!

Akin to the browser, Brave claims to be privacy-oriented and able to be completely independent of other search engines. That Unlike the others mentioned at the beginning of his article, if the three big tech companies were to die. Brave would be totally fine. At least according to their FAQ. 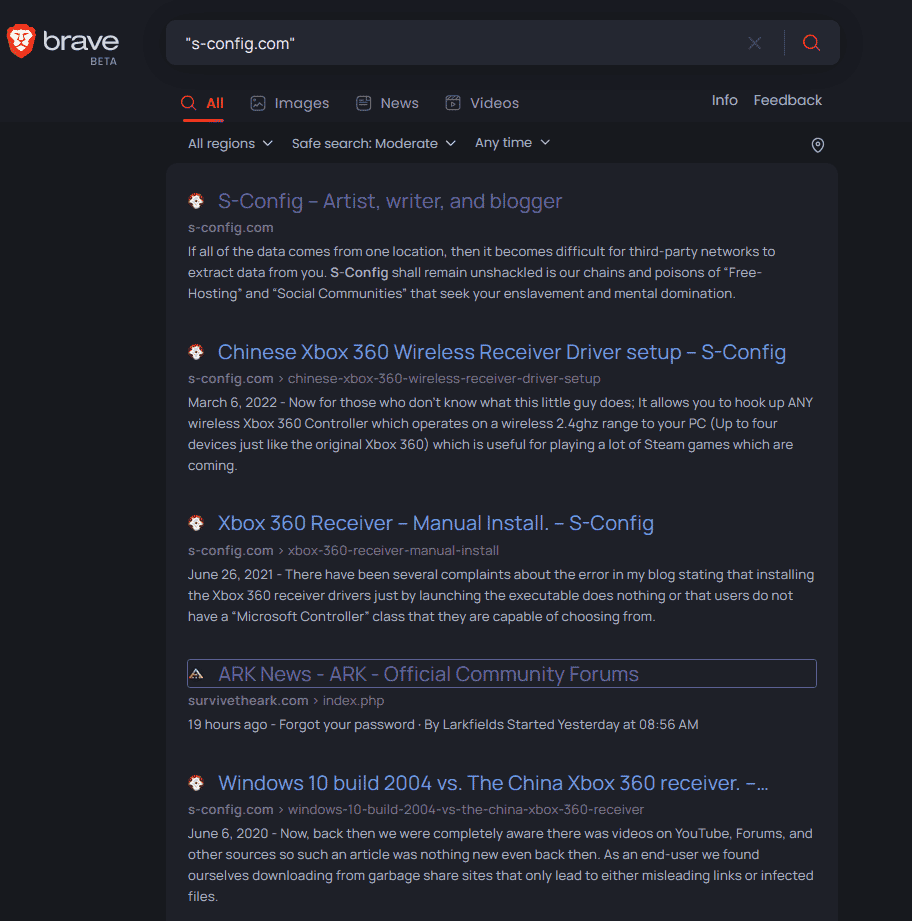 We took a look at Brave back when we did the grand Google Video Monopoly and like a lot of the bigger search engines asking a question as to how their video search results worked led to silence for the most part. However, it does seem like they’re quietly improving things as quotations didn’t work a few months back allowing a person to specify exact works in a search for something like we did with our domain.

This is by far bigger than the previous three search engines out there. However, we’re reluctant about Brave as it claims to be independent it’s incredibly hard to verify this as the company often keeps quiet on even the things they fix let alone the things people are having a problem with. However, if you are looking for a bigger more broad range search engine that isn’t Google. Brave would probably be the best go-to search engine on this list.

Alexandria is a fairly new search engine on the block that is slowly building in popularity because of how simple the interface is. 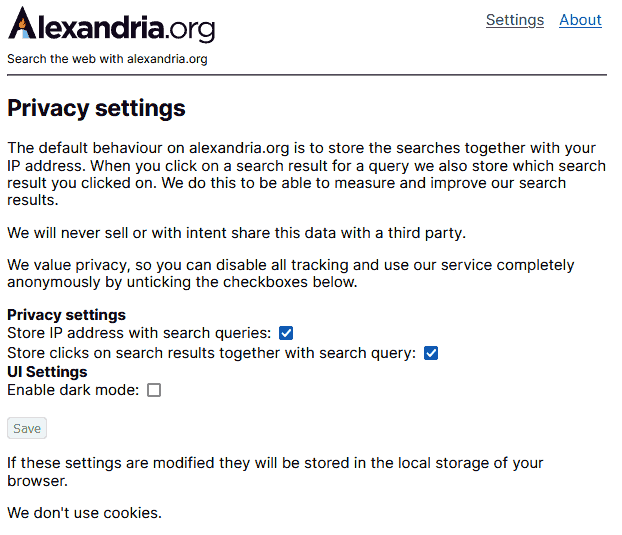 Now the first thing you probably want to do with this site is going into settings and uncheck all of those privacy-related boxes. Does it suck that those boxes are checked by default? True. But at least they give you an option to turn them off. Which is more than what Google will do for you. 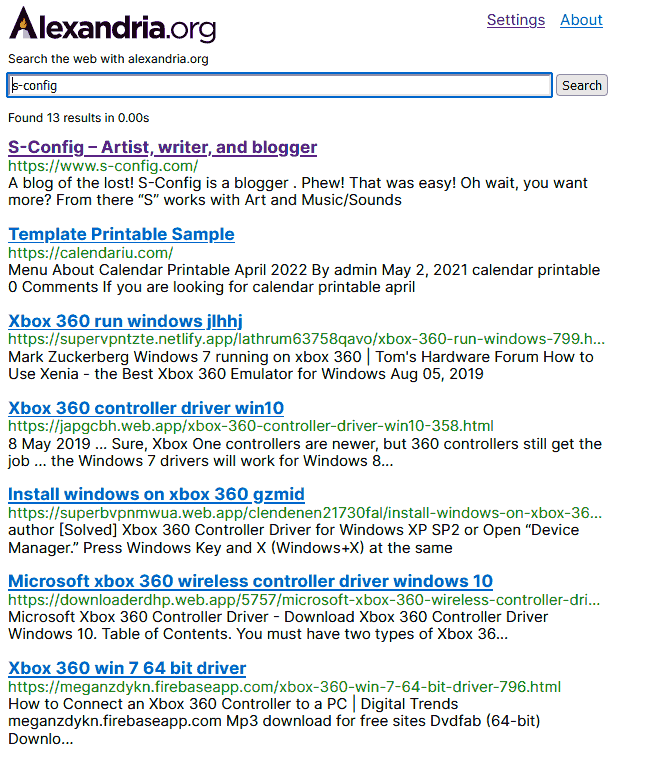 As for its overall usage. Well! we type in our name and like magic, our website shows up. Beautiful. There’s only a page of links and to be honest this may be for the best.

Overall, we consider this one a good, but not a big search engine.

We’re somewhat reluctant to include this on the list because this company known as “Ahref'” had spider going since 2010 for their SEO business. Anyone that has read my articles knows how much we despise SEO scalpers. However, since we mentioned Brave earlier it wouldn’t be fair to not include Yep on this list too. 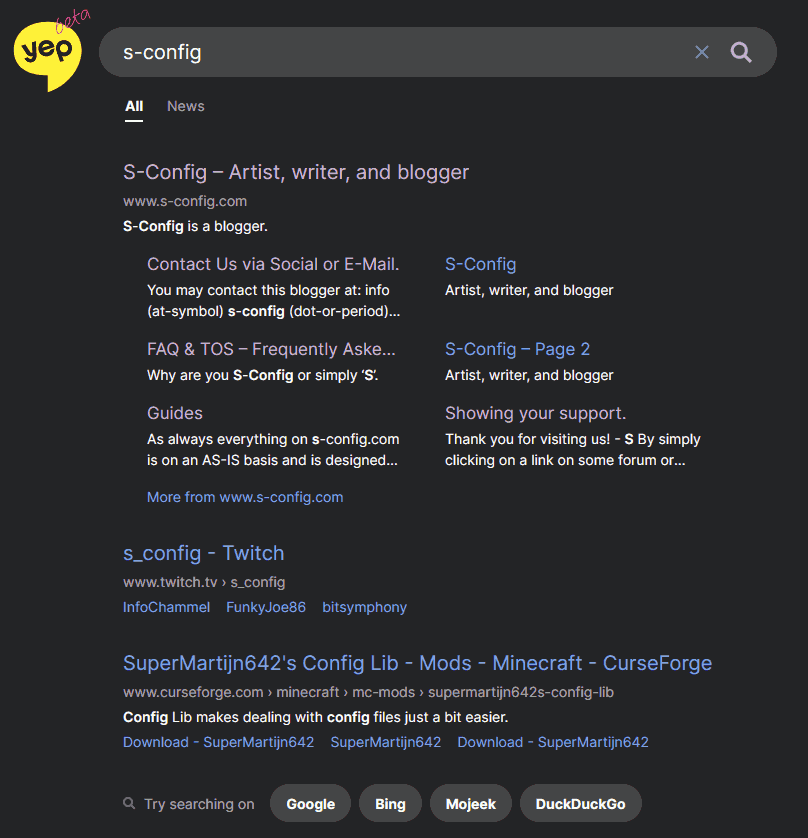 The appeal of the Yep search engine is that it’s supposed to find ‘relative’ search results as well as the absolutes. It found our ancient twitch profile but didn’t really find any of the other profiles that are floating around out there.

Now, you see that widget down below? It’s almost as if Yep isn’t confident in its own search results and instead insists that you the user give up on them and just use Google/Bing/Mojeek/DuckDuckGo(which is a scraper of Google) instead.

To that end. Yup is probably at the absolute bottom of the list. use Yup if you have no other choice and you still want to get away from the big tech engines.

Is a group that uses its InetDex technology to index a lot of domains while still maintaining the privacy of people who use the search engine by encrypting the search, using no cookies, and not even showing the results in the address bar. They also have another domain known as WebSearchEngine which seems to do the identical thing that TuxDex does. 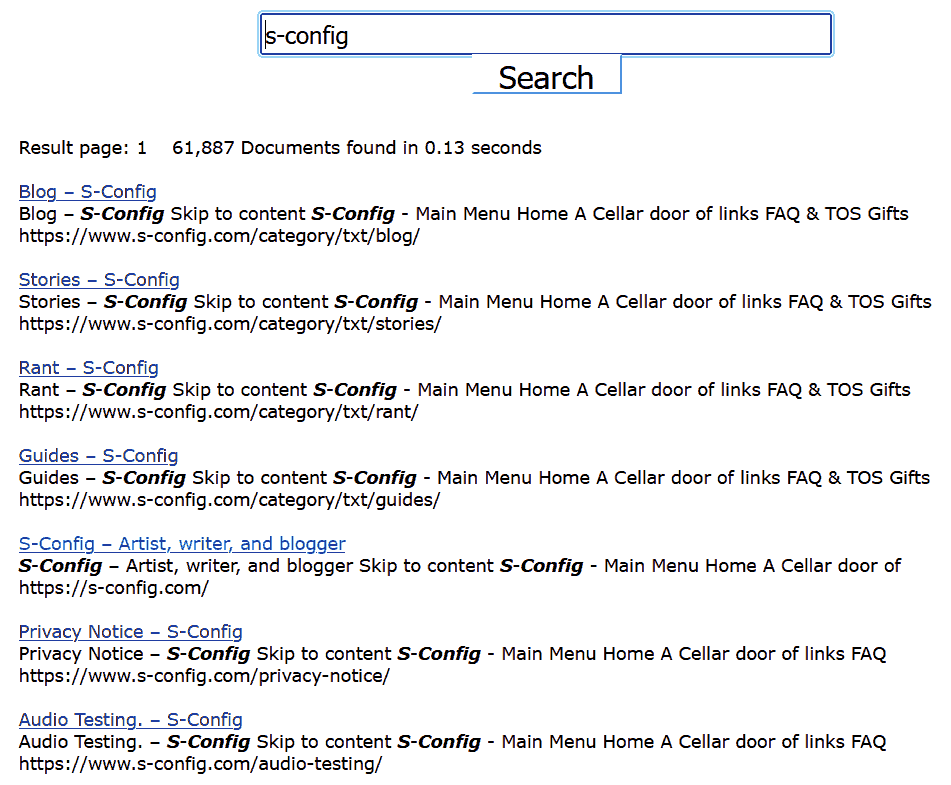 Oof. We’re not going to lie. Even though TuxDex may index millions of sites. What TuxDex exactly indexes needs some work! Because reading the first few lines of a website including its menu structure isn’t necessarily helpful. But hey! At least it’s clean!

Every engine mentioned in this article has its own crawling mechanism. This is incredibly important in the age of information manipulation. Where we have to question if the political alignment or the advertisement interests of Google/Yahoo/Microsoft overshadows its ability to be an impartial search engine. Both companies practice search engine manipulation where they want you to explicitly stay on their site. 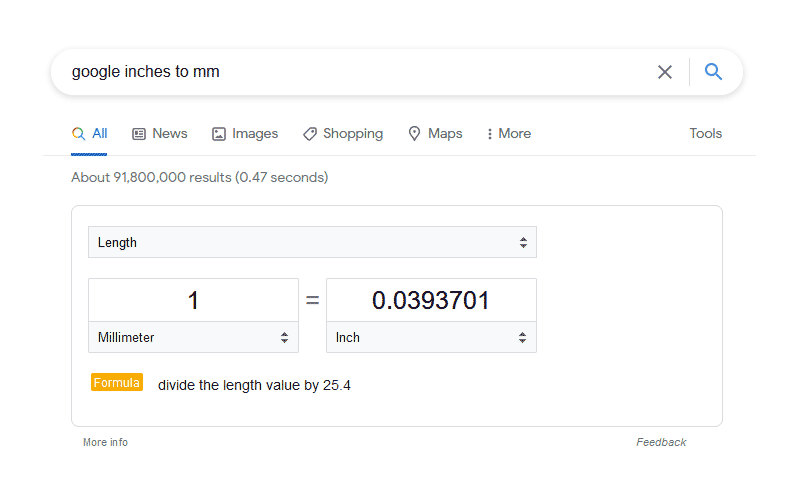 Even if it means stealing data from other sites or implementing widgets made open source from other developers in an effort to keep you the end-user from clicking away. Once again this is where Google becomes its own worst enemy. A search engine that never wants you to find a webpage with said results.

All of this is calculated and manipulated. With the death of DMOZ, the last human editable search engine. Human Edited sites are a practice that is absolutely necessary on onion services because of engine manipulation. There is absolutely no checksum for a large corporation to push the engine in a certain direction. It’s just one algorithm versus another algorithm.  Combine this with the simple fact that google “gives up” after 1,000 entries. We have no clue what Google is even indexing. Or if those 91.8 million results pictured above are even real.

The bottom line, using another engine can be an adventure. And it’s worth it!

2 thoughts on “The OTHER search engines.”