Straight from China is a new 14500 series Li-Ion battery from a company known as SkyWolfEye or as I affectionately put it “The battery with too many nouns.” When you google just SkyWolfEye you end up finding a lot of flashlight reviews and not all of them bad. So a battery with the same name can’t be all that terrible right? Let’s find out!

I got these batteries from a friend which paid for these things on eBay at around $12 bucks shipping and handling for a pack of 10 1200mAh SkyWolfEye batteries. Now, 1200mAh throws some red flags for me right away because the lipo/li-ion 14500 cel batteries typically run around 700-800mAh with very few exceptions like some Sanyo batteries pushing the upper limits of around 860mAh. He noticed how his flashlights were dying after only being on for about a half an hour and wanted me to check these out and see if it was either his flashlight or the batteries themselves.

How the SkyWolfEye batteries were shipped. 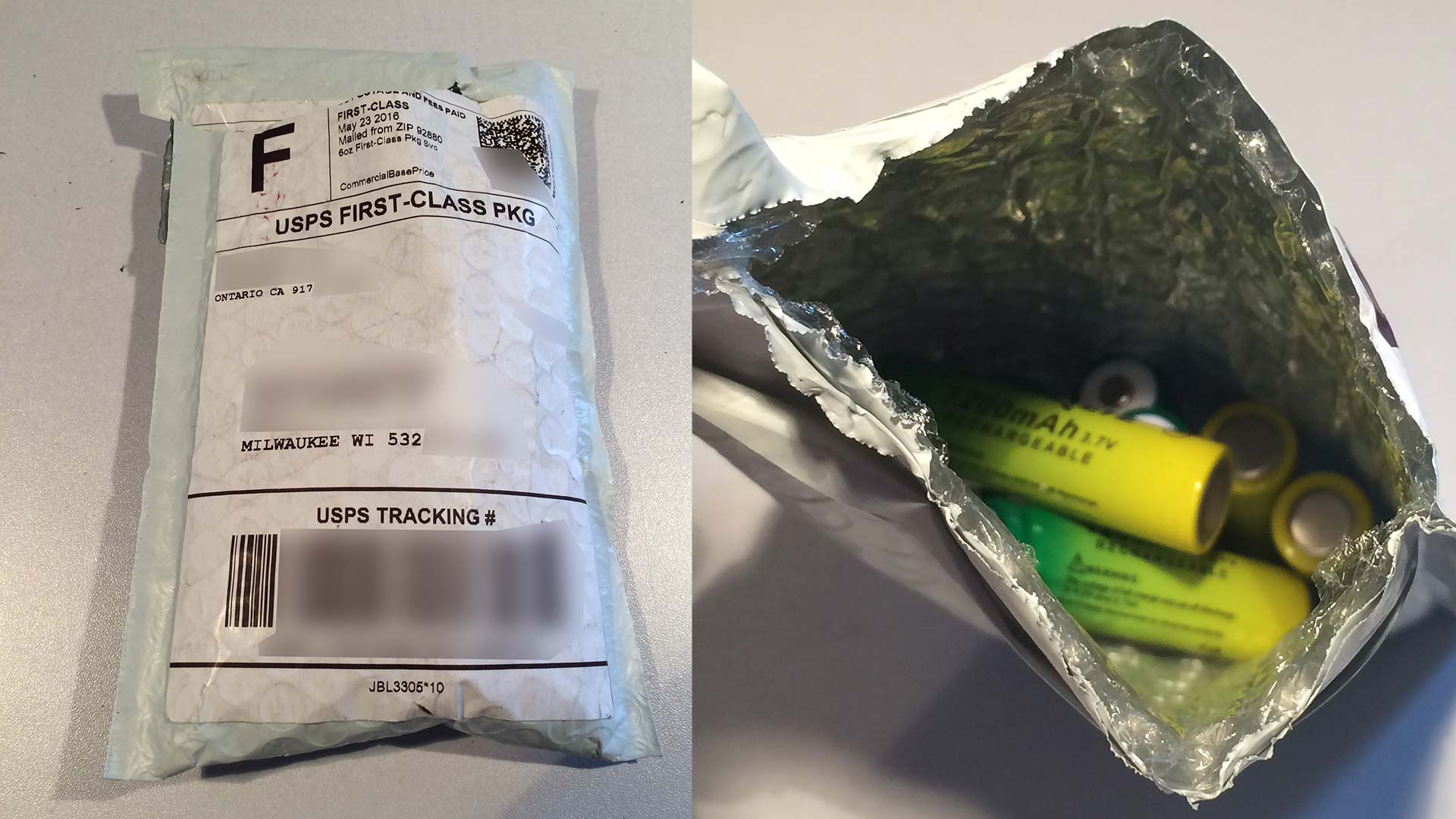 Wow, ladies and gentlemen. We give you the reason why fires happen on shipping vehicles/boats/planes and why a lot of carriers get super-pissed if you don’t mark your boxes containing lithium material. This is how the package was sent from California all the way to Wisconsin via first-class postage because it’s the cheapest way to ship things under 13 ounces or 368 grams. nothing protecting the batteries except for a bubble mailer. and to really add insult to injury, the batteries were loose inside of the bag causing potential shorts and bridges during its travels across the united states.

Is the buyer to blame for this happening? No, this comes down to the seller trying to aggressively mark their product as low as possible and having a reckless abandonment about quality control or even safety.

Alright. So I pulled all of the batteries out, hooked them to my multi-meter and they are all reading around 3.9vdc. Now to most people who do not have any way of testing the total amperage of a battery they could consider this a good product and happily move along with their lives.

We don’t believe in moving on with a simple multi-meter test. So let’s break out some hardware.

My test station is an IMAX B6v2 station that we have some jumper cables attached to wire and neodymium magnets to hold the wires onto the SkyWolfEye battery terminals as we are charging. I have tried this simulation in both Li-Ion mode and the more safer Li-Po mode as the only difference when charging is Li-Po voltage cut-off is around 3.0vdc

The first thing we want to do to get a good clean charge is dropped the lithium cels to their minimum voltage as when you receive lithium batteries they have what is known as a ‘storage charge’ to them. It’s basically the battery charged at around %70 to keep the chemicals inside of the cell stable during long-term storage such as packaging, and shipping. I also have my Wi-Fi module hooked up to pull results with my android tablet if necessary.

With a 1amp discharge, the battery drained in under 20 minutes only storing 234mAh with the li-ion battery dropped to 2.9vdc. Huh, okay. So let’s charge it up.

After just 52 minutes with the charge set for li-ion – 1A charge, the batteries finished as an abysmal 426mAh. This is some classic low-grade Chinese batteries. Now I didn’t stop with just one cell, I went through all 10 li-ion cells, and they all had varying degrees of failure of the worst being at only 230mAh and the best one shown above at 400-450mAh. Discharging held roughly the same values as charging.

Upon showing my friend the results he contacted the buyer and this is what they told him:

hi friend,sorry to hear that.the supplier told us that it will get 1200mah after full charger. could you full charge the battery to check it again?Dont worry,we will help you.Thanks

Okay, so what’s going on is their ‘supplier’ based out of China is telling the seller based out of California that their shit is good. The seller makes no attempt to test their own product out just simply takes the money and dangerously ships these batteries across the country because suddenly shipping things within the states get expensive. They attempt to set up shops in America and other countries around the world to win the buyer’s trust.

My friend got his money back and sent the batteries back. Probably to be re-sold on eBay to someone who does not have an advanced lithium charger.

Most of these sellers use diversion tactics in order to keep their money.

Update: 07/10/16 – Our buyer friend reported to us that the seller attempted to send the buyers eBay item to the wrong address. Then,  contest it by saying that the buyer was the one sending it to the wrong address instead of the seller updating their address in the eBay system. It is also noted that the seller attempted to hide the auction to avoid getting any negative reviews or further contact information directly from the eBay Buyer panel. I showed my friend how to get to the open ticket for this item to pursue him as well as how to open that auction up.

A negative feedback was left upon the seller’s account due to their evasive tactics and blaming the buyer for the faults of their own shady business model. They knew they were selling garbage they are simply not expecting anyone to call them out on their garbage.

Buying within your country versus out of country.

The only nice thing about the fact that these vendors are moving to the country with the buyers is that you buy from a seller within the said country is generally there is a money-back guarantee for new products and if they fail to comply you can file fraud against them. Unlike doing business overseas like say, India, where if the seller wanted he could just take your money, send you a package filled with flour and tell you that you’re screwed as you have jurisdiction over there. 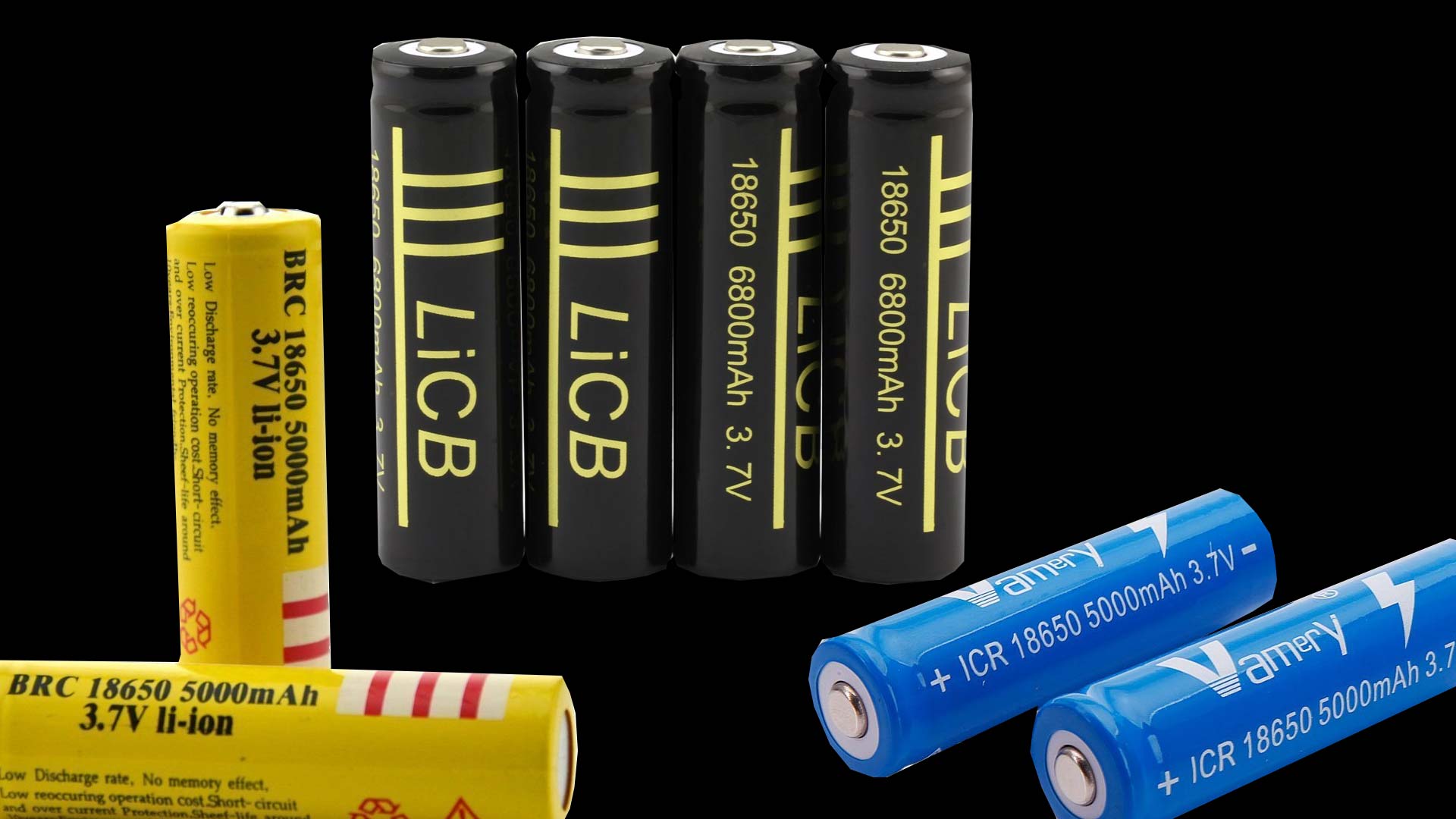 mAh is meaningless in the Chinese market. Minus well say 500,000mAh!

Lithium-Ion batteries have a typical mAh rating depending on their size classification. For example, the 16850 size of lithium battery has a typical charge of around 2100mAh so while it’s possible to see up to 2500mAh if the lithium cells are Japanese made that would probably be limited. There’s even guides on Ebay showing how many fraudulent batteries there are floating around out there. and the pictures that I have for 16850 batteries? those are all pulled from Amazon and all of them are fakes and frauds that do not have anywhere near the total output the claim to have. Without certification and control, you lead to chaos which is what’s going on in the Chinese market.

You’re always going to see some variance in your charger as the chemicals inside of the batteries are changing on each charge. however. variance between its rating and reality shouldn’t exceed more than %20 otherwise it’s used/bad.

The same rules apply to 14500 batteries. Typical mAh is around 700-800 mAh although there is an occasional few that can exceed that and go up to 850mAh. For top-quality batteries you will be paying a top quality price for them.

Then chances are the batteries are fraudulent crap.

The batteries that I would recommend within the 14500 model are true Sanyo UR14500P. If you are looking for a flat-top style battery for your project. Or if you’re looking for something a little more like a AA battery and of course something less pricey then $6 a battery. Then the Trustfire 900mAh batteries should do the trick. Trustfire’s are not true 900mAh. But hooking them up to my charger we got 780-820mAh which is good enough for me! Trustfire also explains how they were able to accomplish getting 900mAh out of their battery by effectively bypassing their under-volt protection and draining it down to 2.0 volts DC which lithium-ion suicide.

Because Trustfire has a good name behind them. Always check the hologram sticker on the side of the batteries, and if possible test the amperage of your battery. China vendors are trying to screw up the trust fire name with bad batteries there too.

Also, be sure and check out my original lithium charging fun post about the rules of these batteries so you don’t have a fire on your hands!

Special notes about China in general.

Look, I know it sounds like I’m coming across like I am disrespecting china. I’ve bought a lot of things both very expensive and very cheap from China.  I believe what is happening is that they have grown exponentially fast and as a result, a lot of lawlessness and ethical issues rise up in any form of commerce. I don’t think that SkyWolfEye and other production facilities that use lithium are hurting their own country by being dishonest with the value and quality of the batteries. This is pandering to the lowest common denominator which is the buyers that think they’re getting a great deal until it’s actually put to the test and fails miserably. Most of these companies are in it for the quick buck and disappear without a trace.

I’m not one for crazy government control, but a little quality control within the market will go a long way. And perhaps that level of authorization needs to happen even if it means paying a little more per battery. At least the laws of the net will always remain. which follows:

You are crap until proven otherwise.

Got a battery that you have had success with? leave in the comments below.