Interesting how time flies within a metaverse engine.

For those who have visited my metaverse section even, we would admit this area is a little anemic. But watching Mark Zuckerberg pour BILLIONS into facebook meta only to achieve results that a 2003 engine known as second life was able to accomplish. It kind of speaks volumes as to how much of a catastrophic failure his metaverse engine is. To add insult to injury. “The Zucc” had the balls to say that his metaverse is “The first of its kind.”

The arrogance of this man is just incredible. He has no idea how much barbeque sauce he could’ve put on his shelves with that kind of money!

However, time moves in the metaverse differently than it does in reality. Places come and go, and there’s never a “Mark” left behind. Well, this blog hopes to share some of that history.

Anyhow. read on if you would like a tour of my life within SecondLife. 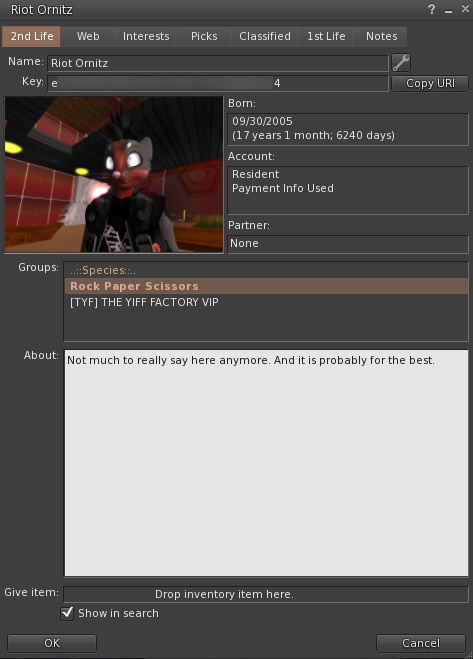 This is my profile. I got it just as SecondLife opened its doors to the public after two years of closed beta testing.  And for about 8 years of our lives were in this place every day. Now, after a while, I grew worried about Linden picking up their ball and going home with a new version of “Second Life2” which is why I decided to pour my energies into OpenSim and other projects like that just to preserve my little slice of the metaverse. We’ve been mostly inactive on this for about 5 years and only recently have picked back up on this just to see how SecondLife is faring with VRchat and all of the variants out there.

SecondLife is dead. No need to go there. 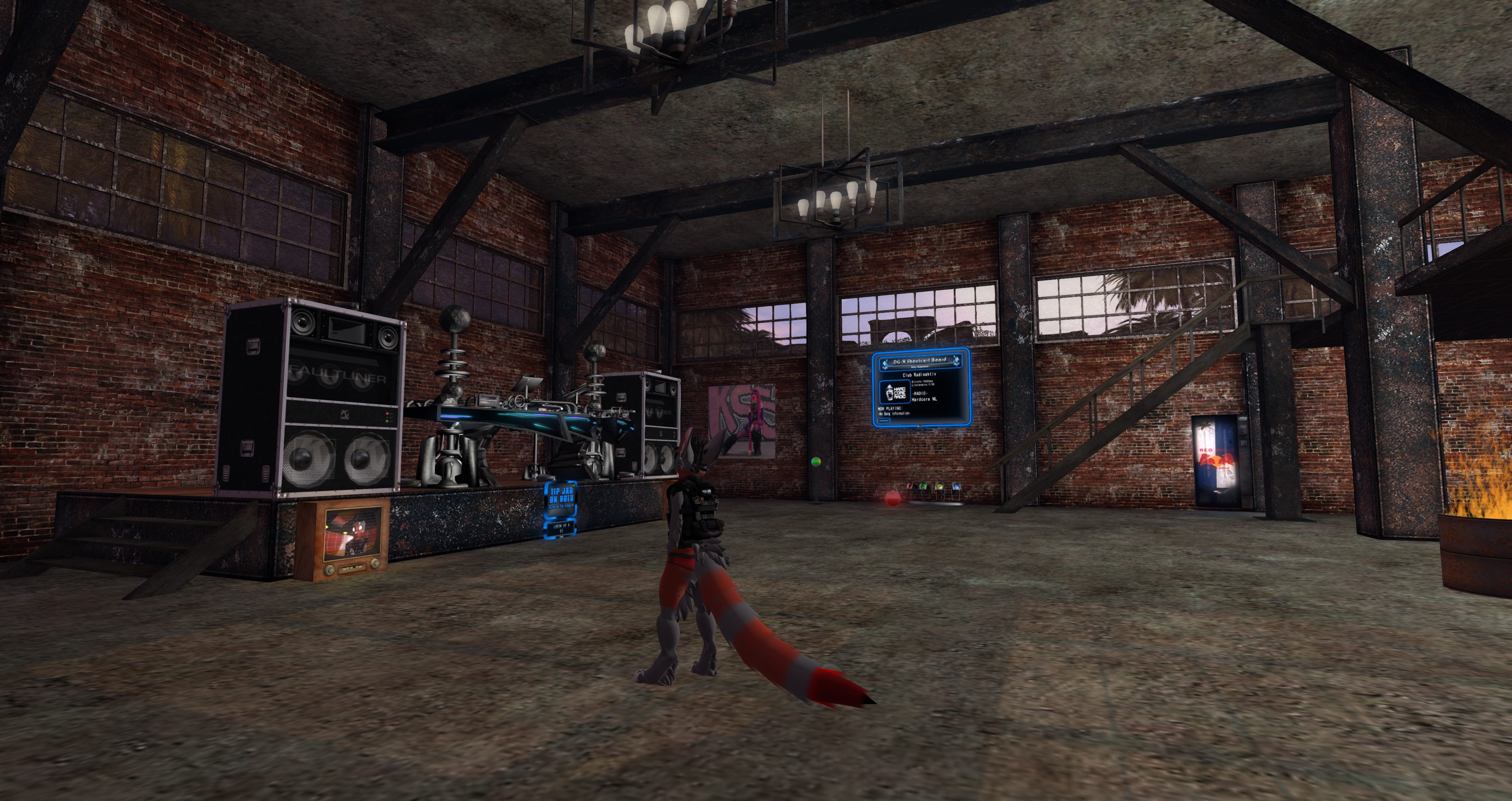 That depends on where you go in Second Life.

This is club Radioaktiv. The picture was taken on 10/31/2022. As you can see; The place is empty. You probably would not believe that 7 hours ago this club had a DJ playing gabber house music with the entire club filled with oiled and very naked human ladies all performing Tecktonik/Hardjump dance moves. The DJ still uses SHOUTcast technology to talk to the audience and to play music. Because this club is only alive when the European operators come by the Cherry Marina sim and announce to others that a DJ is in the house playing their favorite music.

I remembered someone telling me that the overall landscape of second life equaled that of the acreage of Rhode Island USA. So, even if there were 10,000 people logged in the odds of you running into random people on a sim are slim. Now, the regions have been slowly dwindling due to usage. But to say it’s dead is simply not accurate. 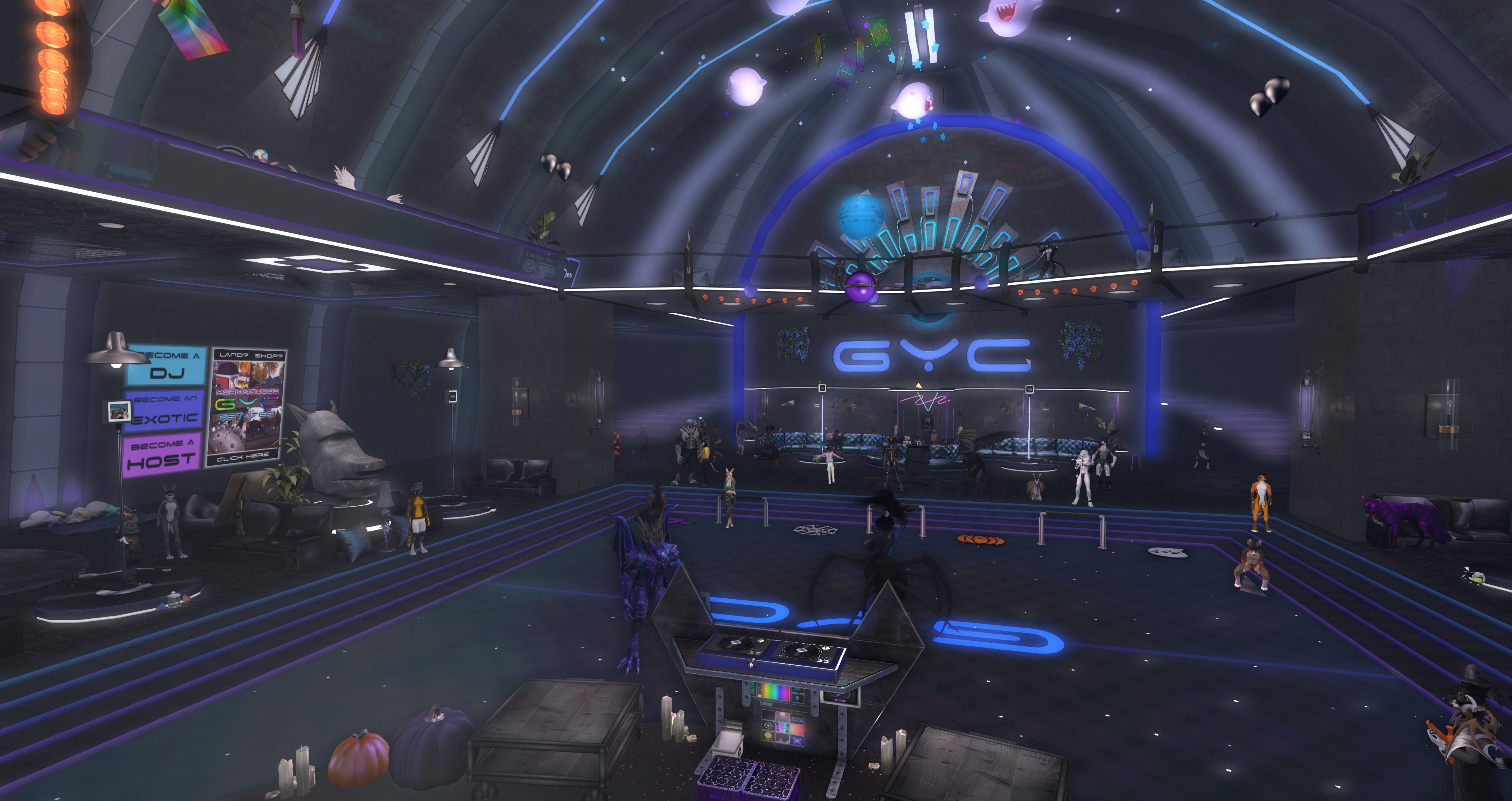 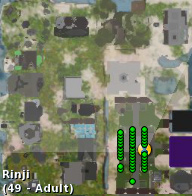 Now, you might be thinking there’s not much going on. Except that this is a skybox of a multi-level club with everyone hanging out. According to server statistics, this SIM has about 49 people going on it. Not bad considering its midnight and the club has no active events or DJs that encourage people to come to the dance floor at this time. There used to be a time in SecondLife when having 49 people in a single server could potentially crash the entire place.

This club has always been brutal. Even on our modern rig, we are lucky to break 30fps at the club itself. There are a lot of factors behind why Secondlife is so inefficient with its GPU and processor settings. Even though newer technologies beyond primitives and sculpts have been added such as the introduction of body mesh technology which is similar to what you would find in VRChat. Second Life has to compensate for compatibility and suffers that with the loss of overall performance.

But GYC to me has always been the ultimate test to see if your computer won’t explode when walking around this place. 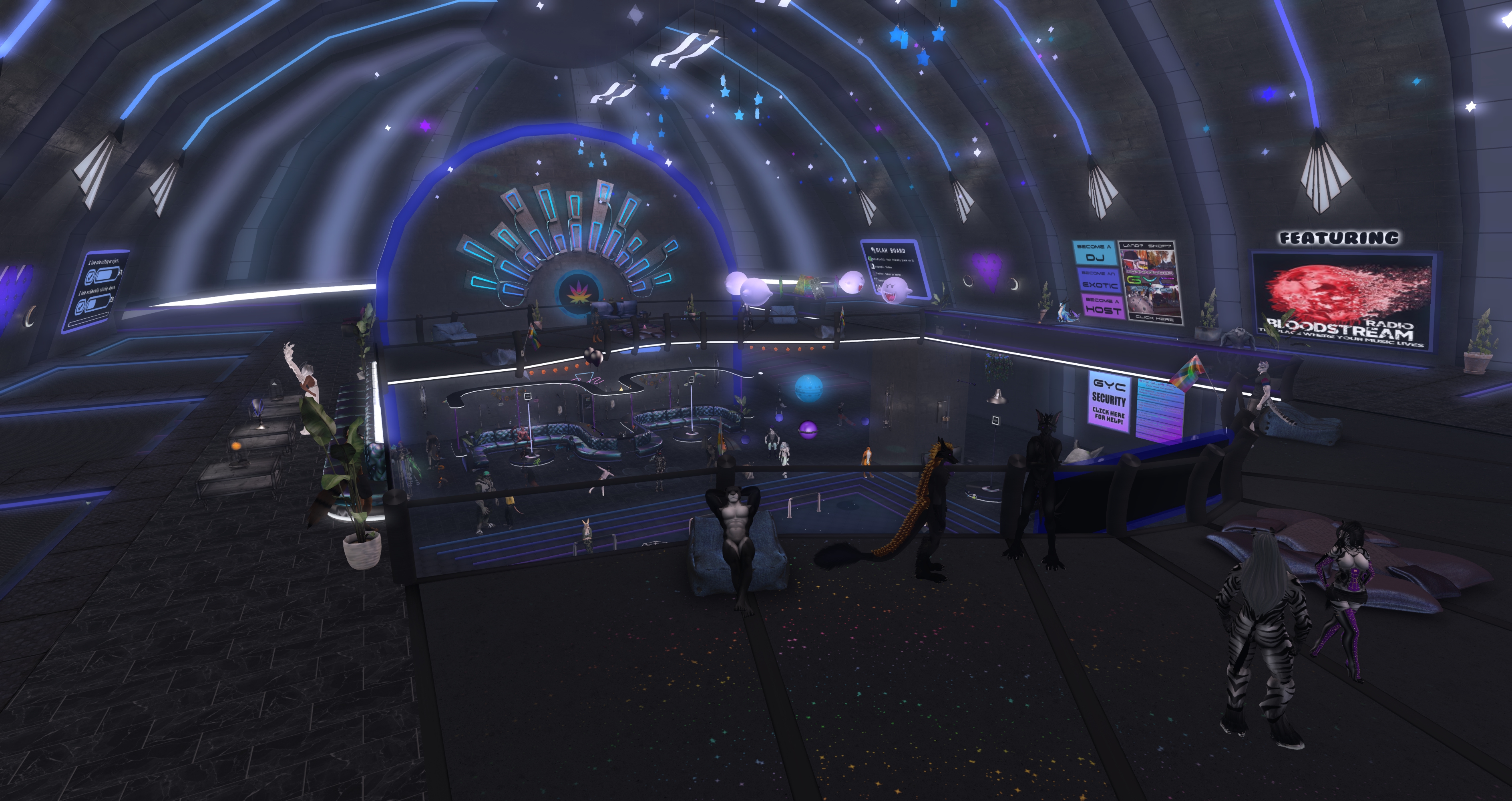 When talking through GYC you won’t hear a lot of conversations going on in public. There are a lot of peeps sliding into your direct messages if they are interested erm, your avatar, and how they look. 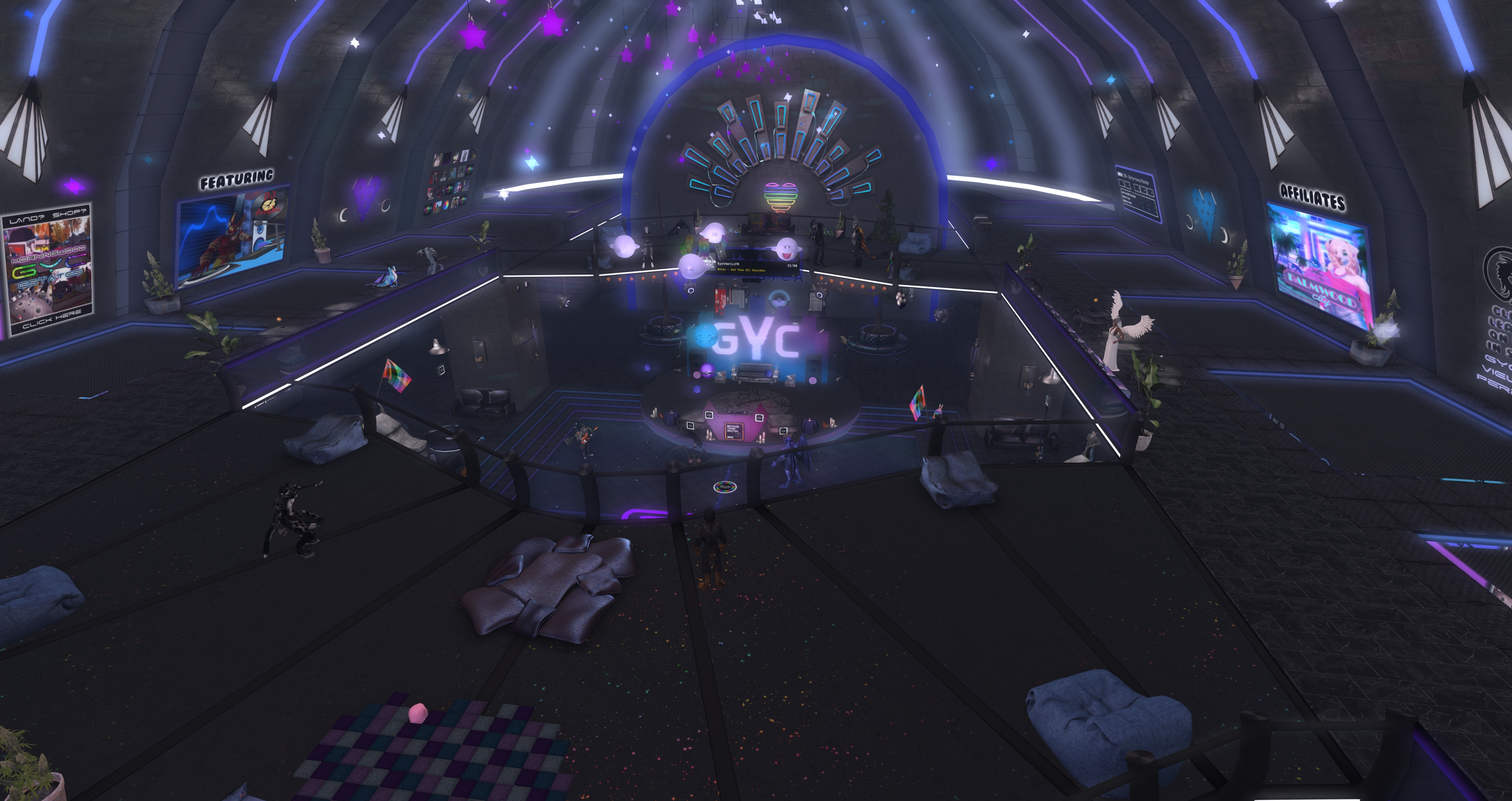 If there is one thing we can say that has changed in the clubs of SecondLife is that the advertisements are a lot more inclusive to the metaverse. There was a time when advertisements to external furry websites as well as even conventions were a thing that you got to see plastered on the boards everywhere in clubs like this. Admittedly this is due to an overall lack of interest from the outside world. Which some may look as bad. However, ever since Linden Labs destroyed gambling in their metaverse combined with a different generation going to newer engines like VRChat. SecondLife in itself has returned to being a community of people wanting to live out who they want. 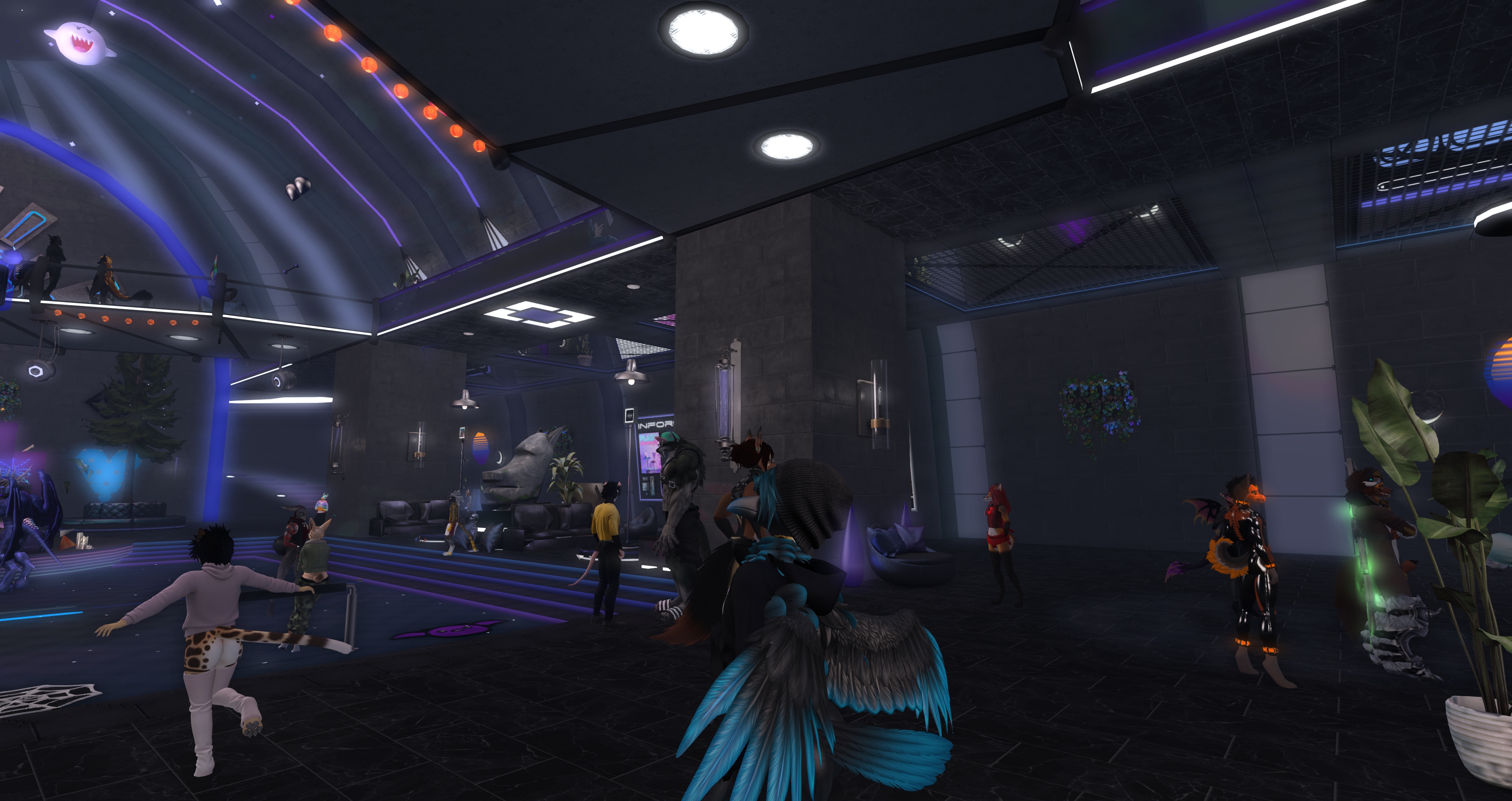 The other reason why SecondLife doesn’t get the publicity it used to is that it’s banned on YouTube and Twitch as a playable game. Why do you ask?

Just some pictures that we saved on our hard drive years ago. The resolution will not be as awesome as what we are capturing today. But going back in time like this brings almost a sense of how long they have been going.

okay, enough of that. let’s move on! 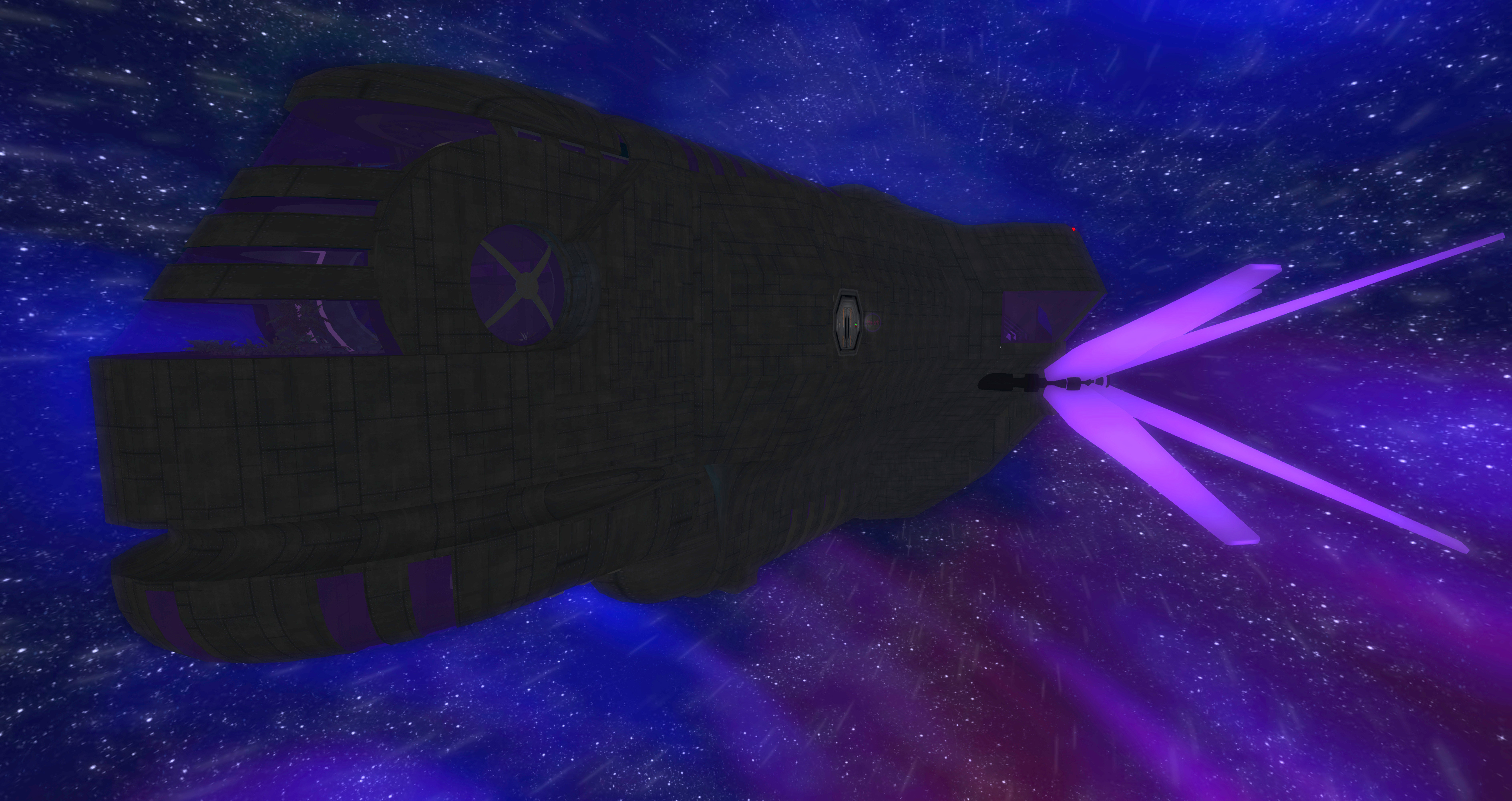 This ominous-looking ship is another 18+ club with a more sci-fi theme going for it. The current recording of this SIM shows that there are approximately 19 active people in the Quarabia SIM. Not as big as GYC and with a reason why. A little history time about the ark is that it too is a very old club dating back to the days of Furnation (a company that hosted artists’ websites, had a webring, a comic line, and even got into the business of metaverse land Barron with having at least 8 sims costing massive money) Furnation was one of the biggest hubs of the furry community until something happened to the owners account and the money (thousands of US dollars) was gone in an instant. Linden law is harsh on people who can’t pay their rent and thus the sims were divided up. The Ark broke away and now exists in the Quarabia sim which we aren’t entirely sure if it used to be an old Furnation sim. 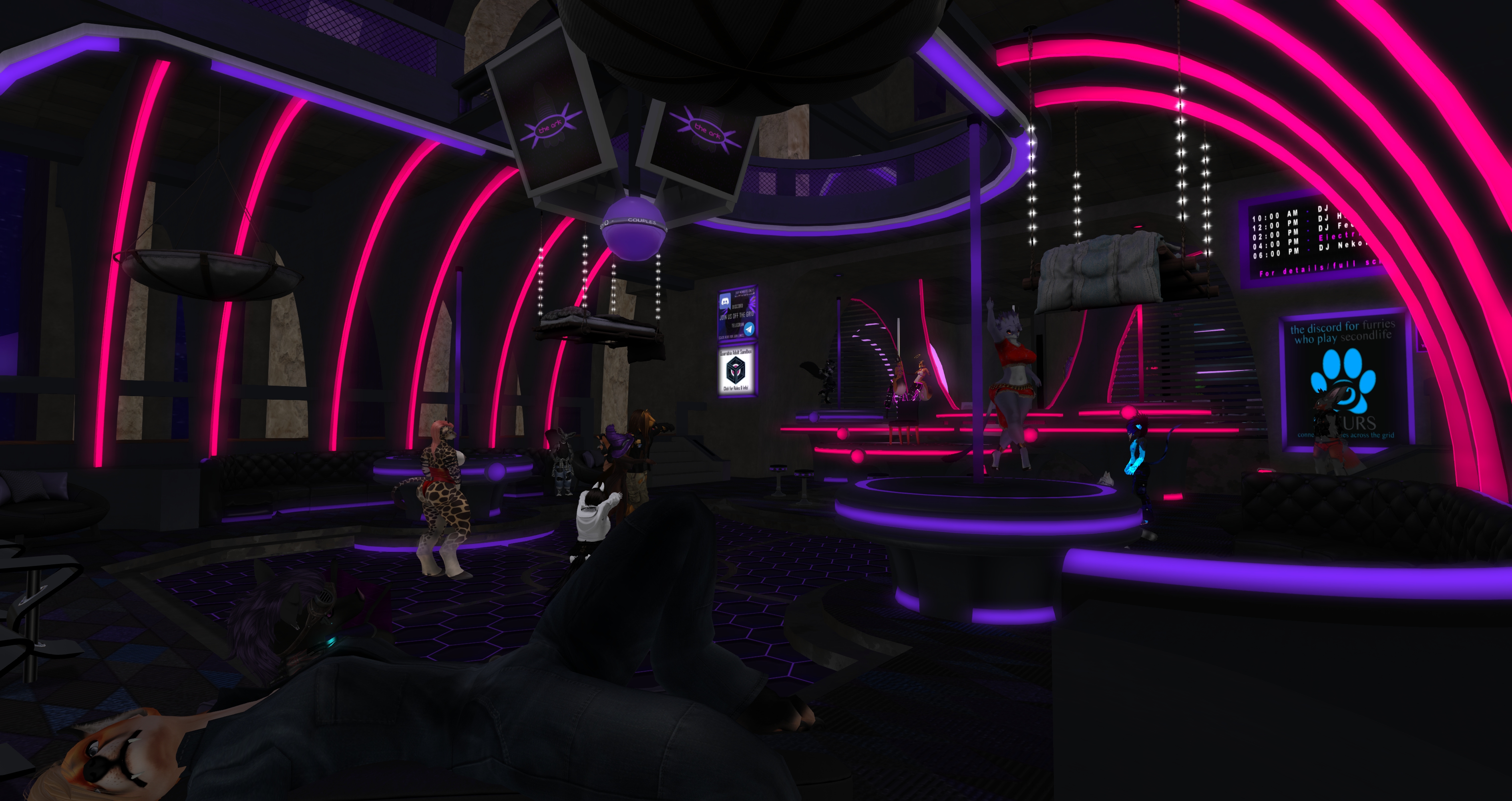 Having a big club like GYC wasn’t necessarily a good idea from a designer’s POV in SecondLife. This is because typed messages have a default distance of about 30 meters (unless you, of course, use the shout commands which carried an additional 60m) GYC is compartmentalized in many rooms with the picture above focused on where most of the people are which is the DJ and dance room. GYC overcame this by having node scripts that carried people’s messages across the club. Which not sure if those scripts got better over the years but it can run until issues of echoing messages depending on where you are in the room. 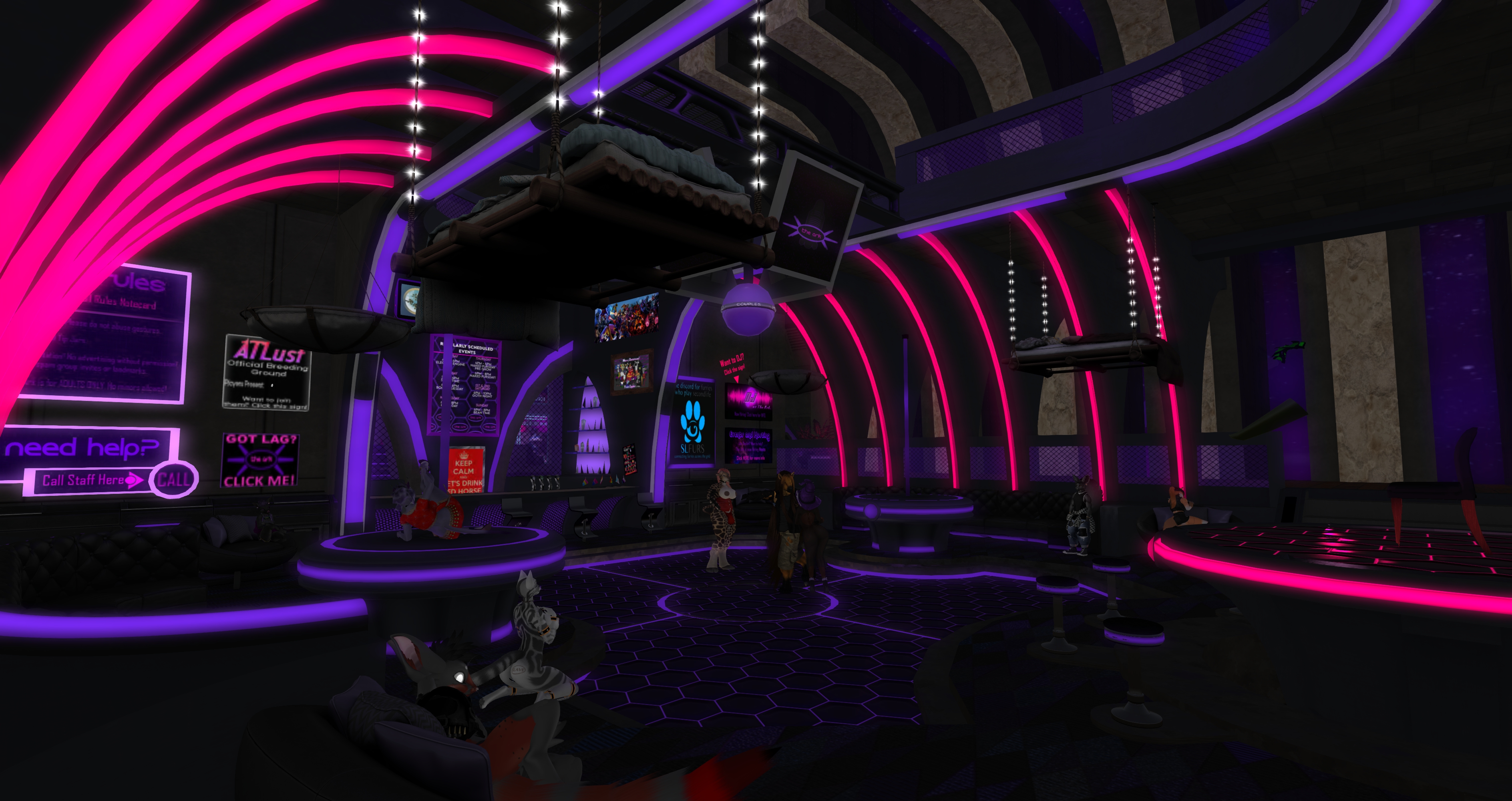 Having partitioned rooms for events does help with running multiple small events. But also leaves a lot of dead spots and overcrowding in larger events. We never spent much time here. But it was always a place in our landmarks folder to check out just to see if anything was happening.

Legacy Photoalbumn of The Ark:

Not much on my hard drive for this one. Most of the pictures were just me looking at rat avatars because fuck. The rats are cool.

You can’t compare facebook to this S! They have had years tuning their metaverse engine. SL was shit back in the day. – Anonymous 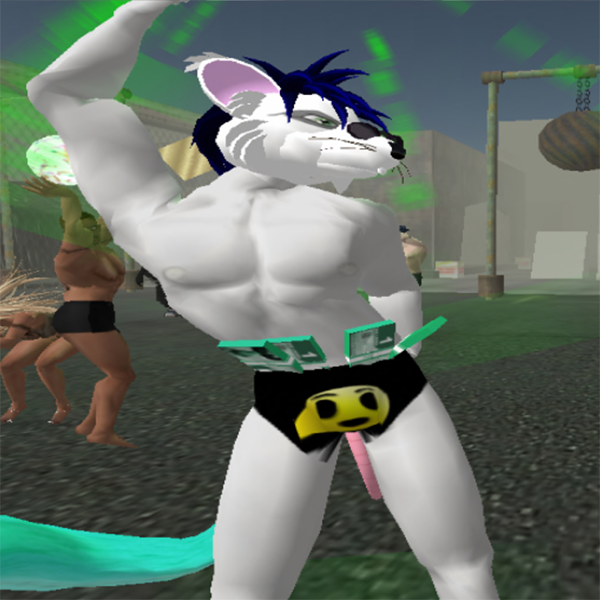 Right, this was our very first avatar in SecondLife. The ExtroVirtual Male White Rat avatar which according to my creation date we got 02/09/2006. Yes, that was me at a sexy dance party wearing Linden dollar bills. The entire avatar was made of prims (squares, circles, torrid shapes, cones, triangles, etc) and back then there was no such thing as Sculpt (color in RGB values converted into a 3-d mesh) or even full mesh support. Back in these days, you build everything from primitive shapes.

It’s the metaverse equivalent of a partial fursuit for fucks sake. BUT! for 800Lindens (or approximately 2 USD back then) It was fine. Especially because lindens were just given to you for logging in each week.

So if you -really- want to compare apples to apples of the start of SecondLife back in 2006 which may be a million in startup money versus Facebook meta in 2020 with billions of dollars. Sorry, fuck you it’s STILL NOT A WORTHY COMPARISON!!!!! 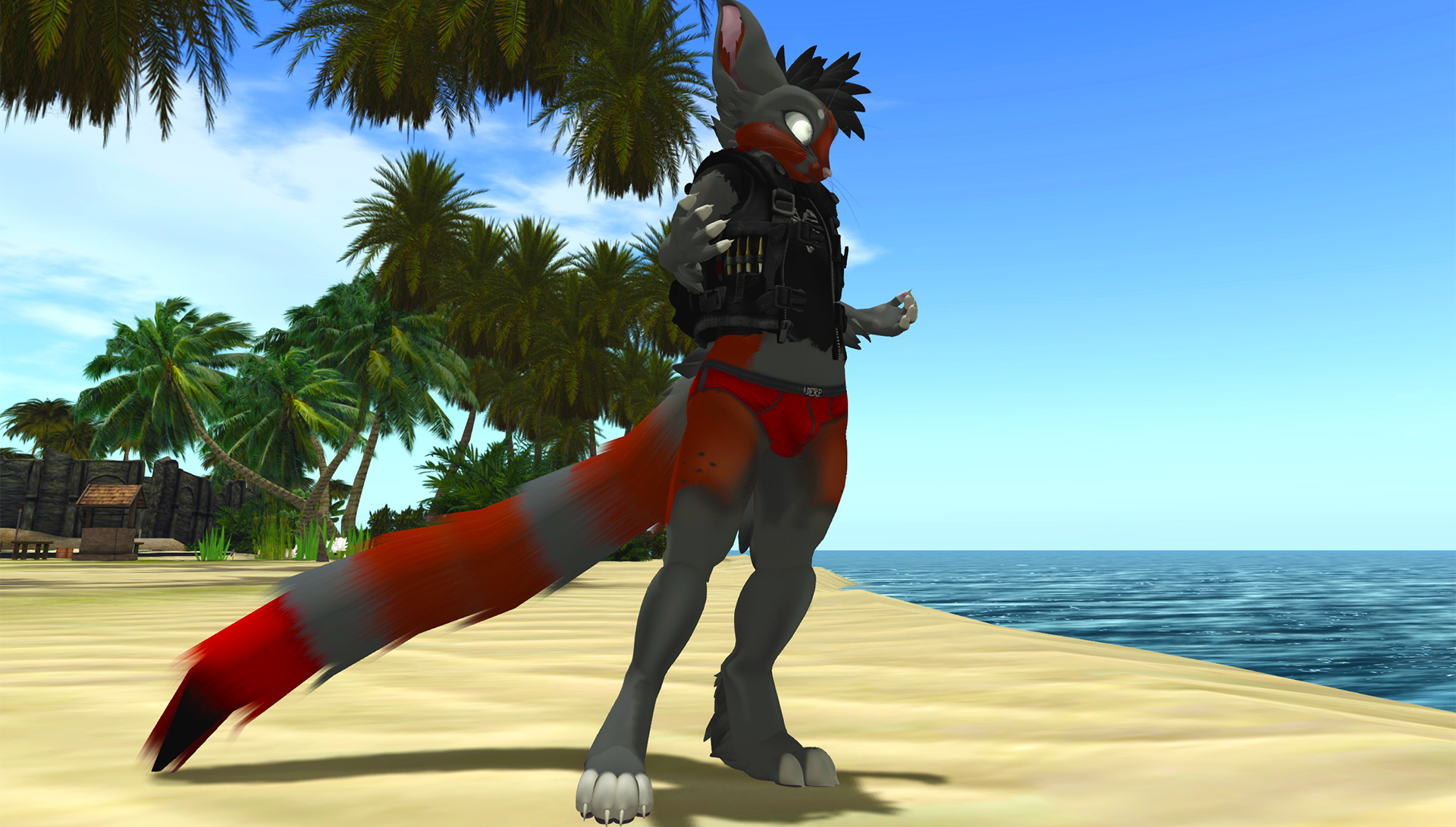 If Facebook cannot compare itself to an engine made in 2003 and slowly revised throughout the years. Where my second-generation 7-year-old Tokushi Possat avatar wearing DERP underwear is still remarkably better than anything I’ve seen in Facebook meta. “The Zucc” has some serious problems beyond where to store barbeque sauce that needs to be worked out. maybe 2 billion and every news agency eating out of your hand will solve it. Maybe if they pivoted to be a business tool instead of an entertainment and pleasure device you could get somewhere (nope, apparently that’s been tried.).

If you like us going down memory lane with SecondLife. Let us know. We got plenty more archived folders to go through.

Until next time. That’s what server said.