We’re going to step it up a level!  This is a supplement to our sleeper PC case article and crossing off one of the items on our list about replacing the final (and largest) fan with a better quality one. And, the lengths that we went through to maintain that sleeper case aesthetic.

Read on we guess?!? I’m sure there’s ONE dude that digs giant PC fans. So here you go! 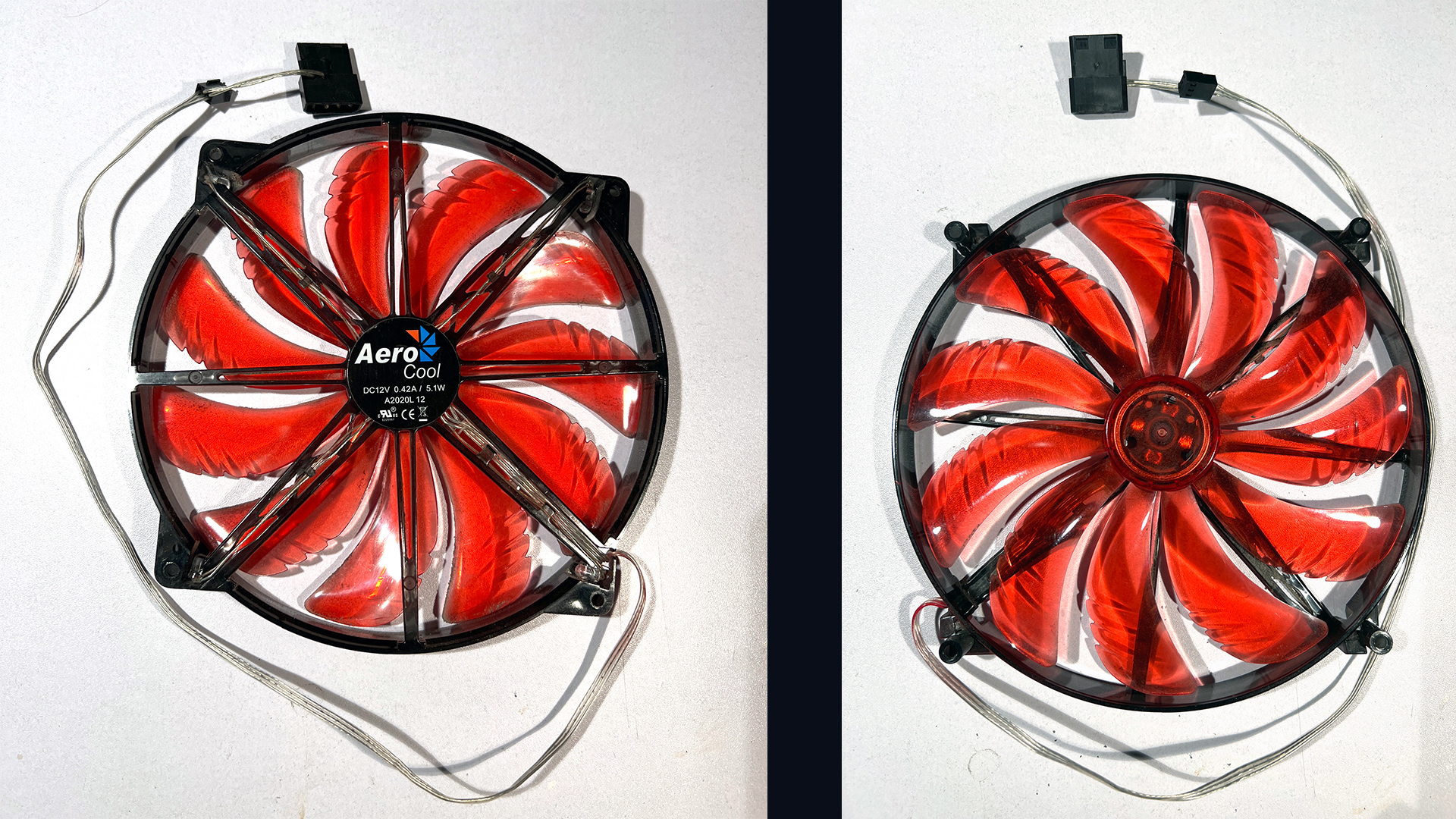 The picture above was the original fan in my first sleeper IBM X3200 case. Which actually came from a Corsair Graphite 380 series portable case that was heavily damaged and was getting tossed. The Aero Cool A2020L fan was still good. and because my IBM case is very wide. fitting this fan into my case with 2 machine screws and a bunch of washers was considered my “good enough” approach to getting cold air into my machine.

Although it really wasn’t a standard PC case fan. It was popular for case manufacturers to attach onto the side of PC cases to bring cold air onto not only the processor but your cards without generating a lot of noise. So, instead of having 3 to 4 80mm fans which would sound like a vacuum cleaner going off. You would attach one of these to move almost the same amount of air. 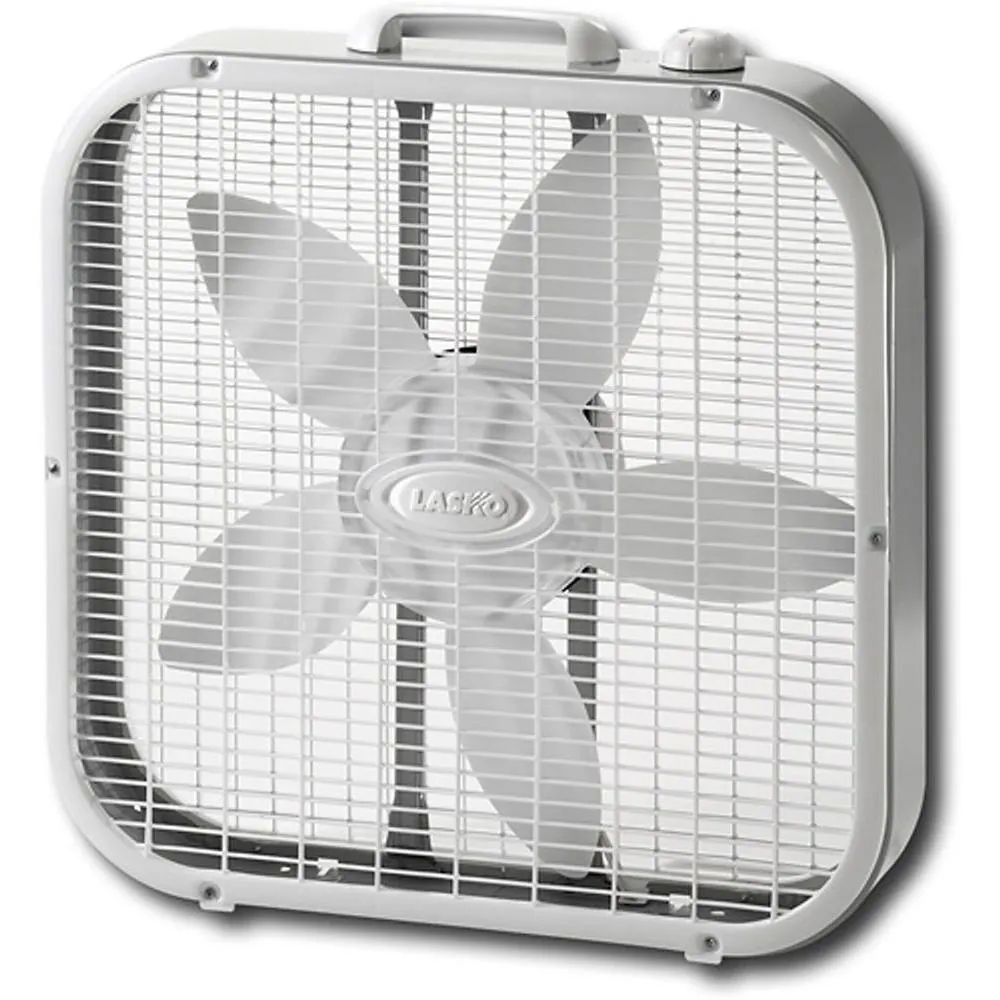 Of course, if you didn’t like the low air movement of the 200mm case fan, or are one of those people that scream the following:

I want something bigger! – Anonymous

Well! The best and most economical solution would be to join team Lasko if you’re in the U.S. from home depot and stick one of these bad boys on the side of your PC case and call it a day! It will keep the air moving around your PC without a doubt! To the average gamer, this is perfectly acceptable! Headphones are on all the time. No fucks given about microphone quality in discord! All good to go! A long time ago this is something we did something like this to keep our graphics card (Geforce 3Ti at the time) from exploding when the fan died on it and waited a week to get another. So if you want simple but effective. Lasko all the way!

However, in our scenario, we wanted something quiet. We’re playing with audio after all and wanted something that can move the air but not be annoying as fuck. The Aerocool was fine at very low RPMs but got -really- noisy when running full blast. So, we decided to unify with a family of fans we already have. 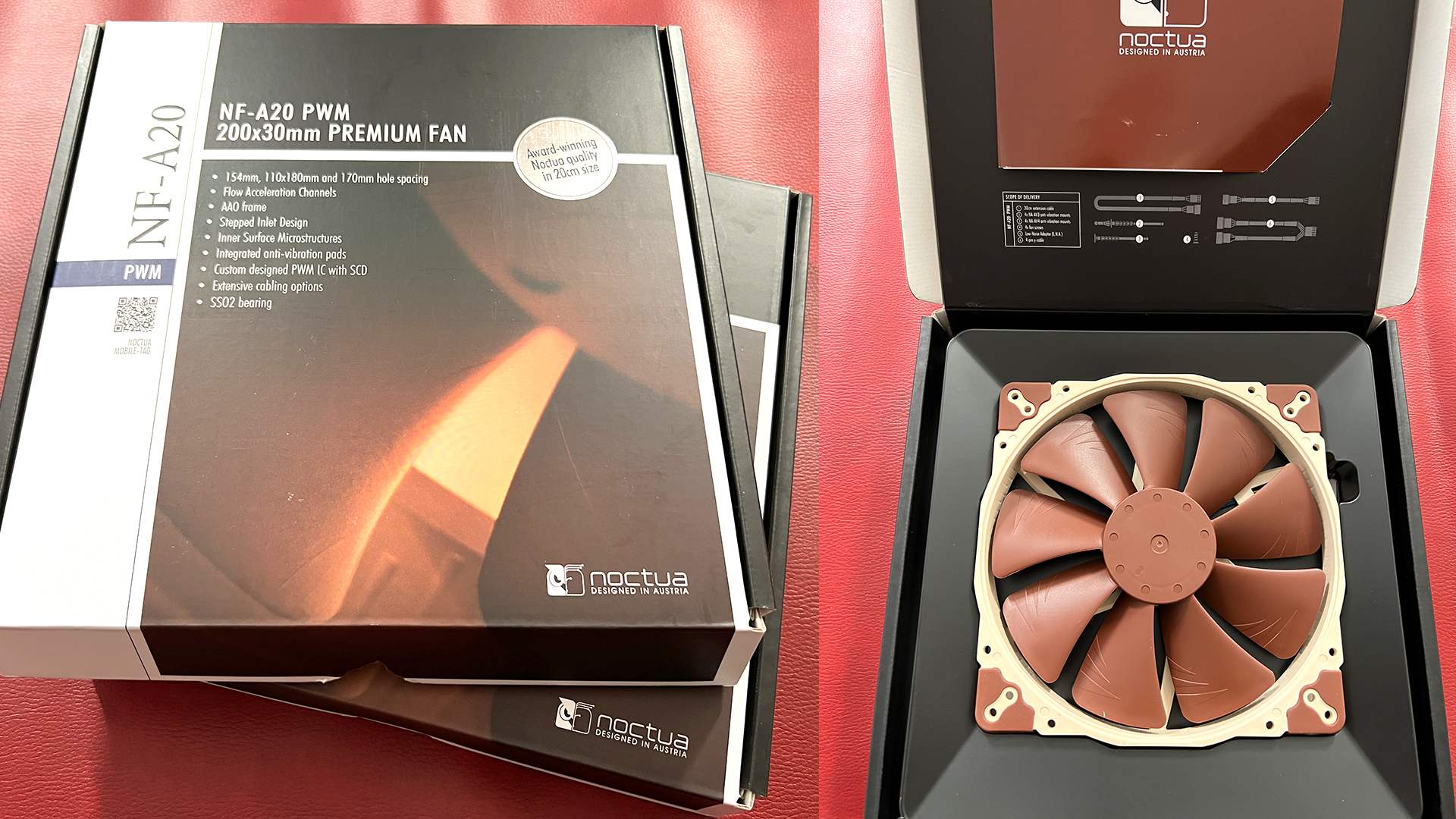 I got two of them, one for my primary PC and one for my video rendering PC both are in IBM X3200 cases. Now, before we go any further it’s time to address the packaging situation with Noctua here:

Is this really necessary Noctua? I mean, you guys decided to against the grain with your color standards instead of being conformists by making ‘just black’ fans like everyone else. Why the fancy boxes? Is it to appease the YouTube unboxing fetish crowd out there? If you just gave me some b-flute corrugated cardboard to keep the fan secure and put a thermal sticker saying “Noctua NF-A20” it would’ve been perfectly fine to me. Save you money, save me money. Because guess what happens after the fan is installed? the boxes go right into the recycle bin. I know UV printing is cheap when you make thousands of units. But cheaper if you don’t print at all!

Either way, we paid about $32.00 USD for this (more than the Lasko fan! But can’t have it all!) But we do like how Noctua is considerate of the multitude of mounting holes that are provided on this fan. And with a larger motor/bearing system. Yeah, you’re paying for quality on this one. On top of this. Noctua gives you a lot of adapters, and plastic mounts to secure your fan. So it’s kinda worth it! 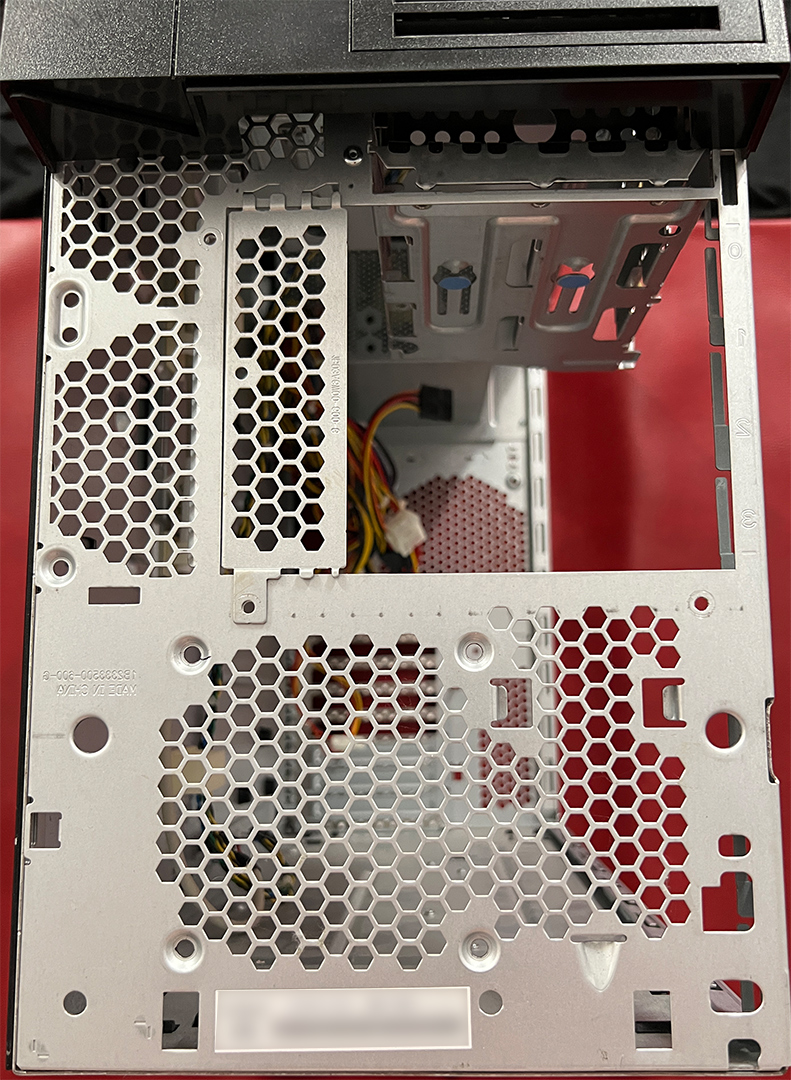 Our second PC IBM X3200 case – The serial number is blurred to protect the guilty!

Right, so similar to our problem with the Aero Cool, there’s no real good way of mounting this fan. Especially on a case that wants to use 1x 80mm fan and 2x60mm fans. Totally am not going to do that!

I’m not going to do what I did with Aero Cool and put two machine screws into the case and call it a day. I actually want to use the shock-absorbing mounts that Noctua gave to me. We suppose for better airflow we could go nuts with the Rotary tool with a carbide bit and cut out all of the metal in the front and then tap some holes with a drill. Which in retrospect would be better from an airflow POV but may not be awesome from a structural POV. We choose to keep the aesthetics of the case by using the mounts already there by making an adapter. 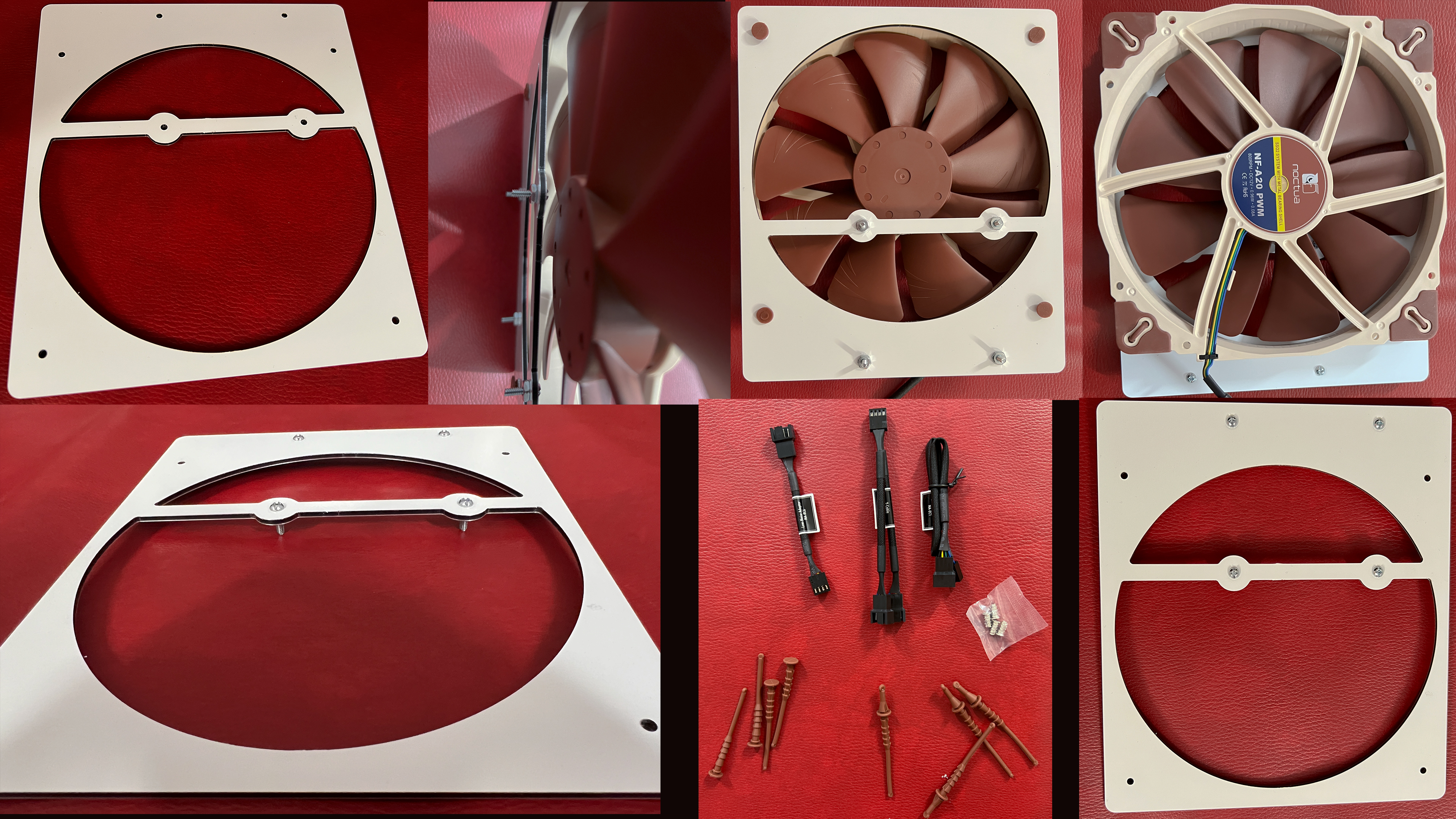 This 4k Picture montage above shows we’re using granny’s CNC router with a material known as ACM (Aluminum Composite Material) Which effectively is 0.2mm of aluminum, 2.6mm of PVC (Polyvinyl chloride, the same stuff plumbing pipes are made of), and another 0.2mm of aluminum. Its commercial name is known as “Dibond” which is a premium brand. There are other brands called “MaxMetal” from Grimco, “Alupanel” from Wensco, “Omega Board” from Laminators-Inc. But we went expensive with Dibond. In general, it’s easy to work with even if you have hand tools, and the final product doesn’t warp over time. We should warn people out there there’s some bootleg China ACM out there where it’s just aluminum floor scraps melted into sheets that cut for shit and delaminate from the PVC. So going cheap on this stuff isn’t a great experience.

All of the holes at first were 4mm in diameter. But had to widen to 6mm for the Noctua fan itself so the rubber noise suppressors can pass through. Also, note if you make your own variant of adapter to not measure directly to the inner dimensions of a PC case otherwise you could some extra metal inside the case that could obstruct your final product. Also, we reduced the size a little to make it easier to drop into place instead of fighting the edges of the case itself.

We dropped the button head screws first into the ACM with a nut to fasten it tight to the material. The head of the button does not come anywhere near the blades of the Noctua fan (about 3mm distance in part thanks to the rubber mounts but also the blades are recessed a little into the frame as well) so we put that together first, then mount the plastic mounts for the Noctua Fan. 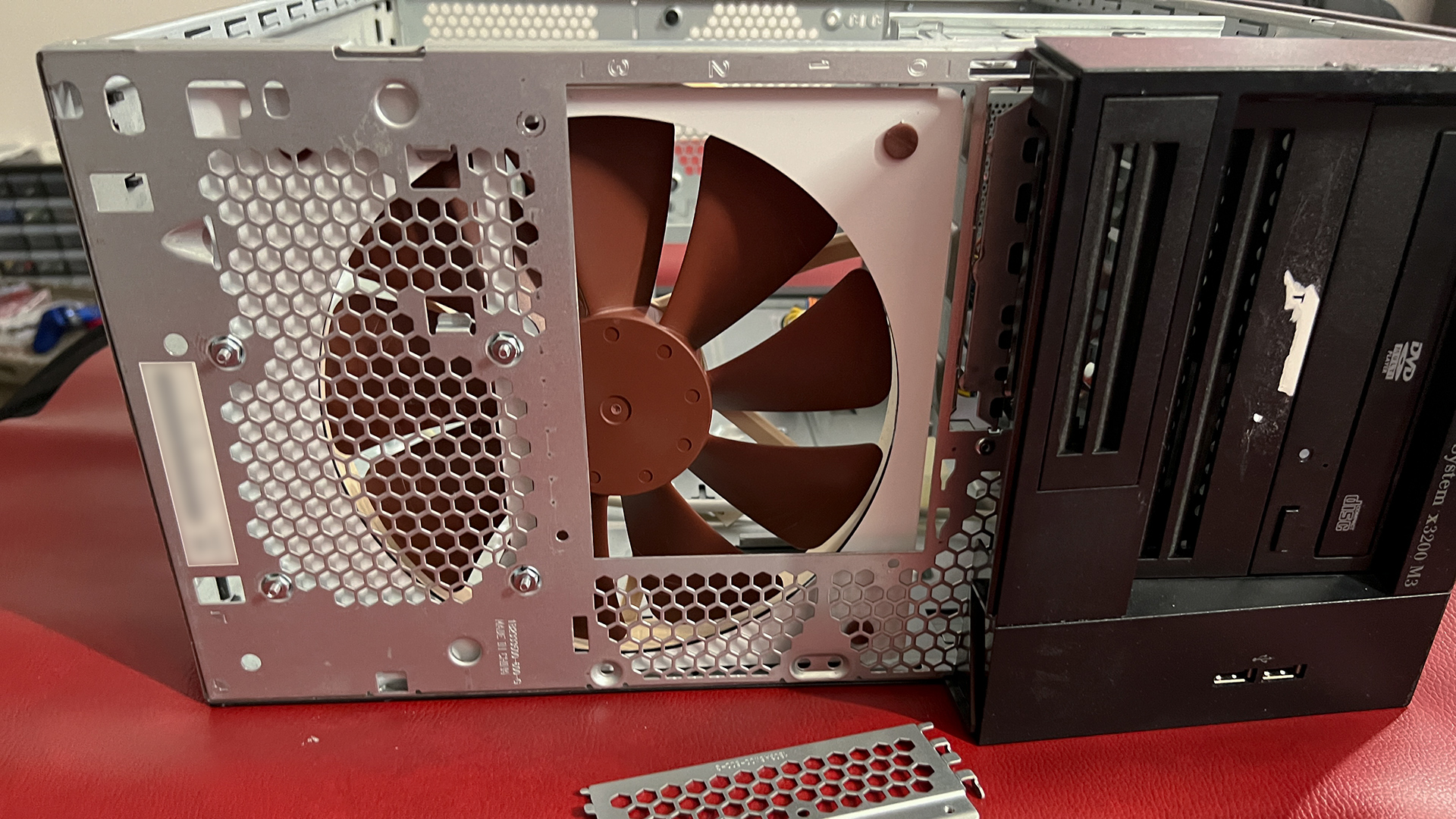 You can really see the importance of making that adapter when we have it mounted in the case as the upper-left-hand corner would just be floating with no support without it. As the button-head screws are facing outward it was just a matter of lining up the 80mm fan holes below and tightening them. DONE! 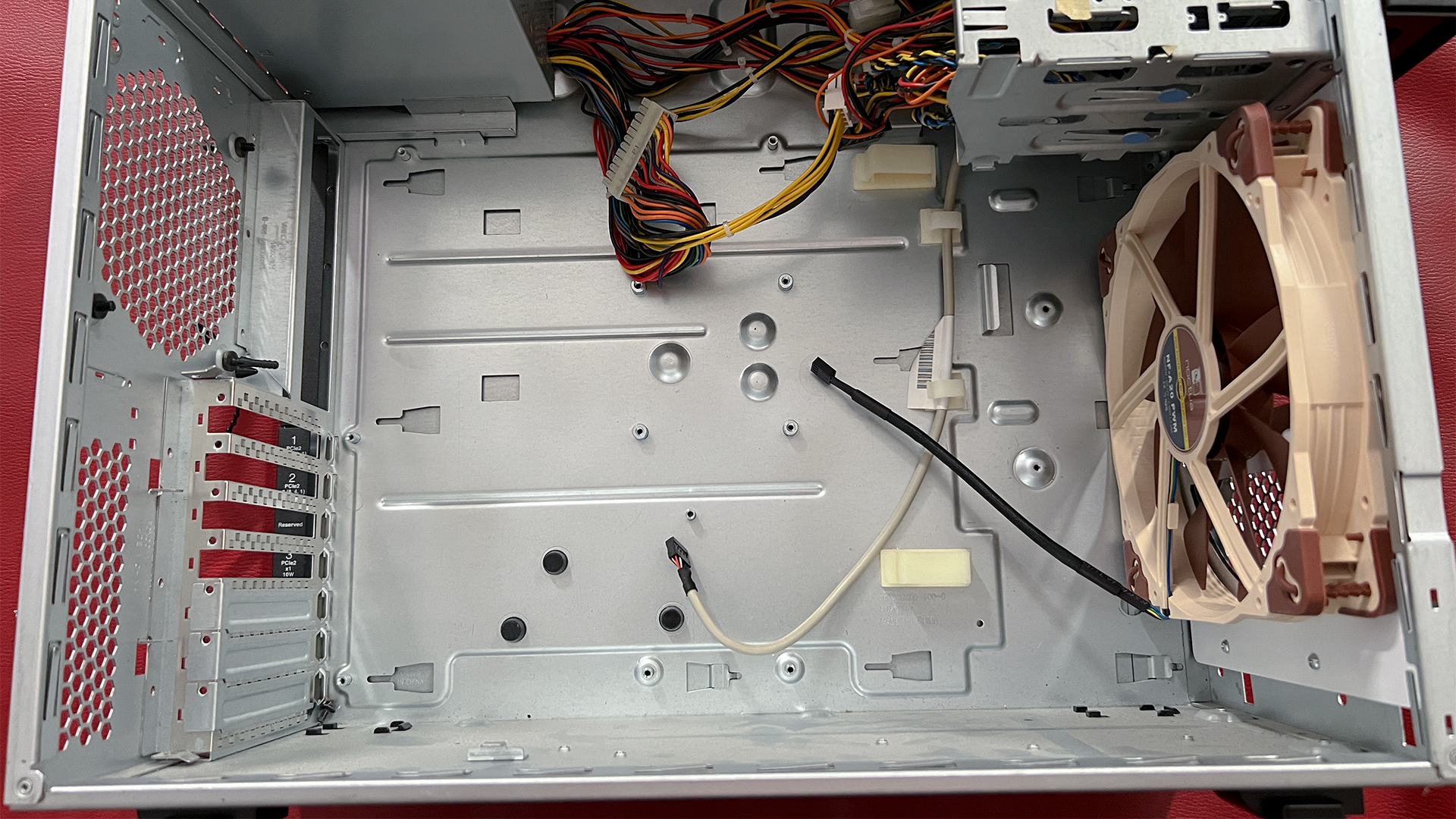 You’ll see that removing all of that metal in the IBM X3200 casing such as the Raid array bays as well as the full-height card mounts wasn’t a colossal waste of space after all now that the 200mm front-mounted fan can blow across just about every part of the motherboard. and with some carbon filters in the plastic door, it’ll keep the dust to a minimum.

This isn’t your sleeper PC S! What the hell! – Anonymous

Back to my sleeper case. 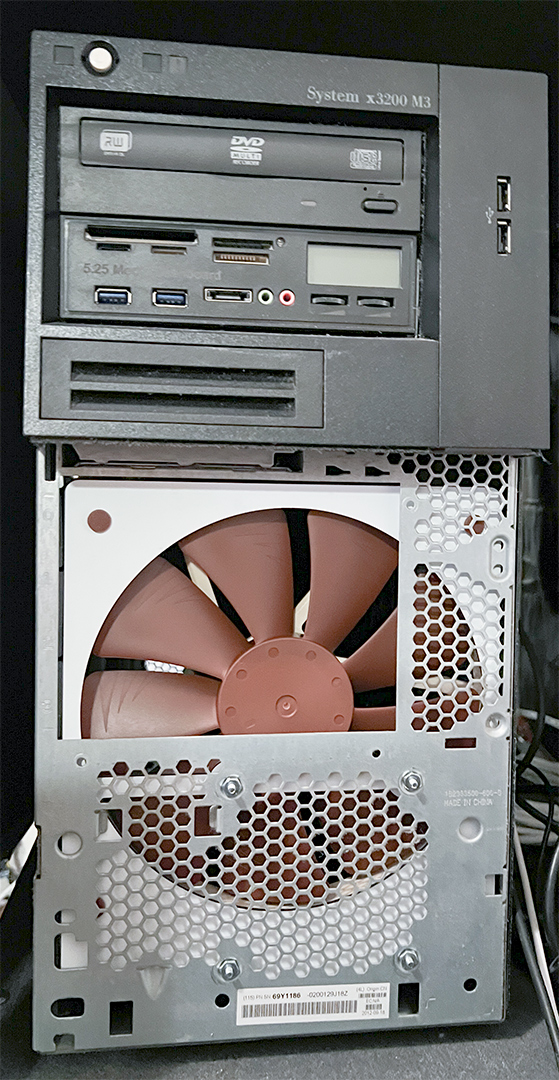 Here you go, we didn’t want to photoshoot my case as it’s a bitch to remove all of the wires from my rack but sure we’ll show you. 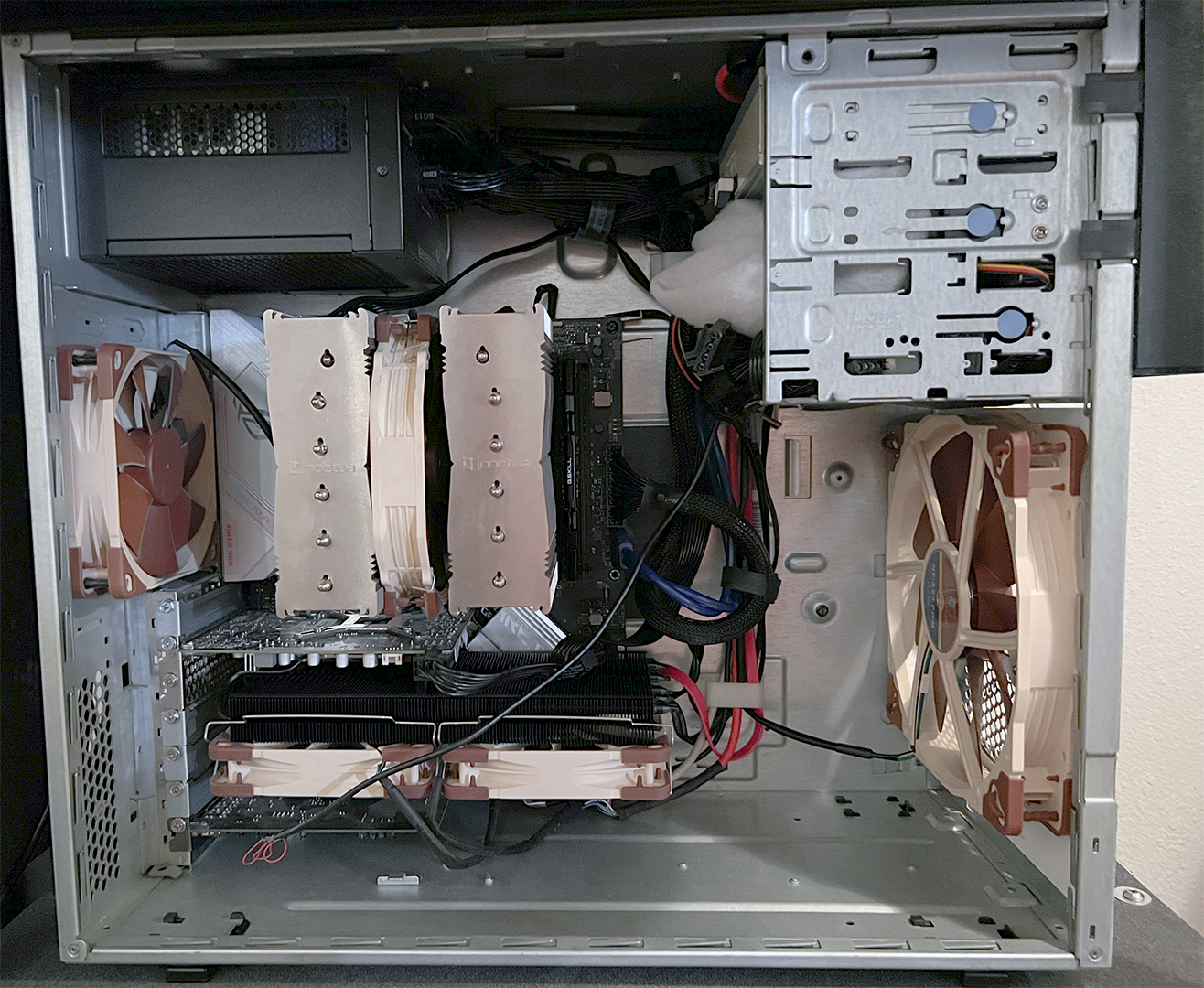 My main PC case is for the most part complete. Everything is uniform with Noctua from start to finish on the core cooling. And as the PSU was fanless we didn’t have to hack a Noctua into that so we’re pretty much done. Even though we could add more fans onto the CPU heatsink itself. It simply isn’t necessary for this configuration. 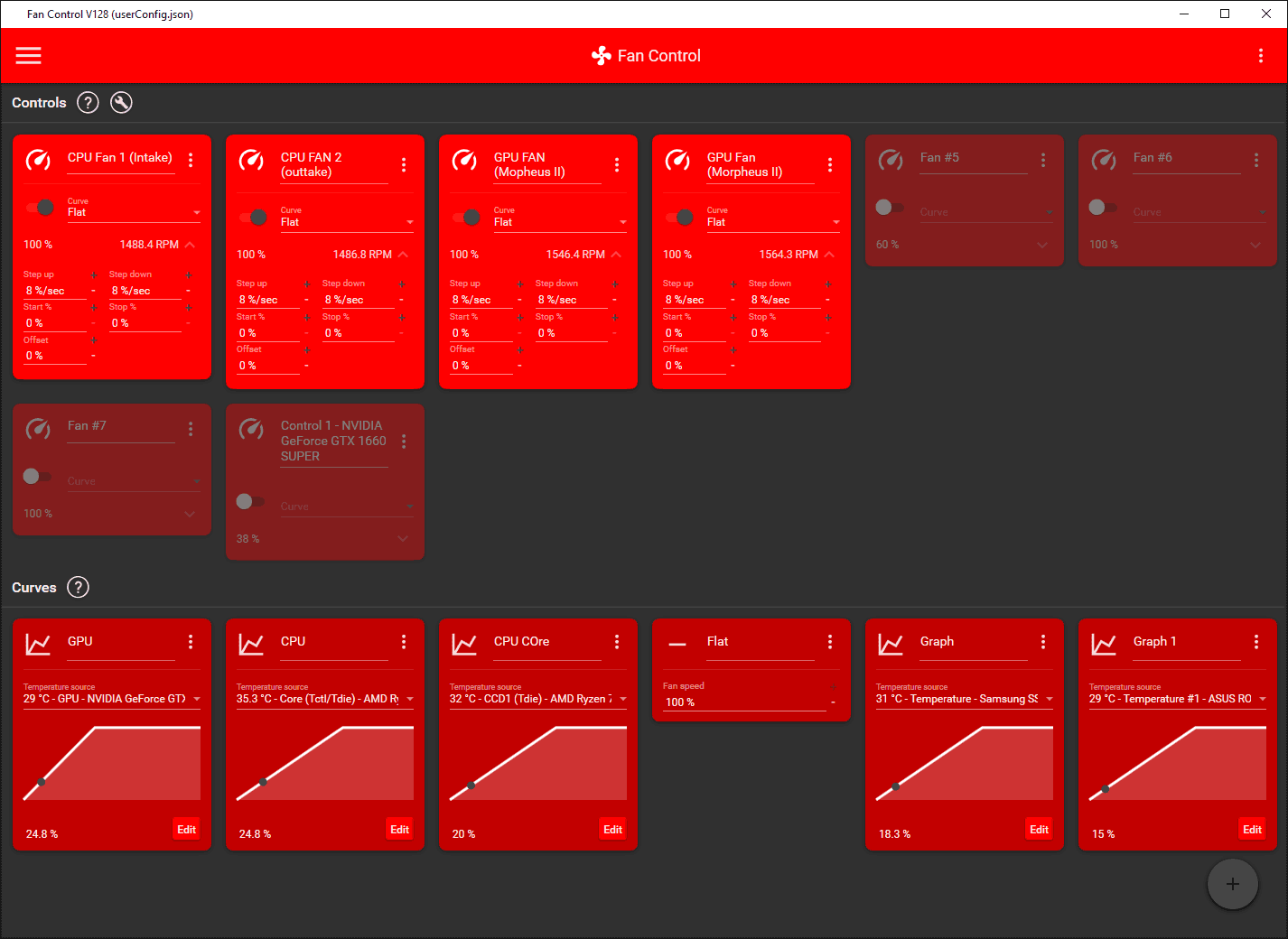 With the help of Fan Control as described in this blog, our setup is virtually quiet. We would have to put my ear right up to the case to hear a very low tone coming off of it when we’re doing audio production or when watching movies. If we’re playing an aggressive game we could start with the blades moving inside of the case more so than any of the motors. Although we lack any scientific data if the Noctua A20 was better or worse at CFM than the Aero Cool A2020L it’s at least very quiet even at full speed. So to those means, it’s a mission success in the noise department.

Now, with how much we’ve spent on heatsinks, fans, etc. we could’ve gotten a very nice water-cooling setup and potentially done better thermal management that way. But the nice thing with this setup is if one fan fails, it’s not really the end of the world. Especially with the size of heatsinks used throughout this rig. If your pump in your AIO fails, or your pressurized lines have a breach it could potentially threaten your PC. Finally, maintenance is simple. Can of air or compressor to blow out the dust off your PC and you’re done. after 3 years re-grease your CPU/GPU. We can live with that.

Finally, because of Fan Control, we don’t use the manual controls on the front plate of my PC. The front plate is still used for making SD cards for the Raspberry Pi and USB3 sticks and finally for the headphone adapter for our Sound Blaster Audigy 5rx. But not for fans anymore. So please, if you use Fan Control, donate to the developer on that one. It’s an amazing tool.