Every piece of information is important. Yoast Disagrees!

I decided to write up a quick article/review about one of the plugins that we use here called “Yoast” or as the plugin delicately puts it “WordPress SEO”. In an arrogant fashion that there is only one SEO package out there and that’s it. For those who do not know what this plugin does. Yoast attempts to understand how search engines work. Yoast then passes down automated knowledge to the WordPress blogger on how to write up their documentation to make it more machine likable. Because of machines like your blog entry then you might stand a chance at a human actually seeing it. Crap, we’re living in a rather grim state of affairs but it’s true!

The beauty of it all it this plugin does it for free provided you don’t mind Yoast constantly hounding you for money to buy the premium. The worse part about it is if you pay them $69(USD) to remove the ads. Yoast doesn’t entirely remove ALL ads from your site and Yoast doesn’t seem to care!. 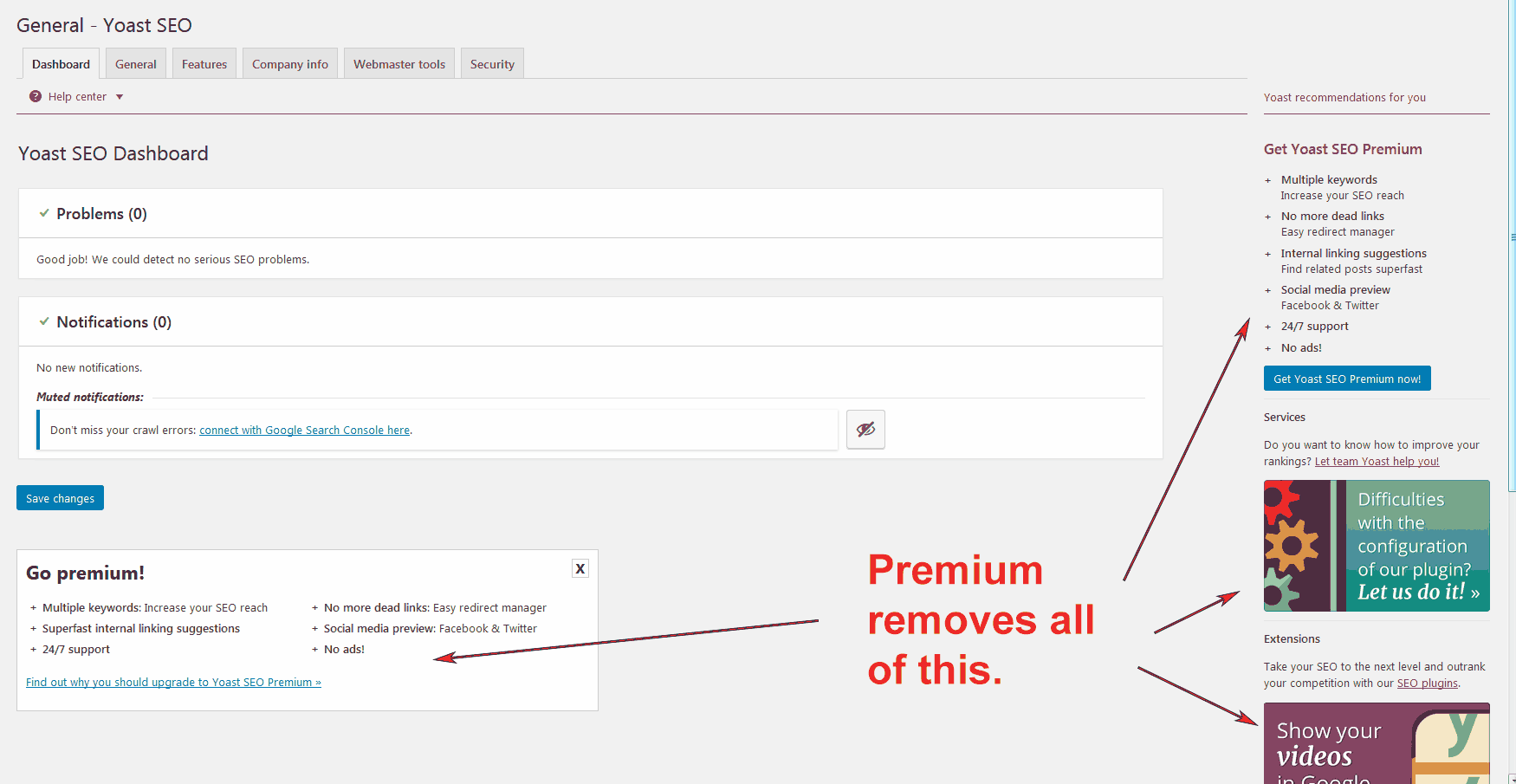 The picture above is what your $69(USD) hard earned American dollars removed from your plugin page. I do admit it’s a start! And the average WordPress user can feel good about helping out developers and that the developers kept their word by removing all advertisement remnants from their blog as promised.

If you have your settings to default Yoast will attempt to handle all sitemap files for you in order to make your website friendly to those search engines out there. But if you actually go and look at your website.local/sitemap_index.xml file that Yoast generates. You’ll notice it hyperlinks its name into all of your files.

When we questioned Yoast about what exactly does premium do and if it does remove the sitemap.xml file we were given the following response:

Premium removes the ads but not the branding from the sitemaps. – @amboutwe

Much to our dismay. Sitemaps will not be cleaned up by paying for a premium version. When stating that we would be more than happy to pay extra for the feature to sterilize our sitemaps.xml file we received another reply.

With removing your brand out of the sitemaps.xml file we hope! It’s bad enough that you to to build back-links on people who simply download your plugin but it’s rather treacherous if you attempt this on a global WordPress scale.

The branding is harmless, it’s not even a hard link, it’s in the XSL style sheet. – Joost de Valk

This is the point we completely disagree. Lets pull up /wp-content/plugins/wordpress-seo/css/xml-sitemap-xsl.php shall we?

You’re literally calling out href tags in the sitemap.xml file! You don’t even throw in a rel=”nofollow” to be nice about it either! Does that not qualify as a hard-link Joost? XSL style sheets are used to make the final HTML document which is seen by everyone! Not just the robots of the net. But you knew people aren’t going to look at the sitemap file. Just google. So why not put your site on the top of every single page it crawls right? That’s super evil Yoast! On top of it all highly dishonest to those which have paid a premium price to remove advertisements from your plugin.

Of course, you can edit this file and replace it with the following:

and re-upload it until Yoast updates it’s plugin (Which is rather often.) Since Joost is unwilling to even consider adding the option of removing his hard links out of the XML file this leaves me having to go find another sitemaps.xml file that I could use. Or hold off updating Yoast and instead keep a backup of the xml-sitemap-xsl.php file every time we need to upgrade it. Super annoying really!

I just wanted to write up a little something in the fact that we no longer uses Yoast SEO. Their arrogance is something that we cannot deal with anymore and frankly, we are sick and tired of modifying our XML files in order to keep their name off of our site. Despite multiple times, we’ve contacted them Yoast feels that they don’t have to change because they are number one. What is a lowly blogging site going to do to them right?

Well, this lowly blog site is going to provide a solution.

We’ve since switched over to SEOPress now. Their interface may not be nearly as elegant as Yoast’s but their software covers all of the bases and regardless of premium or free versions they do the one thing that every blogger in this world should demand. Which is after the developer is paid to pretty much stop using my paid website as a grounds for ad-space. Yoast is maliciously jacking people’s site-maps in order to boost their own reputation with the search engine community as the very thing a search engine bot looks for is that sitemap.xml file!

Just because you’re the number one plugin Yoast does not make you the best plugin.

I still gave this plugin four stars because simply put it does do its job in warning you if you’re doing something dumb. For those plugin designers that are reading this thinking that we’re being petty and selfish about the whole situation. Consider the fact that we would be more then happy to pay the premium if it meant removing any and all branding facing externally to both robot and user. We completely understand why free plugins advertise themselves. Because if you aren’t going to get any money from the blogger then at least you’re going to build back-links to make your program important above all others. Shit, we even understand that by the simple act of making this blog we are in fact helping out Yoast. Good news or bad news is irrelevant as it builds up linkage to the company. But if you want money don’t lie to the faces of millions and say it’s absolute truth. Because that’s why many people consider the core nature of SEO bullshit.

2 thoughts on “Plugin review: Yoast needs to stop linking itself.”