Ouya USB is great really! It gives the Ouya extra space to store games, ROMs, pictures, practically everything that you would otherwise have problems with the confines of an estimated 3.2GB of free space that is on internal memory because the Android OS is taking up over half of the space! However, one of the annoyances that people do complain about is how long it takes to scan games.

A lot of this has to do with the quality of the USB thumb drive that you are using. But could it be something more? Could it be the way that our drive is formatted that is slowing down the Ouya? What I am talking about is partitioning your USB Drive to something other than the normality in order to attain stability and speed out from your Ouyas USB device. To start, let us go through the partitions that have been known to work on the Ouya:

The testing environment for Ouya USB: 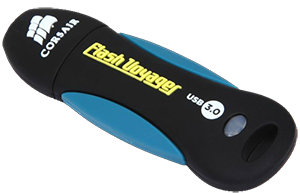 To ensure our test results will not be affected by the limitations of the hardware; I have chosen this Corsair USB thumb drive model CMFVY3S-64GG Because it’s fairly large at 64GB and I got it very cheap for around $27.00 on a special blow-out weekend on NewEgg. According to the company, this USB stick is rated read speeds of 85MB/s and write speeds of 75MB/s. Of course, those read and write speeds are based on a USB 3.0 bus.

Note: I would not suggest this stick for your Ouya! The reason why is the rubberized plastic shell presses against the HDMI of the Ouya, this could cause physical damage to the only Ouya USB port on the back.  A workaround, of course, is getting a very short USB extension cable, But the Corsair Survivor series, however, fits in the Ouya USB just fine.

On the Ouya and other USB 2.0 bus units, it will be slower due to the fact that the combined bus speed of a USB chipset is 480Mbps/s or 60MB/s in theoretical operation. I state the ‘theoretical’ side because a loss of speed can come from the USB bus chipset itself, the NAND flash on the USB chip, or other external issues such as the usage of USB hubs inside of cheaper hardware such as laptops and desktops.

I shall also be using a Corsair Survivor 32GB USB 3.0 stick model CMFSS3-32GB in this test as well. Even though not nearly as fast as the Voyager at 60MB/s read and 50MB/s write. It’s still more than enough! Either way, your Ouya will Never be able to achieve the full bus speed that this stick has to offer.

The utility that I use when testing memory that I am not sure if is totally legit (i.e. Chinese ram) or if I just want to benchmark a USB stick to see its true speed is a program called Check Flash. There is absolutely no documentation as to the developer or website that I could refer to. However, I was pointed to this software as the leading verification tool whenever you are purchasing memory from eBay vendors and is used to verify the overall integrity of the drive that you received. Even if you received it brand new this program is a good idea to verify that the product you received is %100 perfect.

This program is incredibly dangerous to a person who does not know what disk testing software does. By its very nature, it writes and reads to every section of the drive resulting in the destruction of any data that is on the drive. Also, because of the nature of flash memory where there are so many writers that are allowed before it has the potential to corrupt itself, putting this program in long-test mode or repeating the tests over and over again is a very bad idea as it could destroy the USB stick itself. This website takes no responsibility for the personal, physical or cognitive damage this program may cause to you. As always programs that you download off of the internet may have a virus that not even the author is aware of. Always have a virus checker installed when downloading programs like this off of the internet.

I will be using my Samsung N150 laptop with windows 7 loaded onto it. This laptop only has a USB 2.0 bus and I believe all ports are shared via an internal hub. So it should give us a rough idea as to how this USB 3.0 Corsair stick performs in a USB 2.0 environment. 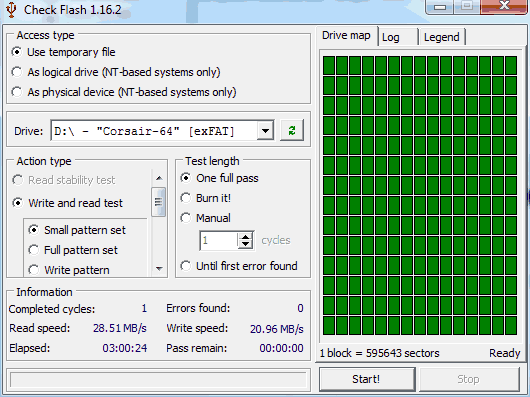 The picture above shows that write speed is 20.96MB/s and Read at 28.51MB/s. I expected it to do a little better with writing, but on the Ouya it’s the read speed that is more important. 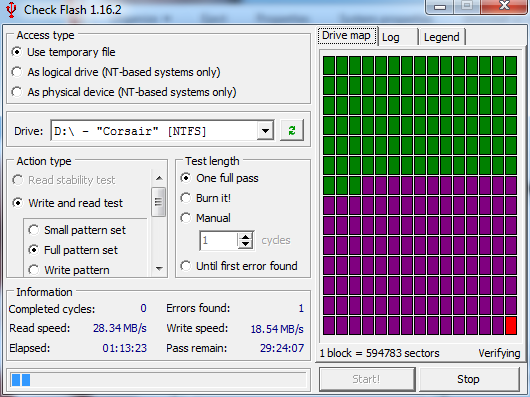 I ran multiple USB sticks through this same process but apparently, there’s a bug in check flash where it always marks the last sector of the drive as BAD if the drive is formatted in NTFS. This is actually good to show you as an example of what happens when Check Flash finds a problem with your drive. Since my drive formats just fine with exFAT I shall consider this a bug in the software and test only in exFAT on the windows side. 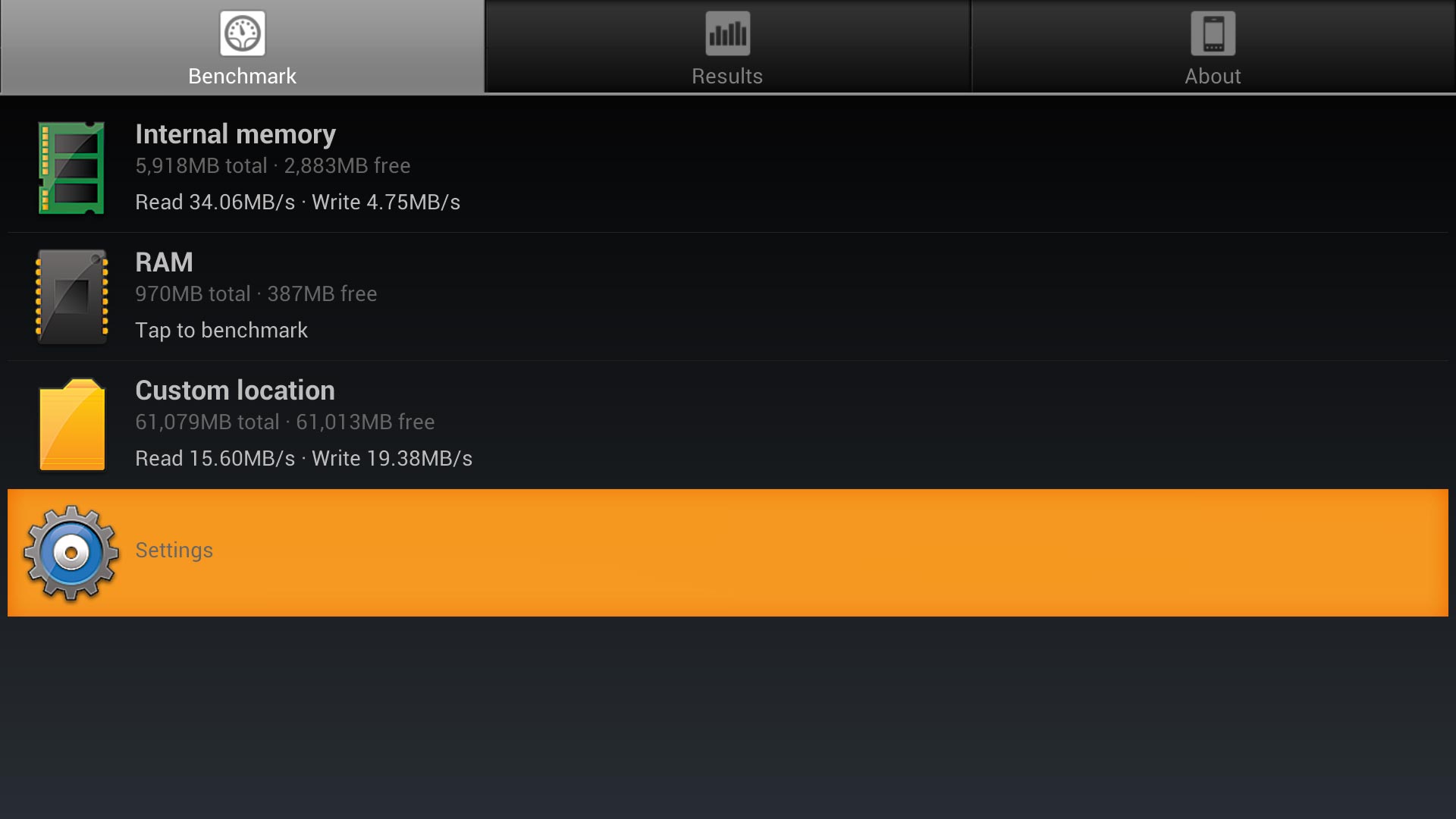 The program that I like to use for testing the speed on android devices is one of the more popular ones on Google Play called A1 SD Bench. The reason why I like this program is you can define custom locations so in the case of the Ouya it likes to mount the USB drive into a directory you can simply specify the folder and run the tests on it. To set up the /mnt/usbdrive folder simply arrow down to Settings.

Check the box to Add a custom location and then specify the location as /mnt/usbdrive which is the default where Ouya mounts the device to. All of this can be done from the Ouya joystick there is no need to bring out a keyboard during any of this operation.

The readings were interesting because I expected the EXT4 partition to do much better. I feel it may have actually been hindered by the fact that it accesses once every few seconds all of the time possibly checking INode data but I am not too sure. Either way, the FAT32 is what won out on the tests between both of my USB Sticks. It sticks. I personally use EXT4 and will continue to do so because of it’s stability and ability to handle large files.

Another thing I found interesting is the Internal Memory of the Ouya and how it rated. Where it gave an excellent rating of 34-35MB/s it’s the ability to write data is abysmal to say the very least. Once again, writing data to the Ouya is nowhere near as important as reading as beyond installing apps and saving profiles, writing is at a minimum on the Ouya.

Does having a fast USB drive have any effect on the performance of the Ouya?

No, it does not. Since a lot of the apps for android are relatively small due to phone restrictions. Load-time is hardly noticeable. However, when doing file operations on the Ouya it becomes noticeable especially when transferring music and pictures over to it. Speed may be an important factor when playing movies from a hard drive or USB stick to your Ouya so it might be an important factor to consider when buying a stick.

As of this time in the documentation, the Ouya can only auto-mount one device at a time. plugging in additional storage technically should be possible via a shell in ADB but it does not mount such things automatically.