Dusting off some of the old hardware that was in my closet we had a motherboard for an old Xbox Debug unit. For those who don’t know what these things are. Microsoft gave development companies debug units that had the same amount of ram as the Xbox development PC. But allowing devs to transfer their game onto the hard-drive and show others or beta-test on a pseudo-Xbox before finally publishing on legitimate Xbox’s. Debug kits also sent feedback showing how much ram is being taken during a game, CPU power, etc. 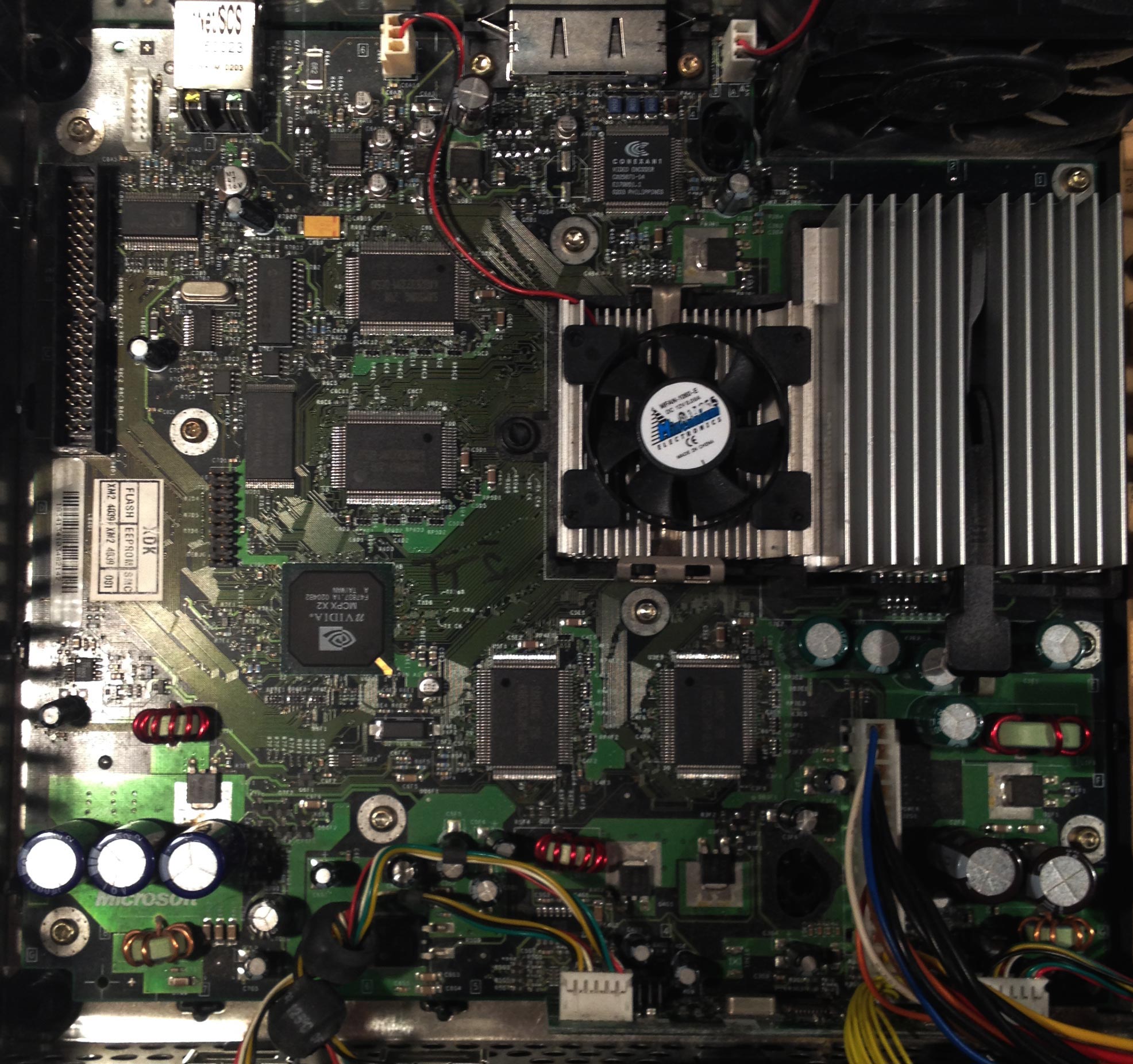 The Xbox Debug Board is very similar to a Xbox V1.0 Retail Except all RAM slots are populated.

The the reason, why we picked up one of these, was for the pure pirate in us. And no! Not for playing commercial Xbox Games.I liked the MAME emulator. I liked the fact that you can take something that emulated old arcades and put it back onto a box that is literally designed for games made sense! However, MAME on Xbox crashed a lot because a lot of the MAME titles that we liked simply took too much ram! No problem if we bought a board that already had 128mb of ram on it! There were guys that were soldering the ram onto Retail Xbox’s and adding mod-chips to it. But back then they wanted almost four times as much as straight-up getting a debug board. Back then I didn’t know how to really manipulate this board to my liking so it stayed in the closet until now. 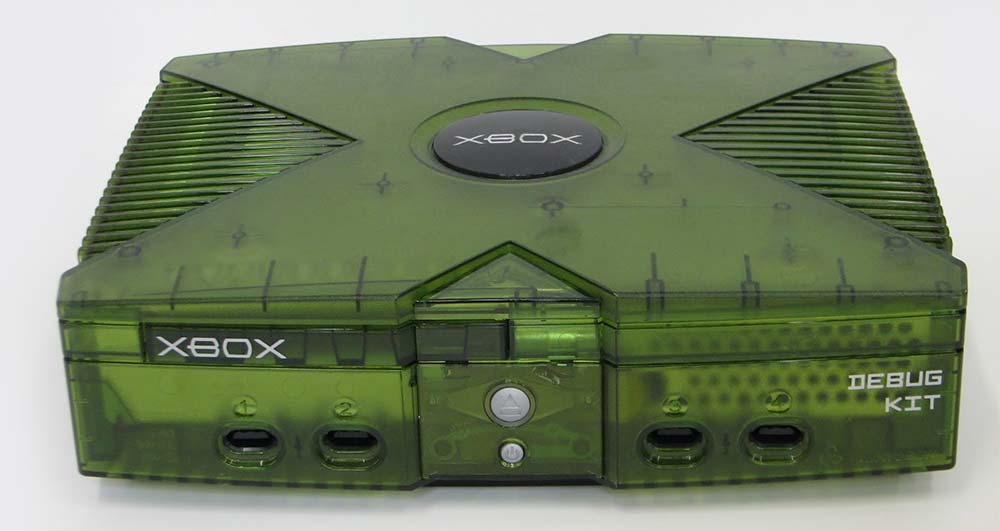 The downside of course is we didn’t get the cool green case that is identical to the Halo edition case but instead of saying halo in the right hand side it says “DEBUG KIT”. But that’s okay 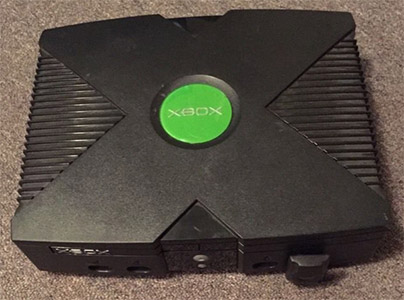 Got a case for Xbox Debug board but issues with the PSU inside:

After spending about $18 on eBay to get a broken Xbox unit that had a Samsung DVD drive. Which is more than worth the $18 on its own. and Power supply. The motherboard in it didn’t power at all which is great. Because that’s exactly why the debug main board was purchased!

The first thing that was noticed is a common issue with v1.0 power supplies for Xbox. Where the solder joints were either cold or from all of the stress of gamer shoving the cable in it begins to crack and break apart. What eventually happens is there would be arcing inside of the Xbox to the point where traces can get blown completely off of the board! With a quick fire upon our soldering Iron and pour some new Solder in it’s back looking nice and shiny again!

Unlike Retail consoles where the hard drive is BIOS locked using a code which exists on the EEPROM of the Xbox main-board to handshake and unlock your hard drive for you. The Xbox Debug does none of that mess. Back in the day, I thought I had to use XboxHDM to copy everything. So after acquiring a copy of the XDK 5849 with the 5849_Recovery.iso from the usual places. We quickly realized that you don’t even NEED the original hard drive that came with your dev unit. You simply install any IDE drive (or SATA drive with a SATA<->IDE Controller) insert the burned 5849_Recovery.iso and let it work its magic making you a new drive. Big time warning for those who think they can use the Recovery.iso on a retail unit. One of the things that the XDK recovery CD does is flash the BIOS. If you try this disc on a retail unit you will no doubt brick the motherboard from EEPROM corruption. We’re pretty sure Xbox made this in the first place to both update developers consoles and also in case a dev-team gets a little too crazy with deleting things off of their Xbox that they can restore it to factory settings after they are all said and done which is cool. 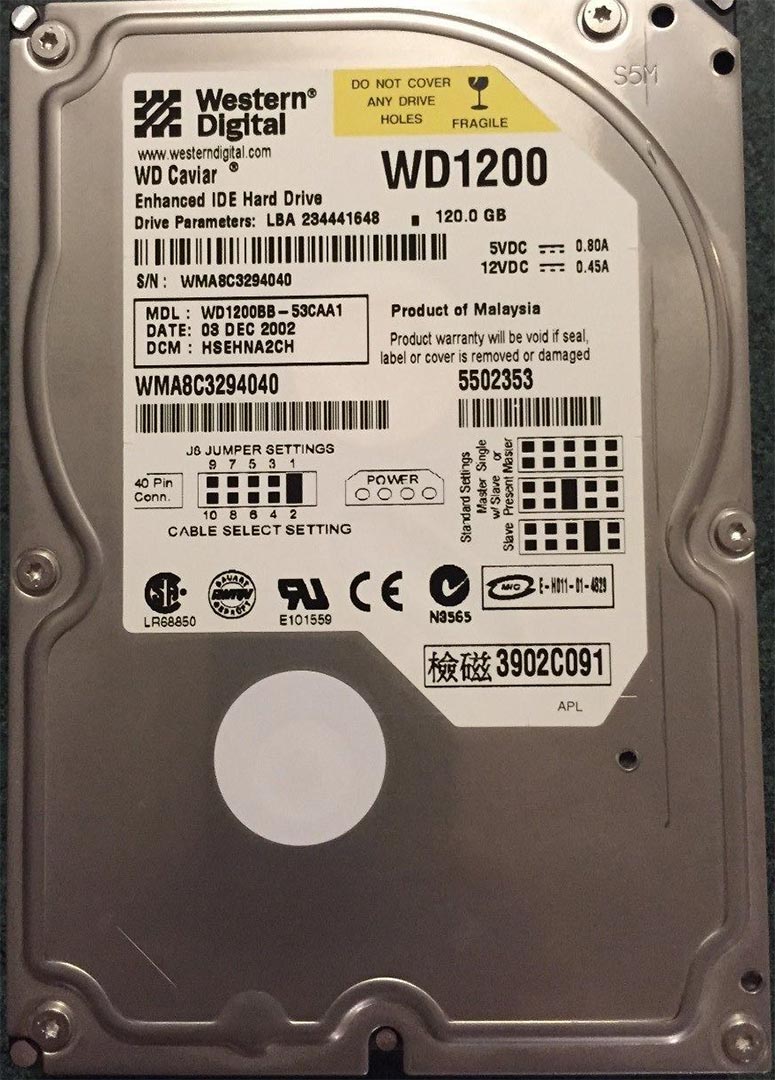 Also, since there is no worry for drive BIOS locking. The WD120BB which is missing EEPROM locking is useless in a retail modded Xbox but perfectly fine in a Debug Xbox! Top that off with upgrading the ATA-66 cable that all Xbox’s tend to have for an ATA-133 cable which helps with improving bandwidth accessing the hard-drive. The fit is a little tight and you have to install the ATA-133 cable backward. But it does work and gives you a %10 performance boost!

Setting up the PC environment for the Xbox Debug kit.

In order to make the dev or debug kit actually usable by us lowly end-users. We have to first establish a connection between the Xbox and our computers for data transfer. There is currently two methods of doing this.

Enough time has gone by to mention the fact that the XDK tool-kits for the original Xbox will not let you use a function that is called “Xbox Neighborhood” which is a crucial element in transferring home-brew files over to the Xbox debug console. Unfortunately, This function does not work in windows 7. Only Windows 2000, and Windows XP which you could set up a virtual machine for and go that way. But the Xbox Neighborhood is a key function from taking a piece of strange Xbox hardware that was only used by Devs and making it a little more useful (and illegal, but seriously. this unit is 13 years old! I know Microsoft wanted to kick the Original Xbox to the curb as fast as they could when the 360 came out. But Sorry, I’m keeping this piece of history alive.)

Thanks to XboxSurgeon@assemblergames for pointing this out to the rest of the net. Yelo Neighborhood which is apart of an engine modding for games is a nifty little utility that is open source and reverse engineers the Xbox Neighborhood protocol used for talking to your dev used based original Xbox’s. The advantage of this program is it’s compatible with Windows 7 and 8. Because it’s open-source this means I can actually provide a link for this wonderful piece of software. 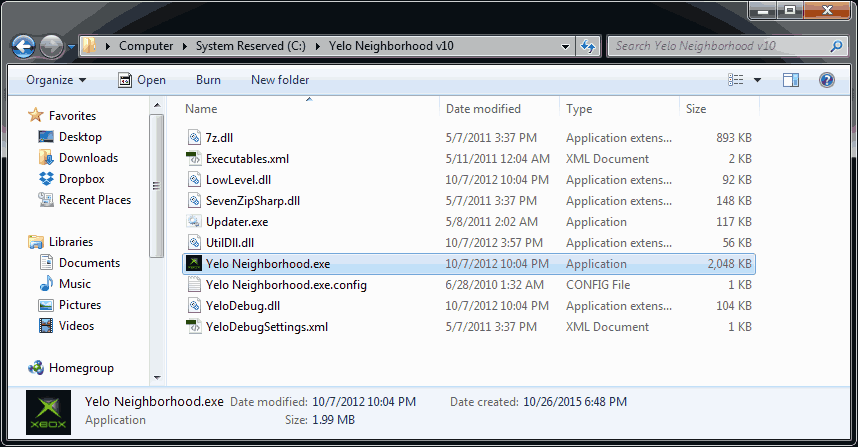 With your Xbox dev or debug unit powered on. Extract the archive to a folder of your choosing and Click on Yelo Neighborhood.exe to begin

It may complain about using a hacked DLL before connecting. But after hitting OK connection was established reguardless 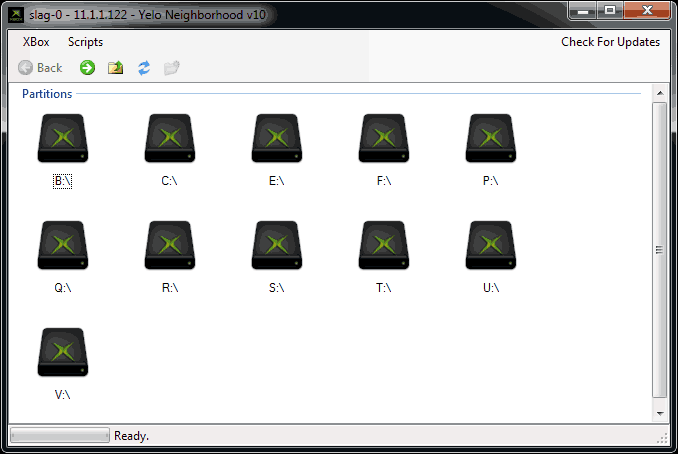 If everything is right it should connect to your dev or debug Xbox as shown above. As you can see, it connected to my debug unit which the one we’re using is lovingly named “Slag-0.” If you do not get this screen and you have verified your Xbox debug or dev unit is on it’s okay as it will give you a dialog to enter the IP address of your Original Xbox manually .

Now, you should note that Yelo Neighborhood is a little on the crash happy side during initial testing. The script access or the update buttons would crash it right away. This could just be because of that hacked DLL. But as far as copying necessary files to your Xbox Debug or Dev unit it did not crash when transferring files to the unit. Yelo Neighborhood might not be good for recovering a dev or debug board from scratch but it’s great at copying files which is important for the next section.

The .DXT and .BIN file modification for the Xbox Debug

We got our connection issues resolved let’s talk about some of the files we need to really make this Xbox happy. You will need some .DXT files which act almost like patches for the Xbox Debug environment to get the full usability out of the XDK Launcher. The first thing you will probably want is to allow the Debug unit to actually play signed .xbe files. By default, the debug unit can only launch unsigned .xbe files. Anything signed would immediately throw an error stating that the file cannot be played.

Lookup “Hack-devkit-GueuX-V2” to get the Volume-B.dxt and the xboxrom.bin file pretty straight forward. Install the .DXT first. reboot. then install the xboxrom.bin into the B: through Xbox Neighborhood. (Note: Volume B: in the XDK world is like the root of volume E: for a soft-modded retail Xbox)

Resize the Xbox debug drive from default 8GB to a maximum of 120GB.

Next if you were like me and you threw in a 120GB drive you’ll want to get access to the F: partitions. There’s a fdrive.dxt out there that will take care of that and then you can use a home-brew program like “XBPartitioner”. It’ll bitch a lot that you don’t have a BIOS that supports LBA48 which means you can’t go crazy and install 1TB hard-drives such as soft-modded or chip-modded retail Xbox’s. 120GB is the limit which is okay.

I also had to install a third-party launcher like Evo-X because the XDK launcher only scans whatever is on the E:/debug/ partition. Evo-X does work and scans every file you have on your F:/games and F:/Emulators folders, however, the 4-button soft reset doesn’t work on debugging. Why? Not entirely sure. But at least FTP works! So once that is going you can go back to your Windows 7 PC and happily transfer files up to it without problems.

XBMC4Xbox v3.5 reads that I have 100mb of ram on my Xbox. So the ram improvement is definitely there!  And it doesn’t run out of ram when I grab scripts from SuperRepo which is good! I haven’t had a game in MameOx it didn’t like. and I need to do more testing with StepMania but it seems to like it a lot more as well. An Xbox Debug board is a bizarre piece of technology that if you manage to find one for cheap somewhere, you may want to pick it up. It’s a lot less headache then a softmod with only a handful of files you can download on the net. And it’s good to keep.