Done with the Pi and onwards to securing an Ouya it has certainly been a while since I posted on my own blog. I guess that happens when you’re in the Christmas rush and your job relies on the notion that everyone needs their food and drugs. But I can save that for another story.

At first, I thought I could load a lot of games on it and start running. Of course, I downloaded quake3 because it’s arguably the most aggressive game on the Pi. Although everyone else has been able to overclock and keep it stable. anytime I go above 700Mhz it dies instantly. The most common issue is a bad power supply. Which hey I was totally cool with that. So I busted out my ATX power supply with 250 watts behind it. 45 amps on the 5+ rail. and guess what? it still kept crashing. until eventually even when I leave it at 700mhz it still crashes. what the hell?!?

Reload Raspbian, compile from source AND tried the pre-compiled distro. all the same results. Very frustrating.

I also tried the Retroarch system only to find out that half of the executables don’t even work when you compile from source and the menu system is all sorts of jacked up. requiring a lot of configuration to get the sources that did compile working with configuration files.

The bottom line, The Raspberry Pi is not ready for production-level work. In fact, a lot of ARM processor technology is just starting to dawn on developers that maybe they should get their heads out of their ass and begin to develop things for arm since you even have windows tablet computers also running arm-based processors and OpenGL-ES compliant 3-d hardware. It’ll take a while on the software front for the Raspberry Pi to catch up. maybe then I’ll buy another. 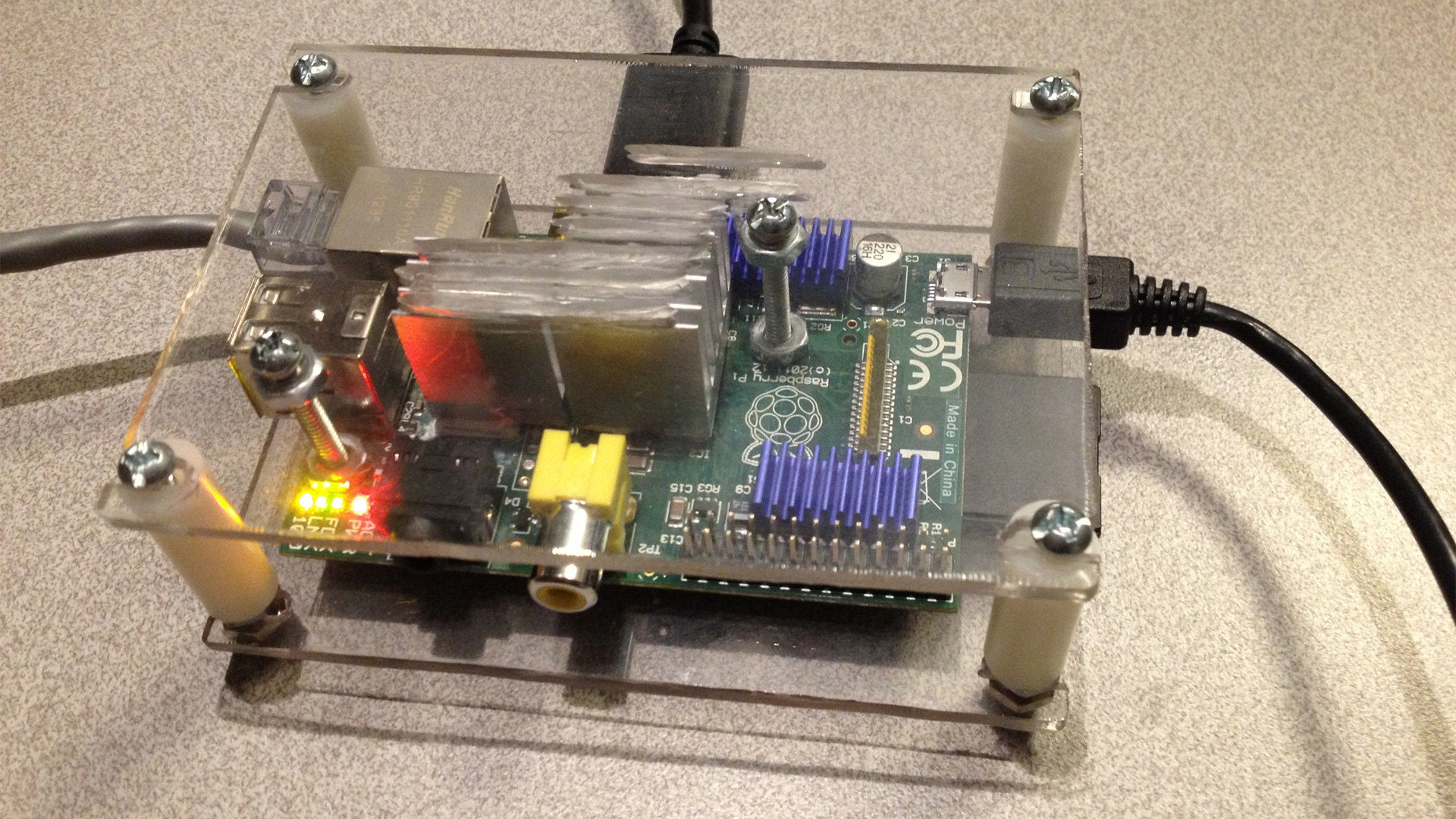 Just thought I would show you a picture of my Raspberry Pi complete with custom case that I built for it. The Nylon pegs from Home Depot for $2 and the screws I got from a local Milwaukee place called “American Science and Surplus” for about $80 for both the screws and the nuts for it. Sure! I could’ve just got a nice laser-etched casing. But really what is the fun behind that? Dremmel rough cuts and sanding all the way! And it’s really stable thanks to the throughput holes on the REV.B Raspberry Pi Boards.

Now. Onto the Ouya.

One of my results with the Pi showed me something with XBMC. which is when the PI was clocked to 1Ghz XBMC ran silky smooth at 60fps with the transitional effects on the menu screens. (of course, it only lasted 30 seconds before it would black-screen and crash again) The Raspberry Pi may not be the XBMC solution that I thought it would be. HOWEVER! Coming out in April Ouya pre-orders will be hitting people’s doorsteps. If you don’t know Ouya check it out here at www.ouya.tv

The thing has a Tegra 3 Processor which means it’ll be above 1Ghz in processing power. Excellent! To top it all off XBMC is one of the official applications which means no need to remember tons of command-line code to get it compiled and working on this unit which I’m totally cool with that too (although int he Ouya demo’s it looks like they were running Eden V11 instead of Frodo V12)

The other aspect I liked about the Ouya is they “Claim” to be open source. So you can take that with whatever grain of salt you want. If it is open underneath android then, in essence, I can simply inject my emulators onto it to have a reasonable game system on the cheap ($100) which to me is totally cool. And there really is some android games that deserve a D-Pad and not use a multi-touch screen like an android tablet. So in a sense, this will help a lot with ports over to android because it’s putting the port where it belongs which is back onto a gaming system.

I’ve pre-ordered mine so I wait for 3 months. Which eh, it’s how long I’ve waited for my Raspberry Pi. So it’s not the end of the world.

I will, however, leave a final note about my Raspberry Pi. which is although I was a dick and was overclocking like mad and possibly burned out my system. That the Raspberry Pi in a strange way compliments the Ouya because both are arm processors and the mission of the Raspberry Pi is to teach people (children) how to program. While the Ouya wants to be the open door for developers in the gaming industry to get in without joining the tent of one of the big three (Nintendo, Sony, Microsoft)

2 thoughts on “From Pi to Ouya”