Ebay feedback modeling itself after Wal-mart. Where the customer is always right even when they are wrong!

This rant about eBay feedback should dovetail nicely with a previous article I have done since in the past I have mentioned how I do sales on eBay, primarily in the electronics section of the site. I do a lot of both buying and selling of items and thus I have seen both sides of the fence in terms of how things are done. It used to be with eBay that feedback measured what kind of person you are to do business with. That people both buyers and sellers can give you positive, neutral, or negative feedback, depending on how nice you were or how much of a complete prick you are.

eBay felt that this system was being abused and driving potential buyers away because sellers that have no ethics or integrity would just exchange negative feedback even if there was no fault to the buyer. If a buyer throws negative feedback on a seller because the seller just decides to take the money and ship them rock in a box instead of saying “a new game system/”

From the buyer POV:

You can give out positive, neutral or negative feedback; And depending on your choices you can specify what you liked or disliked about the overall transaction. In general, if people get good ratings, eBay will offer rewards to the sellers or buyers in the form of coupons as a “Thank You” for doing business with them. When you received negative feedback you had the opportunity to at least defend yourself if the accusation was baseless or had nothing to do with the transaction of the item such as revenge voting from the buyer or seller.

This is actually how eBay used to be for both buyers and sellers.

From the seller POV: 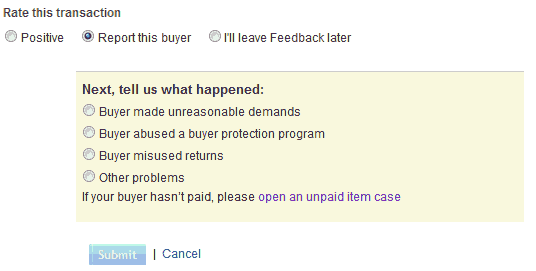 The seller menu for rating a buyer has changed drastically over time. Instead of just giving positive, neutral, or negative, you now have a more politically correct menu. Which is positive, Report this buyer, or I’ll leave feedback later. Which if you dealing with a dead beat buyer, you have to file a claim, wait four days, and after four days you may get your transaction fees reversed from eBay. But if the buyer is saying, too stupid to check his message box or emails, and keeps buying things like crazy. Then the buyer won’t even know whats going on. and eBay will, in turn, let him happy keep going.

This system gives the buyer total control over ruining the seller, and the seller effectively can’t touch the buyer where the absolute worst a seller can do to a buyer is simply not leave feedback. You either have to leave positive feedback. Or effectively “shut the hell up” because the customer is always right.

Giving the customer/buyer this much control over your system will only breed an irresponsible customer. People who will keep buying things they can’t possibly afford. And if they don’t pay, well! no biggie to the buyer. The seller has to hold onto the item for weeks before even attempting to re-list it again to try to find some buyer who is actually willing to PAY FOR THE ITEM!

I use the title of eBay being like Wal-Mart because Wal-Mart likes to use the slogan “We want to see you smile”. Meaning, that if a customer is in a bad mood, They’ll do everything in their power to make sure they smile. Give them %50 off of their merchandise? No problem sir!

But wait a minute! What if you are already smiling?

Well, you get nothing! Fuck you!

If you are already in a good mood then there’s no need to work harder for you. Wal-Mart effectively breeds people to be angry all the time. Just as When Ebay tips the scales in favor of the buyer. They, in turn, create a market that is no longer sustainable for sellers to do business with them. And Ultimately they’ll walk away and find other resources to go through.

So the next time you see a buyer that has 400 positives with no negatives, you now know why. They could be a deadbeat piece of shit but since the seller no longer has a voice, you can no longer tell the difference between the good buyers and the bad ones.

Click here if you want to go to eBay in the event you’ve been living under a rock for the last 20 years.