The Banana Pi M3 fills us with nothing but contempt.

Ladies and Gentlemen, This may probably be the last blog entry on this site in regards to the Banana Pi M3 and possible ALL Chinese based Pi boards all together!  Read on if you want to listen to this little diatribe of hatred. 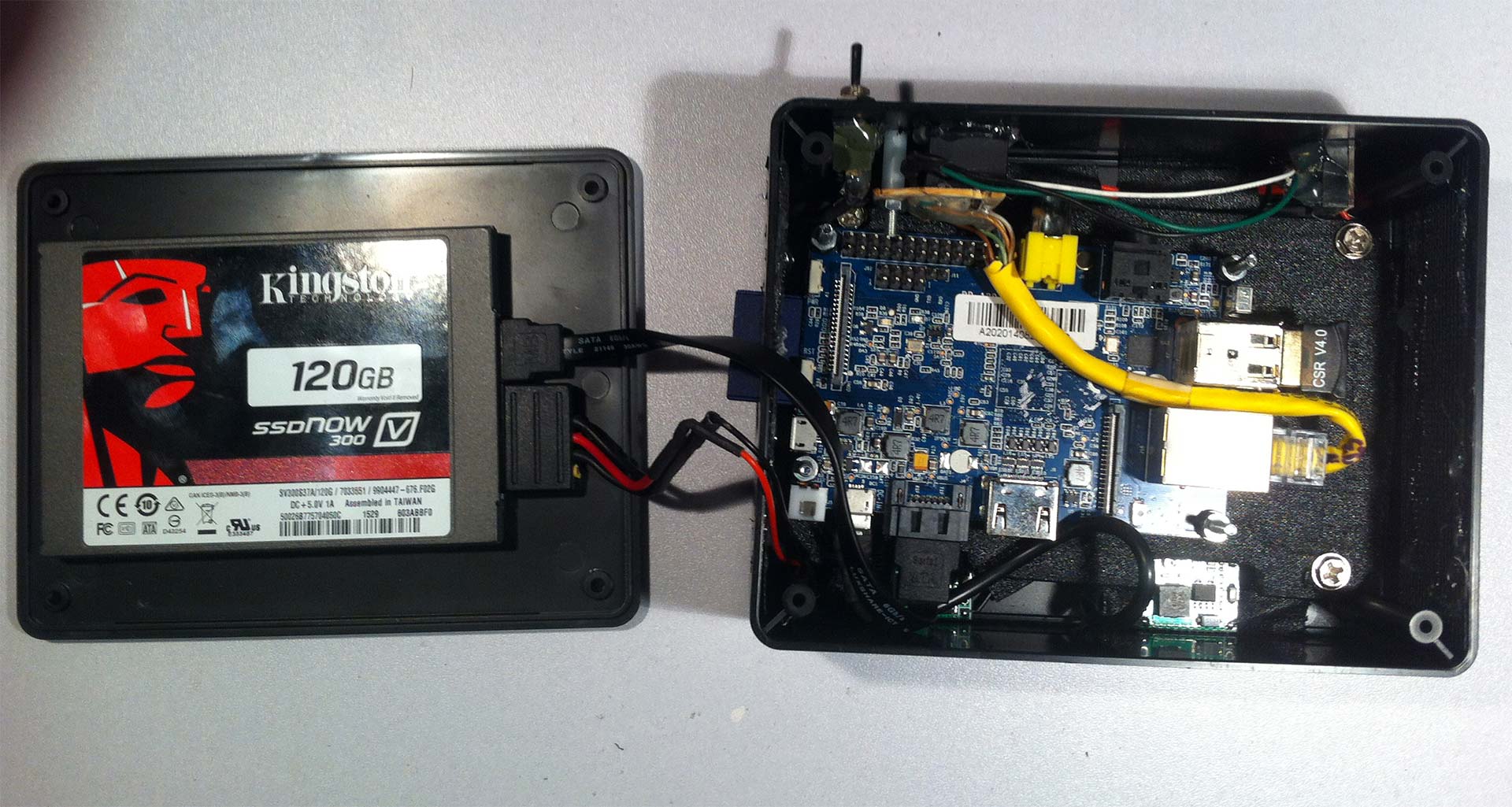 Back when the Raspberry Pi B+ got released and was having non-stop problems with keeping it not only stable but functional enough to use as a dedicated NAS for the house we picked up one of the first generation Banana Pi’s off of NewEgg for around $37.00 (USD).

To us this was considered a steal as we didn’t really care about having a 40 pin header like the Banana Pi Pro. With the Kingston 120 SSD drive installed onto its own dedicated 3amp supply just like what we did in my blog long ago I was able to pull around 132MB/sec off of this drive which is more than enough to pipe down the Gigabit which runs anywhere from 400Mbit to 450Mbit’s per section. This kept up with my torrenting of Linux distros and as a general file share for utilities while reloading laptops over the network. This setup was not the fastest in the world but I was still impressed by what it all did in a pure 0dbm environment. With the black casing, I can hide this in my living room and no one will know what it really is or does.

Time for an upgrade to a faster Banana Pi.

Needless to say, we were satisfied with Banana Pi M1 customers at the time. And it would be nice if something faster came along. Something that really pushed the data back and forth. The BananaPi team was really hyping up their latest Board known as the “Banana Pi M3” and it had everything I could want on it. Great. Faster processor will mean better access time in both harddrive/usb/networks. 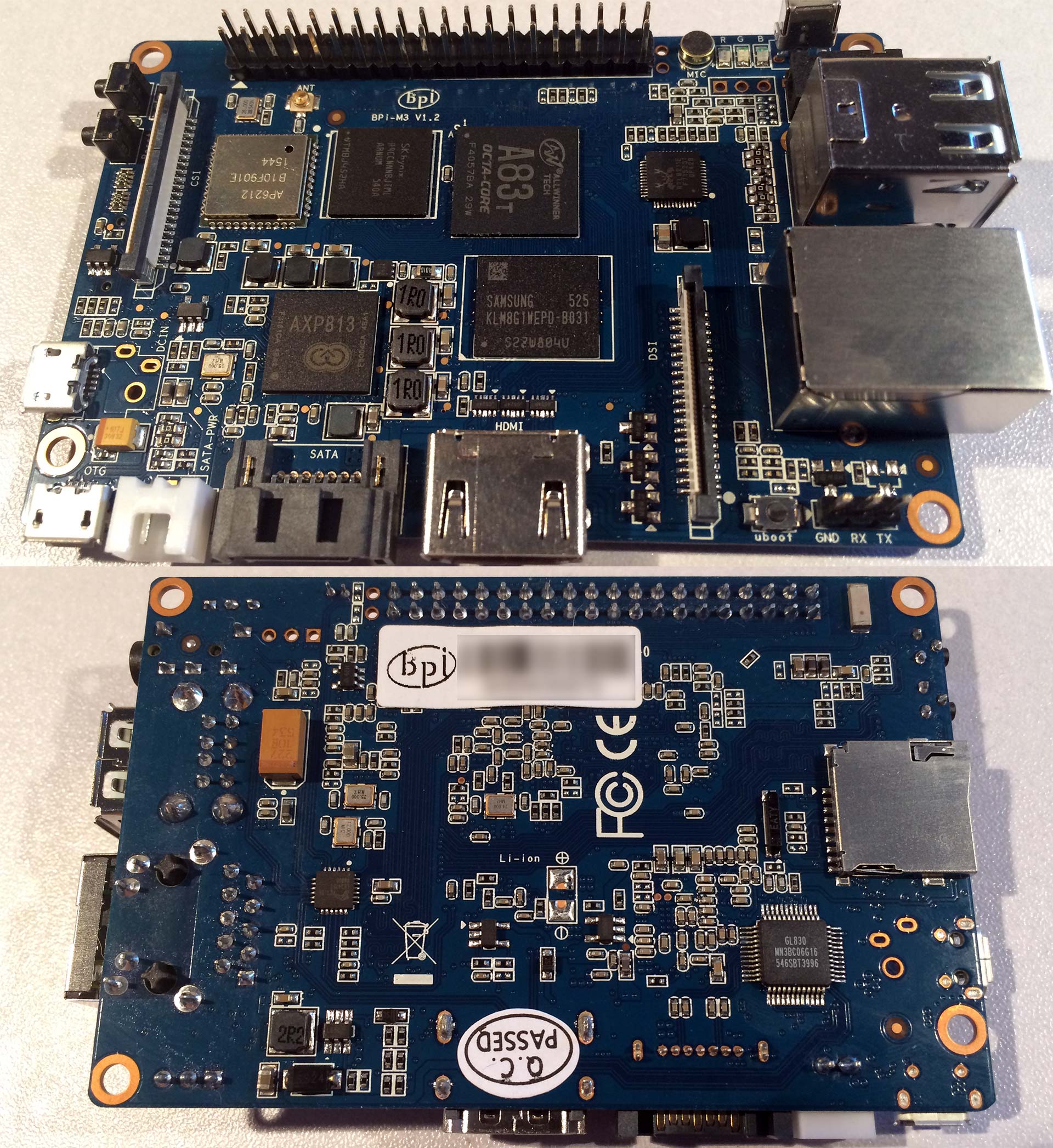 Here it is in all of its glory. I got it in my hands and began loading the software for Debian onto this unit. Right away it powers up showing my 8 cores and then powers down right away. 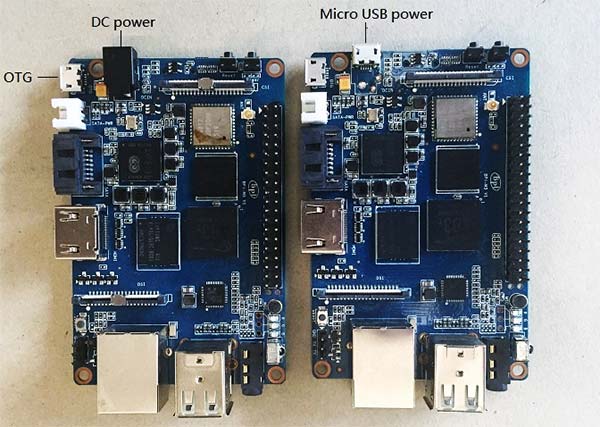 Well! Problem number one is the Micro-USB port. To give the Orange-Pi team some credit they used a barrel plug knowing that the amperage on a cel-phone based USB cable can fluctuate greatly in terms of amperage. Depending on the quality of the cable it can go anywhere from the full 3amps this board requires or sometimes it could drop to 1.2amps causing the board to freeze, lock-up and die.

The banana-pi team must think that everyone has a bench power supply set for 5.10vdc and high gauge wiring for your USB charge cables.

Unlike the Pine A64 they at least placed the extra points for a barrel plug adapter to go on so it’s no problem to wire up something into that port and feed it off of a 5dvc 3.33amp brick supply. After I did that it booted up happily to a login prompt.

Upon hooking a Kingston 120gb SSD drive to my Banana Pi M3 I noticed something that when transferring files from my PC to this brand new Octa-Core unit it’s actually giving my transfer times that I expect out of a Raspberry Pi B+. I was running some disk access tests with the dd command and found out that the Banana Pi M3 has the worst file transfer speeds for a SATA port in all of time!

Well, if you dig deep enough into the Banana Pi’s site reading sub-section after sub-section it begins to explain to you that only the AllWinner A20 chip was literally the only chip with native SATA support built right in. So instead they used a GL830 USB-to-SATA bridge (the chip on the back of the board they talk almost nothing about on their website) instead of simply finding another ARM-based CPU with SATA support built-in.

And the results are…..

The end results are pathetic to say the least. I am getting results similar to the Ambian Forums where I am only getting about 12Mb/sec instead of 130+ like on my original Banana Pi. Upon hooking my western digital external USB drive up to this. I was getting almost double the speed of the onboard chip that Banana Pi Put on at 23mb/sec

The Banana Pi M3 sucks for using it as a NAS server.

Thanks Banana-Pi team. Rather then have some sense of integrity by simply refusing to add the SATA port onto the future models and potentially lose money from people like me which do use your product for NAS-server applications. All of the software development in the world is not going to speed up the hardware choke-hold implicated into the design of this board. Banana Pi may have gotten our money with the Banana Pi M3 board. But people like us aren’t even going to look twice at you when you release your next board.

Just like the Orange-Pi. The A83 OctaCore processor heats up rather quickly and begins to almost immediately throttle itself downward to 1.2Ghz and even turning off 4 cores right away! At this point of the game I minus well just buy a Raspberry Pi 3 because then I at least will have good support to go with my slow processor! Even with adding a heat sink and fan can I barely get it running at full speed underneath the android images out there.

If a company understood that their processor needed a heat-sink in order for it to function reliably then why didn’t the Banana Pi Team provide one? The Banana Pi Team can’t even hide behind the notion that they’re doing this to be the “Cheapest Pi Board” like Orange Pi could because their marketing is all about performance. That their Board is faster/better/stronger than the competition (i.e. the Raspberry Pi) which is why you’re paying more. So I will blame the Banana Pi Team for this mistake at the hardware level. It’s a very terrible but well-deserved mistake on their behalf.

Many companies out there that are responsible for their hardware and knows that their units heat up provide a heat-sink. Shame on you Banana-Pi team for being so reckless in your hardware production process.

For the Banana Pi M3, we were getting minimally better transfer speeds over gigabit at around 570Mbs to 600Mbs. Unfortunately file transferring with things such as Samba or FTP is a single process service and as a result, you cannot use the full potential of your Gigabit network card unless you run a lot of different services at the same time to take advantage of having multiple cores.

Unlike Raspberry Pi and even NextThing CHIP where the 2dbi antenna is on-board the Banana Pi decided to skip that and include an external wi-fi antenna that I guess you would put on the side of your case? Except actually give you an antenna that allows you to screw in and/or upgrade we’re stuck with what they gave us. Once again Banana Pi cheapens out on this part of the process.

The Raspberry Pi was not just a board you were buying, it was also the support of thousands of people behind it. Lets check out some of this.

A magical story of the Banana Pi brothers.

To quote the promotion of the Banana Pi M3 off of their own website which we’ll provide a link here:

The M3 secretly mastered the powerful art of Octa-core to best even the M2. Unlike his careless brother, the M3 did not lose his SATA port.

First off, I never heard of a company trash talk their own predecessor model like that. But you want to tell a story Banana Pi Team? We can do that too!

The M3 may not have lost it’s SATA port but the M2 wasn’t careless as much as it was honest. the Banana Pi M3 older brother is just straight up deceitful! Only providing half-truths to that it can’t possibly attain and being the most corrupt/power-hungry brother in the Banana Pi family that hopes you’ll never read the fine print! The M3 brother is a bit of a hot-head which once he looses his cool the H3 bigger brother comes to a complete idiot making his smallest brother the M1 far more useful then he will ever be for the remainder of its life.

Yeah, I think that covers it.

While checking out each and every one of these problems mentioned in this blog on their forums. There were many threads talking about all of the problems above. With every thread, I encountered some very brutal replies from the Banana Pi Team. Telling people to shut up and support them or go away. Wow, okay then!

I can’t even tell you guys that this board is good for standalone headless server work. Perhaps if you drop a giant heat-sink onto it and load a headless blender for network farming sure but there are far cheaper units to do this with such as the Pine A64 if that’s the direction you want to go. It’s nice that it is one of the few boards that comes with 2GB of ram. But that isn’t enough to save this unit from a hardware perspective. This board feels like it was designed for a cash grab to take what few loyal customers from the early days of Banana Pi with the A20 processor and totally scam them of all of their money on the M3 edition boards.

These are my opinions and findings and mine alone. Facts are subject to change based on the progress of software/hardware development. If it makes at least one person think twice before an impulse buys and takes a hard look at these Chinese boards before buying then it is considered a mission success story to us. Look at the community, see the problems out there, look at the hardware. Understand that just because it has the word “Pi” in it doesn’t mean it’ll be as great as the original. Especially if it’s a fraction of the cost. Give support to companies that truly want to earn your support instead of demanding it. That’s all we have to say.

6 thoughts on “Banana Pi M3 – How to make loyal customers walk away.”