Stream into the abyss.

Description: Twitch Stream 05-02-2020 – Streets of Rouge – with FunkyJoe and Discord company on https://www.twitch.tv/s_config/ more info down below.

To whom it may concern:

In order to be a reasonably competent blogger one must try new experiences. On this page we challenge ourselves and ask if we can be a good streamer. Now, most who jump into the business of online streaming especially what I’m doing which is video games do it just to chill with their friends with the hopes and dreams of eventually being compensated for what they love to do which is to play video games while talking to people. For those who are making it and living the dream then congratulations onto you.

We here at s-config stream for a more scientific approach. One of the things that you do when you press that magical record button is that eventually you must hit the play back button. Try not to cringe at hearing your voice echo back into your skull through the modulated baud-cast net cyberium. Listening to ones previous recordings turns into a pivot-able moment of education. Why are people only tuning into your stream for a few seconds and running for the hills? Pressing that play button on what you’ve already recorded now places you in the listener/watchers shoes. If you were a watcher would you tolerate this hot mess?

In essence, WE become the “Stream Coach.” not some bizarre ponzi scheme provider.

Now for those who have read these blogs. We’re not necessarily big fans of Twitch, nor of YouTube. But we have not found a good way to stream our gaming experiences on this domain (At least not yet.) So, until we get our shit together with the mad scripting we suppose we should start off like every other “schlub” on the web and just go to Twitch and smash that record button. But why not use the recorded videos button you may ask? Well, there’s a few reasons to that!

As I’m not a pro-gamer but instead a blogger and repair tech. Many of you will probably laugh at the rig. But here goes: 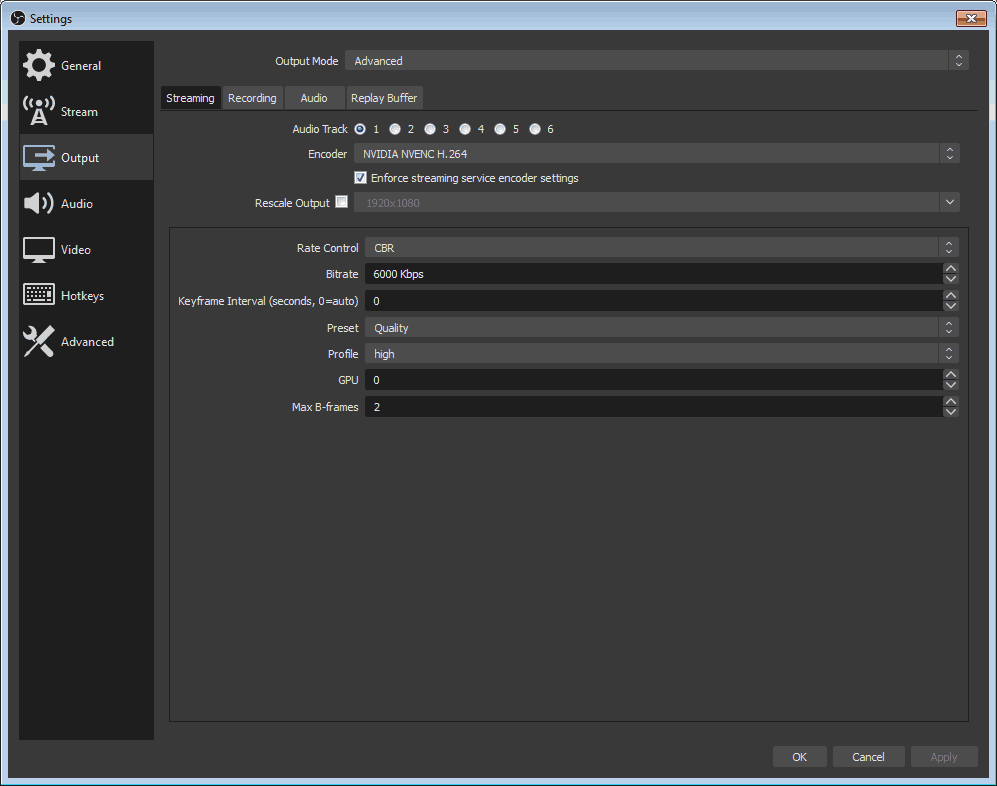 Now, for streaming I went a little on the aggressive side and choose to output 6Mbs streaming because we’re blasting out at 1080p and at 60 frames per second. Upload stream is probably the biggest roadblock to a lot of streamers and until we can get some hardware encoding for VP9 support this roadblock will be around for a long time. Going down to just 4Mbs caused high action scene to block out badly. 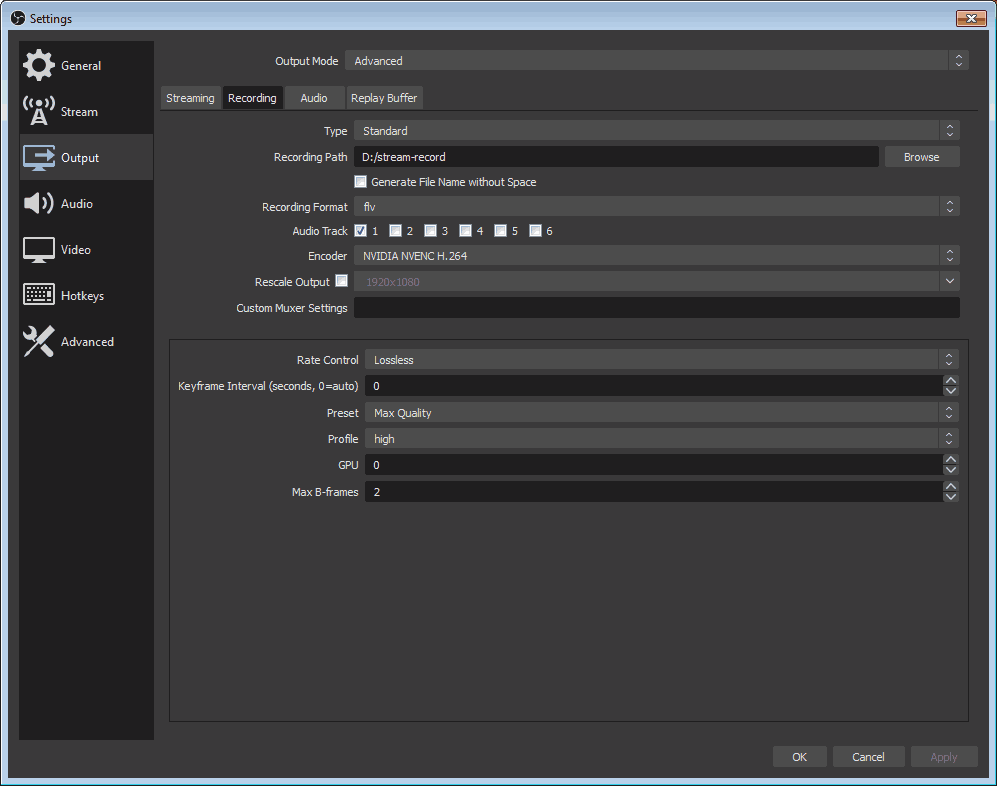 Since we were streaming at 60fps 1080p it’s only fair we should adjust our recording settings to suit. Now, when we streamed a long time ago we left the recording format in MP4. That was a big mistake. While MP4 is great for recording short bursts like how some of our tutorial videos operated on the network. The MP4’s corrupt during longer recording sessions. Especially streaming because there’s a game that is eating up almost all of the resources plus streaming plus you’re recording at the same time. Phew! That is a lot of shit for a poor GeForce 1050Ti card to perform! But I do like my 1050Ti because it’s dead quiet and it’s 75watts so we’ll take the hit in frame drops.

FLV is a more suitable format to work in because even if frames start to drop the recording does not corrupt. 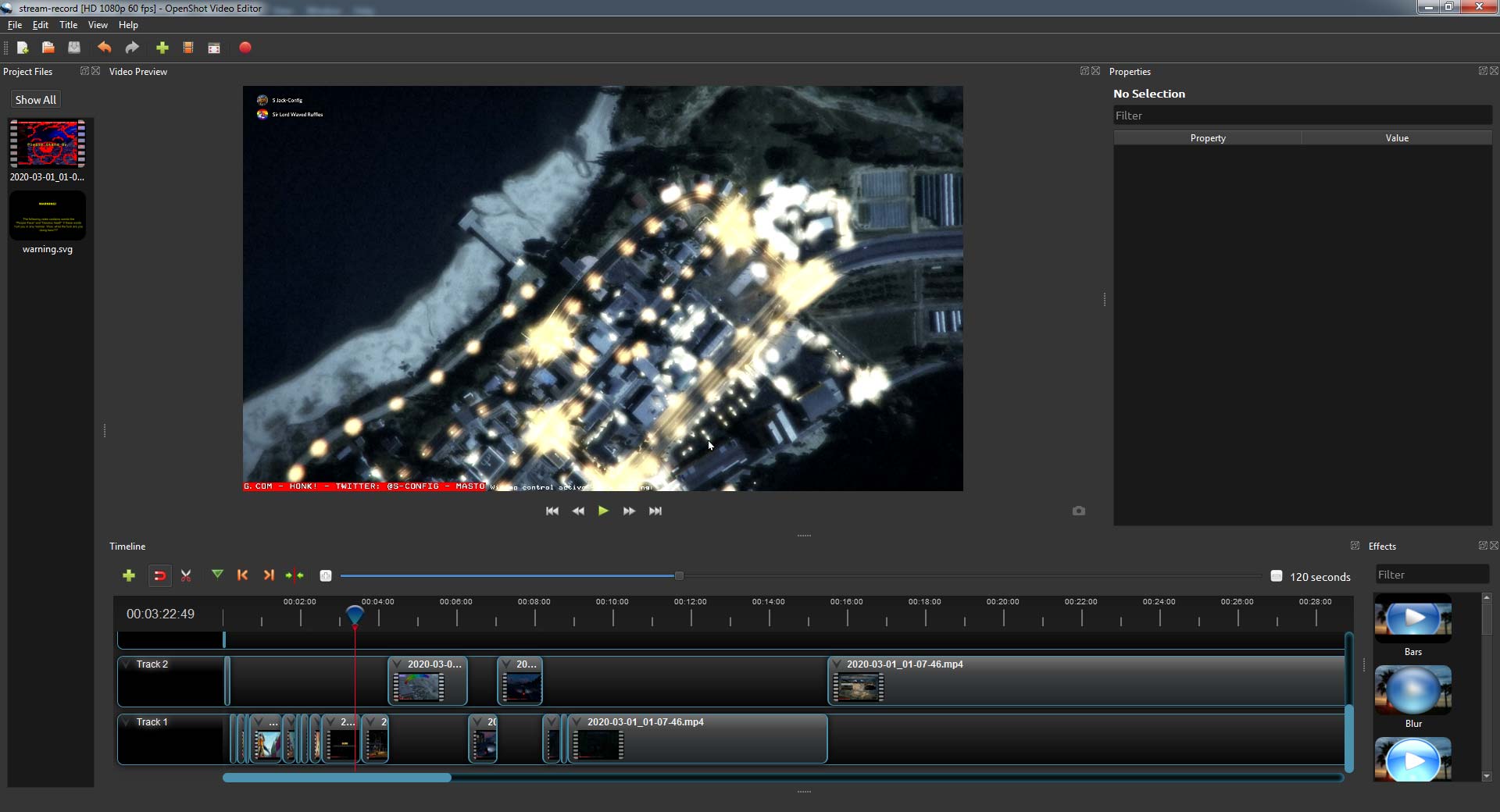 Now, we had to edit this video because there was a critical mistake for streaming especially with GTA5. Which is you’re supposed to load the game BEFORE you hit the stream button! For those who never play GTA5 the network mode is the most maddening experience because it can take up to 15 minutes in order for you to join a server with a handful of people running around the city. During this time we’re effectively recording a slide-show of GTA characters. This probably drove people away from my stream but it doesn’t have to drive people away from the recorded video!

For some post production i used Openshot video . Which is perfectly fine for importing FLV files. However it was given me troubles with the FLV causing my editor to lock in mid-edit which means I had to convert the file to something a little more usable.

A little bit of FFMpeg action was needed.

With a little bit of help from our 75 watt little GPU that could we were able to re-encode this video to MP4 in about 30 minutes even in two pass mode. In the future we’re going to try lossless to see if that improves our video quality on the final render.

We really only edited the beginning of the stream when nothing was happening (or there was a point where we were trying to get our motorbike for 20 minutes. Ugh!) beyond that the footage there-after was completely raw.

Afterwards I re-save the edited video as a 25Mbs master. Now, i’m not feeling that because the video size is still around 24GB in size for just under 2 hours of video.

We need to make it smaller. I passed a similar command to the one above in FFMpeg.

Unfortunately, it resulted in a file size of about 4.7GB. More drastic measures had to be taken.

2.2GB isn’t great but acceptable to upload given that it’s almost two hours long. But holy hell that took almost 5 days to encode! Guys, if you know of a better way of doing hardware encoding with VP9 drop it into the contact us area. We would love to know!

Okay! I changed gears on how I encode WebM because we were getting artifacts in our render process. So after a little bit of reading Google managed to publish their test results on how to encode video similar to how YouTube does things. I got to say the flags they presented for 1080p 60fps are really solid and worked awesomely for encoding this. During this publication we’re experimenting with -quality best to see if it really does anything in terms of performance and bandwidth. Also, we’re probably going to re-add the -b:a 96k to libopus since most modern browsers can handle libopus with ease. 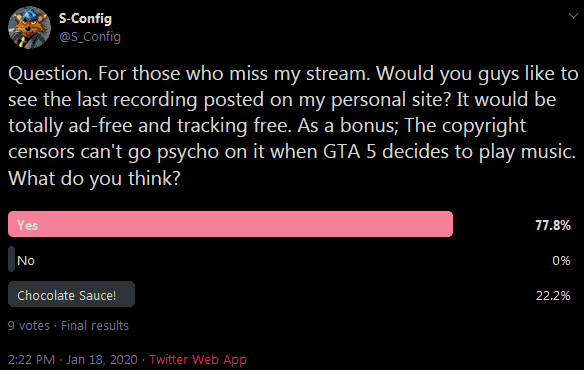 To those who voted on my Twitter. Thank you so much for your overwhelming positivity. For the 22.2% that wanted chocolate sauce. I have not forgotten about you.

For those people on Mastodon hey! We tried with you guys! We really did! We thought we followed and built a decent community there. Guess we were wrong.

Overall, we’re not terribly worried about the size because usually people don’t watch pre-recorded streams that often. The only time they’re watched is to get a good idea what kind of streamer a person is. So for those who were wondering and lasted this long through my diatribes of text

I would also like to Thank FunkyJoe for allowing us to record the discord stream. Just me when I say that next time we’ll try to adjust the volume so you can hear those guys better.

Until next time, may server protect you.