A long time ago in Purple Bed ordering.

Once upon a time a giant Binturong decided to place an online order for a purple bed. This was sold to the creature by a princess which has a bizarre fetish with slamming eggs into her bed with giant sheets of glass. There was no need to kink-shame as this is the year of progress, love, and cyborg terror-bots. This Binturong bought a new bed because sleeping on a futon was all well and fine in his young college years. However, it is time to move on to better things. Sleep is important for everyone you know!

With a flick of plastic, the bed was ordered from the princess as of November the 16th. The bed arrived on November the 26th by a very angry Fed-Ex man that decided to throw the bed into the garden of his enclave living quarters. Luckily it was winter time so all of the flowers are dead. As you can see, it was packaged very well to survive the trip and the Bintruong was able to drag it up the stairs because 111lbs mattresses (queen-size) aren’t a problem!

It has arrived my purple mattress!

But there was a problem you see! Although the princess kept her end of the deal by delivering a mattress. There was one more very important item to make the bed complete.

Although Binturongs are creatures from the far eastern hemisphere of the world. Placing a bed on the ground within an American tree-home makes people draw conclusions about you. Words like “Train Hobo” and “Trailer Trash” come to mind for me right away! It’s freaky enough to be sleeping outside of a tree. Sleep on the ground and you can get eaten alive by zombies man! Not cool!

So the binturong is sleeping on a Futon still with the Purple wrapped up in my bedroom as you see it pictured above. Because as we are approaching 10 business days there’s no progress on getting a frame for the purple bed. Upon Filing as help-desk ticket promising to get back to us within 24 hours on November the 25th. The frame has not even been processed and the help-desk ticket remains unanswered all the way up to November the 28th.

The free seat cushion that is supposed to come with the queen mattress is shipped today! That’s progress, right?

Well, not really. As nice as it is to get the seat for free. I’d rather get a Purple Pillow for free like the buyers on Black Friday got. But oh well.

So the binturong went to work questioning the Purple company as to where the rest of the product is to get the complete bed setup. This was their reply:

Hi S,
Due to the holidays items are shipping a little bit slower than we initially hoped for. I am going to put your orders on a priority, once these items ship we will send a confirmation to your email.
Sorry again for the delay. If you have any questions feel free to let me know!

Afterwards we received another email: 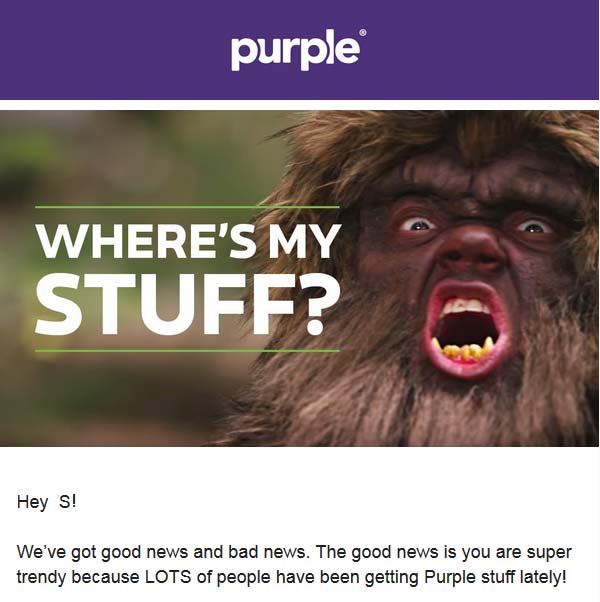 To which if you go check out their link for details it reads the following on ETA times:

Purple is still operating as if they are in their Kickstarter phase with delays in even their future product while other companies such as Casper and Ghost can deliver to you everything you need within 10 days! At this rate, I guess this binturong is lucky to have received the mattress and seat cushion in such groundbreaking time. As for all of the black friday orders, so much for having a bed up by Christmas eve!

This story mirrors itself with others in purple bed light.

Somewhere on freskdesk.com servers is where my helpdesk ticket went to. upon following links and resetting my password the binturong stumbled across a forum of people also missing their frames for their mattress. Obviously not alone in this ordeal.

Some of the people are reporting that they will begin shipping said frames by November 30th. It’s only a few days so we’ll just have to wait and see! We’re pretty sure that since the data goes off to this “freshdesk” site that none of the complaints are really connected to Google and due to the login only system there’s no way for the Google Bots to dig in and find out all of the potential problems people are having with their Purple Mattress (It’s mostly missing bed-frame complaints!)

Update December the 8th – It all finally arrived. 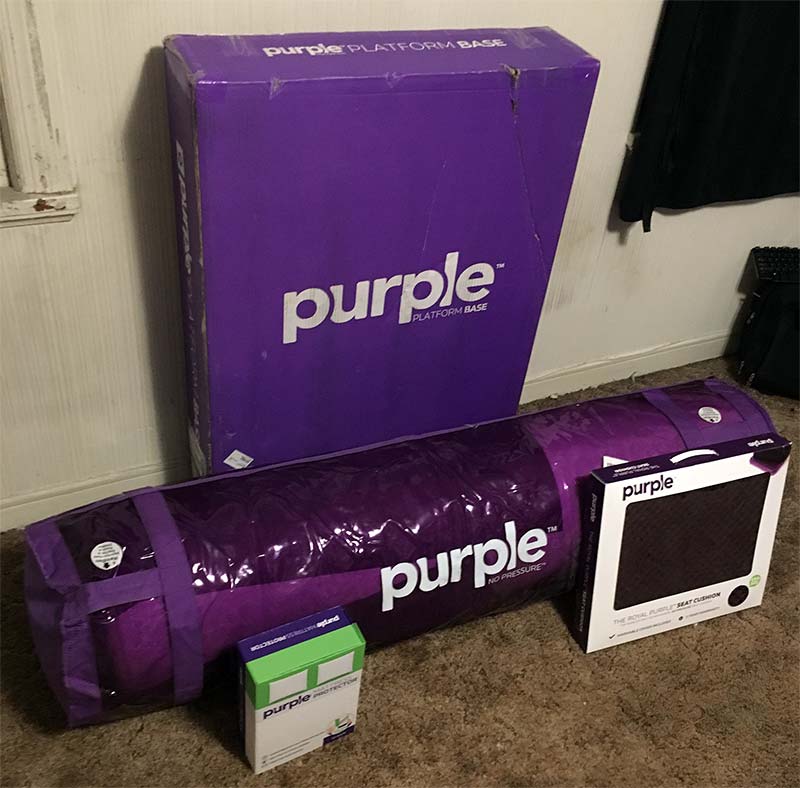 With much joy, everything finally arrived at this Binturong tree. This time around the FedEx delivery driver did not throw it into the garden but instead rang the doorbell and swiftly got into his van driving off before I could come downstairs! Carrying such things up to the second story was cumbersome. However, it wasn’t impossible like a traditional frame and mattress. Even the sheet protectors arrived. It took a grand total of a month to finally receive everything which is faster than the estimated times in their posting. But still slower than the estimated times of other mattresses for similar products.

Welp, Lets get started with assembly 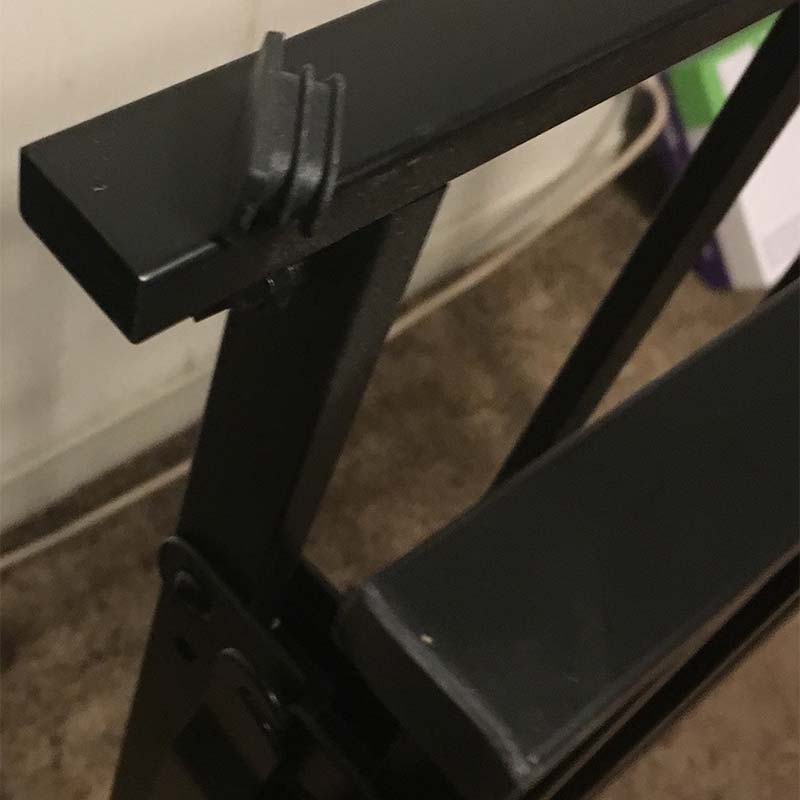 Upon inspecting the box I could tell that it’s been through a war on the FedEx drivers van. And upon opening my box I found that the end-caps for my queen-sized frame were somewhere at the bottom of the box instead of epoxied into the frame. If those end-caps go missing off of this frame then the “amazingly quiet” bedframe will probably have the clacking of metal going for it whenever you decide to take a running dive into bed. 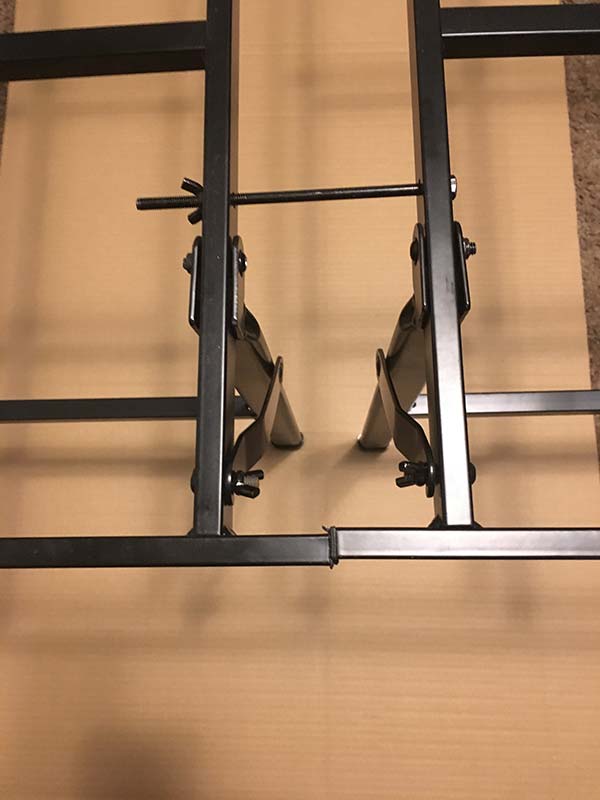 Unlike the king-sized purple frame which they show you in their YouTube video and advertisement with having a joining mid-section that supports the strongest sections of the frame together. The queen-sized model relies on these two very long bolts to hold the two sides of the frame in place. The end result is what you see above where the two sides of the frame will never mesh up and the bolts are visibly warped from the strain and stress of holding the frame together like this. For a frame that can claim to hold up to a thousand pounds I serious question the structural integrity of this frame if you push it to it’s maxed load straight down the center. Or perhaps even standing on those bolts!1

A simple metal sleeve with four smaller locking nuts at the ends of the frame would’ve proven a far superior and professional look versus the two bolts. What a shame really.

The material behind purple. 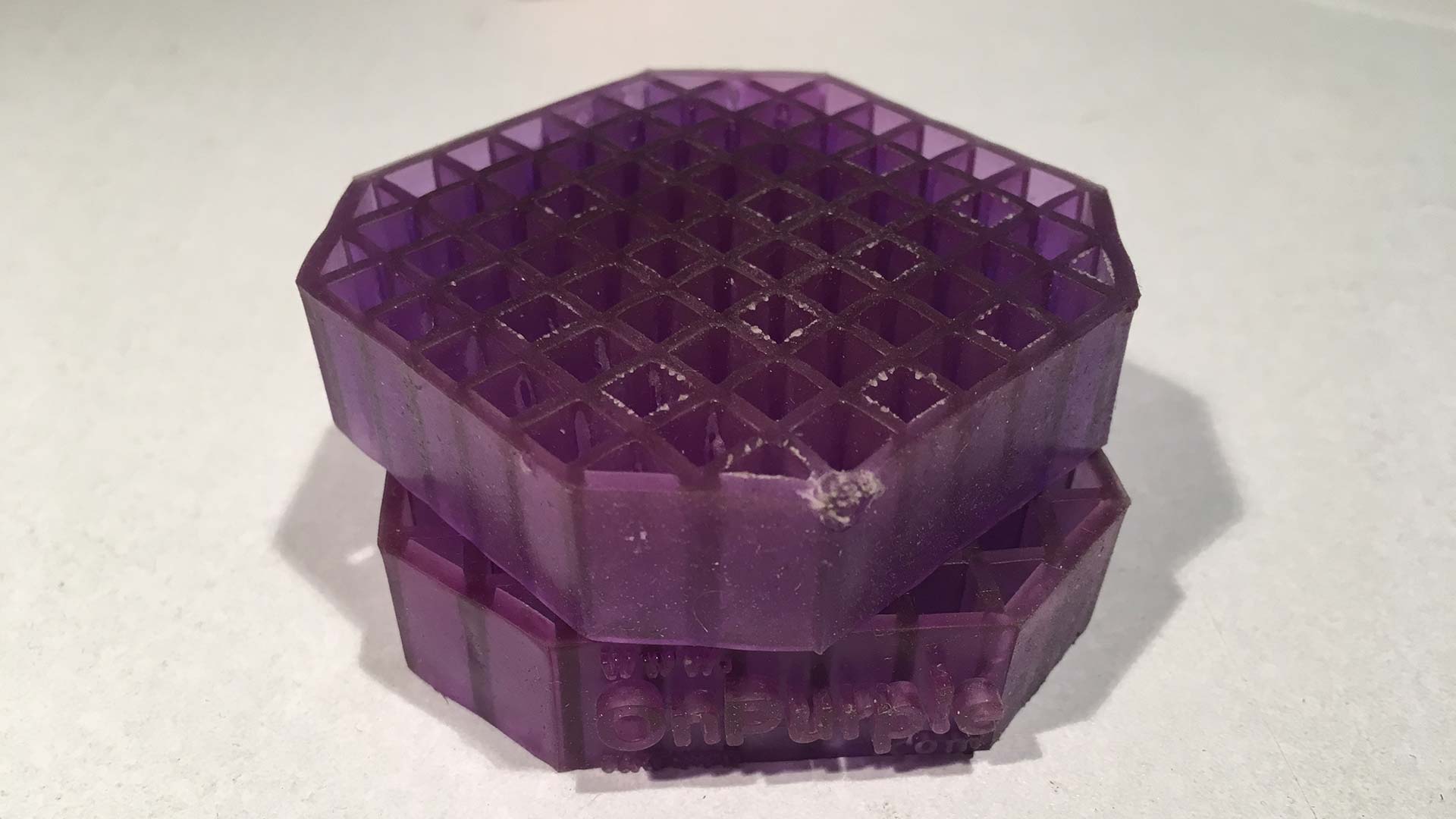 Between the seat cushion and the samples that are included with your bed. Purple is more than eager to show you the material that is used in their beds. Upon picking up and feeling this material suddenly brought a sense of Deja-Vu. This binturong has felt material like this before! It doesn’t feel like a Dr. Schols gel pad as those are too rigid! You don’t go through the anthropomorphic animal kingdom for 20 years and not know what this is! That this is something that only the most corrupt of minds such as ourselves would draw a conclusion to.

It feels like a Bad Dragon adult toy! Well! We almost like it! Bad Dragon toys don’t peel when they get dry like in the Purple Sample Picture above! So in effect, the material used in the purple bed is roughly the same material used for making lower-quality adult toys. If you don’t know what I’m talking about feel free to Google “Bad Dragon”. Just don’t forget to tighten those adult seat-belts prior to doing so!

In effect, what purple did IS revolutionary by taking a material that was used for the bedroom and re-purposing it for the actual bed itself. Also, if this is true then this can easily justify the cost as to why the Purple bed is a higher price point from 200(USD) to 400(USD) then other memory foam mattresses.

This blog is not filled with bed experts. Starting from sleeping on a futon with less than 3 or so inches of compressed material separating our bones from the lattes of the wooden futon frame to a queen-sized memory foam/gel mattress. In effect, ANYTHING is better then what we had before. But given the type of fandom we are into we have stayed at many hotels throughout our time. It does not measure up to an adjustable Sealy posture-pedic mattress weighing in at almost $4,000+ (USD) that you would find in higher-end hotels like Hyatts and Marriotts. But it’s better than a Serta mattress that you would normally find at a La-Quinta. So the price-point to comfort we consider as really good! 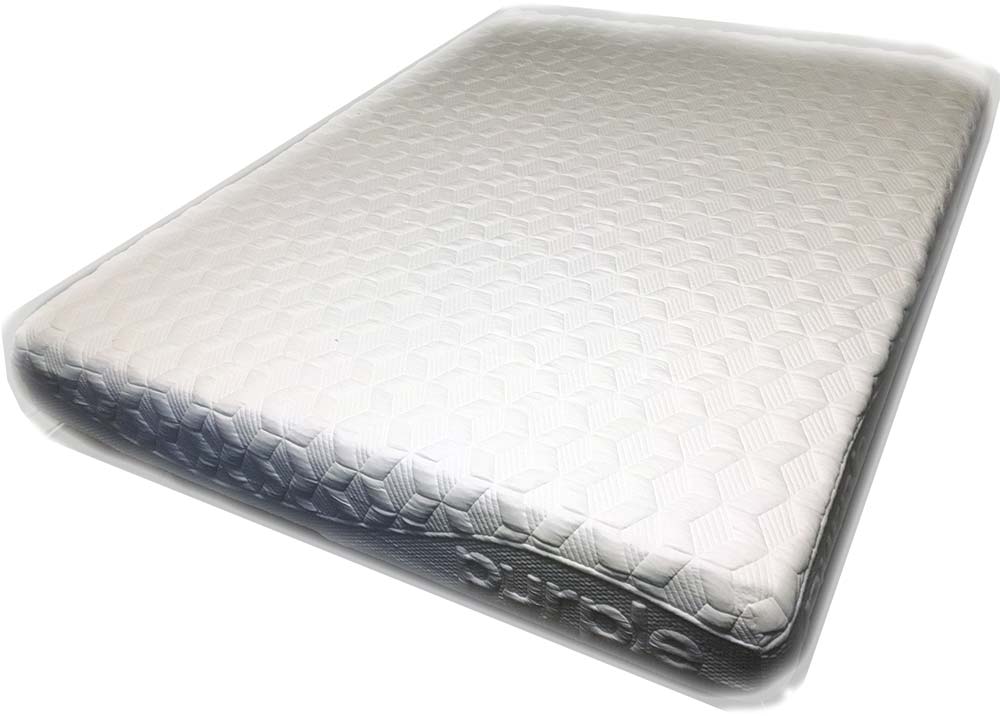 It took us about three days to get used to the gel-style mattress as it does have a feeling unlike any other mattress on the market. Also, unlike memory foam mattresses where it can take seconds to return to a flat shape the Purple springs back into shape instantaneously! It’s too soon to tell about the longevity of these types of mattresses.

Internet order mattresses are the future especially if you are not dwelling upon the ground floor like this lowly binturong. It’s ultra-light (sometimes a little TOO light, the bed slides off the frame if you take a running jump at it!) and although the price may be a little high (We spent around $1,500 for the bed, frame, sheets, etc) it is worth it in my book. 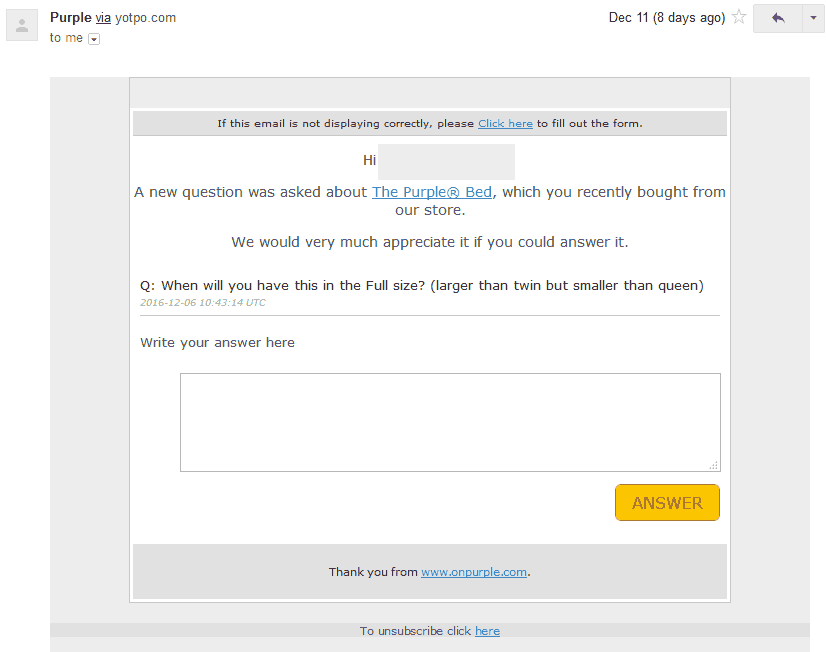 First off purple. Shame on you for signing me up to a third party marketing campaign like yotpo.com where my information gets distributed to other spam systems. Second, the following question is asked by the community.

When will you have this in full size? (larger than twin but smaller then queen)

You know, that’s a good question that really shouldn’t go off to other end-users of the Purple mattress. We have zero control over what happens at the production plants in Utah or how things are working logistically.

I don’t mind follow-up e-mails asking how is the product that we dropped over a grand on. But this Yotpo site is kind of stupid.